The Trail to Grey Owl’s Cabin in Riding Mountain

I had never heard of Manitoba’s Riding Mountain National Park until I was designing our American Safari itinerary. All I knew about Manitoba was that you could see polar bears in Churchill and you could swim with beluga whales.

While researching Riding Mountain I came across a page about the wildlife found in the park. My eyes stopped at one word in particular: wolves. Wolves! Digging more I found a research paper with the location of the wolf pack territories within the park. And it was while doing that research that I found a map with all the hiking trails and points of interest. I could not believe my eyes when I read Grey Owl’s Cabin Trail. I didn’t even know that Grey Owl ever lived in Manitoba. 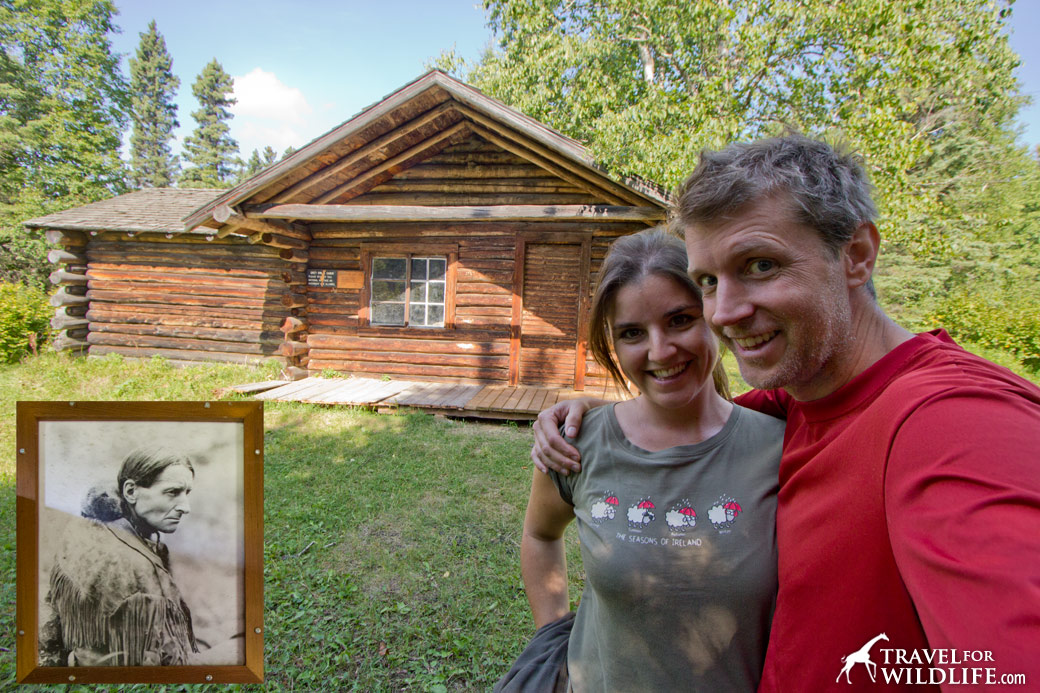 Who was Grey Owl?

I have always admired Grey Owl since as long as I can remember, yet sometimes it seems that I am the only person who has ever heard of him. Trapper turned conservationist, Grey Owl was born Archibald Stansfeld Belany in England. Seduced by the outdoors and longing to live in the wilderness he moved to Canada and posed as a native American where people knew him as “Archie” Grey Owl.  Known internationally for his work as a speaker, author, and conservationist, Grey Owl was hired by Canada Parks as the “caretaker of park animals at Riding Mountain National Park” in 1931, when he was 42. His specific goal was to re-introduce the long-persecuted beaver back into the Canadian wilderness.

Grey Owl moved to Riding Mountain with his companion Anahareo and their two pet beavers (Jelly Roll and Rawhide). The summer of 1931 was an extraordinarily dry one and the land proved to be unsuitable for both the beavers and for Grey Owl (he wanted to be able to travel by canoe). They relocated to the Prince Albert NP in Saskatchewan where Grey Owl was able to use his canoe and to reintroduce his beavers, who soon built lodges and spread throughout the park. This is why I was so excited to hike to his cabin. It was a rare chance to catch a glimpse into the life of a great naturalist and conservationist. 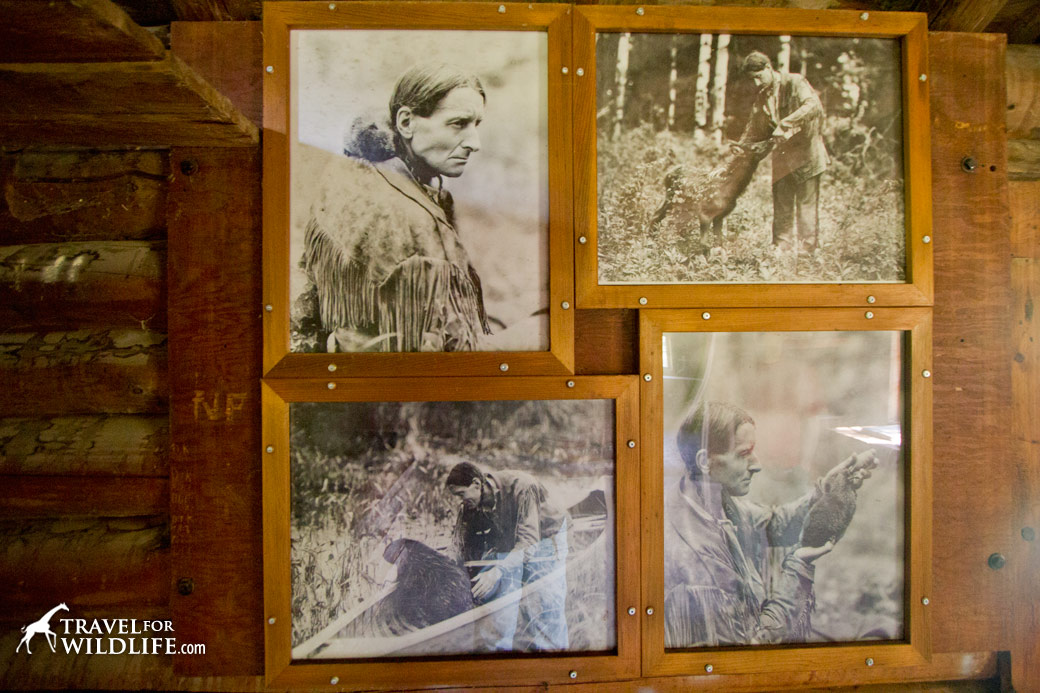 Want to learn about Grey Owl the easy way? His life was made into a film (titled Grey Owl) by Richard Attenborough and starring Pierce Brosnan.

Truth to be told, I am not a hiker. I like to wander around the woods and sit and listen to the forest, but that does not give me “true hiker” status.  The round trip to the cabin was a daunting 11 miles and it sounded like a lot of work for a hot sweaty summer day.

But when would I have this opportunity again?

So armed with bug spray and water we set off early in the morning to avoid the midday sun. 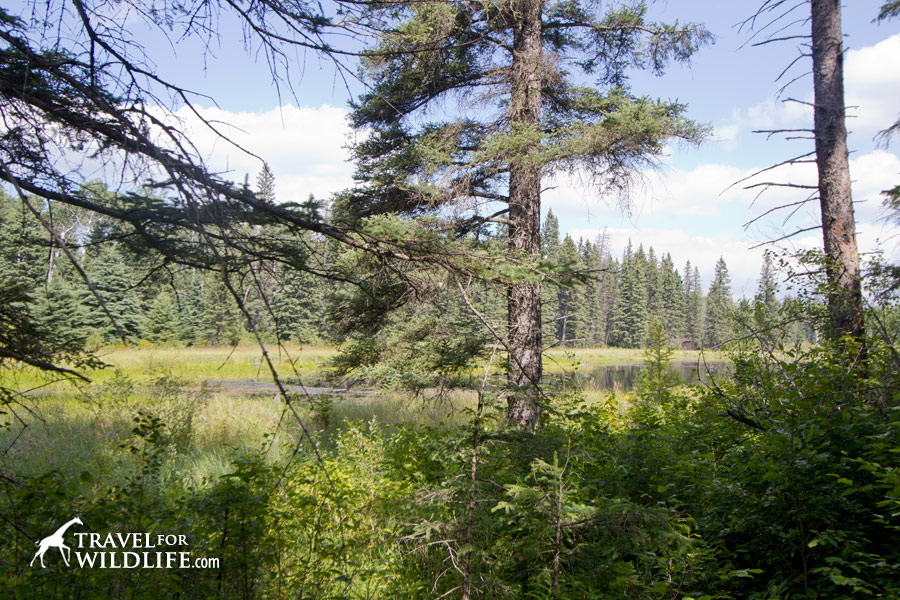 Scenery along the trail

We moved faster than expected, hopping carefully over the tiny frogs that crossed the trail and always trying to stay one step ahead of the cloud of mosquitoes. In no time we had reached the warming shelter, and we decided to step in to momentarily avoid the blood-sucking hordes. It proved to be a pleasant, mosquito-free retreat. Two benches, a stove, a guest book, and a broom decorated the dark room. Outside, a bunch of firewood sat ready to welcome the white winter and the people who might need shelter during their cross-country ski and snowshoe outings.

Having recovered from our mosquito attack we decided to carry on and get to the cabin, just over 3miles away. It would be perfect for a lunch break.

The trail is not great for wildlife spotting. It is walled in by tall bushes and trees which made me a bit nervous. If we encountered any wildlife, there was no place to go. No escape route, for us or them. After all, we were hiking in mountain lion, bear and moose habitat. I am not concerned about wolves, they’ll see us before we see them and they’ll vanish like ghosts.  We started talking loudly to warn any large creatures that we were approaching. 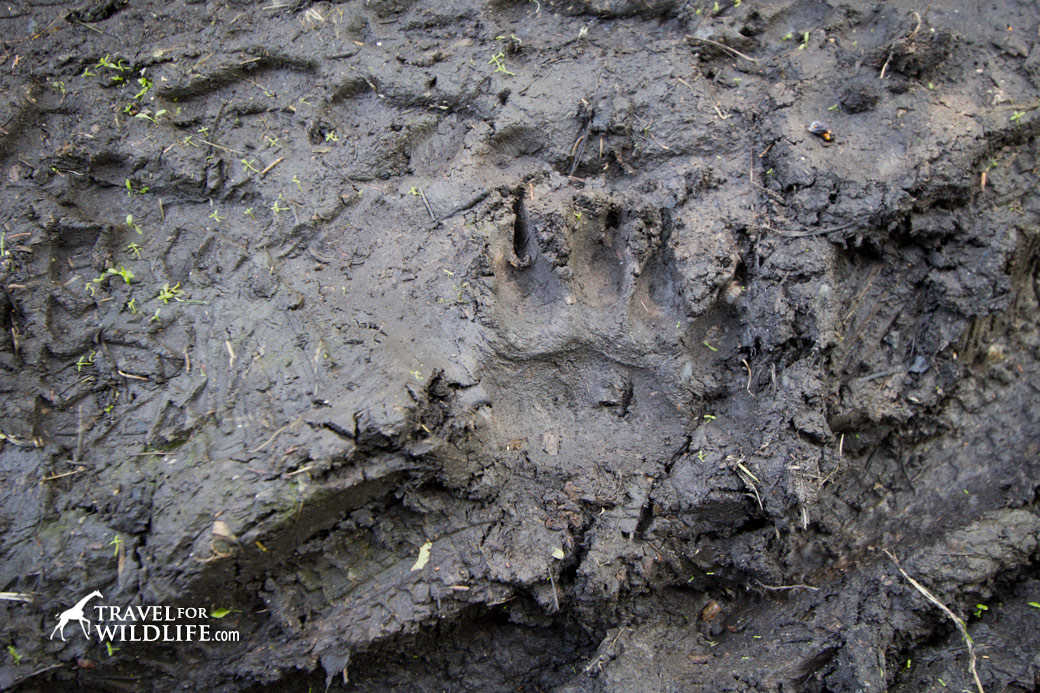 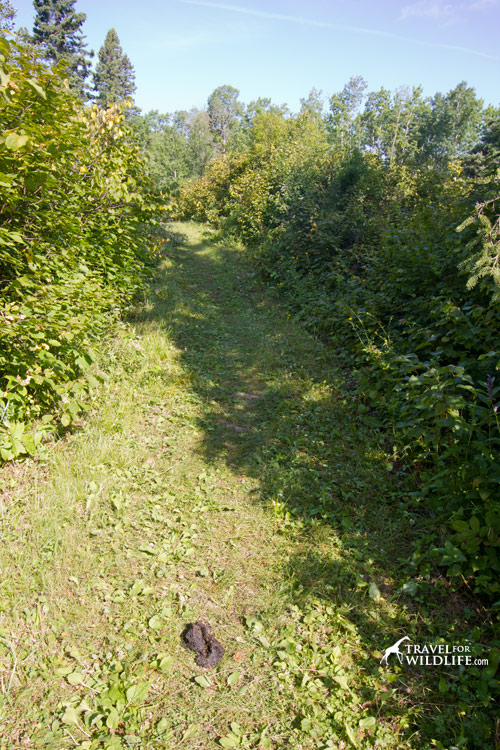 Wolf scat on the trail to Grey Owl’s cabin

Along the trail we constantly saw animal signs, reminding us of what a wild place we were in. The most impressive was the claw marks of a large black bear high up on a tree, where you could see each claw perfectly. That is always an impressive sight to me. We also saw our first moose track.  The animal had been evading us throughout Manitoba and had been walking right here along Grey Owl’s cabin trail this very morning. But yet, we did not see it. 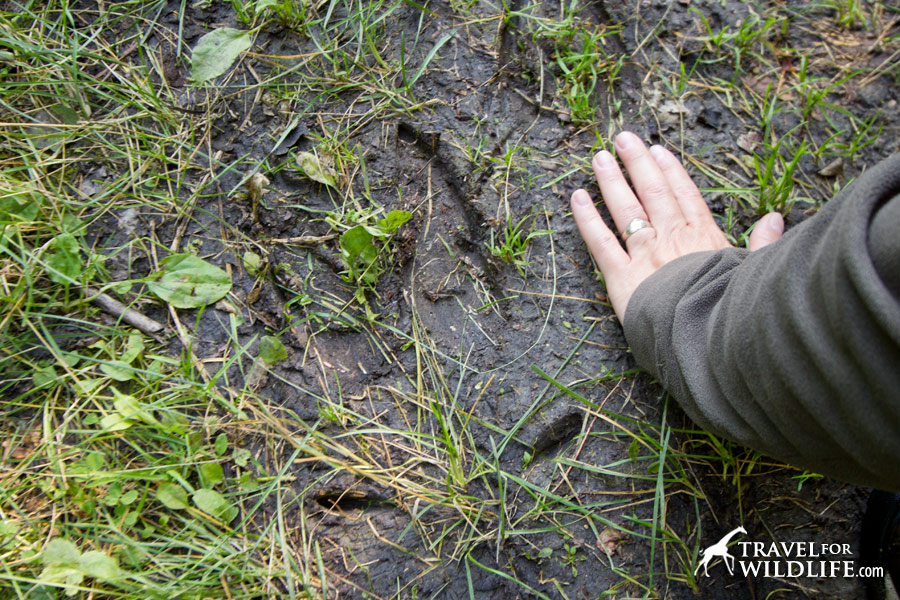 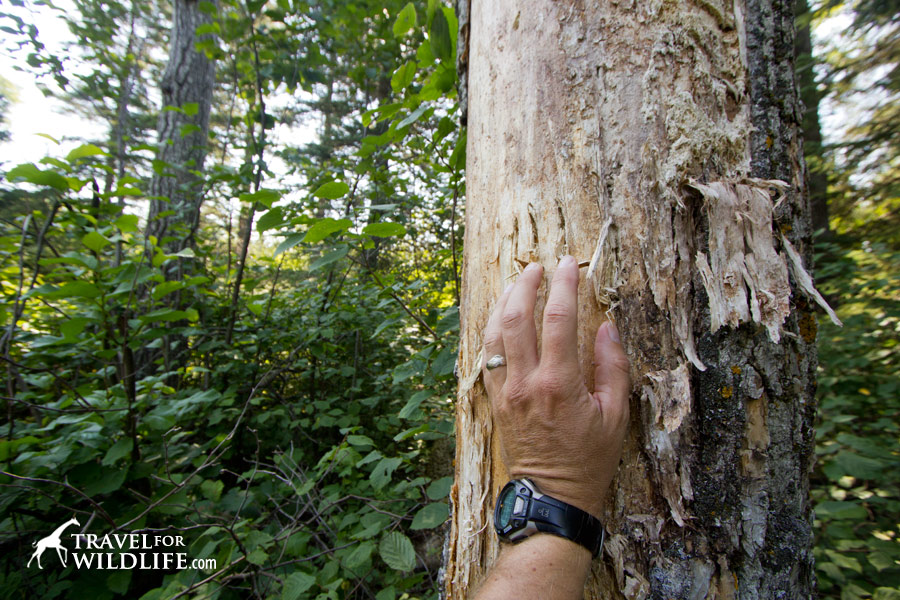 Bear claw marks on a tree

Arriving at Grey Owl’s cabin gave us a feeling of achievement and I was surprised to discover how well-kept it was. It was a sturdy and solid log cabin, bigger than our house in North Carolina (our house is very small). It sits on top of a little hill surrounded by trees. Somehow I imagined it sitting by a little lake. No views of glorious mountains either, just dense weeds and trees. But we did find a little lake behind the trees. I then imagined Rawhide and Jelly Roll carrying twigs along the waters and playing together as beavers do.

Remains of the beaver pond where Rawhide and Jelly Roll played

We entered the cabin and I smiled. “It’s so cute!” I wanted to move in right then. The cabin had two rooms. The main room had a desk, an oven and what appeared to be raised beds, like the second floor in a loft. The other room was smaller with some shelves. The toilet was an outhouse in the back of the cabin. A new outhouse had been built for hikers to use. It looked like a mouse rave party had recently taken place with finely shredded toilet paper scattered all about. 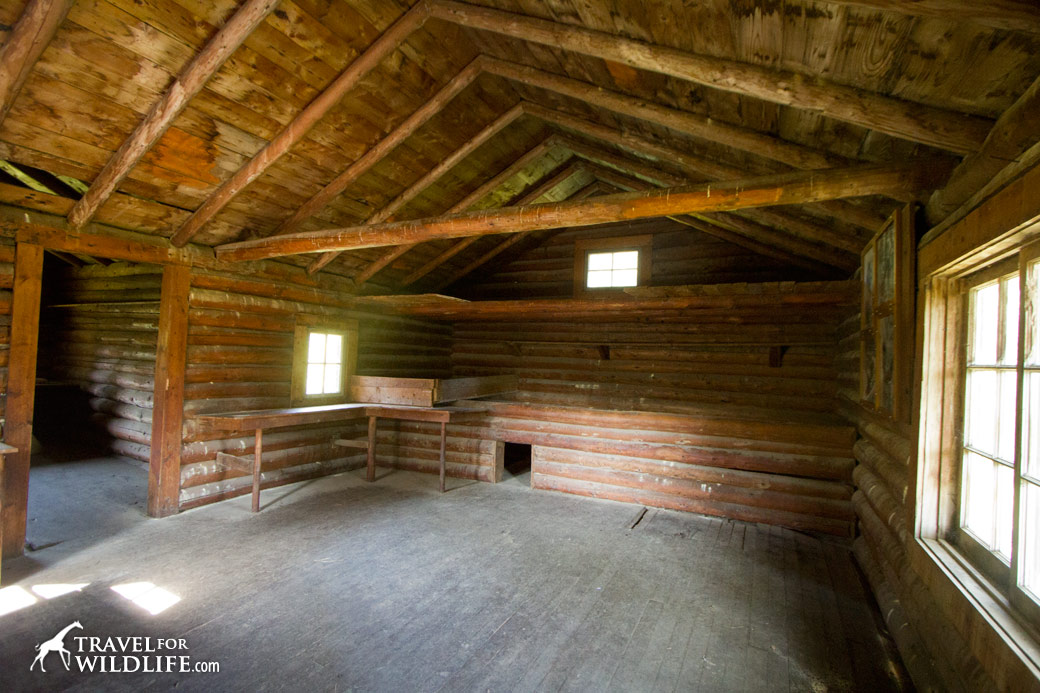 Back in the cabin, Hal wrote on the guest book. “So cool to be here!” Next to the guest book, another book sits filled with newspaper clippings, official documents, and correspondence from the 30’s documenting Grey Owl’s short stay in the park. It is a fascinating read.

The greatest feature of the cabin can be found in the back wall. We discovered an opening slightly larger than a cat door that allowed the beavers to come in and out. I peeked in and imagined the beavers bringing in twigs to make their lodge beneath Gray Owl’s bed.

I was surprised that Riding Mountain displayed so little information about Grey Owl.  Their visitor center does not offer any kind of information about his work or his time in the park. The gift shop has some Grey Owl postcards, but when I asked if they had any of the books he had written, I was told to drive to another town to find them. Sadly, he is often only remembered for impersonating a native American and later being uncovered as an English man. But his work and his message still stand tall. And I was honored to have visited a place where he and his lovable beavers once roamed.

[box style=”quote”]Remember you belong to nature, not it to you – Grey Owl[/box]