Pictures of Animals Beginning With E

If you’re trying to make your own animal alphabet, then you know it can be tricky to think of animals beginning with e. Of course you came up with animal names like elephant and eagle, but did you think of the emu?

To help you create your animal alphabet we have made two lists to get you started. The first is this gallery of 28 photos I’ve taken of animals that start with an e. I’ve included the story behind each photo and some animal facts. Because who doesn’t love weird animal facts!

The second is an enormous list with over 600 animals beginning with e! 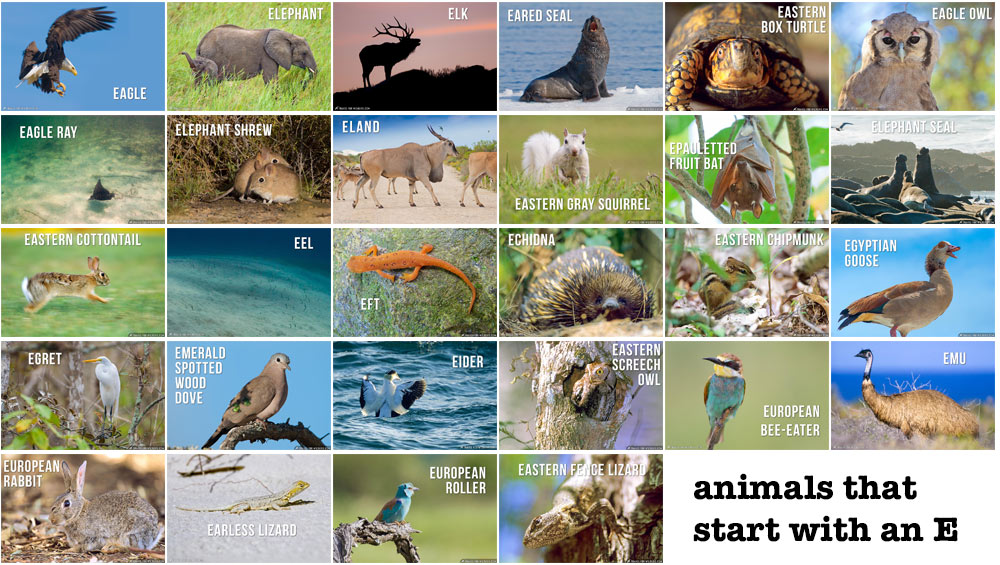 Pictures of Animals Beginning with E!

Here’s a gallery of photos I’ve taken of animals beginning with e!

1) Echidna. This is probably my favorite of all the animals that start with an e! Beside the platypus, echidnas are the only egg-laying mammals in the world! There are four species and they are all found in Australia and New Guinea. I photographed this Short-beaked Echidna (Tachyglossus aculeatus) foraging among the leaf litter at Ninety Mile Beach in Victoria, Australia. 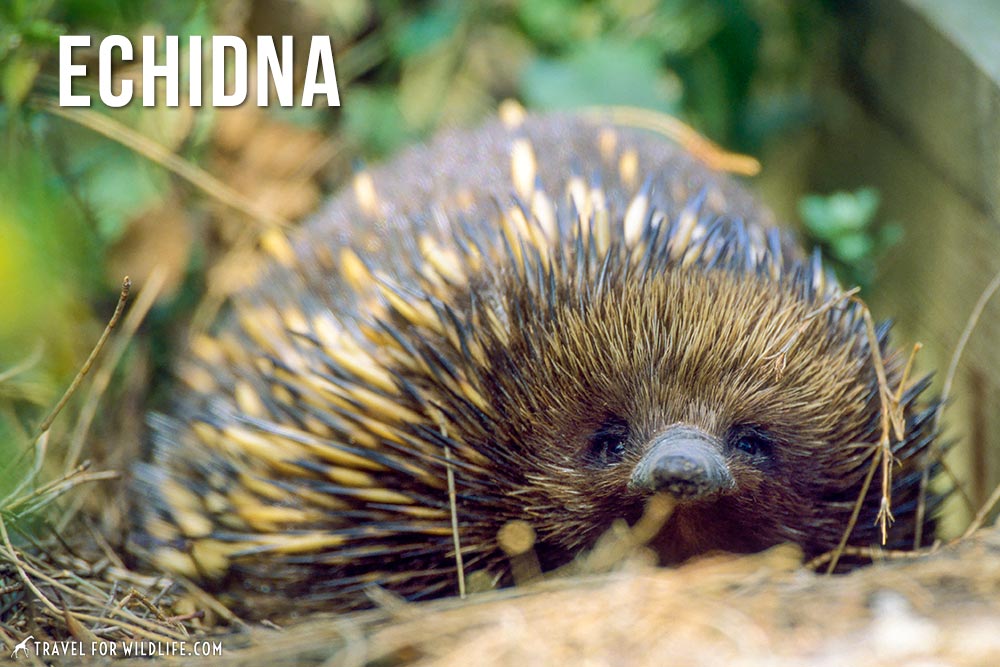 2) Eland. The Elands are the largest antelopes in the world! I photographed this herd of Common Elands (Tragelaphus oryx) in De Hoop Nature Reserve in South Africa. 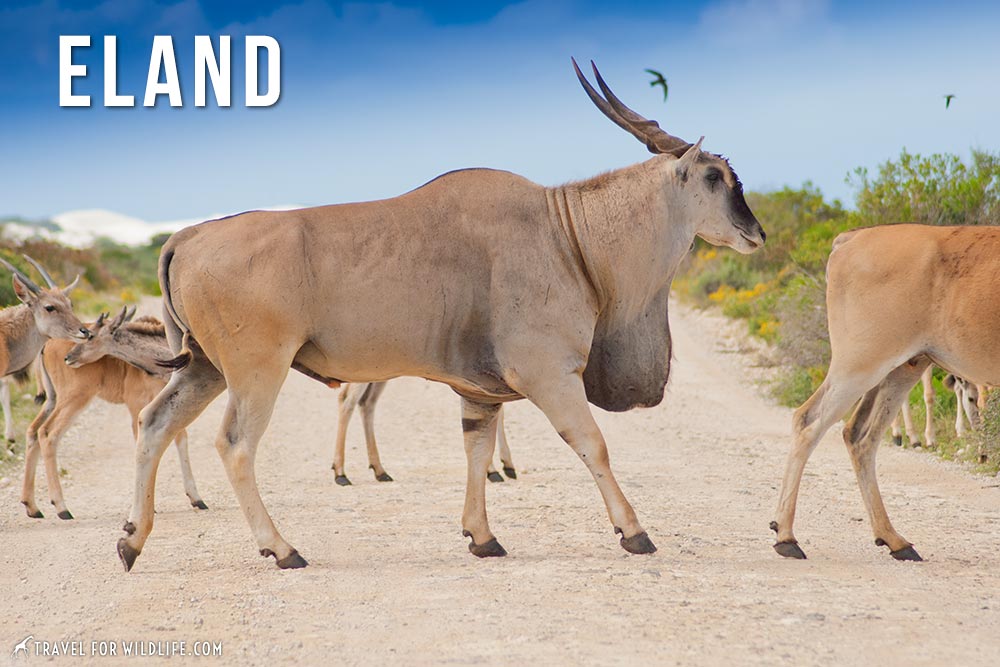 3) Elephant. Perhaps the most iconic of all the animals that start with an e (and number 4 on my list of favorites), elephants are the largest land animals on the planet! I photographed this African Elephant (Loxodonta africana) mother and baby in Kruger National Park, South Africa. 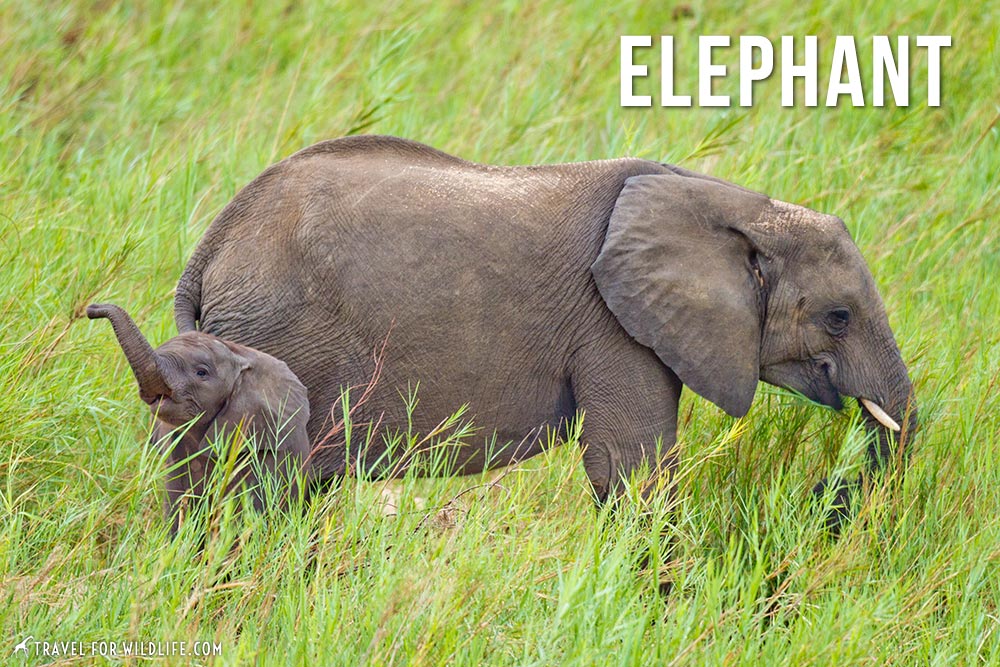 4) Elk. The name Elk can be a little confusing. In North America, Elk refers to this animal below (Cervus canadensis) sometimes known as the Wapiti, which I photographed in Yellowstone National Park, Wyoming. This same species in Europe is called the Red Deer, though some consider it a separate species: Cervus elaphus. In Europe, the name “Elk” refers to the animal that we in North America call a Moose! Did you get all that? 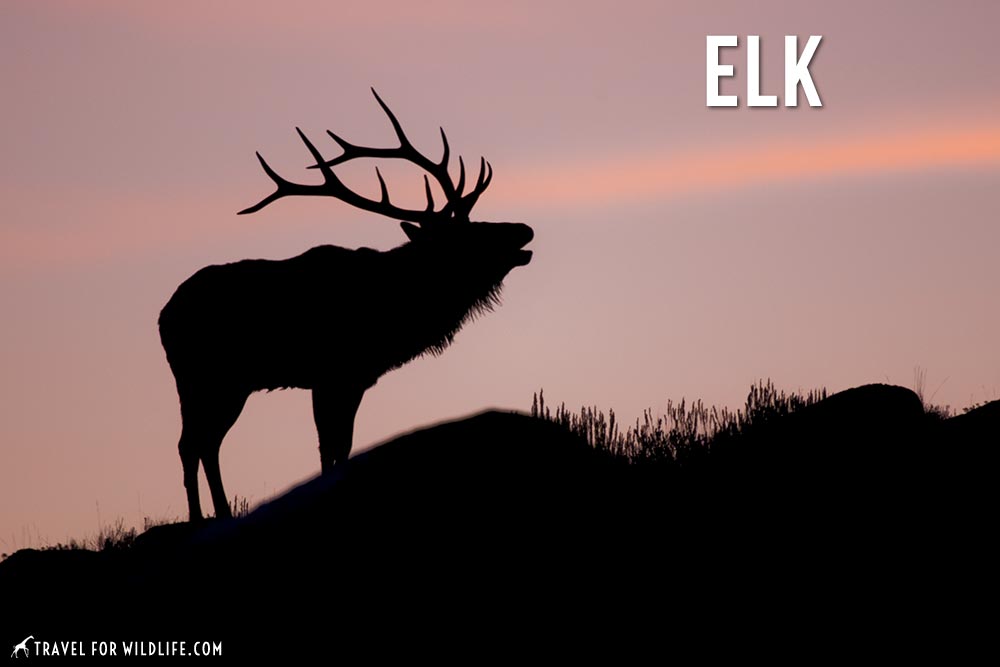 5) Eagle. When you think of animals that start with an e, the eagle is probably one of the first that pops into your head. There are more than 60 species of eagles worldwide. I photographed this Bald Eagle (Haliaeetus leucocephalus) flying into its nest on the top of a cliff in the McNeil River State Game Sanctuary in Alaska. 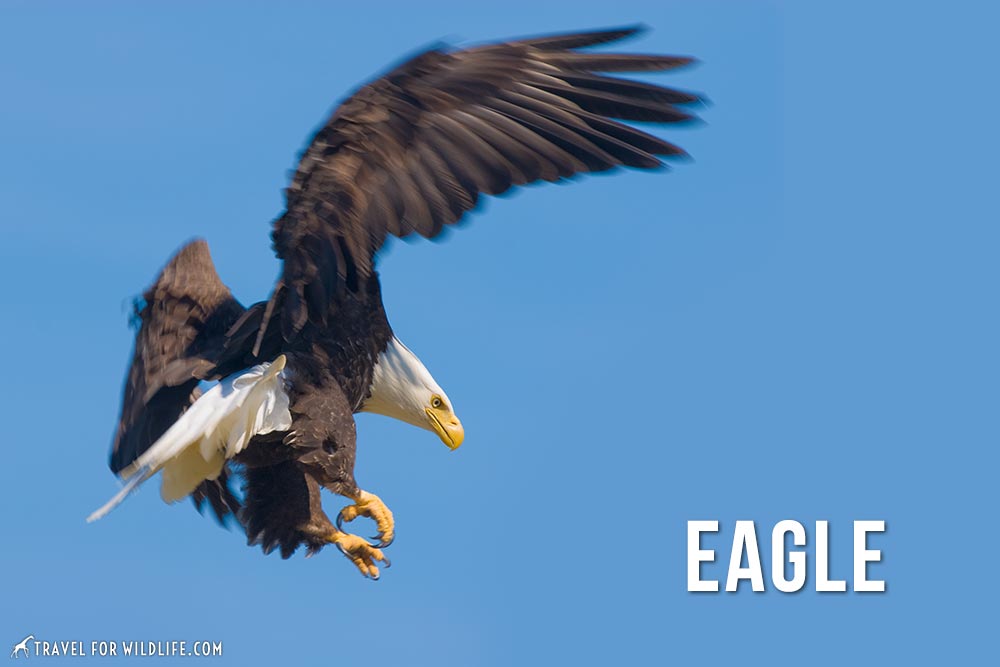 6) Egret. The word Egret is a sort of general name for some the long-legged wading birds in the Heron family. This means that all egrets are herons, but not all herons are egrets. The one I’ve photographed below is the largest egret in North America, the Great White Egret (Ardea alba), roosting in Ding Darling National Wildlife Refuge in Florida. 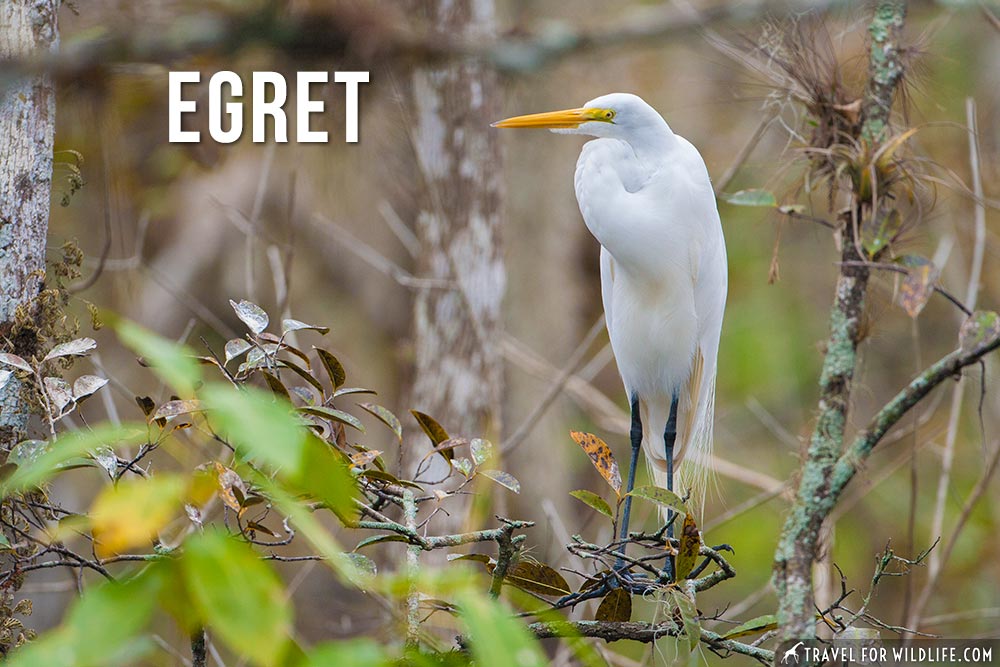 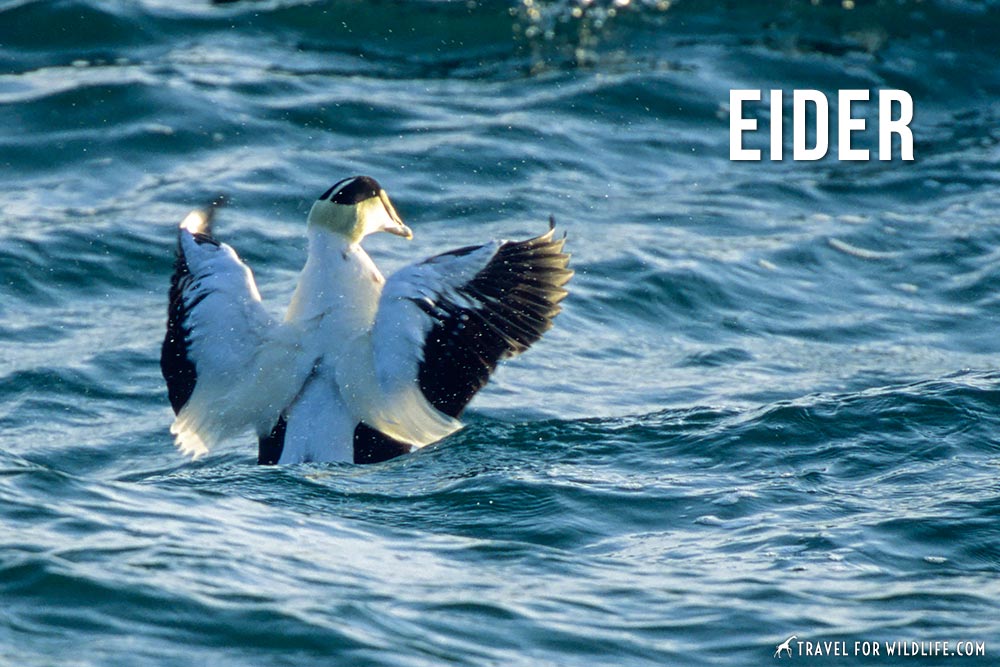 8) Emu. The Emu comes in at number 5 on my top five list of favorite animals that start with an e. What a big crazy bird! The Emu (Dromaius novaehollandiae) is the second tallest bird in the world. Only the Ostrich is taller! And, like the ostrich, the emu cannot fly. I photographed this Emu wandering around near the ocean in Shark Bay in Western Australia.

9) Eft. Here’s two for the price of one. An Eft is the terrestrial stage of the Eastern Newt (Notophthalmus viridescens). This salamander species starts life as an aquatic larva, and then metamorphosizes to a juvenile stage called a Red Eft. The eft develops lungs and lives on land for several years. Then it transforms again to a semi-aquatic adult stage! The Red Eft below was photographed in the Shennandoah National Park in Virginia.

10) Eel. Eels are fish with long snake-like bodies in the order Anguilliformes. There are more than 800 species worldwide. The eels in this photo are called Brown Garden Eels (Heteroconger longissimus). At first glance it looks like little plants growing in a garden, but each one of these is a small eel in its own burrow. I photographed this large colony of garden eels near Lighthouse Reef in Belize.

11) Earless Lizard. The Earless Lizards comprise two groups of lizard in the Western United States and Mexico. (Genus Cophosaurus and genus Holbrookia). I photographed this Bleached Earless Lizard (Holbrookia maculata ruthvenii) in the White Sands National Monument, New Mexico. I know it is a male because it has dark spots on the side of his belly. Earless lizards actually do have ears, they just don’t have any external ear opening. This may be an adaptation for its burrowing lifestyle. 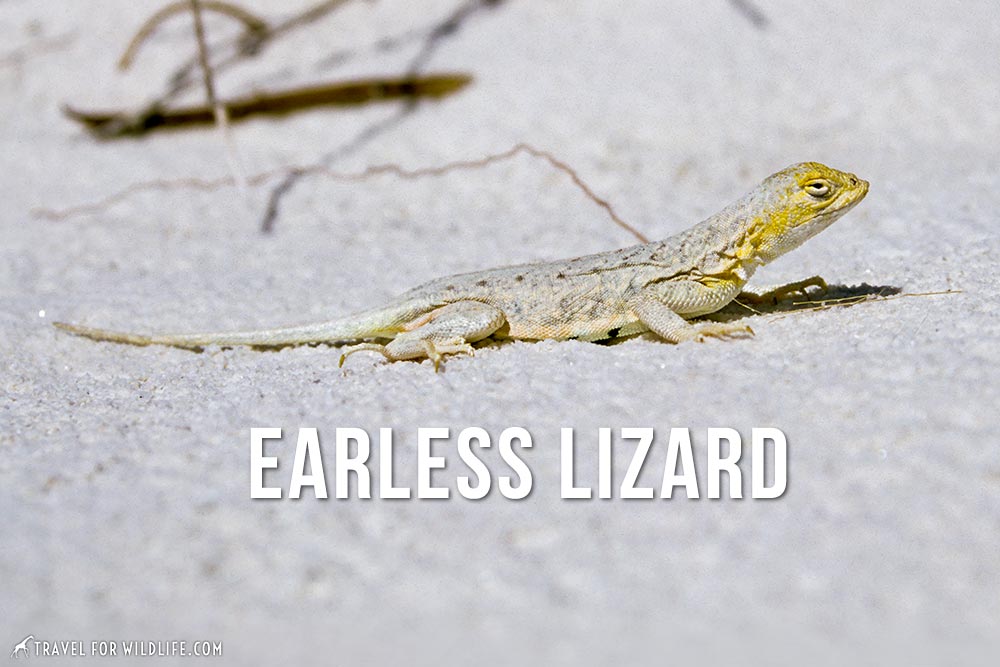 12) Elephant Shrew. The Elephant Shrew is number 2 on my list of all-time favorite animals that start with an e! They are so cute and weird and so fun to watch. We saw them for the first time this year in the Kgalagadi Transfrontier Park in South Africa. Also known as Sengis, there are 19 species of elephant shrews in Africa. 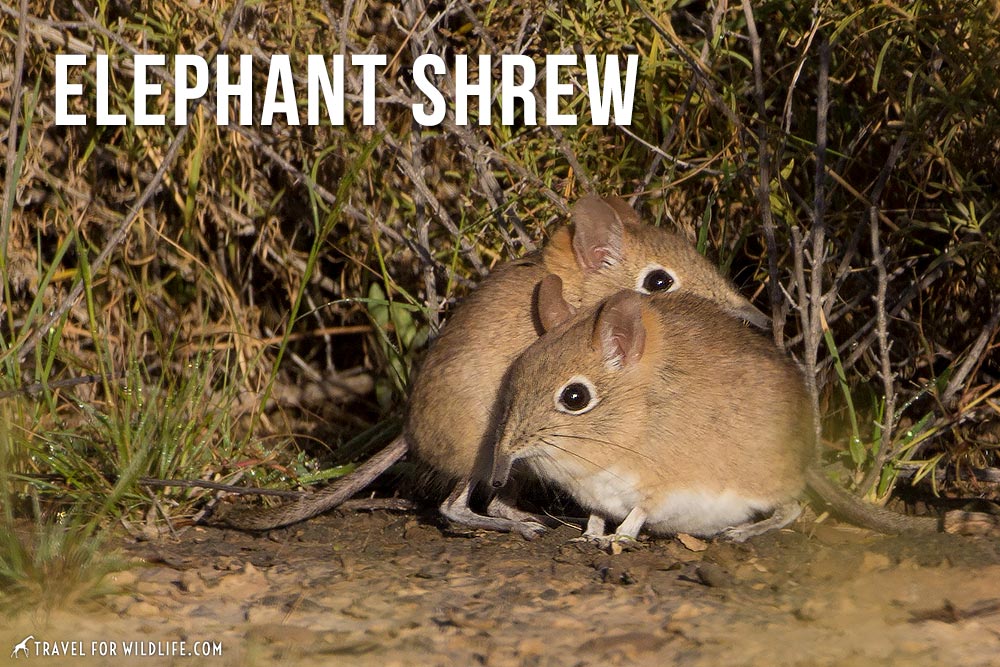 13) Eagle Owl. There are several species of owls known as Eagle Owls in the world, but my favorite is the Giant Eagle Owl (Bubo lacteus) shown here in the Kalahari Desert in South Africa. He probably hunts the little elephant shrews in the photo above! 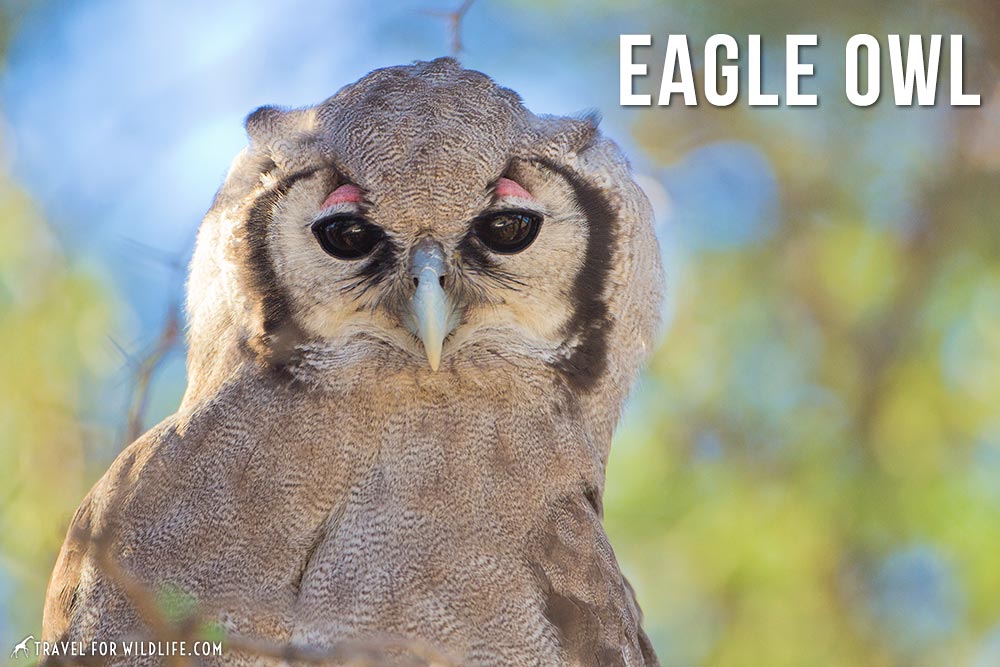 14) Elephant Seal. The Elephant Seal is number 3 on my list of favorite animals that start with an e. Yep, I like animals with big silly noses! I photographed these huge male Northern Elephant Seals (Mirounga angustirostris) fighting at the Piedras Blancas elephant seal colony on the coast of California 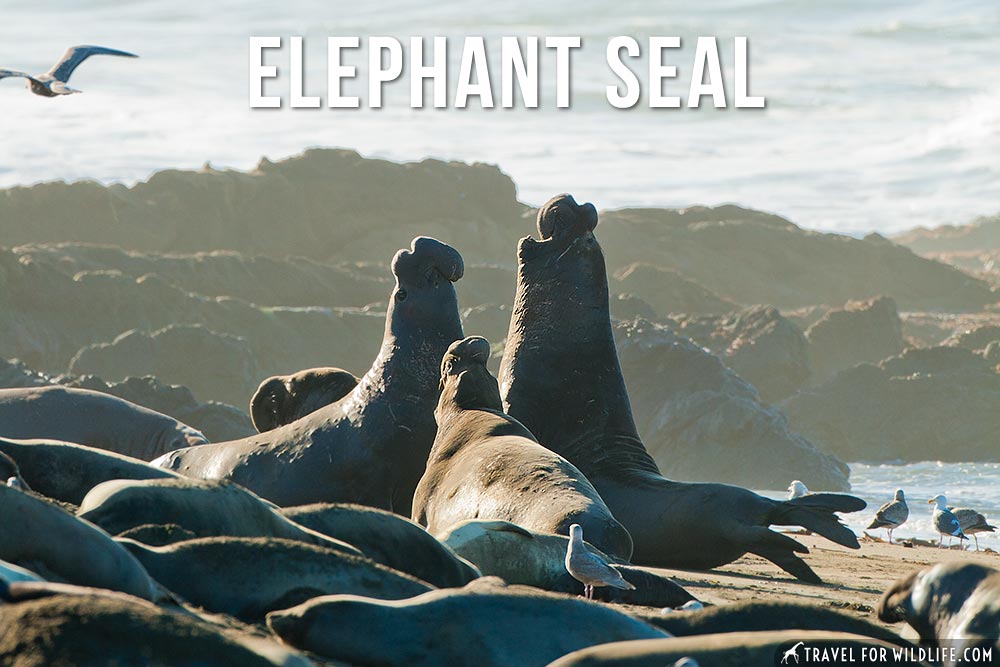 15) Epauletted Fruit Bat. We were camping in Botswana and kept hearing a strange beeping sound coming from the trees above our tent. It sounded like the loud beep of an electronic heart-rate monitor. We searched the trees and finally discovered that we were camped under a large colony of Epauletted Fruit Bats! The noise was the courtship call of the males. There are nine different species across Africa. This species is probably the Peter’s Epauletted Fruit Bat (Epomophorus crypturus) photographed in Maun, Botswana. 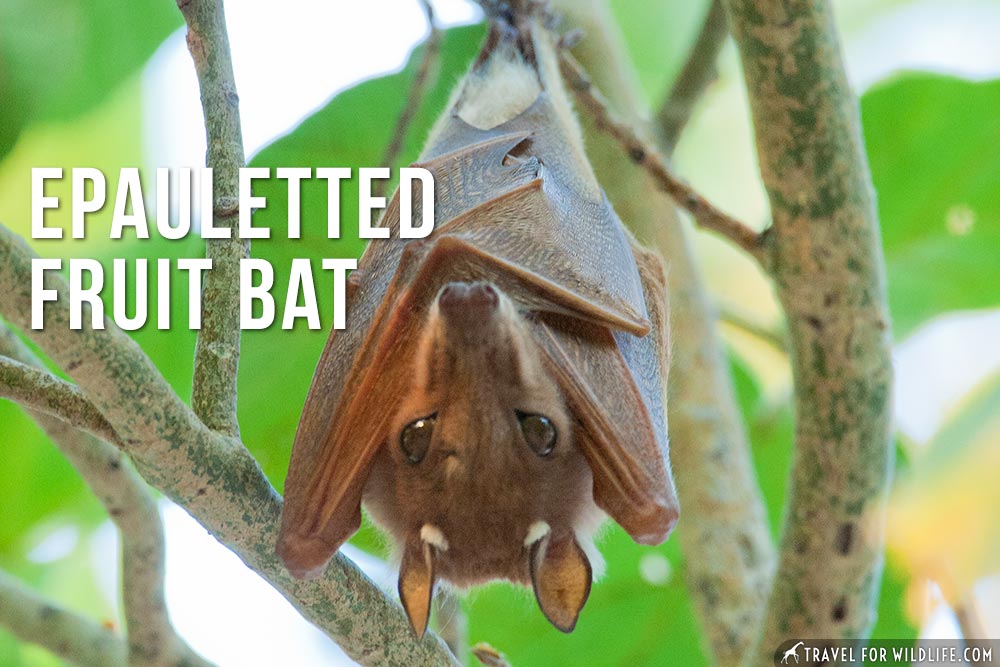 16) Eagle Ray. The Eagle Rays are a family of rays called Myliobatidae. This one is the Spotted Eagle Ray (Aetobatus narinari) photographed off of Caye Caulker in Belize. It has venomous spines at the base of its long tail and will often leap high above the water! 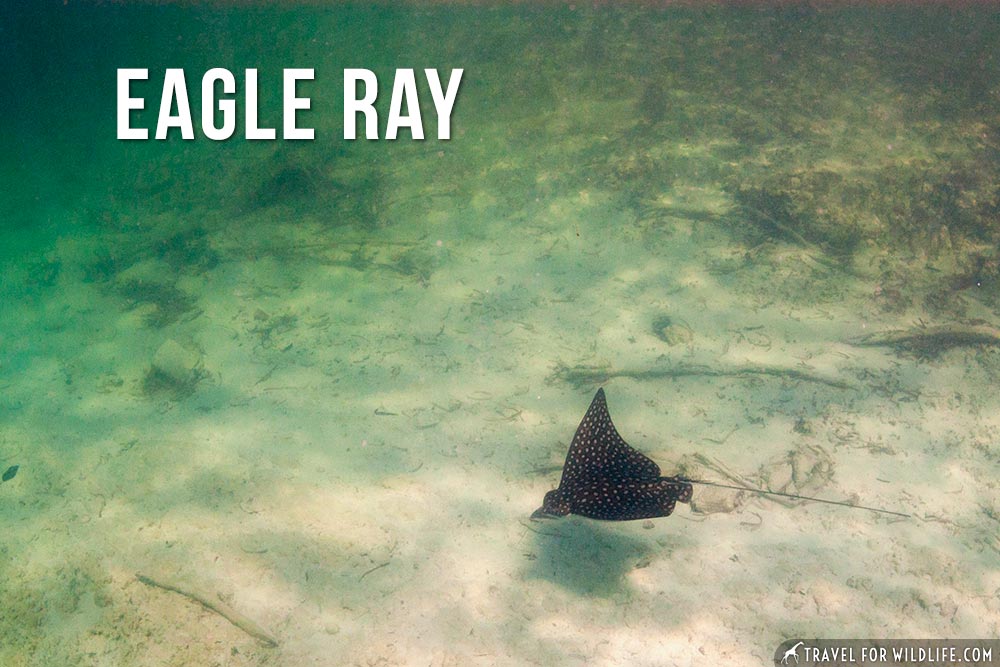 17) Emerald Spotted Wood Dove. This dove looks rather plain until the sunlight catches it just right. Then you can seen the brilliant emerald green spots for which it was named! I photographed this Emerald-Spotted Wood Dove (Turtur chalcospilos) in Zululand, South Africa. 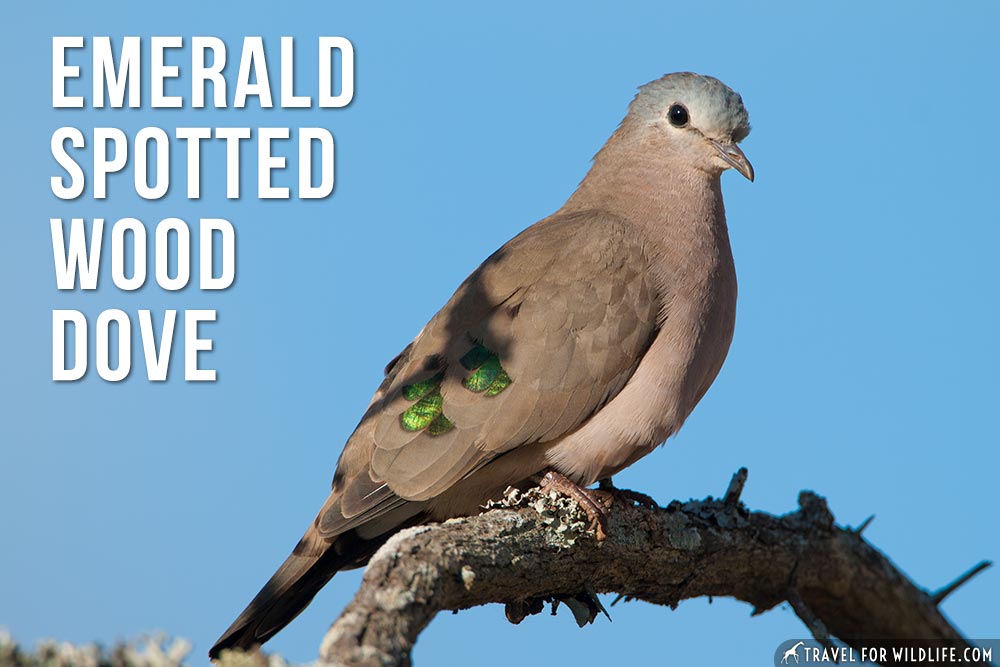 18) European Bee Eater. The European Bee Eater (Merops apiaster) breeds in Europe but I photographed this beautiful fellow in southern Africa. That’s because most of the population migrates south for the winter. The European Bee-Eater builds its nest by digging a tunnel into a vertical wall of earth like a river bank. The tunnels are about three feet long and end in a nesting chamber which holds 4-7 eggs. Photographed in Etosha National Park, Namibia. 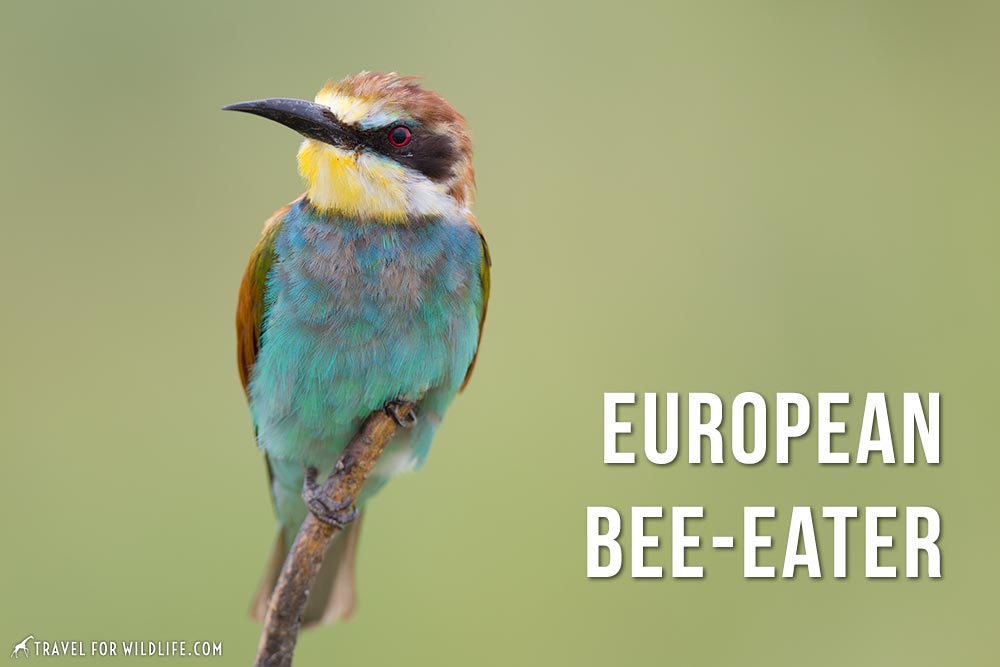 19) Eastern Chipmunk. This has to be one of the cutest animals that starts with an e: the Eastern Chipmunk. I know, it’s kind of cheating to use common names that start with “Eastern” but get used to it because there are at least a hundred in the humongous list below! I have a large colony of Eastern Chipmunks (Tamias striatus) living right outside my door here in North Carolina and I love watching their adorable antics. Although the loud chipping territorial call can get pretty annoying first thing in the morning! 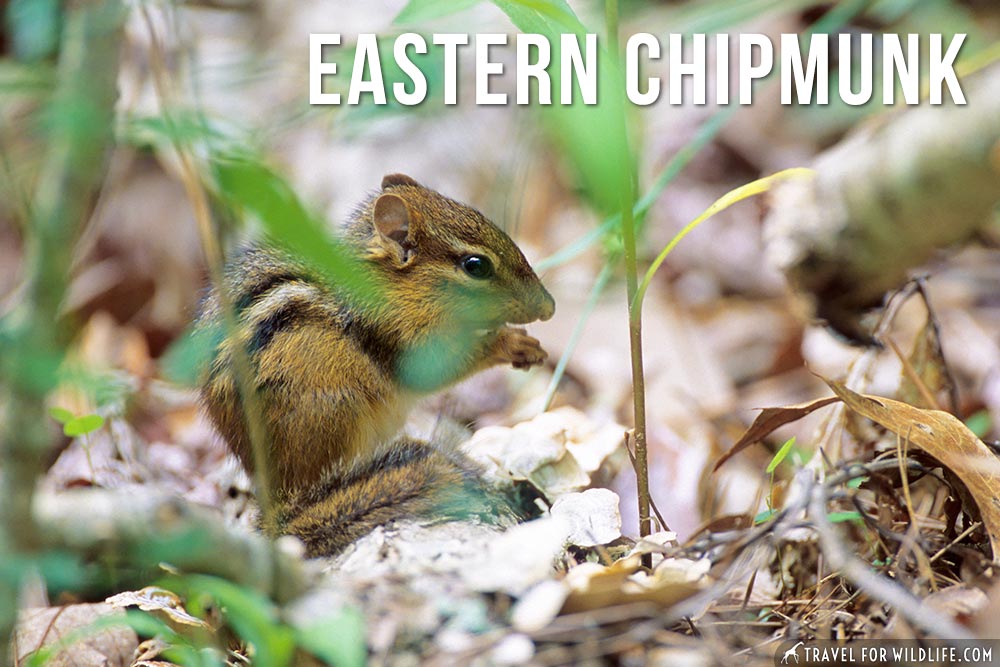 20) Egyptian Goose. The Egyptian Goose (Alopochen aegyptiaca) was domesticated by the Ancient Egyptians and is now found across most of Africa. I photographed this one all the way at the opposite end of the continent in Cape Agulhas, South Africa. That’s as far south as you can get in Africa! 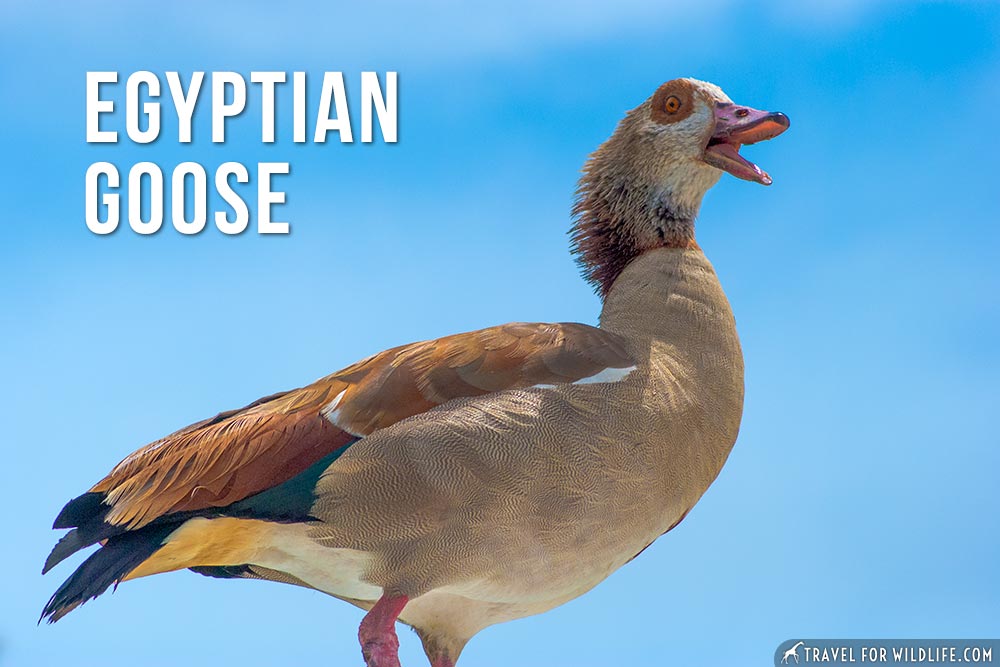 21) Eared Seal. There are three main groups of seals: the Odobenidae (the Walrus), the Phocidae (the “true” seals), and the Otariidae (the eared seals.) The Eared Seals are also known as fur seals and sea lions. As you can see from the photo below, the have visible external ears unlike the true seals. This one is the Antarctic Fur Seal (Arctocephalus gazella) which I photographed floating on a chunk of ice in Antarctica! 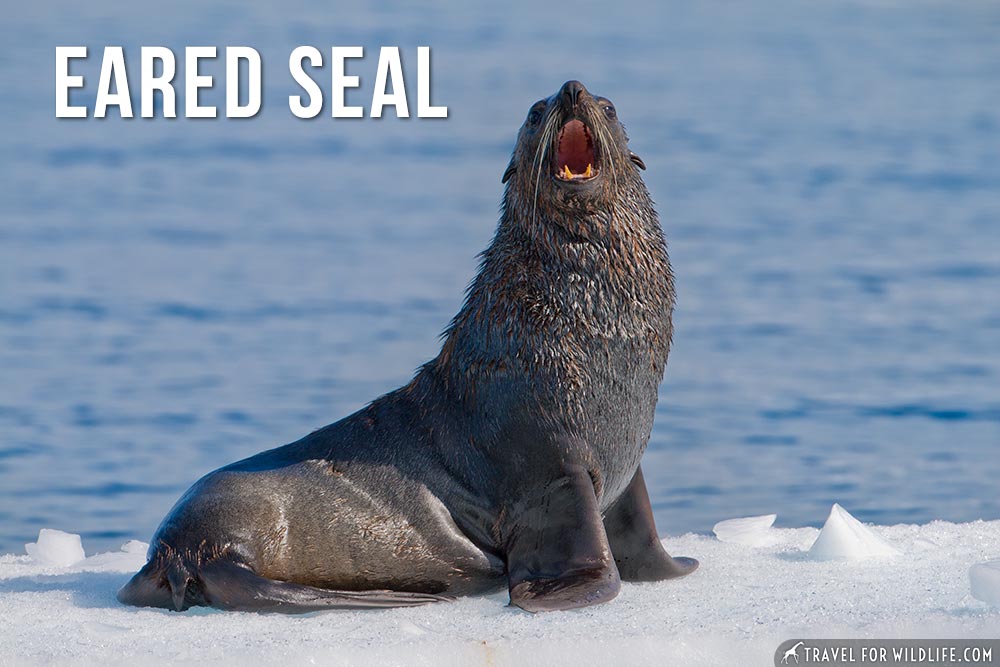 22) European Roller. Like the European Bee-eater above, the beautiful European Roller is another bird found in Europe who migrates to Southern Africa in the winter.  I photographed this colorful European Roller (Coracias garrulus) in Kruger National Park in South Africa. The name roller refers to the bobbing courtship display between the male and female. 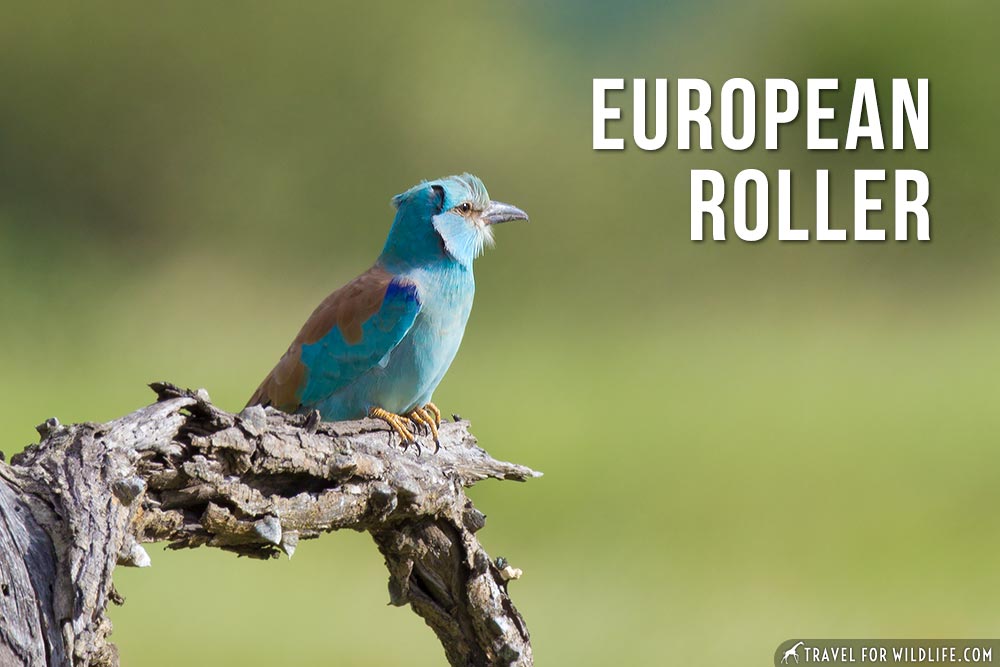 23) Eastern Screech Owl. We have a family of Eastern Screech Owls (Megascops asio) living in our yard and one night our camera trap caught a video of the two baby owls having a drink in our pond! I don’t know why these tiny birds are named Screech owls. They don’t screech at all. Their call is a delicate descending trill like the whinny of a horse. We love to hear it at sunset each night as they begin their rounds! 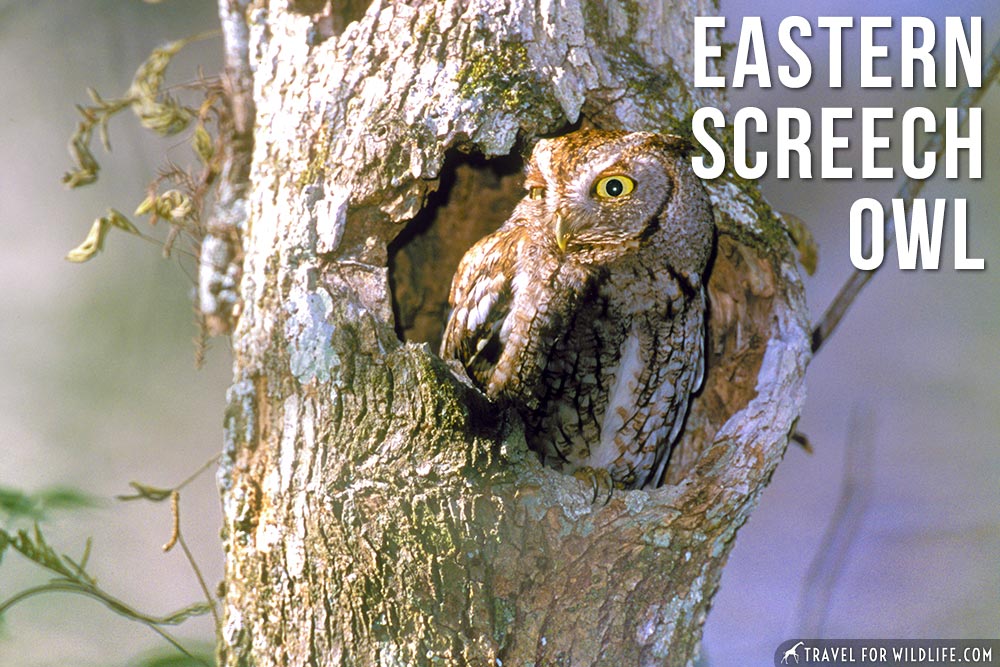 24) European Rabbit. The European Rabbit (Oryctolagus cuniculus) was the beloved star of Beatrix Potter’s British children’s book The Tale of Peter Rabbit. But on the opposite side of the world in Australia, the European Rabbit became a reviled pest. It was introduced there, and to other parts of the world, by Europeans and soon became a widespread invasive species. However, due to population declines in its native range of southwestern Europe, it is now classified as a near-threatened species by the IUCN. 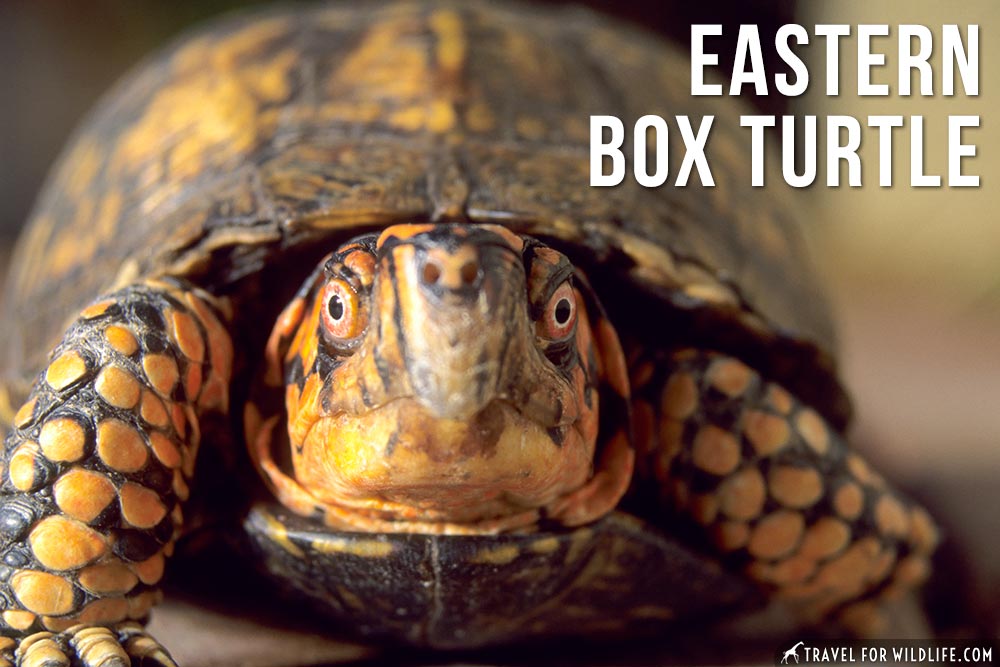 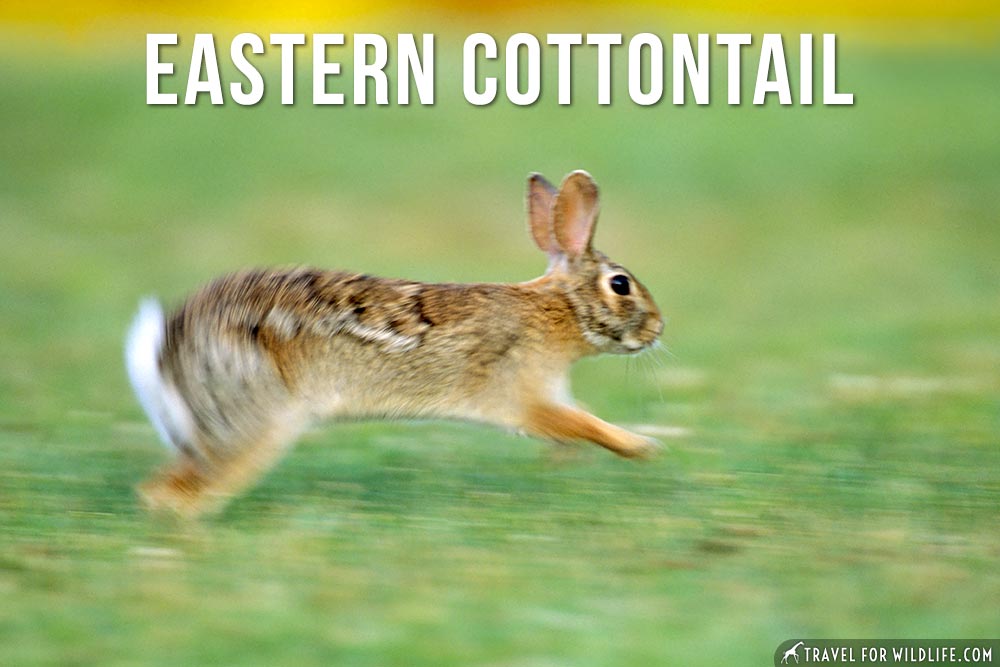 27) Eastern Fence Lizard. (Sceloporus undulatus). During the mating season, male Eastern Fence Lizards turn a brilliant blue color on the sides of their belly and under the chin. Apparently this is quite attractive to the females. Much like a squirrel, the Eastern Fence Lizard will usually climb a tree when it feels threatened and then will hide on the opposite side of the tree from the predator! I photographed this one in Mebane, North Carolina 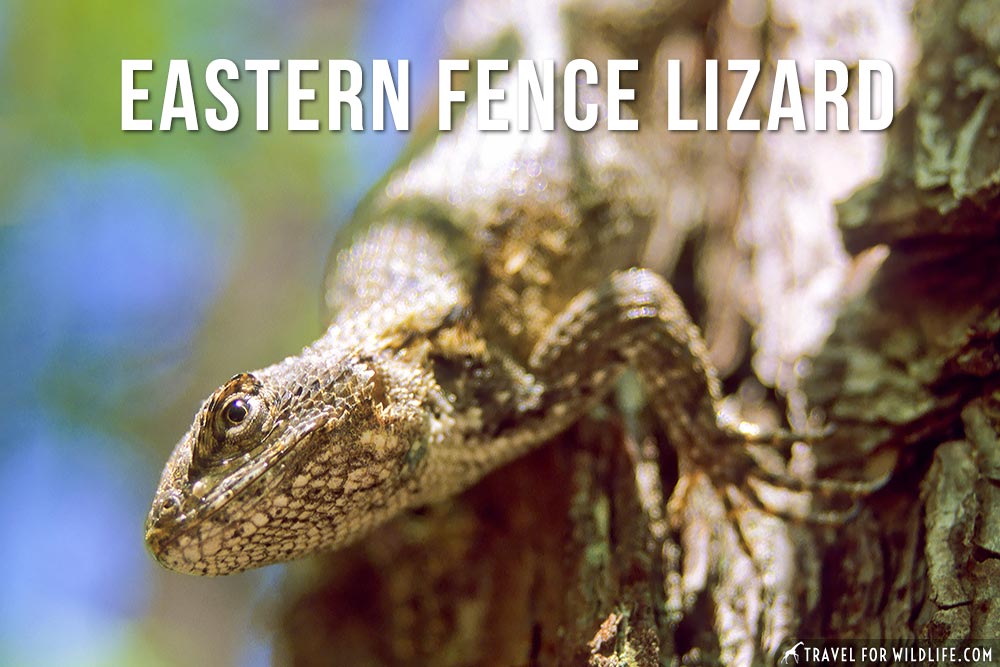 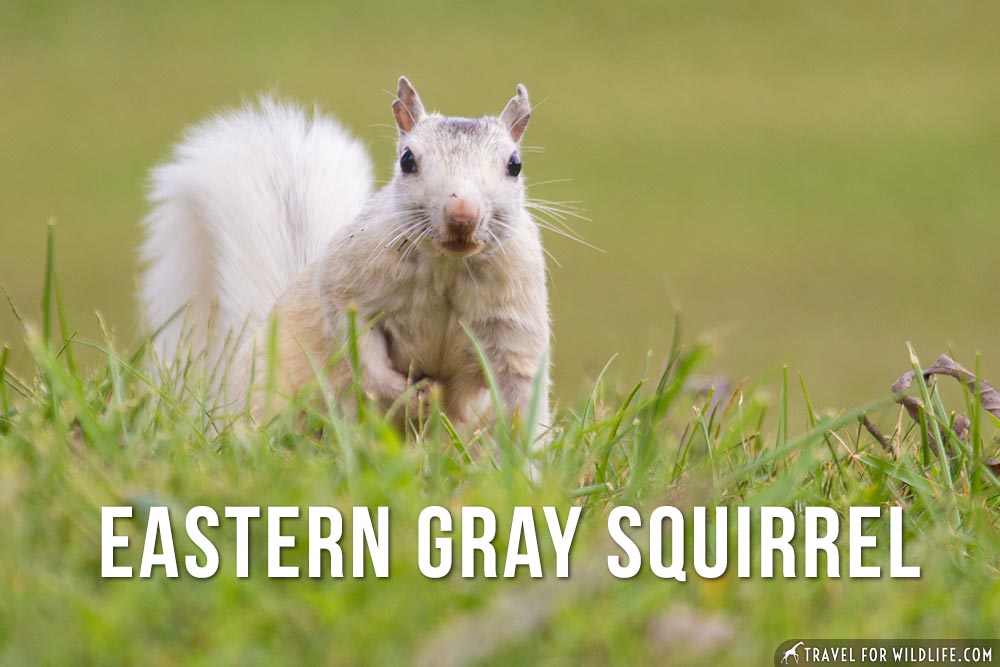 Read this next: Animals That Start With N: the Awesomely Illustrated List

Did you enjoy our list of Animals Beginning with E? Pin it!

If you found this list of animals that start with an e helpful, then please pin this image on Pinterest! 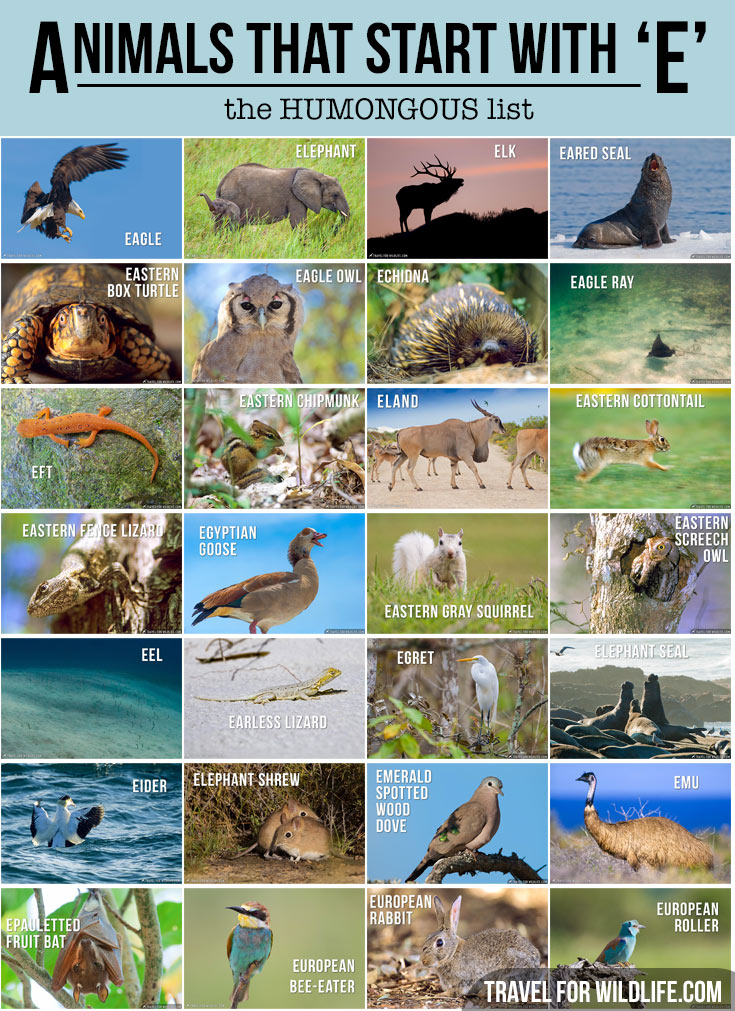