Whenever I see a picture of Devils Tower I think of mashed potatoes. If you’ve ever seen the film Close Encounters of the Third Kind then you know what I’m talking about. Cristina and I have driven by the Devil’s Tower area in Wyoming at least four times now on various trips to Yellowstone National Park and have never had time to stop. But on our most recent trip to Yellowstone in November, we finally decided to make the time.

I had no expectations other than to see the amazing geological formation and take a stroll around it. Little did I know that Devils Tower National Monument was more than an 70’s destination for aliens. It turned out to be a surprisingly fun wildlife watching destination in its own right! 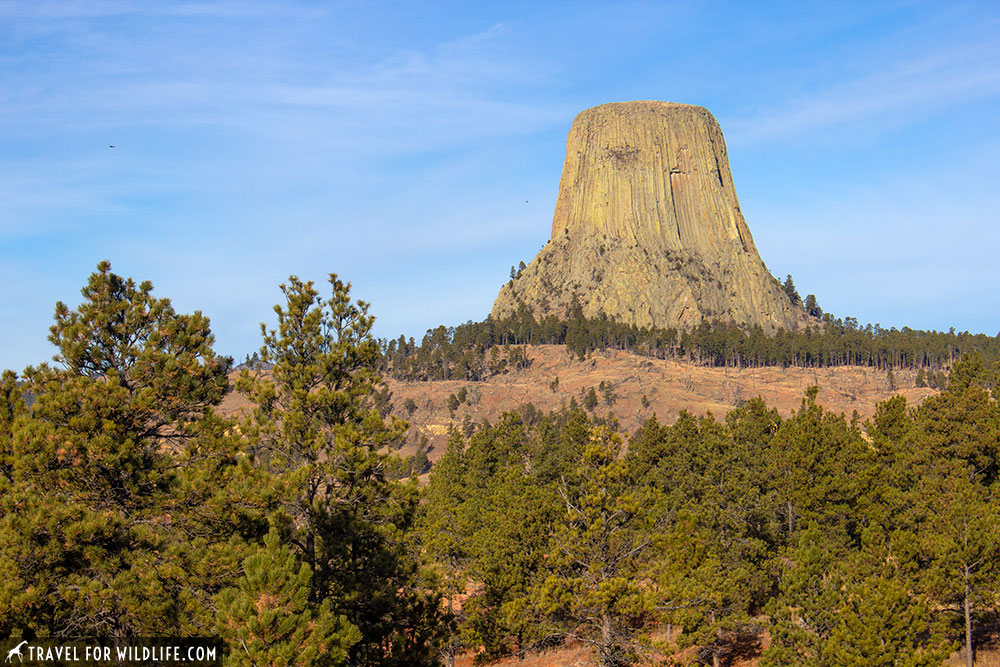 As soon as we entered the gate we had some close encounters with wildlife. While there was a stunning view of the tower on our right, it was the left side of the road that drew our attention. 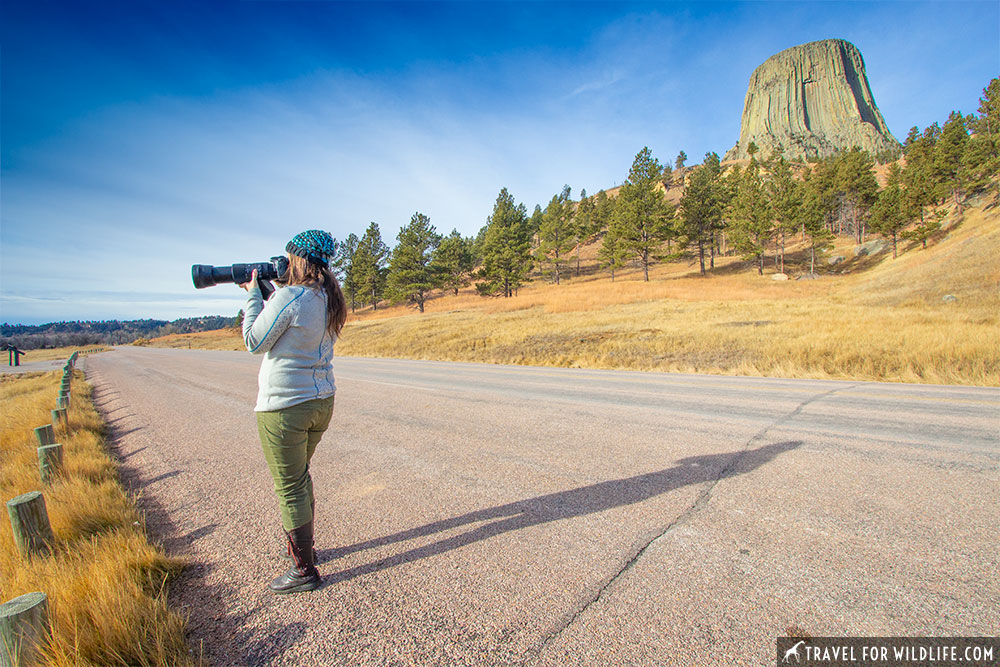 We stopped at a small pull-off, opened the door, and immediately heard soft yips coming from hundreds of short, erect figures spread across the plains. A prairie dog town! 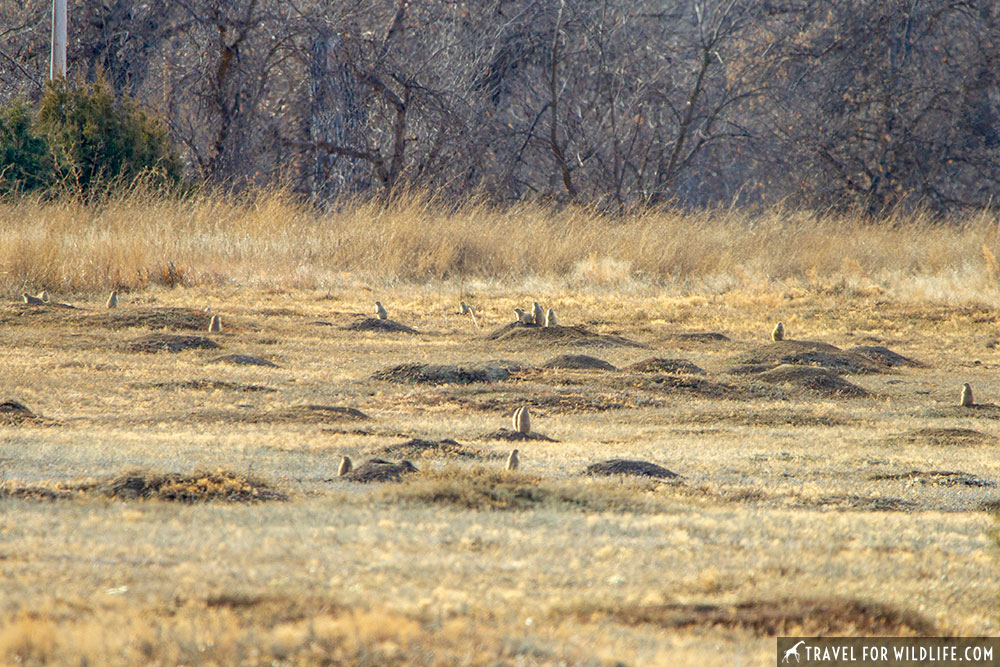 While prairie dogs used to be ubiquitous across the Great Plains, centuries of habitat loss and direct persecution have made them harder to find, and some species (the Mexican Prairie Dog and the Utah Prairie Dog) are now endangered. Devils Tower has one of the most accessible and visible Black-tailed prairie dog towns that we’ve come across. 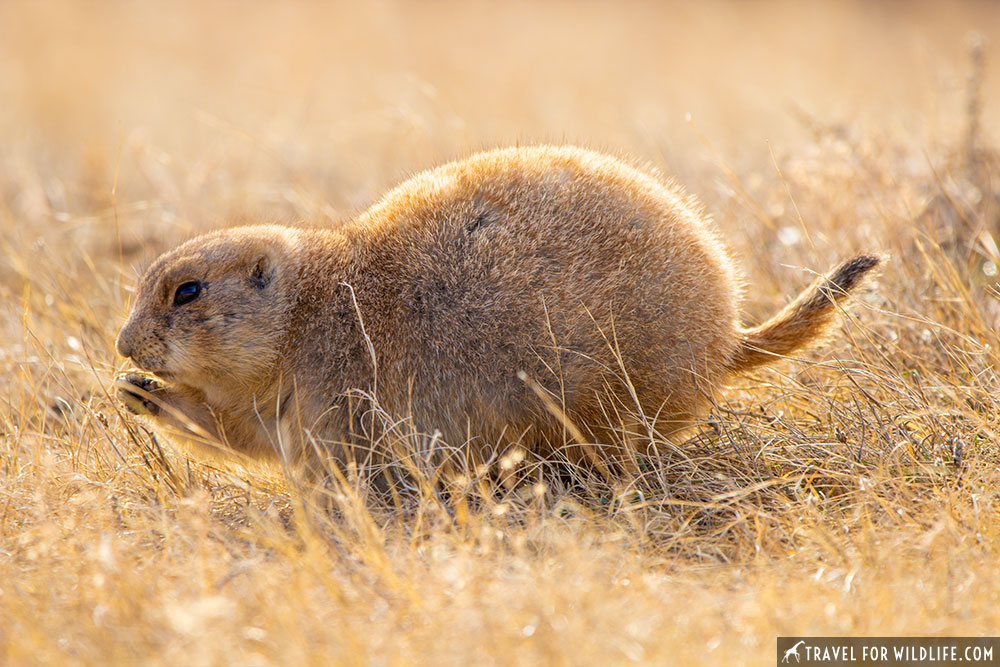 Here you see why it’s called a Black-tailed Prairie Dog!

Other good prairie dog towns can be found in Theodore Roosevelt National Park, and in Badlands National Park. But this one has excellent pull-offs for easy viewing. We were mesmerized! 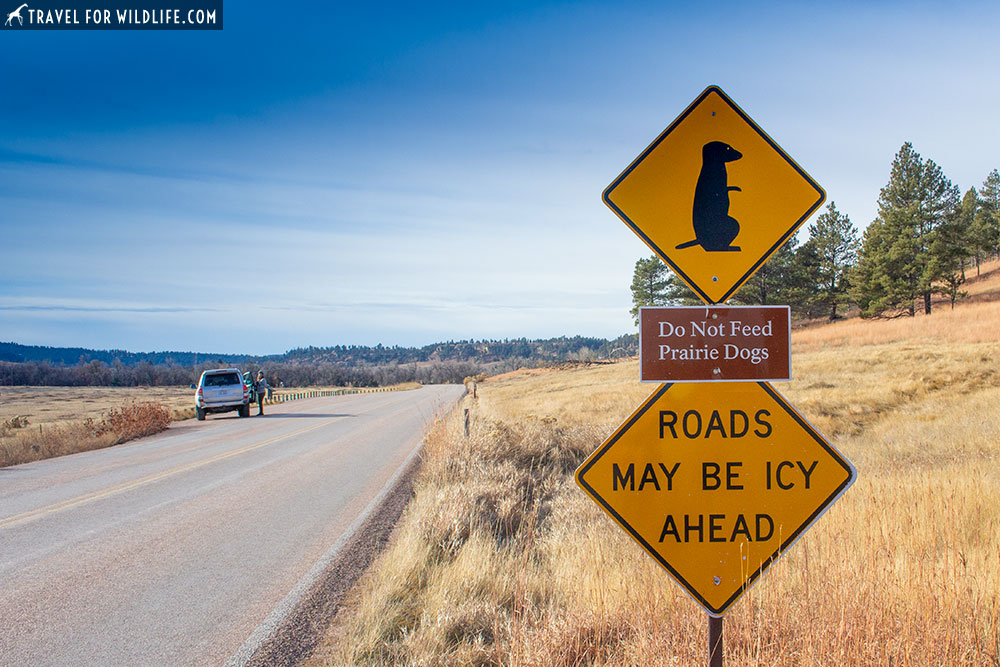 These guys are adorable and so much fun to watch. They are pretty well accustomed to people here and you can watch them quite close to the road. 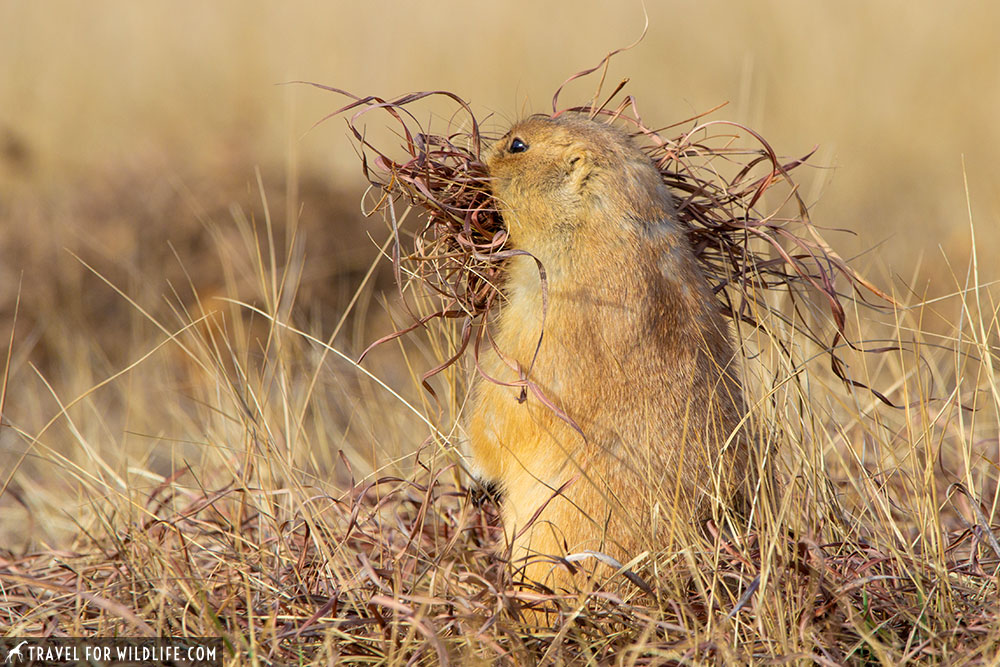 This prairie dog was busy collecting grasses to line his burrow.

It’s no wonder people want prairie dogs as pets. But these are wild animals and should not be kept in captivity! Likewise, they should not be fed (and there are many signs  here to remind you in case you get tempted). 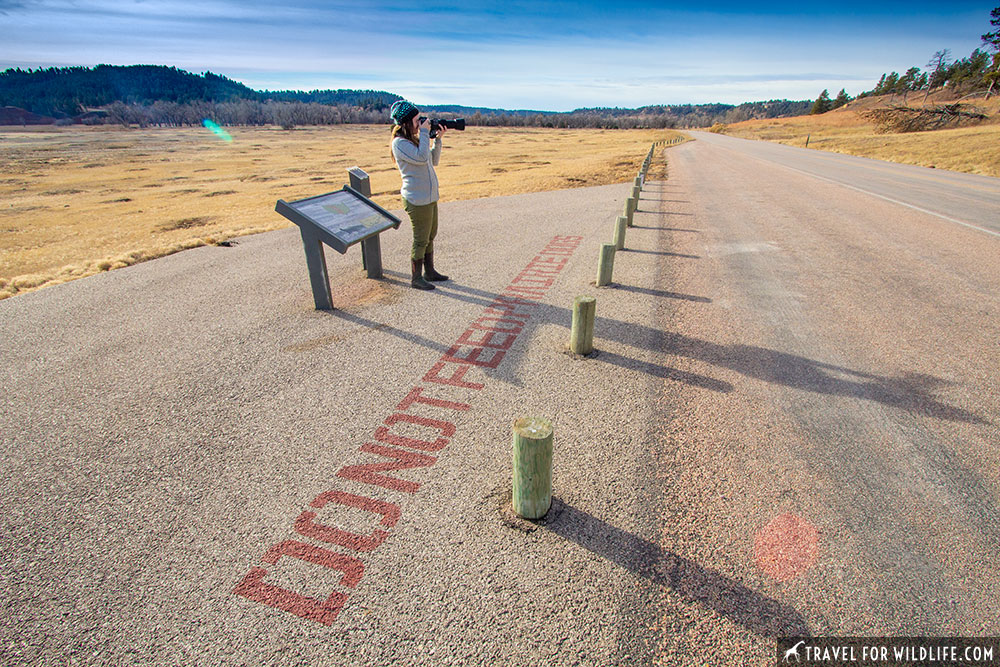 Do not feed the prairie dogs! Their natural food is much better for them!

They deserve a wild life, and it looks like they have a good one here at Devils Tower.

We stood there watching their antics, listening to the calls of bald eagles from the trees across the field, and watching a white-tailed deer buck cross the road to our left, completely oblivious of the incredible tower looming behind us. But we had only budgeted ourselves 3 hours for the visit so we dragged ourselves away and wound our way up the road. 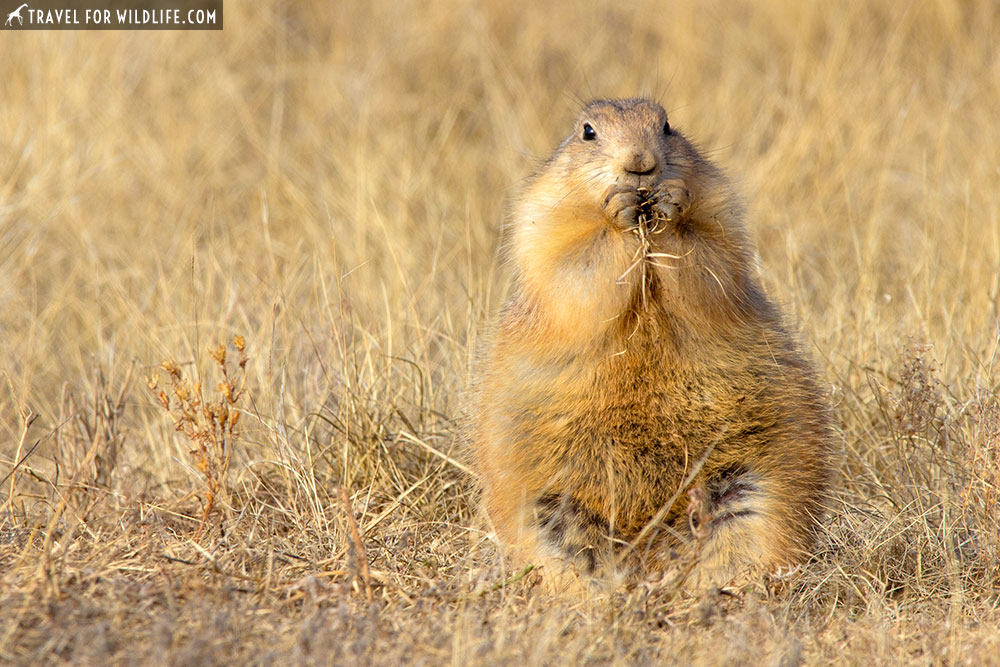 Winding up the road through open pine forest, we began spotting deer left and right. Bucks with antlers (it was November, good timing to see racks) lone does, and even mothers with grown fawns. But we soon noticed that they weren’t all alike. There were both White-tailed Deer and Mule Deer (also known as Black-tailed Deer)! 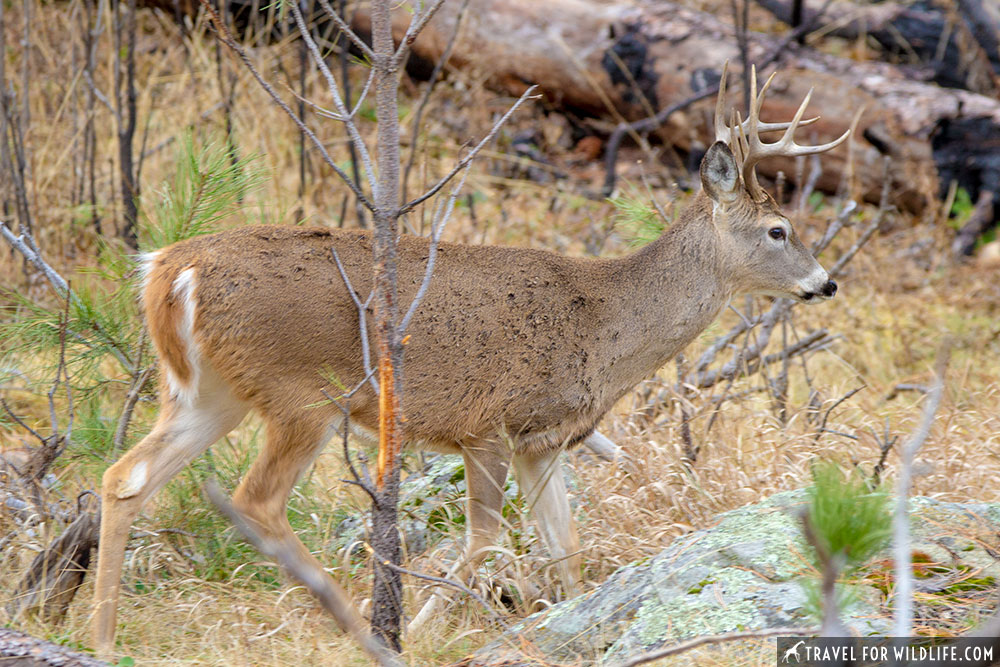 This is the deer I’m used to seeing on the east coast: the White-tailed Deer (this one is at Devil’s Tower)

This was the first place I’d ever been where I could observe both species side by side in such close proximity and in such high density. Awesome! 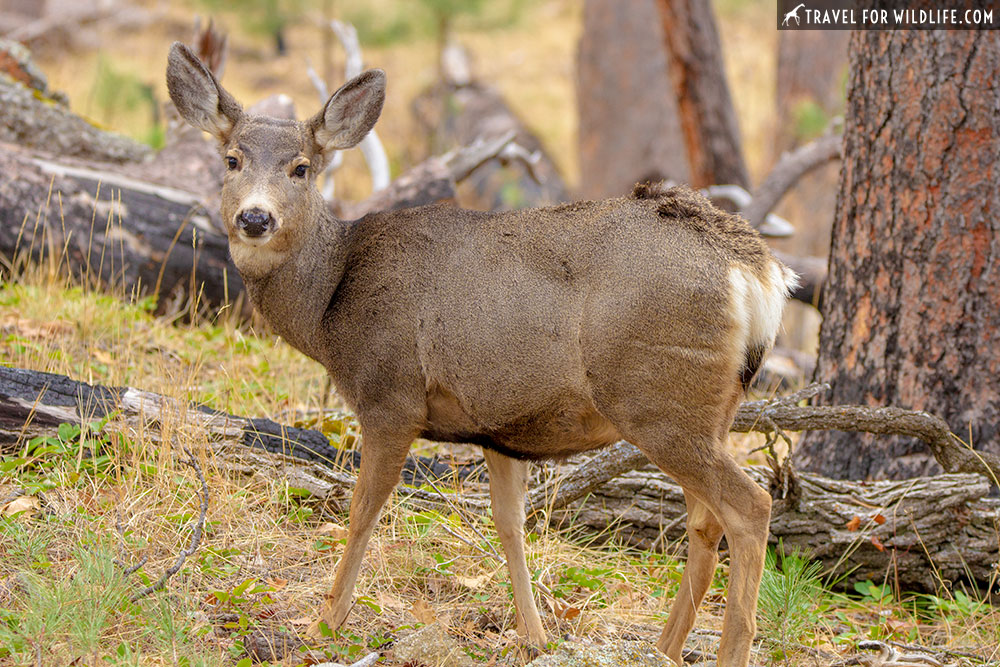 As you can see, the Mule Deer has a black tip to the tail, hence the other name; blacktail deer.

Arriving at the visitor’s center parking lot we stepped out to a beautiful crisp late fall day. We stopped in to ask a ranger about wildlife in the area. He said that while it was a fairly small protected area they had a pretty nice range of creatures from the lower areas up to the high top of the tower, including a surprising variety of mammals. 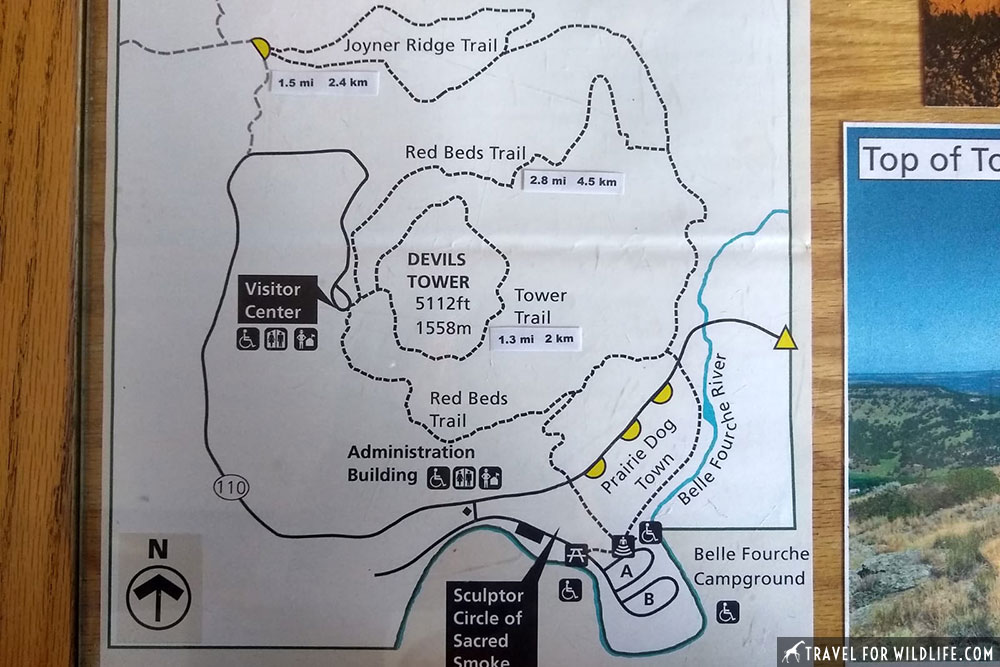 A badger family had been denning near the campground host’s campsite over the summer and some young had been sighted! Badgers are prairie dog predators and primarily nocturnal but can occasionally be seen in the evenings by the prairie dog town. We were there in the middle of the day so we had no such luck, but it was nice to know they were around.

Other Devils Tower animals: Foxes and coyotes may also be seen around the prairie dog town. Even more elusive are the bobcats and mountain lions that occasionally appear on park trail camera studies, but are almost never seen by visitors. However, the ranger said it is common to see wild turkeys, fox squirrels at lower elevations, and in the summer time you may catch bull snakes and rattle snakes along the trail.  You would be very lucky to spot one, but watch your step just in case! 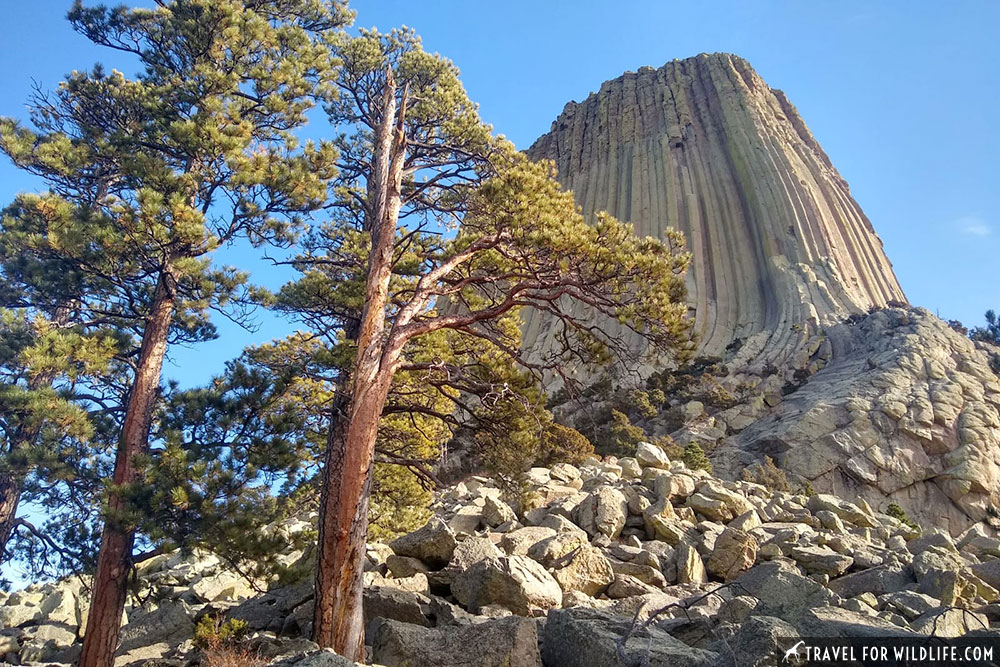 View of Devil’s Tower from the base

Heading up the trail around the base of the tower we heard nuthatches calling with nasal honks from the ponderosa pines, and soon head the loud trill of a red squirrel! We love these little guys so we kept our eyes peeled and eventually spotted a few scampering across the forest floor. 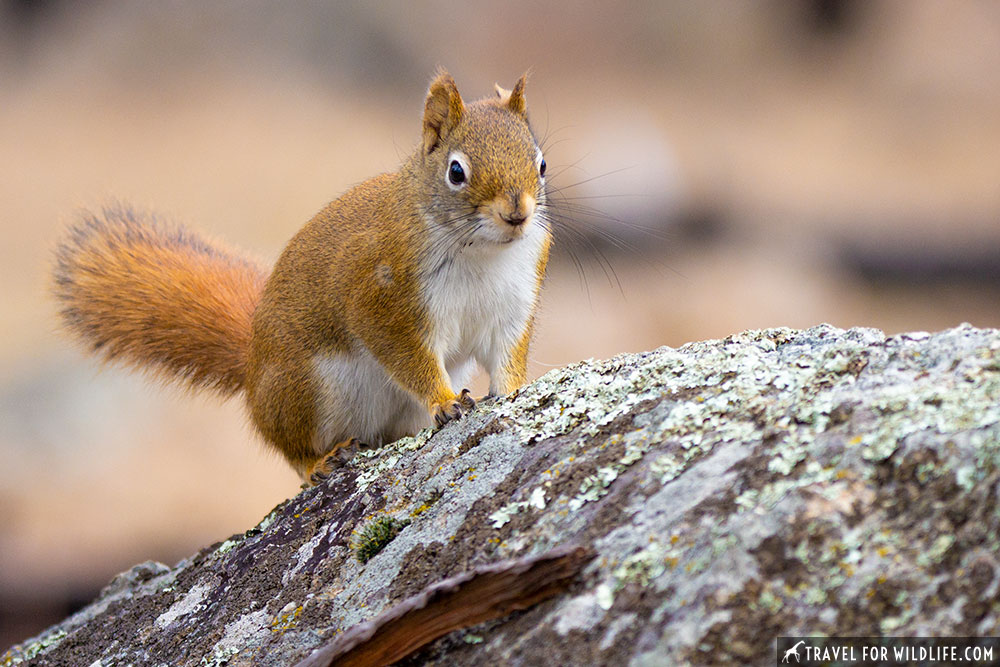 Red squirrel at Devils Tower. We love to hear the exuberant trill of a red squirrel in the forest!

Large birds of prey circled near the top of the tower, but without my binoculars I couldn’t identify them (I would guess turkey vulture). A sign informed me that occasionally golden eagles and bald eagles can be seen during the winter months and I had indeed seen a bald eagle cruising right over the middle of the prairie dog town. Later, from a distance, I spotted a flock of pigeons (rock doves) circling around the top of the tower! 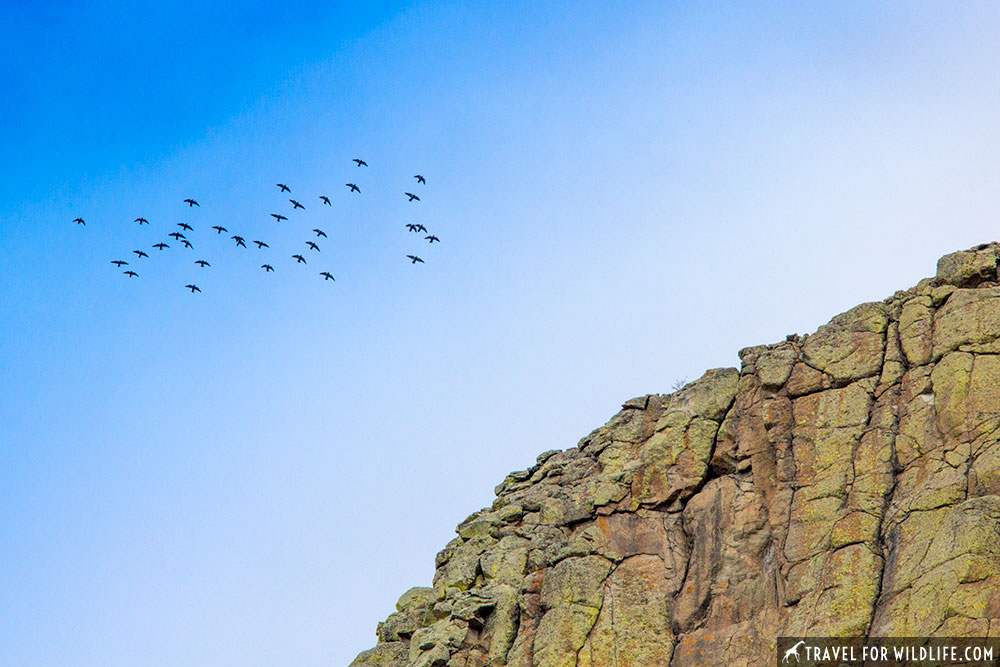 Magpies jumped from branch to branch, up to their usual mischief, and small songbirds twittered between the needles.

The view of the tower is stunning from every angle and it’s hard to get a sense of the massive scale of the columns unless you happen to spot a climber making their way up. 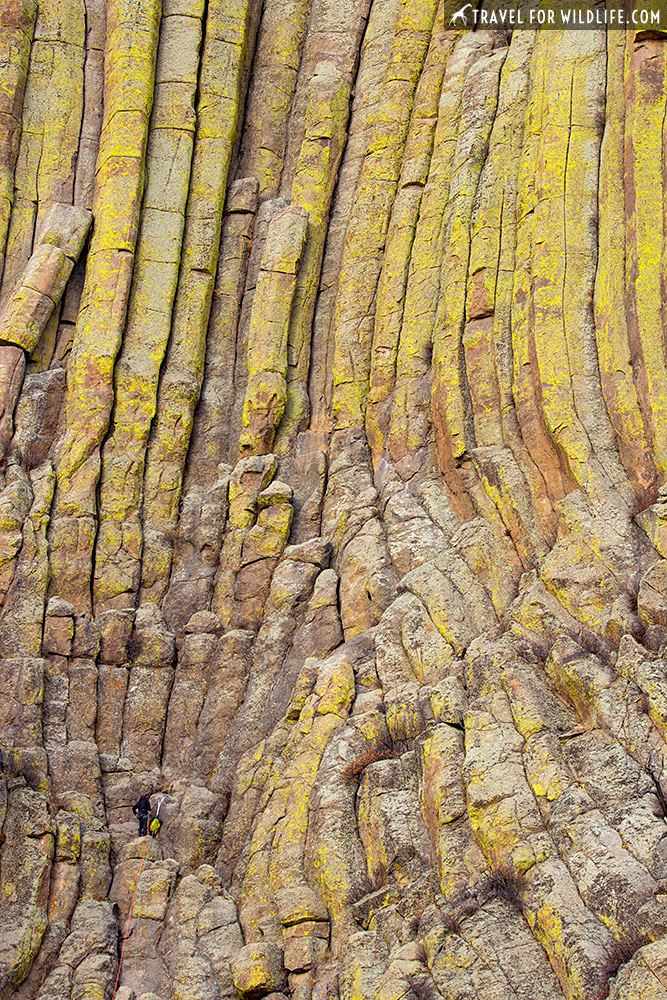 Devils Tower climbing is a controversial practice because it is considered a sacred place to native American tribes, and their ceremonial prayer cloths may be seen tied to shrubs and low branches.

A very tame mother mule deer with two large fawns munched unconcerned right next to the trail, while a male whitetail deer walked by silently below. One of the many informative signs tantalized me with an image of a porcupine, which only venture out at night to feed. It also pointed out that least chipmunks can be seen scampering around the boulders at the base of the tower, but I didn’t personally spot one. Many of these boulders are spotted with a beautiful neon lime-green lichen that looks as if it would glow in the dark. 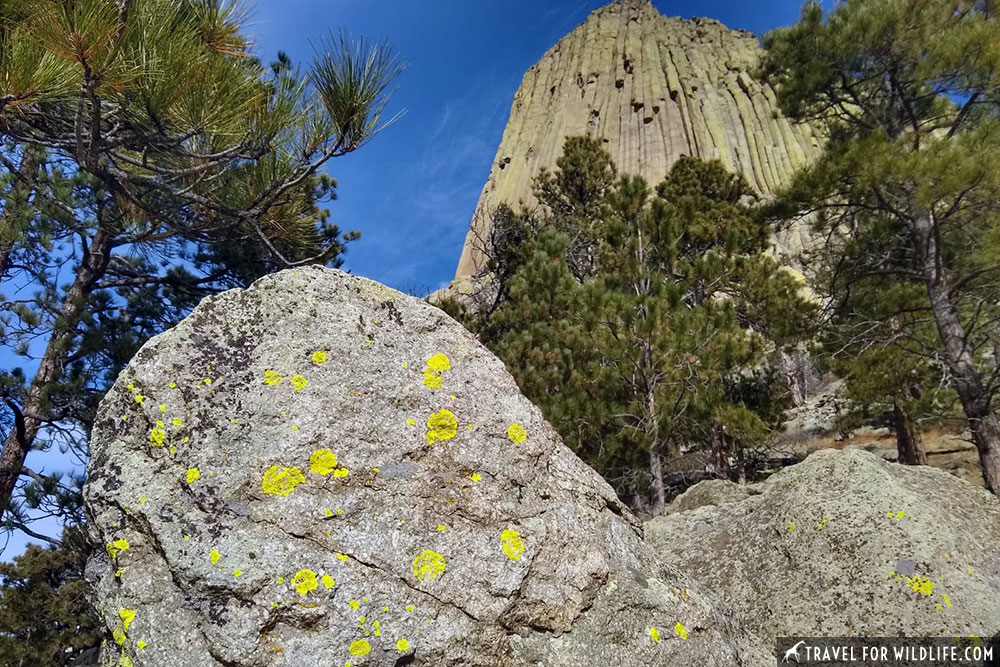 We completed our circuit of the tower and made our way out of the park. In less than 3 hours we had a surprising diversity of Devils Tower close encounters, right in the middle of the day! I would definitely come back again, just to hang out with the prairie dogs. And next time we’ll get a site in the campground and keep our eyes peeled for badgers! 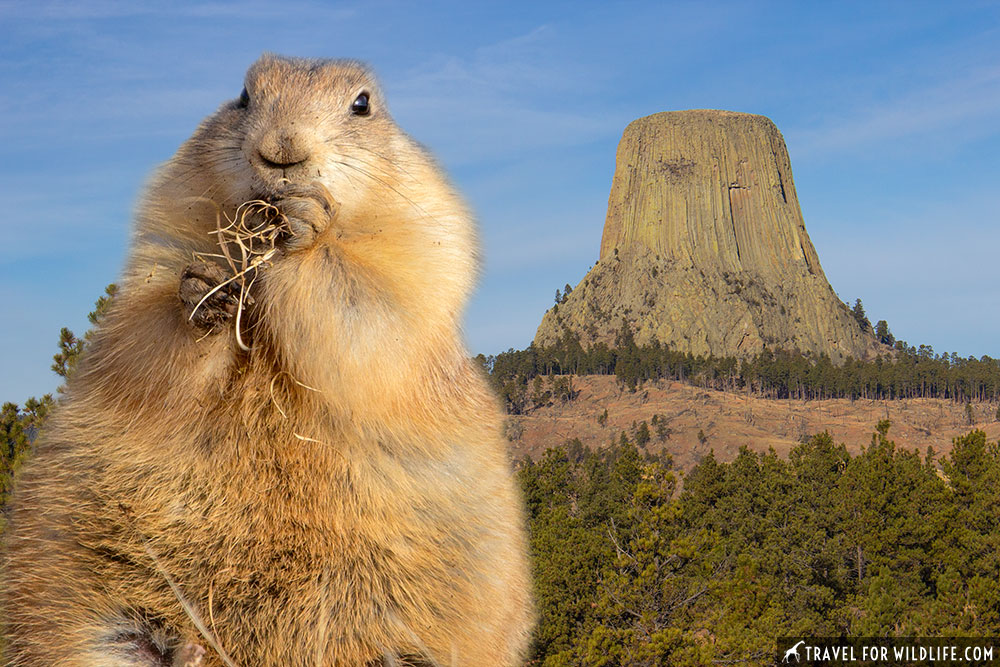