The White Squirrels of North Carolina

Yesterday we decided to take a break from office work and go on a quest to find a white squirrel. Only half an hour away from where we live is a small population of white squirrels in Brevard, NC and it was about time we went to visit them. White squirrels are so famous in Brevard, that they even have their own White Squirrel Festival. 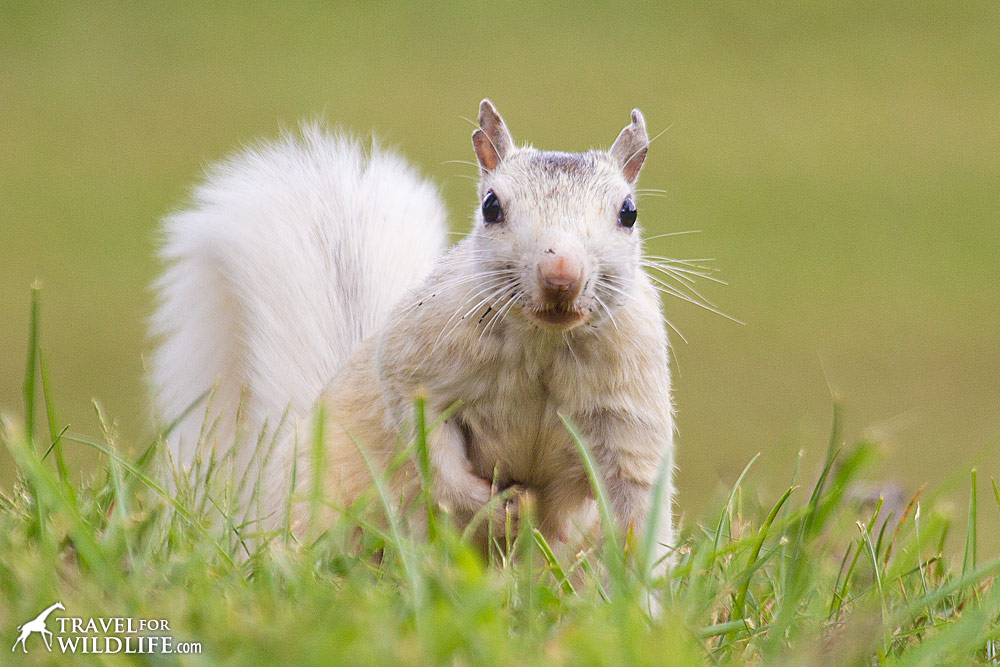 After striking out at our first two locations, we finally hit the jackpot at Brevard College. We noticed that most of them had a grey stripe running down their spine and a gray patch on top of their heads (see photo below). 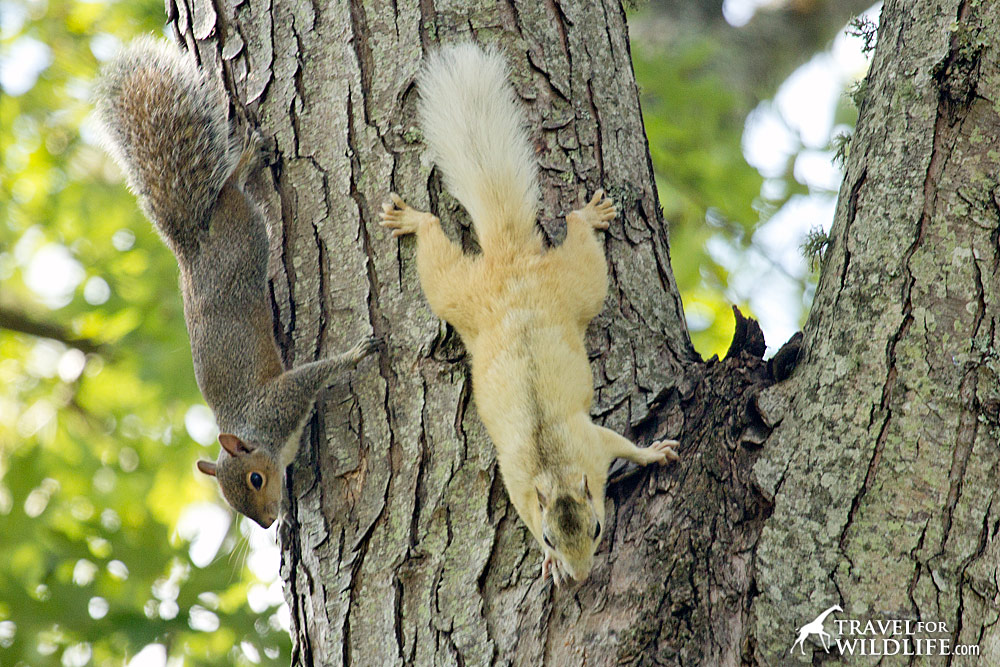 A gray and a white squirrel in Brevard, NC

Are These White Squirrels Albino?

First of all, all the white squirrels in Brevard (and nearly every white squirrel seen in North America) are in fact Gray Squirrels (Sciurus carolinensis), the exact same species we commonly see scampering through the trees here in the eastern United States. So where does the white coloring come from? The white squirrels of Brevard are not albino. Albinism is  a rare condition in which the individual produces no pigment (melanin) in their hair, skin or eyes. This results in the squirrels having white fur and pink eyes.

However, most white squirrels seen in the United States are a white color morph known as leucistic, meaning they have reduced pigmentation of the fur. Unlike albinos, leucistic individuals have dark-colored eyes. Other examples of leucistic animals are the white lions of South Africa and the Spirit Bear in the Great Bear Rainforest, Canada.

However, the Brevard white squirrel is different from each of these. Their fur is capable of producing pigment, but it only does so in a very limited region (the top of the head and center of the back). It is as though the white belly patch of a normal gray squirrel has spread outward to cover most of the body. There are several complex theories on how this may occur. 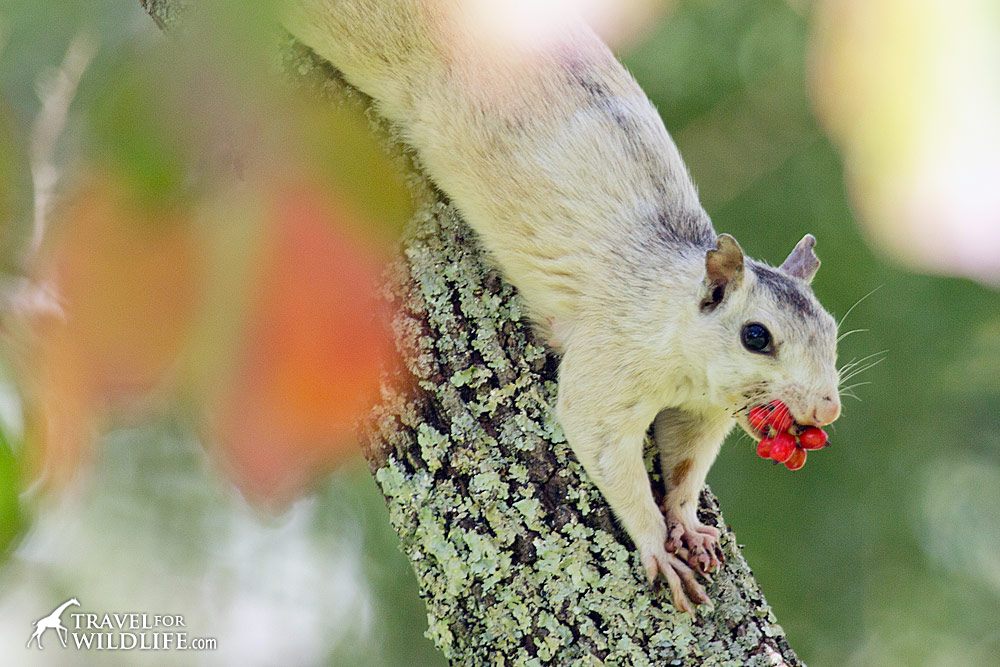 Are There Any Black Squirrels?

Yes, completely black squirrels do exist. They are also a color morph of the eastern Gray Squirrel. These squirrels produce too much melanin, hence their black coloration. Black squirrels are also called melanistic squirrels. Like white squirrels, there are various colonies of them throughout the eastern U.S. and Canada (such as around the zoo in Washington DC.)

Where Can I See White Squirrels in North Carolina?

If you visit in the fall you can spot white squirrels on the ground while they forage for nuts and gather dry leaves to build their nests. 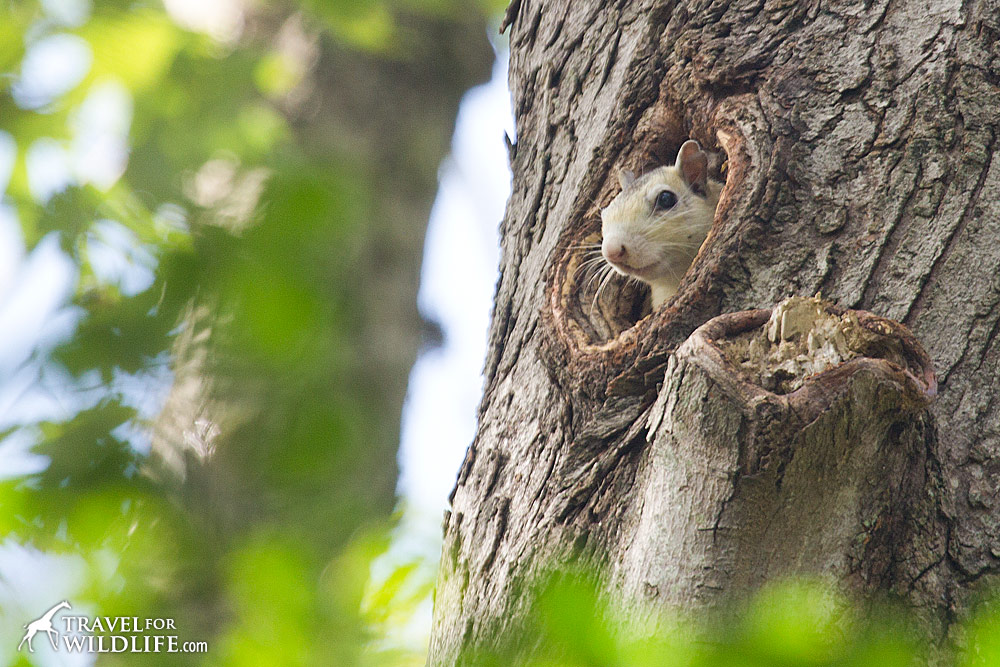 A white squirrel pokes her head out of her nest

The Story Behind the White Squirrels of Brevard

Legend has it that a carnival truck overturned in northern Florida and a couple of white squirrels escaped. They formed a colony in a pecan grove and in the 1950’s a pair was trapped and given as a gift to a Brevard resident. After one escaped, the other was released as well. They reproduced and established the white squirrel colony in Brevard. The carnival truck story is probably an embellishment as it appears that this type of white squirrel (with some gray head and dorsal markings) occurs naturally in northern Florida, but in low frequency. The rest of the story seems quite true and was well documented by Barbara Mull Lang in this Brevard newspaper article.

These animals are so loved in Transylvania county that in 1986 the Brevard City Council voted unanimously to approve an ordinance declaring and establishing a sanctuary for white squirrels.

The ordinance states: “The entire area embraced within the corporate limits of the city is hereby designated as a sanctuary for all species of squirrel (family Sciuriadae), and in particular the ‘Brevard White Squirrel.’ It shall be unlawful for any person to hunt, kill, trap, or otherwise take any protected squirrels within the city by this section.” 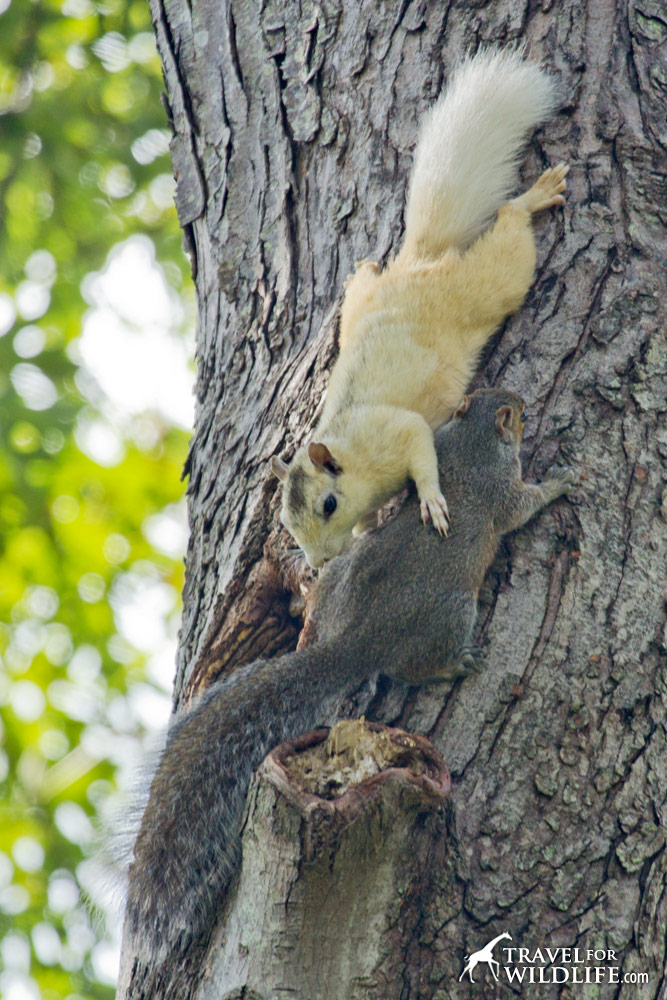 Are There Other White Squirrel Populations in the US?

In addition to Brevard, several other towns claim to be “Home of the White Squirrel” including Kenton, TN; Marionville, MO; Olney, IL; and Exeter, ON. But white squirrels may be seen anywhere within the general range of Gray Squirrels. Here is an excellent map of white squirrel sightings in the U.S. and Canada. But apparently Brevard can boast more white squirrels than any other location with roughly 1000 individuals within the city limits, accounting for an astonishing 40% of the gray squirrel population here.

If you are on a quest to see gray, white ,and red squirrel, you can potentially see them all in the same day! After you’ve spotted gray and white squirrels in Brevard, you can just drive up to Cataloochee Valley which is on the eastern side of the Smoky Mountains National Park. This is the southernmost tip of the Red Squirrel’s range in the eastern United States. If you’re lucky like we were,  you’ll see a red squirrel in the Smoky Mountains. 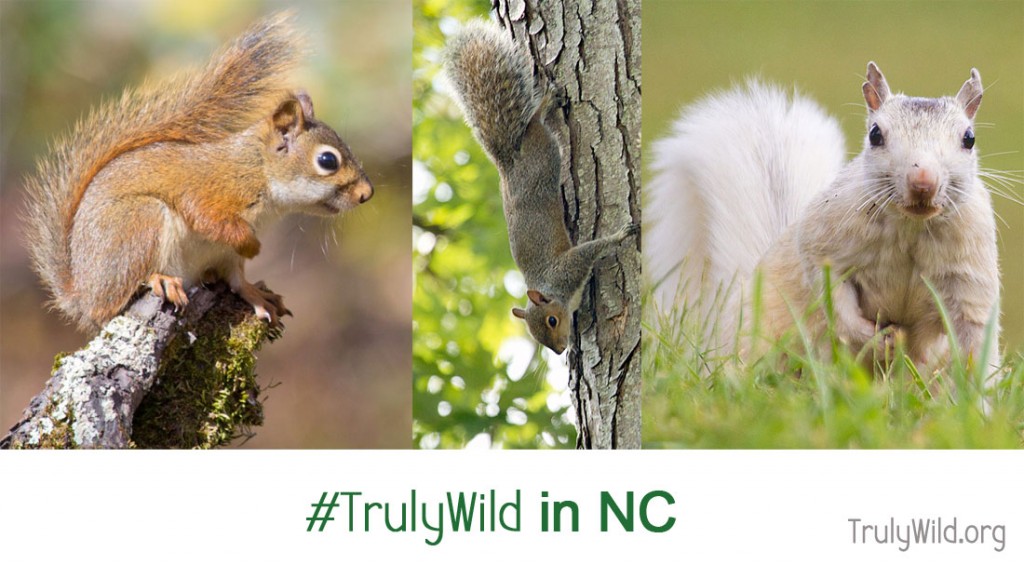 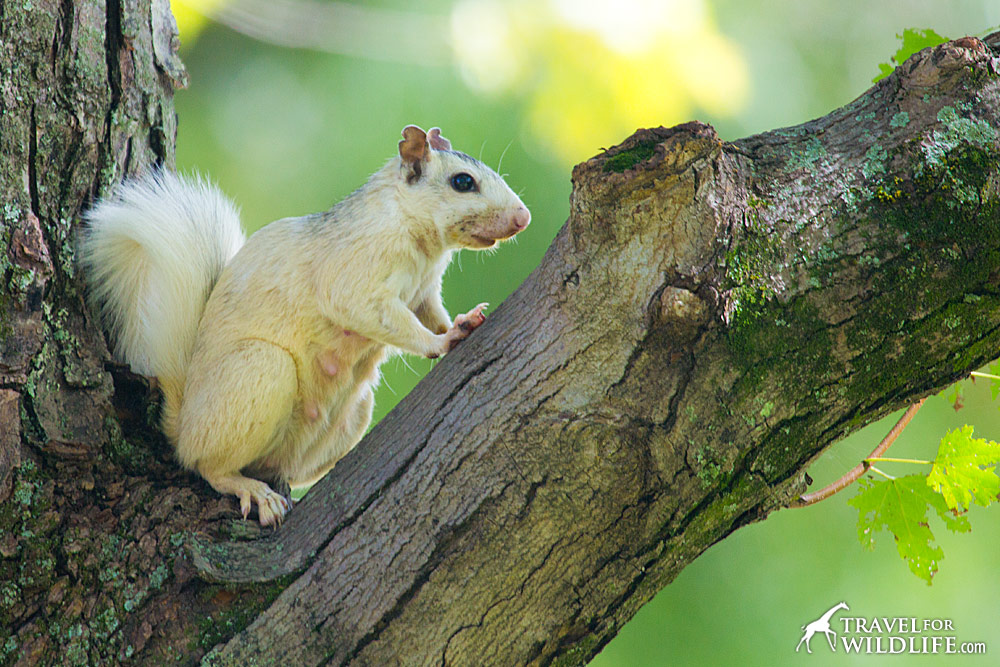 White squirrel sitting on a branch 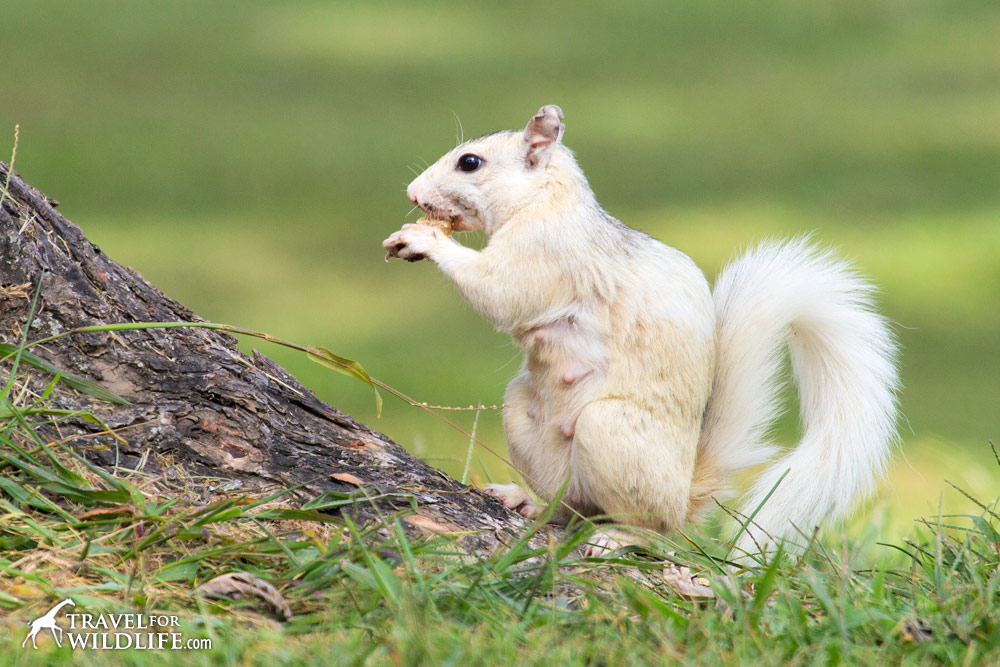 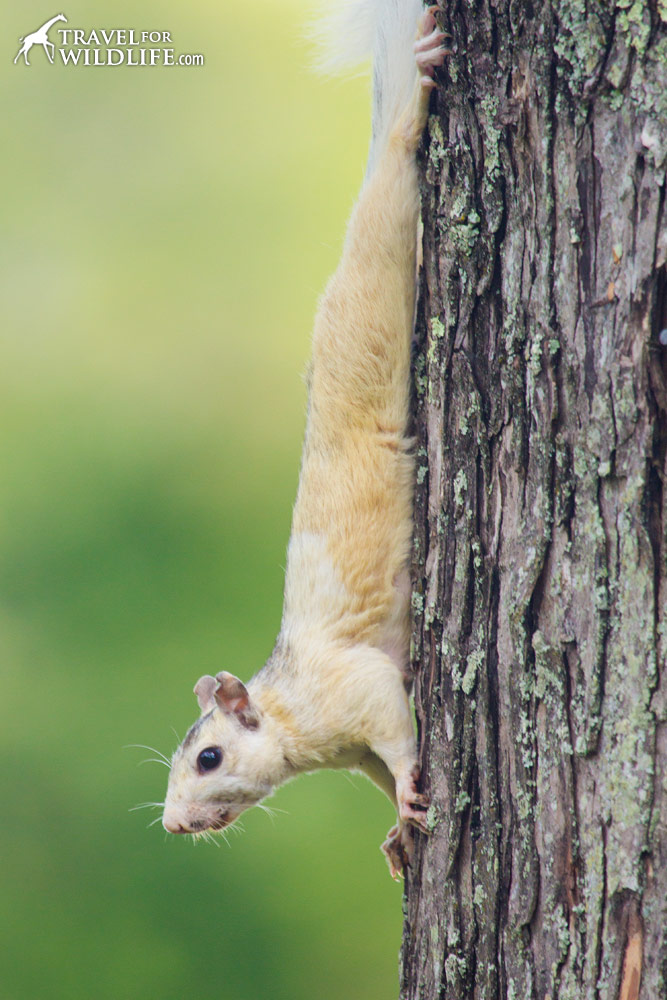 This is a better vantage point 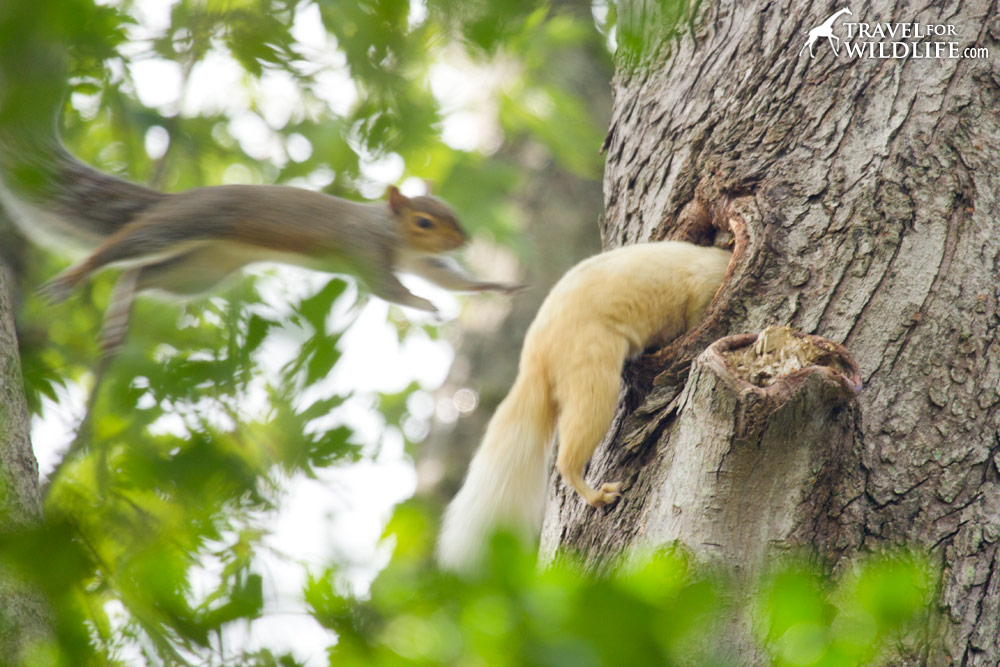 A white squirrel mother and her gray offspring! Mom is putting leaves in the cavity nest. 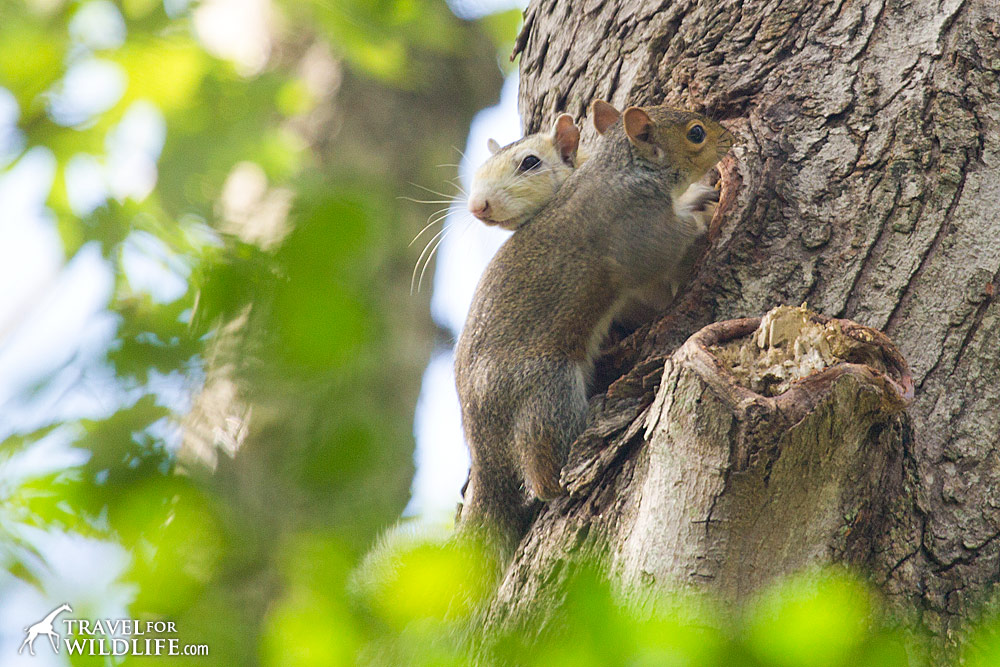 Have you ever seen white squirrels or a black squirrel?