A rare sight: wild beavers swimming underwater. Read on to learn how it happened. 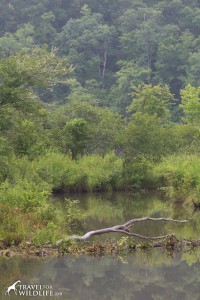 We were standing on a small foot bridge that spanned a pool in the creek. It was a midsummer sunset in the Blue Ridge Mountains of North Carolina and the rich green forest that carpeted the surrounding peaks was tinged with brilliant orange. Small trout were leaping for flies at the surface while a pair of screech owls began to call from a nearby tree. We saw a v-shaped wake appear on the surface of the water upstream, lead by a brown furry head. A beaver! Downstream of us, the dam made a gentle trickling sound as water slowly leaked over the top of the packed mud and freshly cut branches still cloaked with green leaves. As the beaver slowly swam toward us, we held our breaths in anticipation and exchanged looks of excitement. The beaver dove under the surface and, to our amazement, swam directly beneath us, under the bridge and out the other side! We saw it perfectly under the surface, undulating its body slowly and paddling with its huge tail and webbed rear feat. It reminded us of watching manatees gliding beneath us in the canals of Crystal River. We looked at each in shock with huge dumb smiles on our faces. I had never seen a beaver so close in my life and it was a truly beautiful sight.

The beaver surfaced halfway into the pool on the other side and swam to the dam to begin its evening inspection. It crawled up over the wall and into the bushes below, vanishing into the dusk. The spectacle was repeated when a second beaver appeared upstream. She too dove into the water and glided beneath us like a sleek brown submarine, her large leathery paddle of a tail trailing elegantly behind her. She emerged on the other side and swam down a side canal.  I knew then that I had a truly rare opportunity on my hands: the chance to film beavers swimming underwater without disturbing their habitat.

My Dream of Filming Beavers

Beavers exist throughout nearly all of North America, and yet I never see them. They are mysterious creatures that transform our landscapes in the middle of the night, felling huge trees, building massive dams, and creating new ponds and wetlands. Their ability to manipulate the environment is rivaled only by humans. Perhaps that is why they are so greatly admired and hated at the same time.

Personally, I love them. I got my first good look at a wild beaver in Manitoba, Canada during our American Safari last year and I was hooked.

The video I made of a beaver family in Manitoba during American Safari.

I wanted to see more of this giant rodent (the second largest in the world after the capybara!) and to somehow get a peek into their secret world. When Cristina and I started camping in the Pisgah National Forest near Asheville, North Carolina we discovered an active beaver dam. The first evening, when two swam directly beneath us, I knew we were witnessing something special. I immediately fantasized about getting shots of them swimming underwater in their natural surroundings. A month later we returned for six nights of camping and each night I visited the dam to try out my technique.

How I Filmed Beavers Swimming Underwater

I didn’t know at the time that I was about to attempt something that had rarely been achieved outside of BBC wildlife documentaries. But in retrospect, looking around on youtube, I see no other clips of wild beavers swimming underwater. So here’s how I did it.

1) First, of course, we found a location where we could stand unobtrusively above the path of swimming beavers: the bridge. But I soon discovered a small side canal next to the dam with a large fallen tree above, which allowed me to get even closer to the water!

2) Secondly, I attached a GoPro HDHero 2 with an underwater housing to the end of a monopod. In the camera settings I flipped the image over because I would be filming upside down.

3) Finally, I learned the habits of the beavers and waited patiently each evening til one began to approach. Slowly, I lowered the monopod down into the water, in the expected path of the beaver and hoped for the best. 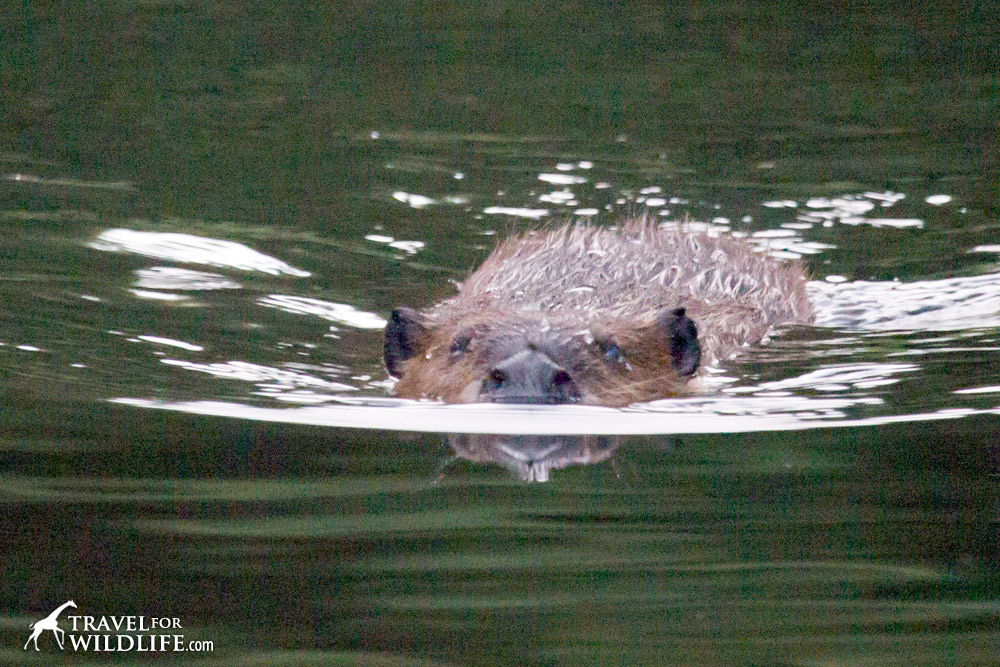 A beaver swimming toward me on the bridge.

On the first night, the beaver outsmarted me and swam to the other side of the pylon that supports the bridge. Undaunted I returned the second night and captured an excellent clip of one swimming very near the camera. On that same evening I discovered the log above a side channel where I got another clip of one swimming just beneath me. Even more to my astonishment, I accidentally captured a shot of one that swam directly beneath my camera from behind me! I didn’t even see him coming.

Each night for six nights I returned and made an attempt in the brief period between their first emergence (usually a few minutes before sunset, around 8PM) and when it became too dark to film (around 8:20). Sometimes I got lucky, but usually I didn’t. My greatest treat was getting to watch the pair emerge on a distant bank and affectionately groom each other in the gathering dusk before beginning the night’s work.

We have begun calling them Jellyroll and Rawhide, in memory of the two famous beavers who lived with the great Canadian naturalist Grey Owl. (Read about our visit to Grey Owl’s Cabin here.) Those two beavers went on to become ambassadors of their species and to sire a new population in an area that had been decimated by the fur trade for hundreds of years. I hope this new Jellyroll and Rawhide will also help open your eyes to the beauty and importance of these fascinating animals.