Where to See Bushbabies in South Africa

When  I first visited South Africa I had heard of the legendary “bushbaby” but had no idea what this strange creature might look like. I imagined something naked and pink crawling around in a diaper. Two days later I went on my first night drive in Kruger without any clue that I was about to catch my first glimpse of the beast.

We were bouncing along in an open vehicle with several other visitors, the cold night air whipping through our hair and chilling our fingers. I was manning one of the two powerful spotlights on board and having an awesome time spotting reflective eyes in the darkness. It was like magic, being able to locate animals that I would never have found in daylight.

I was instructed to shout “stop!” each time I spotted something and our driver would identify the creature: jackal or spotted eagle-owl or scrub hare. And then I spotted something in a tree. Its large round eyes glowed red in the blackness like an owl. “Stop!” I yelled. But suddenly the ‘owl’ bounced sideways. Then it bounced  again, and again, like a ping pong ball hurtling crazily between invisible paddles. When my spotlight revealed the creature it was tiny brown furry gremlin with bat-like ears and round eyes much too large for its tiny face. Then it bounced away from branch to branch, disappearing into the darkness. “That” said our guide, “was a bush baby!” 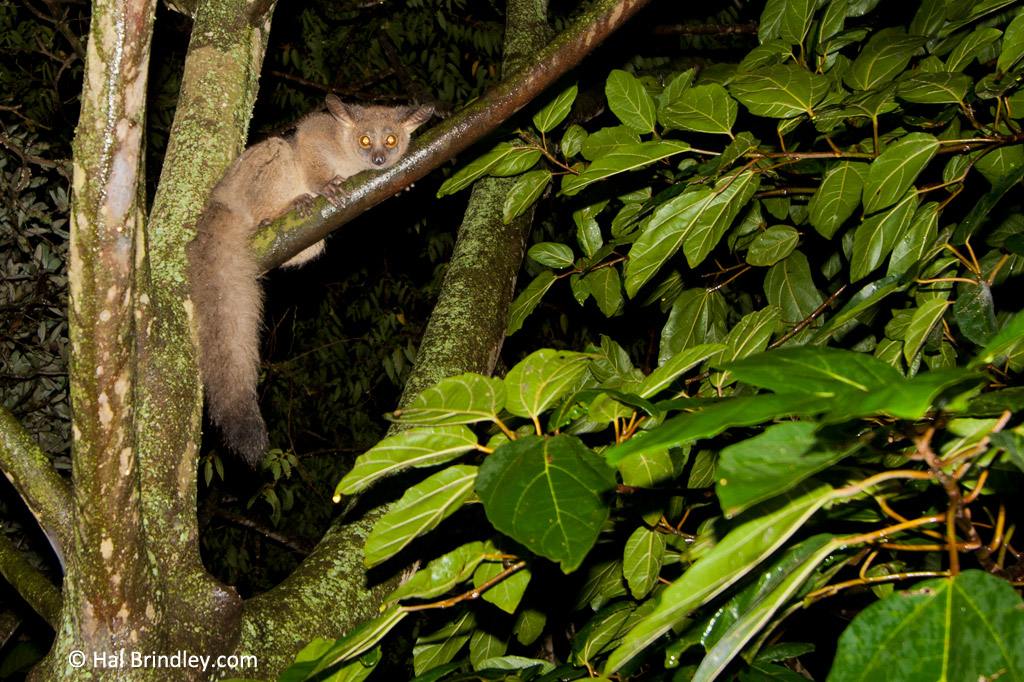 Cries In the Night

It was a Lesser Bushbaby, also known as the Southern Lesser Galago (Galago moholi), and I was absolutely thrilled by its strange behavior and appearance. Yet it wasn’t until several years later that I would run into it’s larger cousin, the Greater Bushbaby (also known as the Thick-tailed Greater Galago, Otolemur crassicaudatus) and finally learn where the name Bush baby came from. Cristina and I were camping along the east coast of South Africa and nearly asleep in our tent when we heard a bizarre wailing cry pierce the silence. It sounded like a mutant baby monster crying for vengeance in a horror movie. Chills traveled down our spines and with wide eyes we ventured out of the tent.

Scanning with our head lamps we spotted a pair of huge eyes staring back at us from the tree above our heads. A wooly cat-sized creature with a bushy tail and ears like satellite dishes eyed us nervously and licked its lips. It crawled away (unlike the leaping lesser) and melted into the darkness. Its haunting cries kept us awake for ten more minutes before it moved off on its nightly rounds. 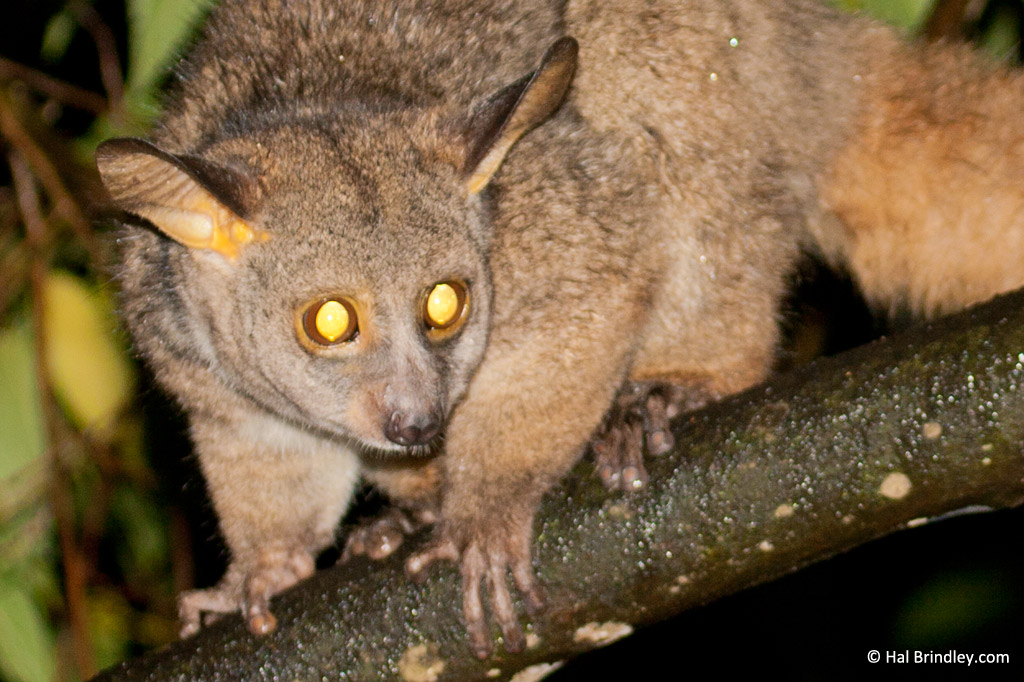 What Is a Bushbaby? 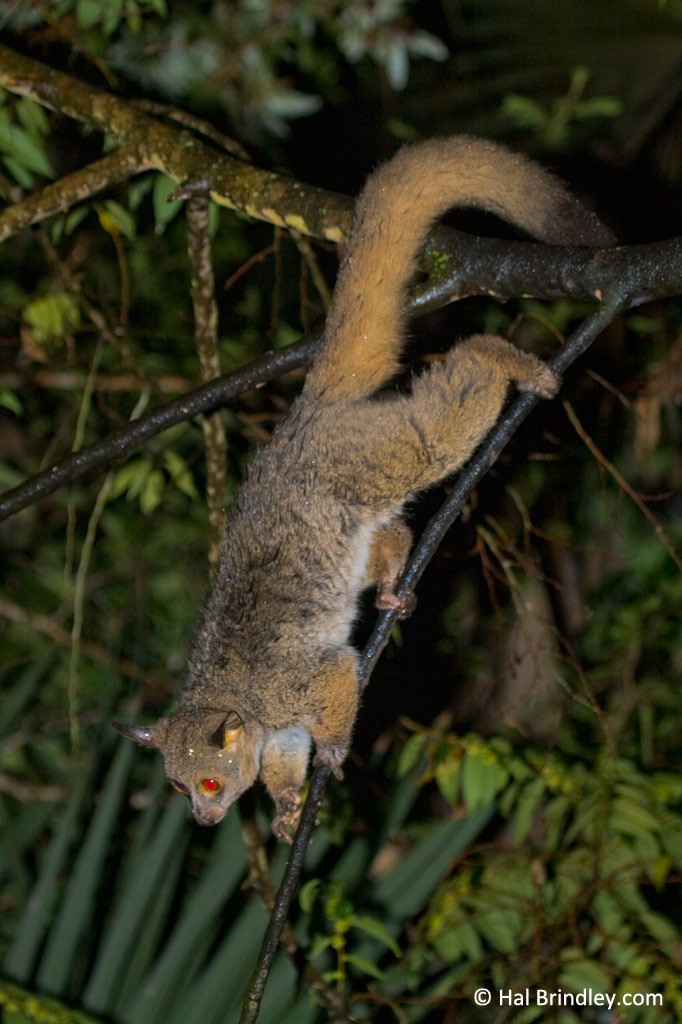 Greater Bushbaby climbing through the trees

A bush baby is not actually a furry gremlin. It is a primate like you and me. Generally known as Galagos, the bushbabies are prosimians (like the lemurs of Madagascar) and are members of the Lorisidae family along with the Pottos (another furry tree-dweller). They are nocturnal feeders with a diet consisting of fruits and insects. The smaller the galago species, the higher the percentage of insects consumed. The larger galagos like the Greater Bush Baby cannot catch enough insects to entirely sustain themselves. Another common food source is gum (tree sap).  To me, one of the most fascinating things about watching bushbabies is that it’s like visiting with your great great great (times two million) grandfather. Bush babies are the closest living representatives of the earliest primates and some are nearly indistinguishable from 55 million-year-old fossils.

Where to See a Bushbaby in South Africa 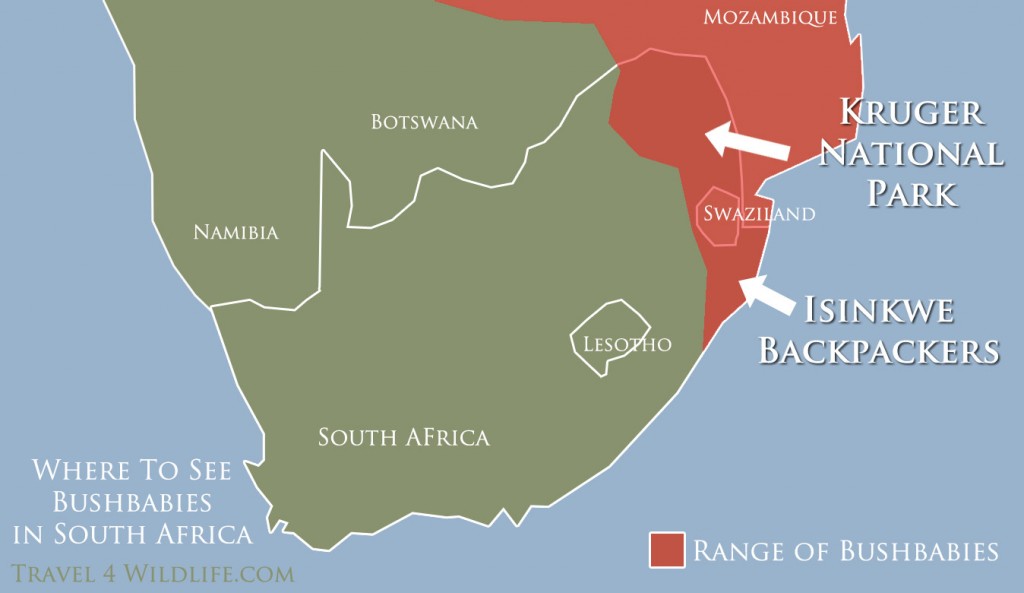 Map of where to see bush babies in South Africa

We’ve had our best luck spotting bush babies in two places. The first was Isinkwe Backpackers near Hluhluwe in KwaZulu Natal. There’s a good reason why it’s easy to spot bushbabies at Isinkwe, they feed them. As a rule we don’t approve of feeding wildlife, though the staff assured us that they are only given a small amount of fruit so as not to change their natural foraging behavior too drastically. The chopped fruits are placed on small feeding platforms in the trees right next to the lodge shortly after sunset. A small group of Greater Bushbabies shows up soon after and devours the fruit within ten minutes. Then they move off to continue foraging. This is about the only time I’ve taken a decent photo of a bushbaby. Isinkwe is a great place to find reasonably-priced lodging in a lush jungley atmosphere within close reach of Hluhluwe-Umfolozi Game Reserve, Mkuze Game Reserve, and Greater St. Lucia Wetlands Park. 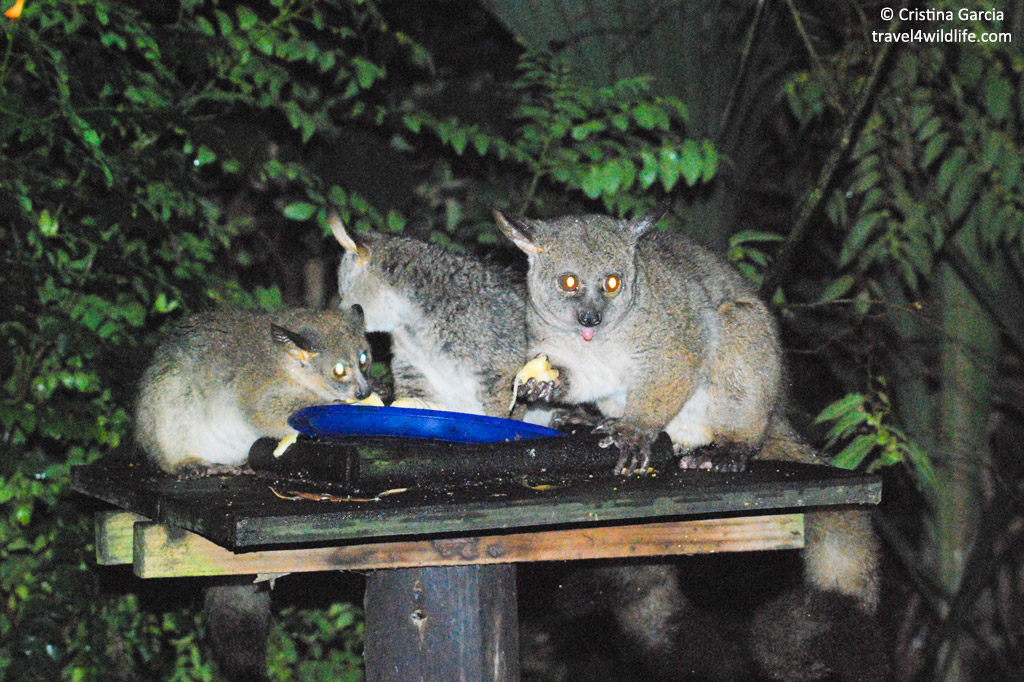 The other great place to spot bushbabies is in the campgrounds of Kruger National Park. Though you may spot both lesser and greater bushbabies on the night drives, you’re far more likely to track down greater bushbabies in the campgrounds. That’s because you can listen for their territorial screaming-baby sounds. (The lesser bushbabies are far less audible.)  Simply grab your headlamp and stroll around the campgrounds after dark. Don’t worry, you won’t get eaten by a lion because the campgrounds are fenced in. Scan the trees for eye-shine as you walk and listen closely for shuffling or crying. We find the best technique is to simply go about our business in camp until we hear one calling, then begin our search. They tend to move quickly through an area so don’t wait too long. Some of the camps where we’ve seen or heard bushbabies include Skukuza, Letaba, and Punda Maria. 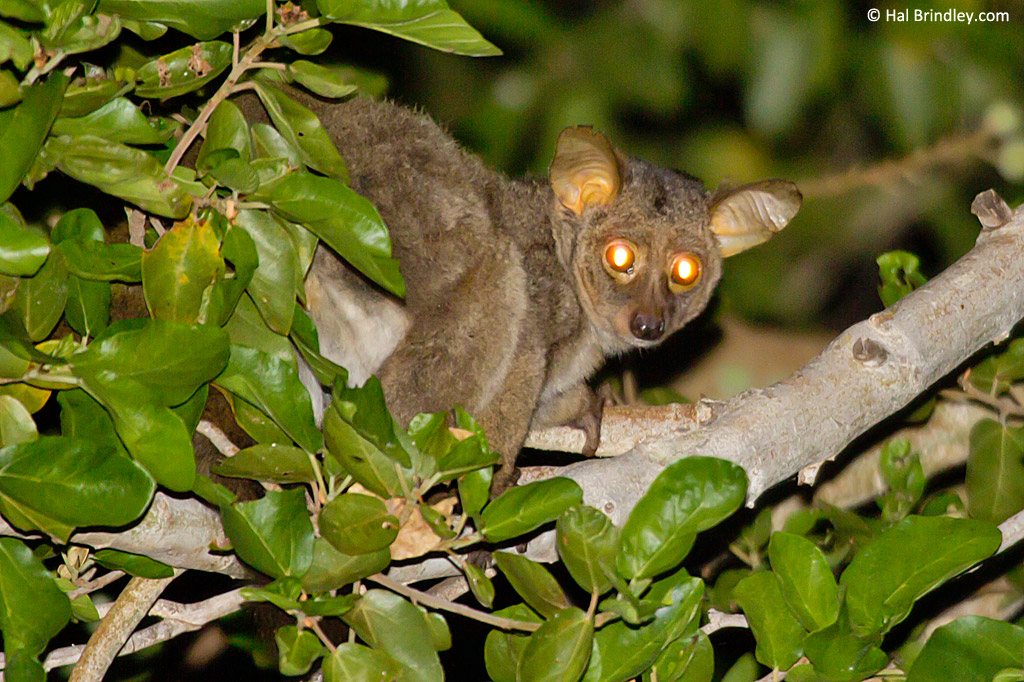 If you’ve seen bushbabies on your travels in South Africa, please leave us a comment and let us know where!