The One That Got Away

Out of all my wildlife travels, the moments I remember most clearly are the rare and unusual glimpses into animal behavior. Things that are not normally seen on any given day. Thinking back to our last trip in Africa four years ago, it all becomes a blur of hooves, claws, and feathers. Yet I remember a few individuals vividly: the leopard that spied on us at our campsite one night, or those crazy lion cubs that chased our car down the road at dusk. Those memories are stuck permanently in my memory lane because these kind of sightings are rare and they probably won’t ever happen again.

One such individual I’ll never forget was a zebra. The one with the huge slash on her flank and the clear marks of a big cat’s claws in her flesh. One of the claws managed to penetrate her skin and tear her open right down to the bright red muscle beneath. Dried black blood dripped down her leg. She had clearly just survived a near death experience the previous night, and yet she now grazed peacefully with her herd. 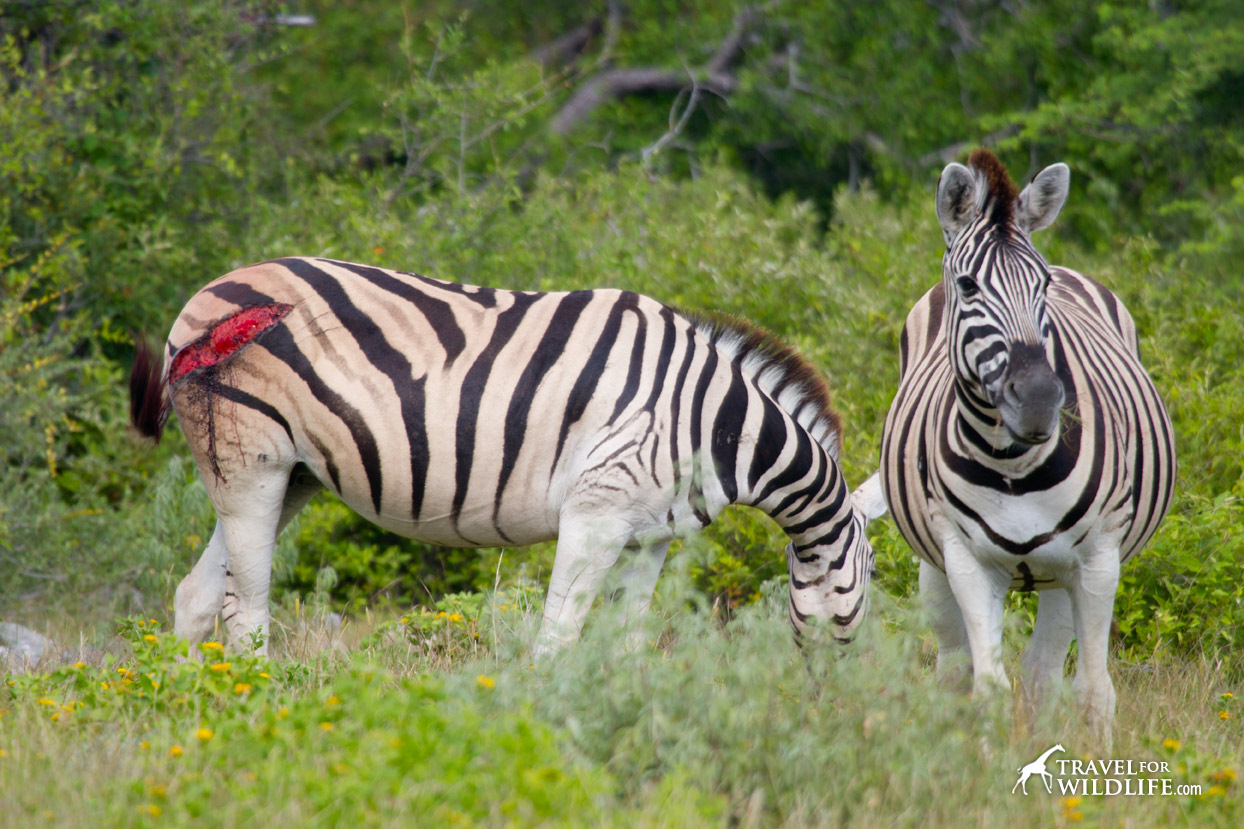 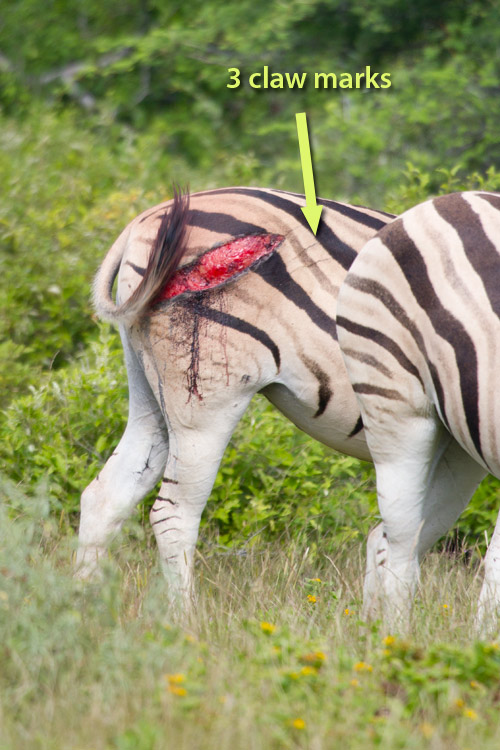 3 claw marks are clearly visible on the zebra’s backside

We were in Etosha National Park, Namibia on our regular morning drive when we saw her. She moved quietly among her heard, but she was not just another zebra. She was a survivor. She would forever be tattooed with the proof. While Hal and I were tucked safely into our sleeping bags, she was having the fight of her life. She was attacked not far from our rest camp, probably by the Chudop lion pride that reigned in eastern Etosha. We knew these lions were successful hunters because each morning we discovered a new zebra carcass, already being scavenged by hyenas, vultures, and jackals. The lions were always napping nearby with full bellies. 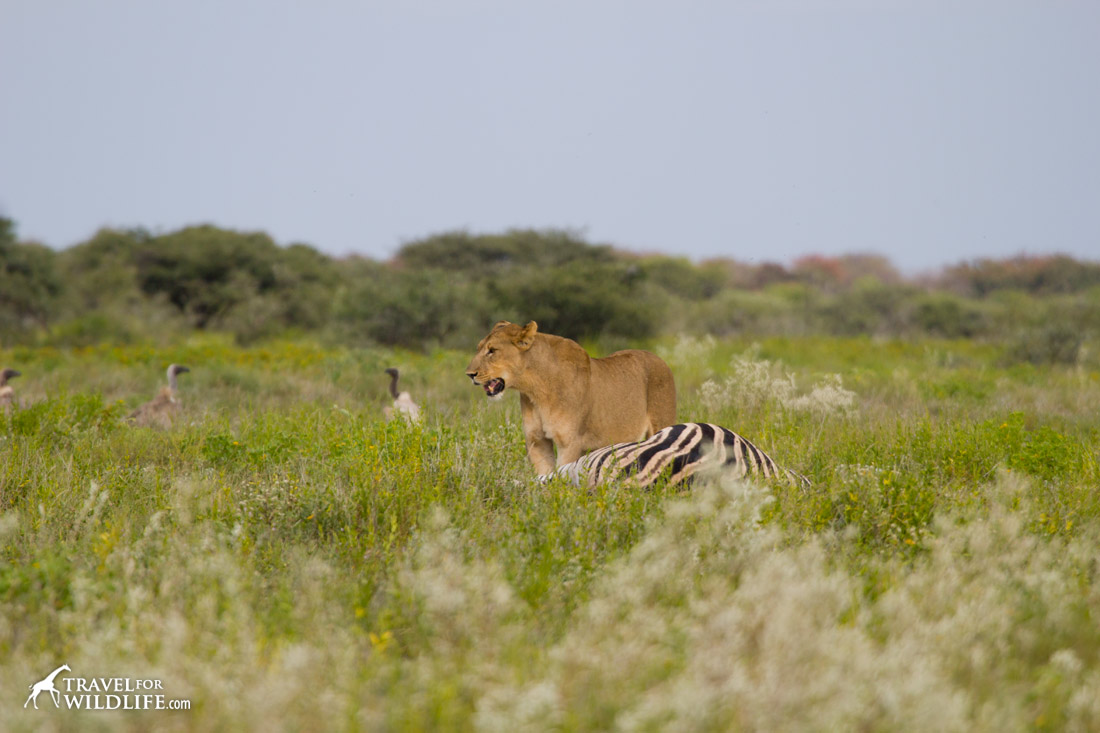 A lioness from the Chudop pride by a zebra kill

But this special zebra had somehow evaded the mighty lioness who had launched herself upon her back. This morning she didn’t limp, not a single leg muscle twitched in pain. We sat for a while and watched in awe. But it’s not surprising I suppose. Prey animals are masters of hiding their infirmities. The weak, sick, and injured are often the first to be taken down by predators. 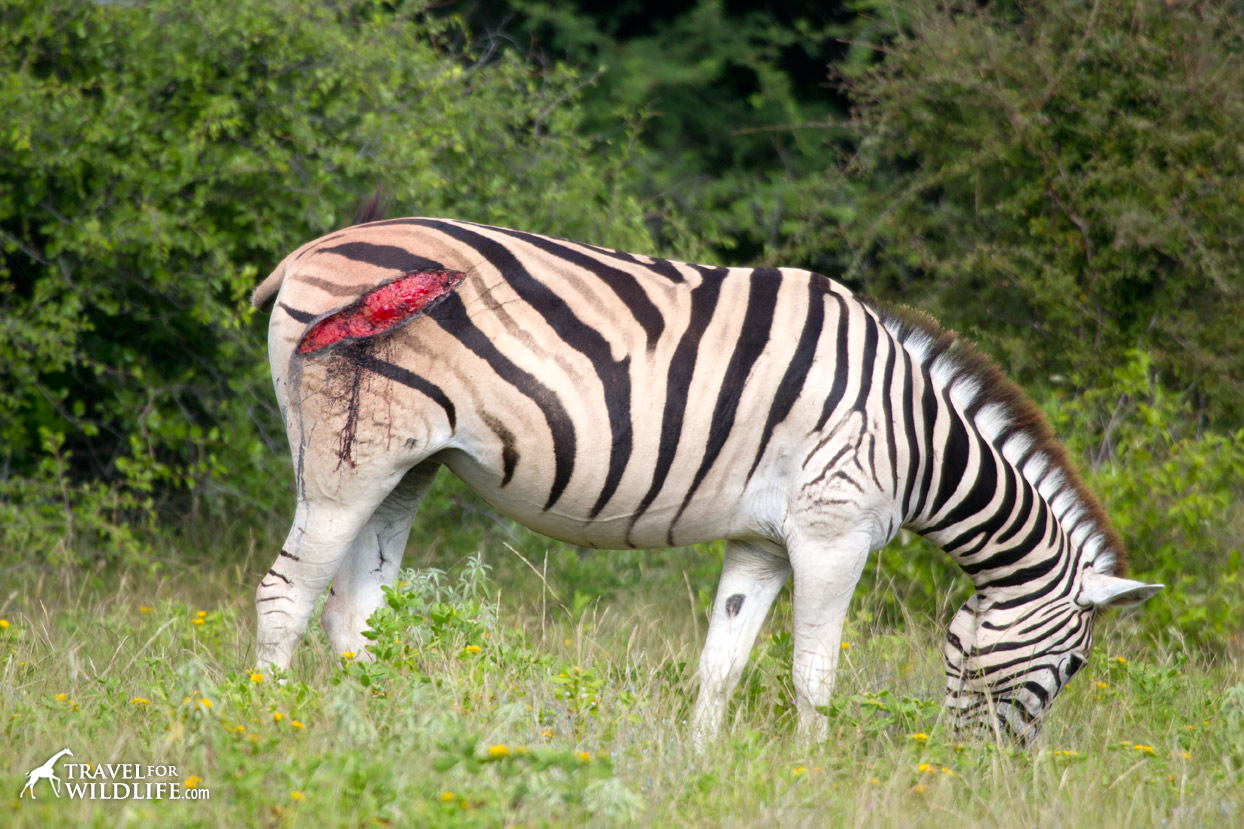 Business as usual for this injured zebra

Zebras are strong animals. Their long tails are perfectly designed to drive flies away from rear flank wounds and to prevent them from laying eggs. As we watched her flicking her tail, we knew she would be OK, her wound would heal soon and she would carry on with her life as if nothing had happened.

After that morning we started watching for other zebras bearing the marks of a lucky escape. One day we found another, a female who had clearly survived a traumatic lion injury and somehow managed to heal.  She even went on to raise a foal of her own. 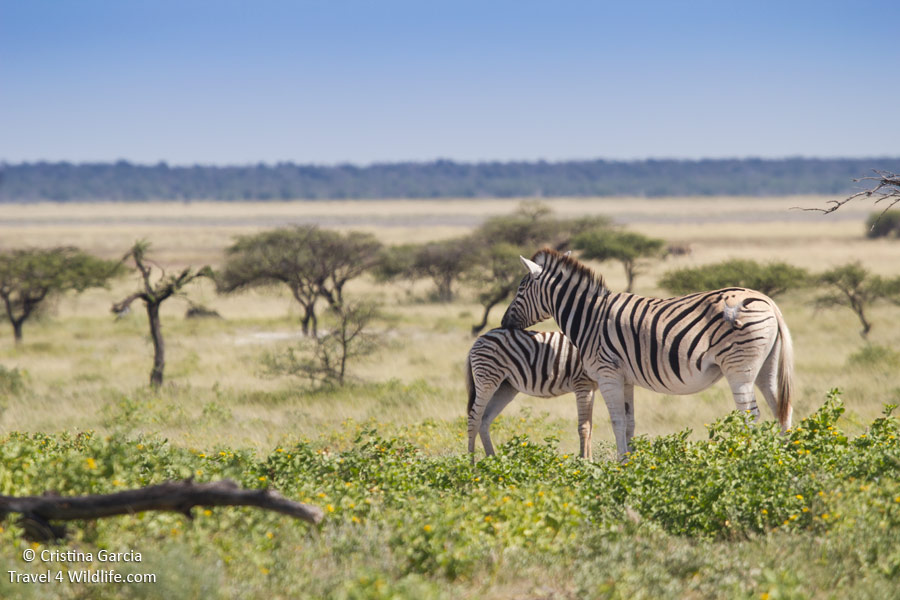 The scars on this mother zebra’s flank prove she survived a lion attack and lived on to raise a foal of her own.

Although it has been four years since I saw her, every once in a while I find myself thinking about that zebra and wonder what has become of her. I remember what a survivor she was, and how fragile yet so resilient life can be.