Dining Under the Stars with a Leopard 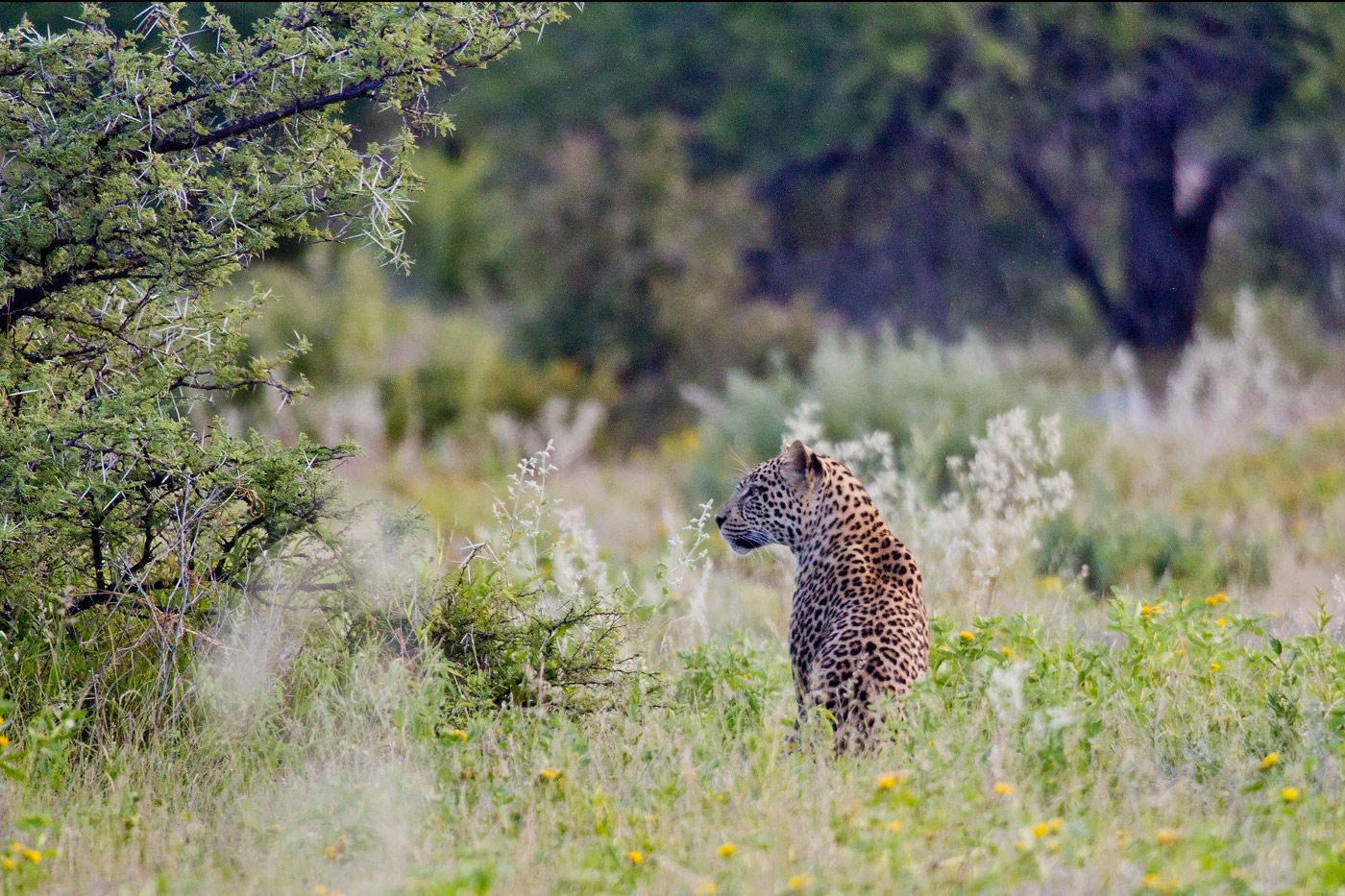 Watching predators in the wild is one of my favorite things to do. But when a predator surprises me and sets my heart rate to a dangerously high level, that is one of my top-rated experiences. And that’s exactly what happened to us in Namibia a few years ago.

We were driving around the country for three weeks and decided to stop at one of my favorite places in the world, Spitzkoppe, just an hour from the Atlantic coast. Spitzkoppe is a huge granite outcrop that stands alone in the desert. Secluded campsites nestle around its base. Brilliant sunsets bathe the giant orange boulders with burning golden light. 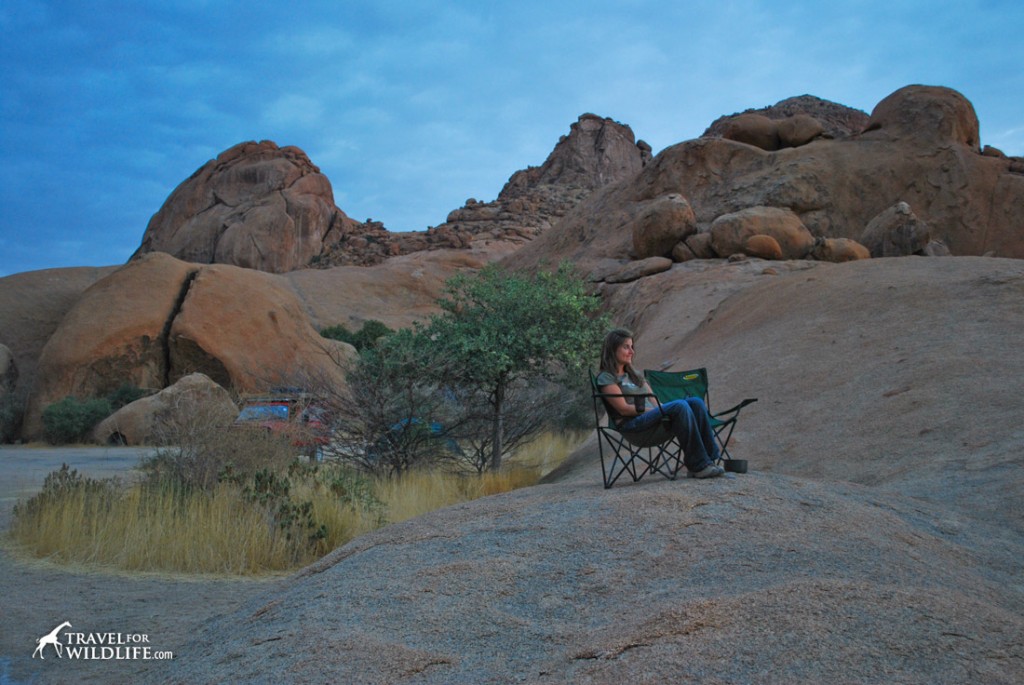 Watching the sunset. Unbeknownst to us, someone was creeping on the boulders to my left

We set up camp, we watched the magnificent orange sunset, and then the night crept in. It is one of my favorite moments of each day that we spend camping; the moment we blend into our surroundings and become night creatures. The moment when every noise becomes a lethal predator in our minds. We could cheat nature and bring powerful lights, but that is not why we are here.

That night, Hal’s little headlamp was our only illumination, helping to insure we had a bug-free dinner. I am not a fan of a noodles with flies. Our two dining chairs were placed between the car and a big boulder to protect us from the wind. This boulder is part of the outcrop from which everyone watches the sunset. That magnificent Spitzkoppe sunset. 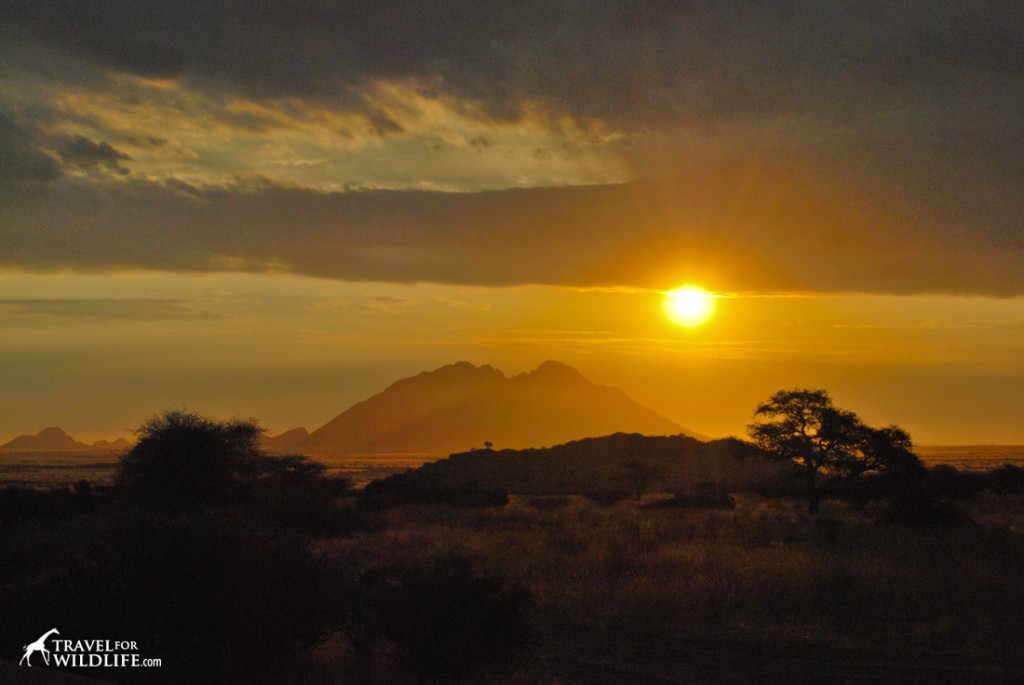 Some evenings we hardly say a word while dining in camp. We are not big talkers; sometimes we feel more comfortable sitting quietly and smiling at each other and listening to the night. That night was one of those nights. Just another quiet night in the wild heart of Africa.

During dinner I looked up behind Hal. It was a moonless night but the stars were bright. I could make out the shapes of boulders. I could even see the two trees that guarded our pit toiled, some 30 feet away. I stared at the shapes long enough that I made a mind map of them. I turned to say something to Hal. Then I looked up again. Something wasn’t right.

“That’s weird. I swear those stars weren’t there five minutes ago.” Two had magically appeared.

I looked up again and they were gone. Hhhmmm perhaps there’s a cloud passing by. 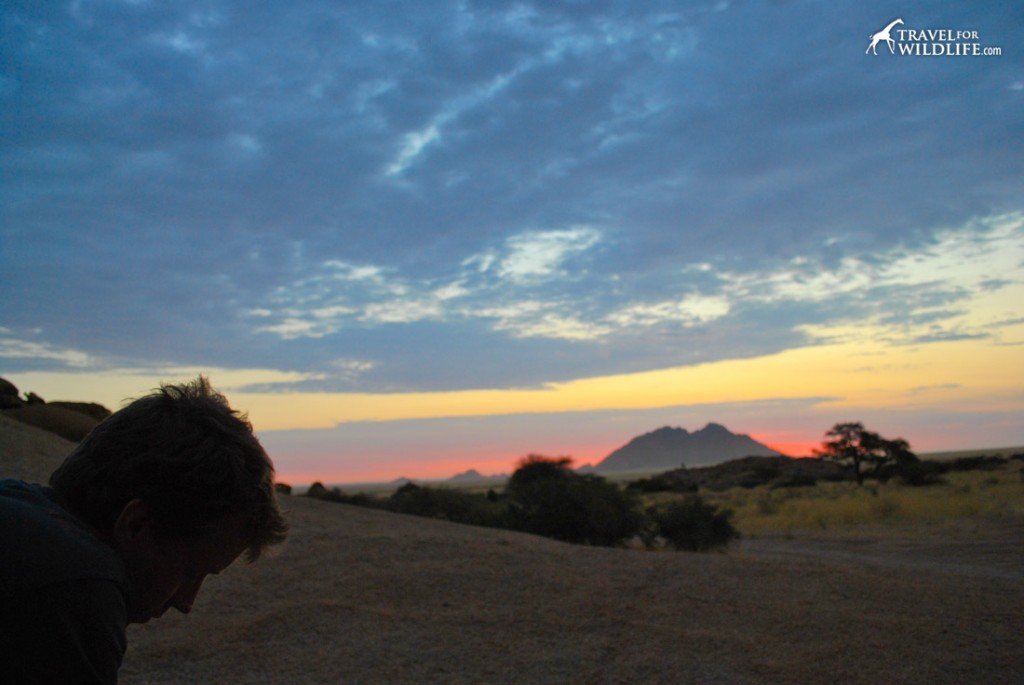 I almost fell off my chair when I took this picture

After dinner, Hal got up to look for something in the car while I sat in total darkness. I was daydreaming. Then a familiar sound made me jump in my chair. That deep sawing sound. The territorial call of a leopard. And it was very close.

“Crap. A leopard!” I shouted at Hal while I ran to join him next to the car.

“What? Nah, I think it sounded more like an ostrich booming.”

“An ostrich? No, no, no. THAT was a leopard. That was definitely a leopard. And it sounds really close, right where those people are camping.” I point to some sites located at the base of Spitzkoppe about 1,000 feet away.

I was starting to get nervous and adrenaline was flowing through my body. I grabbed my tiny headlamp to scan our dark campsite and I shone it up at the top of the boulder behind us. A pair of eyes shone back.

He glanced up. “Those are just stars…”

He didn’t believe me. “They’re not stars, someone is up there. Bring the spotlight! I can’t see with my headlamp.”

While Hal searched for the spotlight buried somewhere in the car, I continued to survey our surroundings, just in case there were more pairs of eyes. My battery was dying and I could hardly see a thing. No, there was only one pair, the same pair, still fixed on us.

My heart was pounding. I backed closer to the car to make sure nothing would pounce on me from behind. Finally, Hal came out with the spotlight and jumped on the car platform to have a better view. Hal had built a platform and attached it on top of the car for us to set our tent on. We didn’t have enough money to buy a roof top tent, so this was the next best thing. The boulder where the eyes were floating was about 20 feet high. Whoever was watching us was only about 40 feet away in a straight line. We will have a better view from the top of the car.

Hal passed the spotlight to me so I could direct him to where the eyes were. I shone it on them.

“I don’t know, I can’t see it properly from down here. You try.”

I handed the spotlight to Hal who directed it toward the cat. It was definitely a big cat but I couldn’t see any spots. It was colored like a lion. A lion? In Spitzkoppe? It couldn’t be. “Is it a lion?”

It was a big cat, it had spots and it wasn’t a cheetah. That leaves only one option. A leopard. This meant there were two leopards around. One in front of us and another one calling from somewhere behind us. 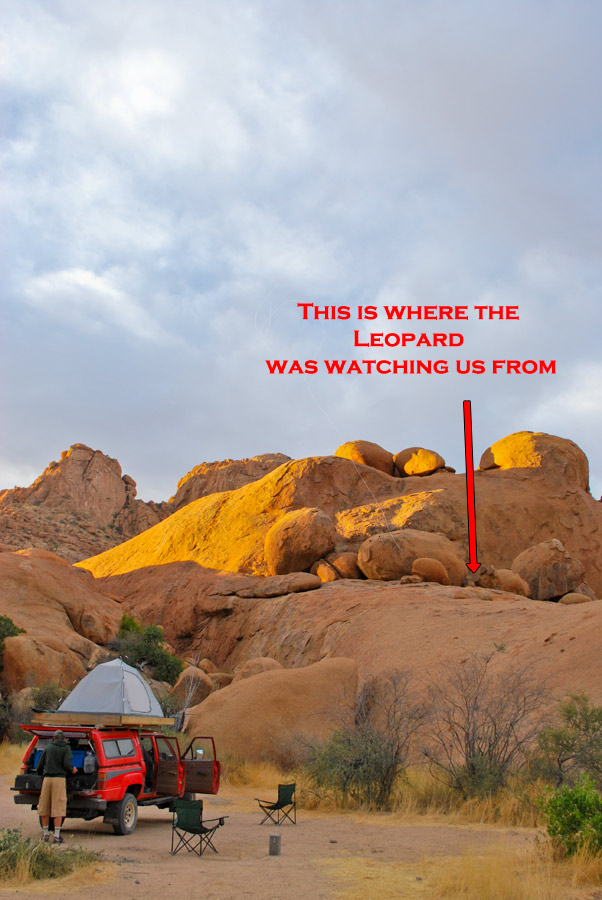 The moment was perfect. This is what I came to Africa for. To see predators and feel a part of their world. I was so amazed I was paralyzed. I didn’t run or try to hide. I just stood there and watched the leopard watching us. I didn’t feel threatened by her, she was so beautiful and so peaceful looking. I was hypnotized. Perhaps she was the reincarnation of Kaa, the hypnotizing snake from The Jungle Book. Would I be able to get into the car anyway if is she decided to come after me? Probably not.

During our two days in Spitzkoppe we had come across several big cat signs: scats and tracks. But we never would have dreamed we would end up looking at one face-to-face. Even leopard researchers consider themselves lucky to have a glimpse of them in the field. Trying to find an un-collared leopard outside a game reserve or a national park is like finding a needle in a haystack. Almost impossible. I felt extremely lucky and honored to be having this encounter. 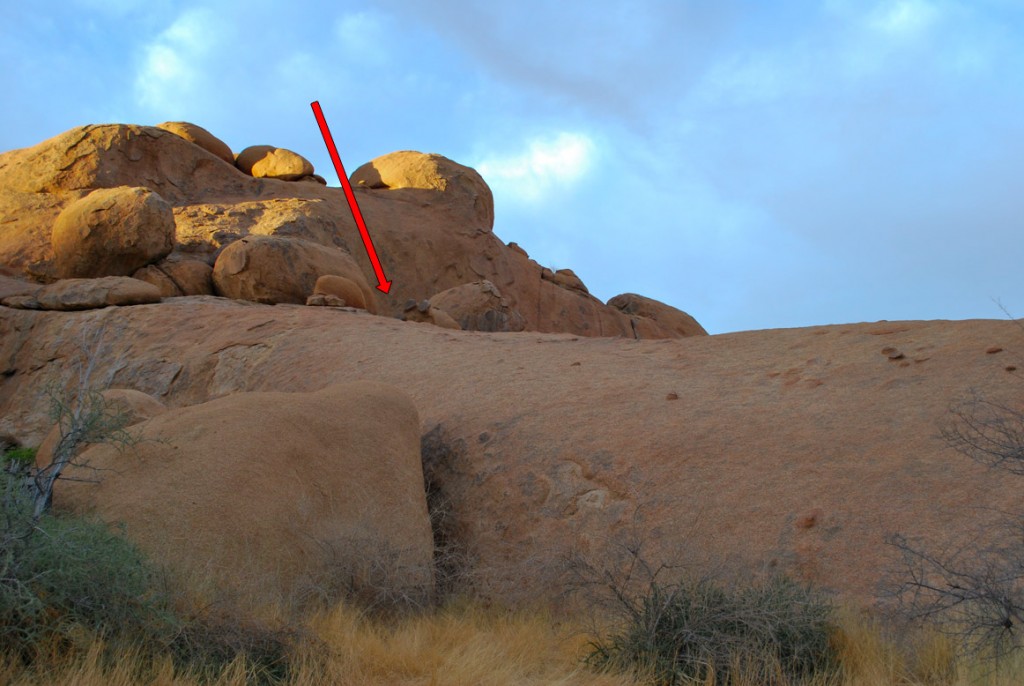 View from my dinner spot and where the leopard was

This is what I like most about Namibia and particularly this area, Damaraland, in the North West corner of the country. Cheetahs, leopards, lions, elephants, gemsbok, zebras, ostriches, meerkats, jackals…they all live outside protected areas. Wildlife is not confined to reserves like in other countries. You see them from your car while driving or even when you go for a walk.

I finally woke up from my trance.

“We should tell the other campers there are leopards around and to watch out. Oh, and by the way, I want to sleep on the platform tonight. I cannot believe we slept on the ground last night with leopards right next to us!”

I thought back to the night before when Hal got up to relieve himself in the middle of the night. He was naked when he stepped outside. I started laughing.

“Do you think the leopard was watching you last night and has come back for more?”

We both laughed. She was still gazing at us from her granite throne. Did she just wink? Perhaps she was also remembering last night.

It was an incredible moment but we thought we should warn the other campers. After all, it doesn’t hurt to be prepared.

We found four groups of campers and each gave us a different reaction.

A German couple in their late forties. “Oh my god! A leopard! What do we do?” They looked a bit scared. We told them just to be aware of their surroundings, do not walk in the darkness. But it is ok to sleep in the tent; we don’t think leopards go in tents.

A young couple, probably English. When we ask if they heard the leopard calling right next to them the young woman replies, “Oh I thought it was a donkey!” A donkey?

Two Namibian men in their late fifties. “A leopard? In your camp? I am a cat man. I love cats. Where are they?” He goes off by himself with his big spotlight to try to find them. He disappeared behind some bushes.

Having given the heads-up to our neighbors we went back to camp to find that the leopard had jumped to another boulder on the other side of our site and was lying down, still peering intently. We could only see her head and two front legs, hanging down over the edge of the boulder like a sentinel lion.

We watched her for a few minutes. She watched us back. Eventually she got bored and stood up to stretch. She strolled gracefully down the steep side of the boulder, leaped to the ground, and disappeared into the night.

Our spotlight had died. We could see the beam of the Namibian’s spotlight in the distance, desperate to catch a glimpse of these elusive cats.

We quickly lifted our tent off the ground, sleeping bags and all, and boosted it up onto the roof-top platform. I felt safe up there, even though jumping onto our  car platform would be a simple feat for a leopard. I was so high on adrenaline that it was impossible for me to sleep. I opened the flimsy tent door and sat on the edge of the platform, my legs dangling like a kid on a swing set, and stared at the boulder where we saw her disappear.

“Oh my God, did you see her? Did you?…She is so beautiful!…That was amazing!…I cannot believe we just saw a leopard!” 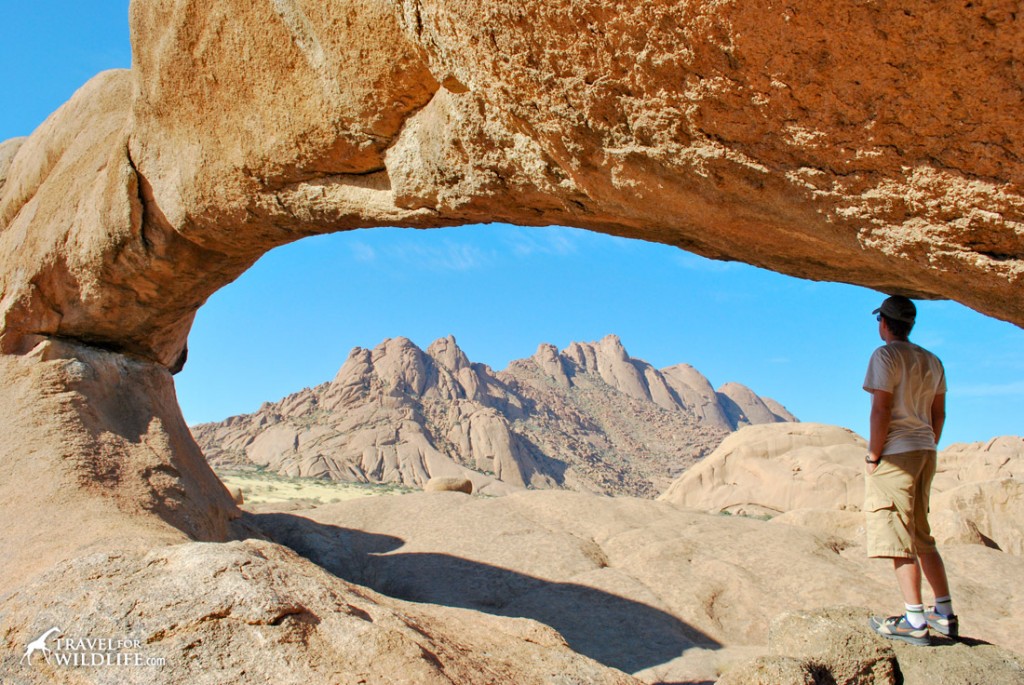 Even when you think you are alone, someone is always watching you.

If I think back to all the times I’ve seen a leopard, this is the encounter that I relive over and over again. It was unexpected, calm, and a very wild encounter. I really don’t care we couldn’t take any photos (Hal’s camera was broken and it was too dark for me to take one anyway). And perhaps it wasn’t the first time that leopard sat and watched us.

When camping in the wilderness be aware of your surroundings. There is always someone watching over you. 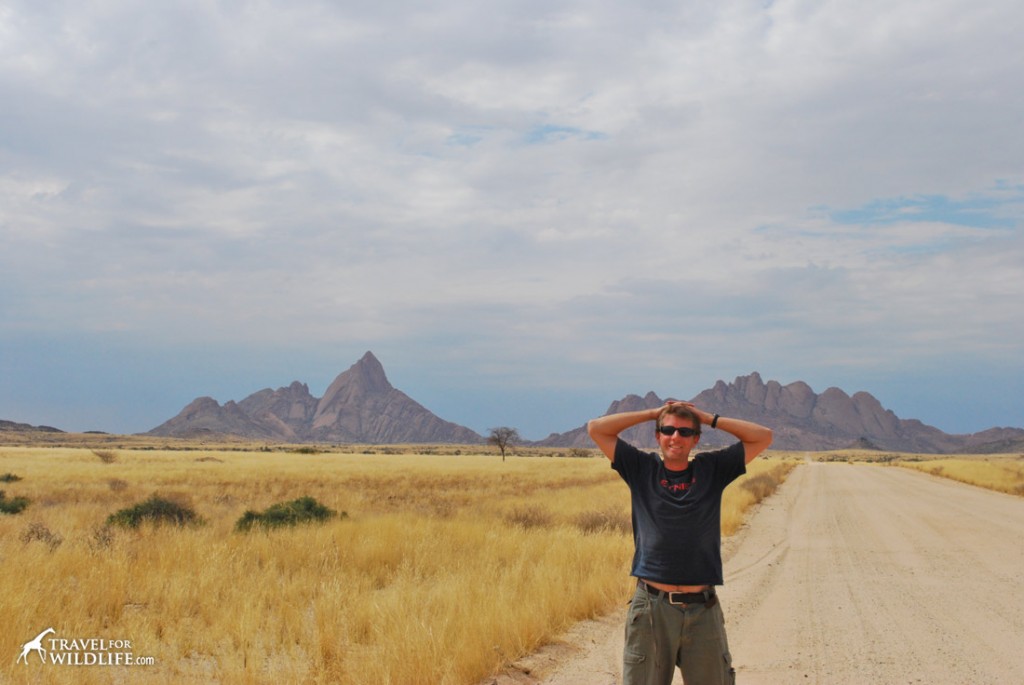 The road to Spitzkoppe