When we visited the Great Bear Rainforest a couple of years ago we were hoping to see grizzlies and, if we were very lucky, a wolf or two. But once we arrived we discovered a whole new world, the incredible underwater diversity of the Great Bear Sea. It was the perfect place to shoot an underwater time lapse.

We were staying at the fabulous Nimmo Bay Wilderness Resort  (you can read our review of Nimmo Bay here) and on one of our outings we were taken to a magical place, one that Fraser (owner of Nimmo) called The Aquarium. This tiny hidden bay is tucked in one of the wildest corners of Canada. Its beach is actually an ancient shell midden, created over thousands of years by First Nations natives. The reason why this place is called The Aquarium is because of its crystal clear waters and the variety of life that lives in it. We stopped our motor, floated quietly, and looked down. At first, it was just a blur of shapes and colors, but soon we started identifying one creature after another. Sea stars, sea cucumbers, nudibranchs, fish, crabs, anemones, and the biggest jellyfish I’ve ever seen. 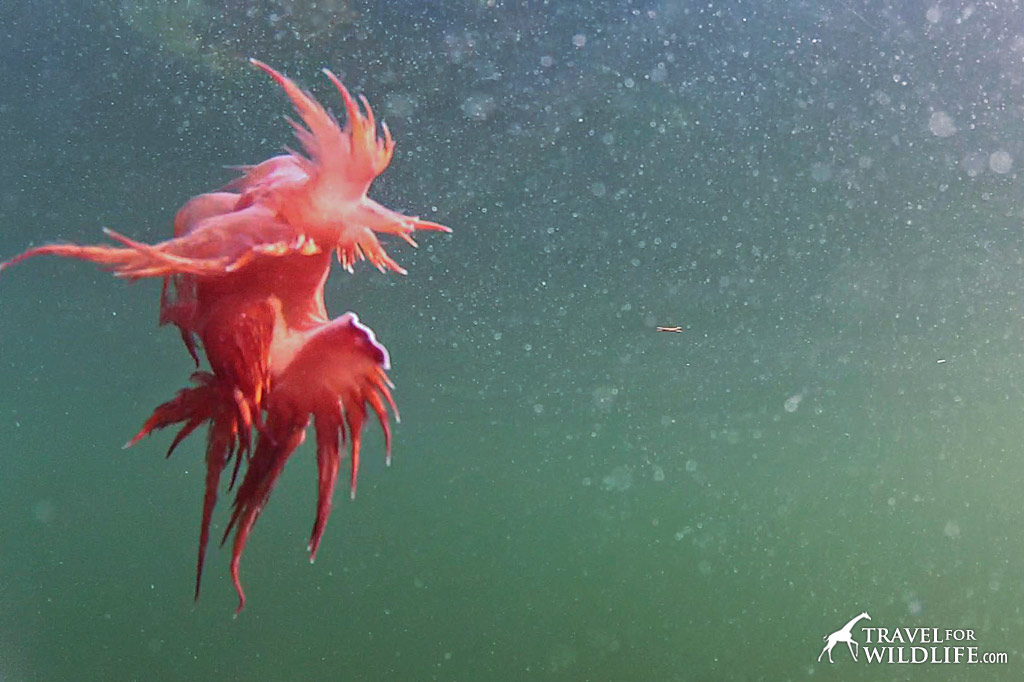 A nudibranch photographed from the boat with a gopro on a pole.

We were immediately captivated by the staggering beauty and diversity. We wanted to dive in and see all these creatures close up, but there was a slight problem. It was October and the water was extremely cold in British Columbia, and we didn’t have any dry suits or even a wet suit. So we decided to do a few experiments with our GoPro. We wanted to capture the life of sea stars and nudibranchs, and how they might interact with other species. But unfortunately they are both incredibly slow moving creatures. So Hal came up with the idea of shooting an underwater time lapse of starfish.

To create our time lapse we were taken to a spot where the concentration of sea stars was higher than at The Aquarium. Fraser took us to Hopetown Pass, a tiny little channel where the water transformed from a dark greenish-blue to bright pink due to the number of sea stars crawling along the bottom. We could identify Sunflower sea stars and Ochre sea stars. 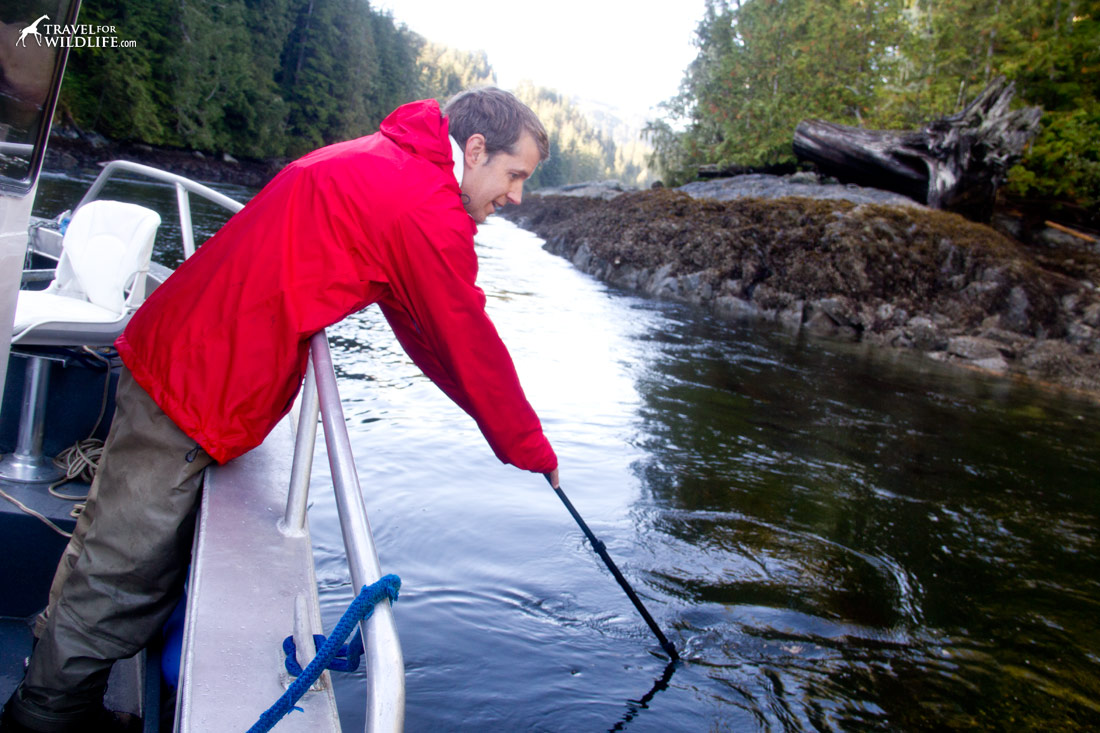 Testing the waters with our GoPro attached to a pole

This was the perfect spot for shooting our underwater time lapse of starfish.

The results were so much fun to watch! Absolutely mesmerizing.

Not only did the underwater time lapse show amazing starfish activity, but if you look closely you’ll a bunch of other animals moving around. Little fish, hermit crabs, clams, and if you really pay attention you can even see a sea urchin walking around with a shell as a hat! Fascinating.

How Did We Shoot Our Underwater Time Lapse of a Group of Starfish?

Here is Hal’s account of how he managed the shoot the underwater starfish time lapse video.

I shot this sequence with our older GoPro HD Hero 2. Back then GoPro’s didn’t come with waterproof housings that would focus correctly underwater, so I was using a third party flat port housing by Eye Of Mine. As GoPros have a built in intervalometer, I set the camera to shoot one image every 30 seconds. The final challenge was anchoring the camera in a stable position pointing at a frame full of starfish.

After scavenging around the grounds of Nimmo Bay, I found and old homemade mooring anchor made from a coffee can filled with concrete and with an iron ring embedded vertically in the top. The ring gave me a perfect spot to fasten the GoPro using a GoPro handlebar/post mount.

My final step was to fasten a floating nylon rope to the short length of chain attached to the top of the ring which would allow me to lower the whole rig carefully down into the water from the boat. (Tip: clamp the camera to the side of the ring using a right angle turn so that the rope hanging from the top of the ring won’t knock the camera out of alignment as you lower it.) If I were going to attempt to recreate this setup at home I would probably buy the largest galvanized eyelet I could find at the hardware store and embed that into the top of a big can filled with concrete. I used a floating line so that it would be easier to retrieve it upon our return. Another option would be tie an empty milk jug to the end of the line to use as a float for retrieving. 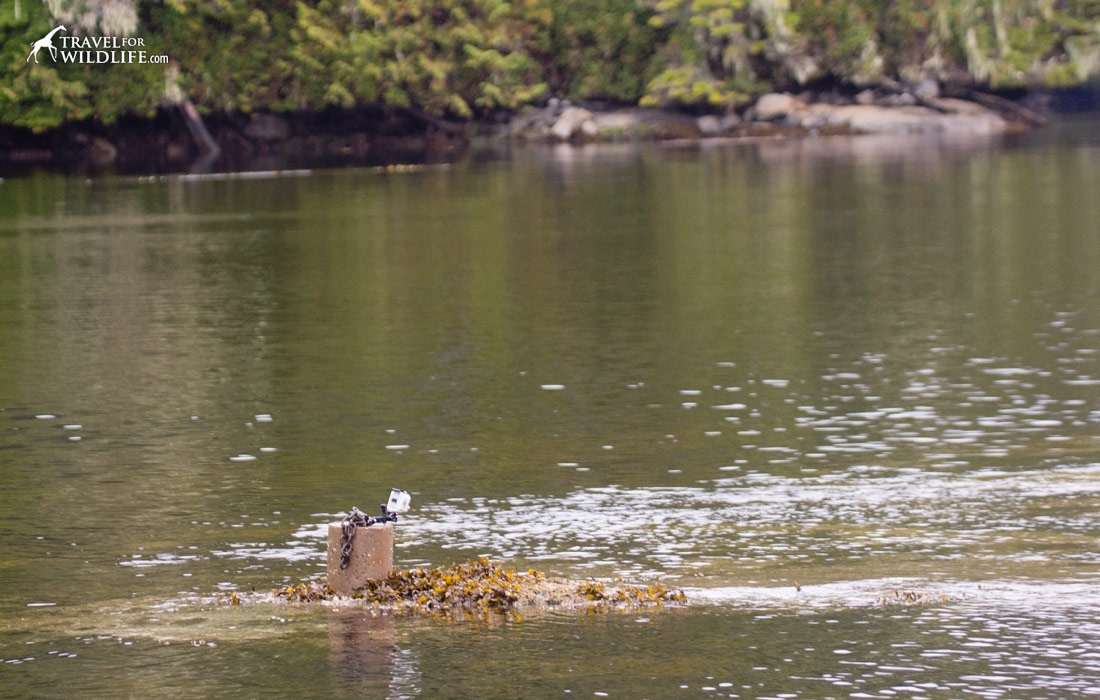 Our camera clamped to a concrete mooring block, placed on a favorite harbor seal rock haul-out.

To make sure I got plenty of images I used two fully charged batteries (using the additional GoPro battery backpack).  We found a great spot with tons of starfish and as Fraser carefully maneuvered us, I started the camera shooting and then lowered the contraption into position.

We returned about six hours later and after reviewing the images on my computer I calculated that it had been shooting for about three and a half hours before the batteries died. The extreme cold of the water probably reduced my battery life, but even so that gave me about 400 images to work with.

Back in our cozy cabin at Nimmo Bay I did some bulk post processing of the photos in Photoshop to correct color and exposure. Then I compiled the still images into a video using QuickTime Player 7 using 30 frames per second as a frame rate. For those of you wondering why I would use an old version of QuickTime, it’s because they removed the “open image sequence” command after that version! But if you can use QuickTime 7 it’s a super easy way to compile stills to video and to test out different frame rates to see what looks best.

After this successful first experiment I tried a few other underwater time lapses and captured some more amazing sights, like the feeding behavior of the rare and amazing hooded nudibranch!

Have you ever tried an underwater wildlife time lapse? Let us know in the comments below!