How Bison Help Other Wildlife in the Winter

There is always something to learn when you are outside watching wildlife. No two days are the same.

For example, this year we left Yellowstone with a deep appreciation and respect for the bison. They are incredible survival machines. Their coats are so thick that the snow on their back doesn’t melt. This is how they can survive those extreme winter temperatures. When it is really cold, or in a snowstorm, they either feed or sit still and wait it out. Business as usual for bison in the winter. It might not be comfortable, but they survive. 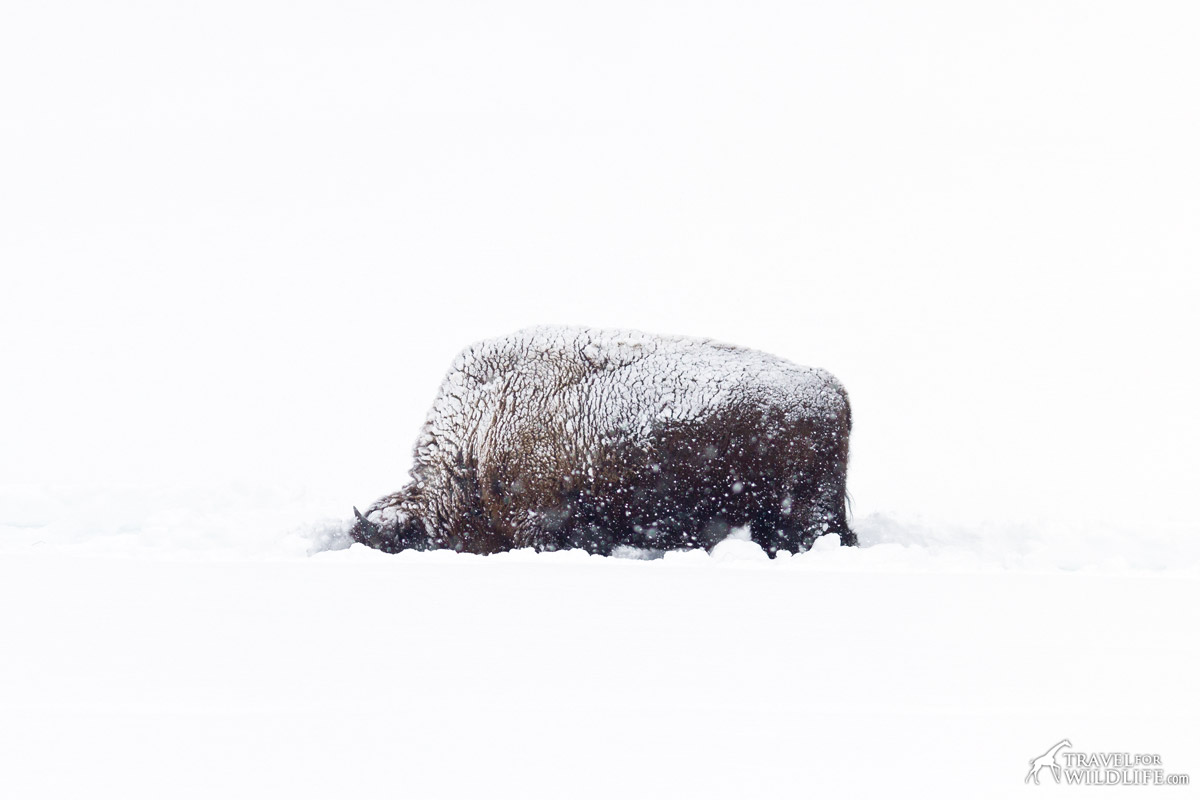 Bison feeding in a snowstorm

But here’s one thing we learned from the bison: they are the official snow plows in the park. And everyone benefits.

When we were visiting Yellowstone this January we managed to capture this “body plowing” moment when a group of bison decided to join the road just in front of us, just outside of Cooke City. We’d just had a huge snowstorm and the snow was as high as the bison’s backs.
This video shows how they had to crash through the snow to get to a plowed road.

But how does other wildlife benefit from their strength?

One day, after a huge storm, we parked our car on one of many pull-outs found in the park. In front of us there was a creek, and a moose and her calf walking in it. The reason they had to walk in it was that it had snowed so much in the past 24 hours that it was too difficult to walk through the deep snow. So they decided to walk in the creek instead. As you see in the photo, the snow had almost completely closed up the creek. But they managed. Slowly.

Then another car stopped right in front of them to take a photo. Note that if you are in Yellowstone, you are not allowed to stop in the middle of the road, only in the pull outs. “Give space to wildlife” is one of the first rules for park visitors. This was definitely too close for the mother moose and her calf, and as soon as they saw the driver get out to take a photo, mom moose decided to leave the area. She took a turn and left the creek, walking through the deep snow just to avoid this person. And it didn’t look easy, especially for the baby. They were not happy. They slowly made their way into the forest and disappeared into the trees. So much energy wasted.

Here’s how it happened. 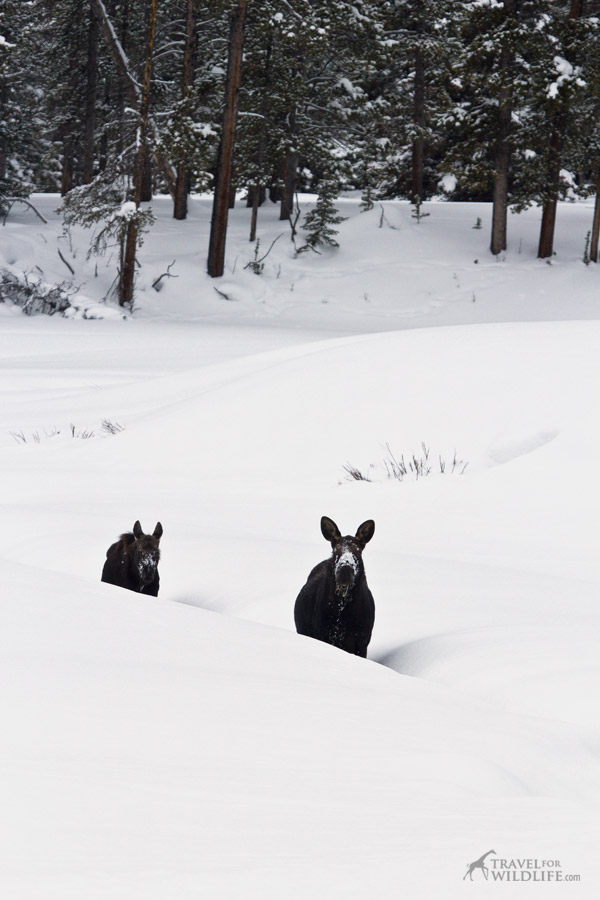 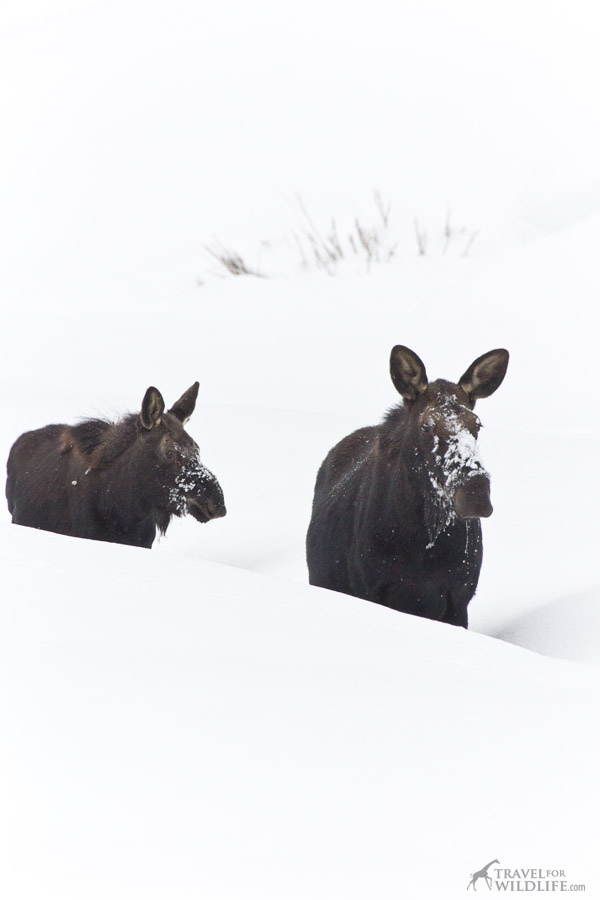 Mom moose takes notice of the car (not impressed) 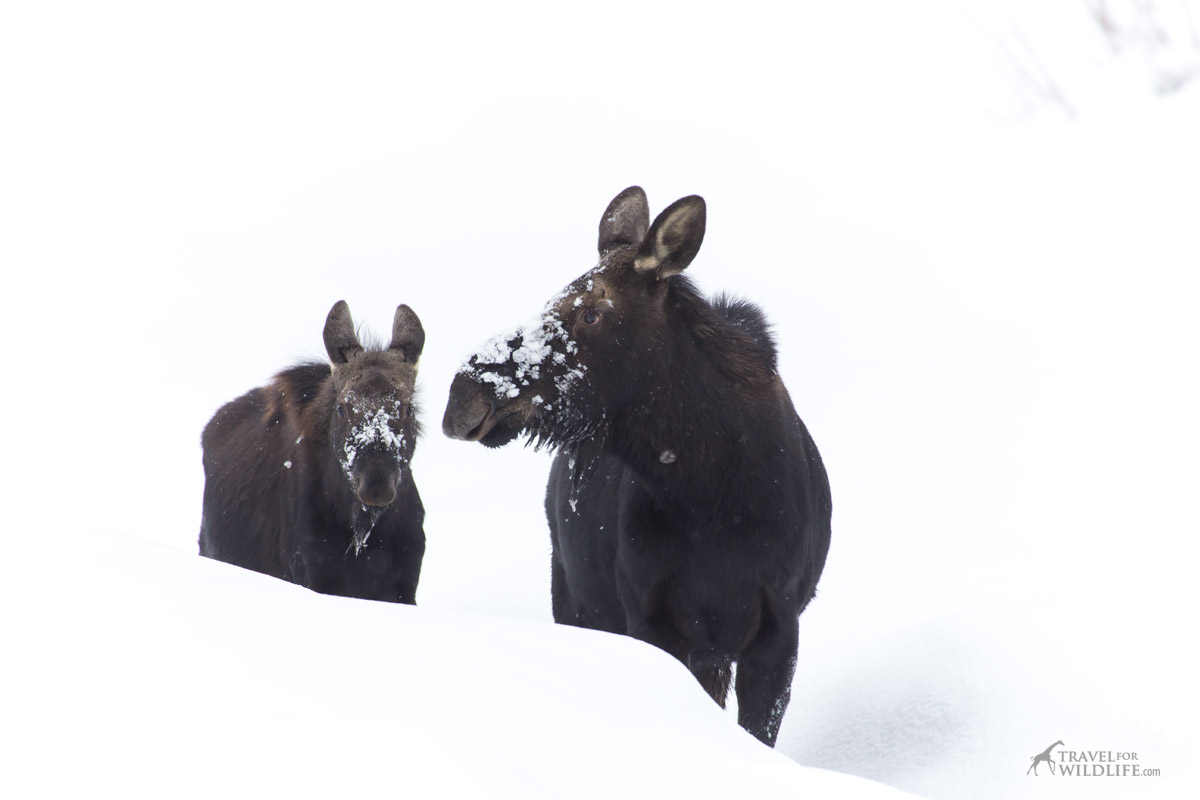 Mom looks for an escape route 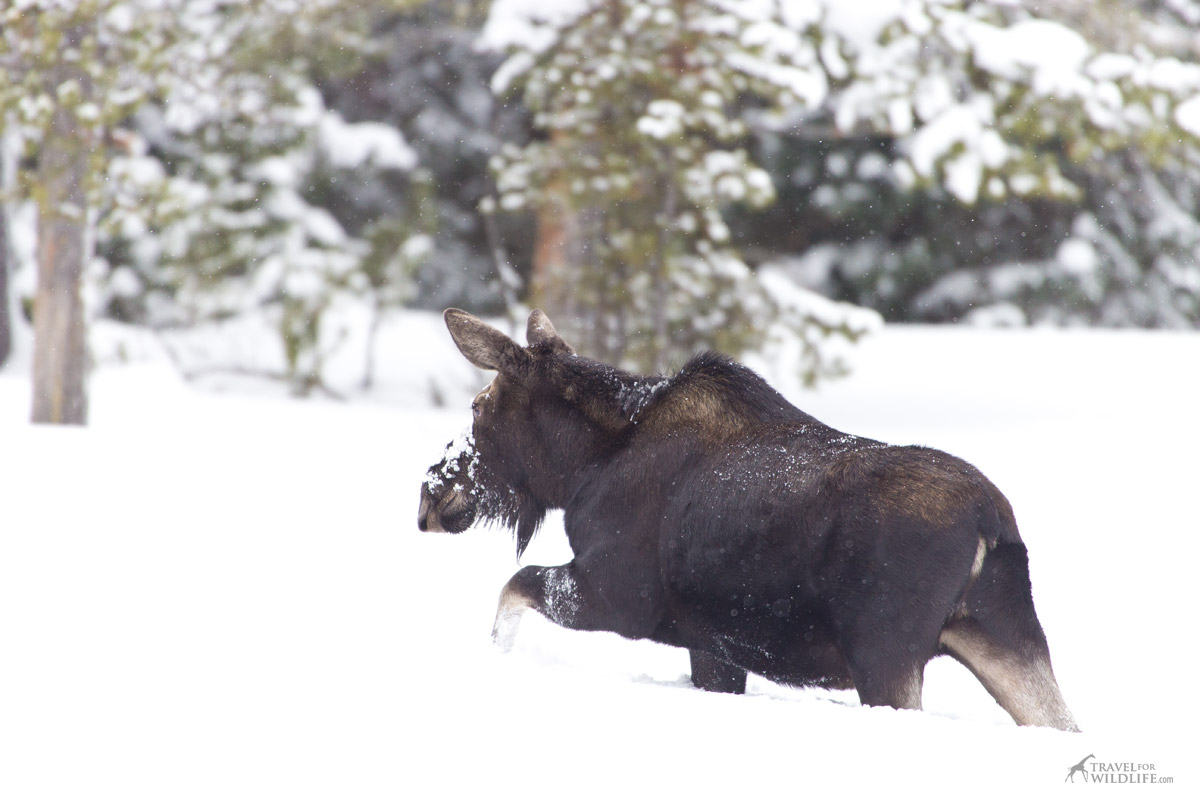 Walking through deep snow and heading for the woods 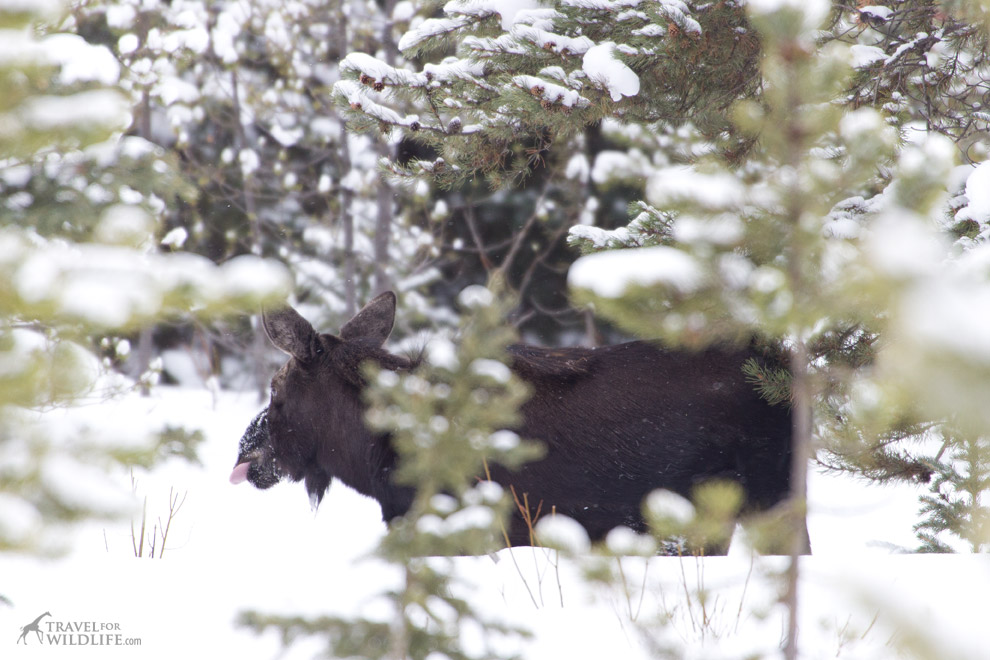 Safe in the woods. I like to believe she is sticking her tongue out at that tourist.

It was a couple of days later when in this very same spot we saw two bison, also walking in that same creek! So, it appears that everyone prefers to walk in creeks when the snow is that deep. Who wouldn’t, right? Bison are wider than moose, and didn’t quite fit in the tight snow banks bordering the creek. So they started to widen the snow passage with their powerful bodies. 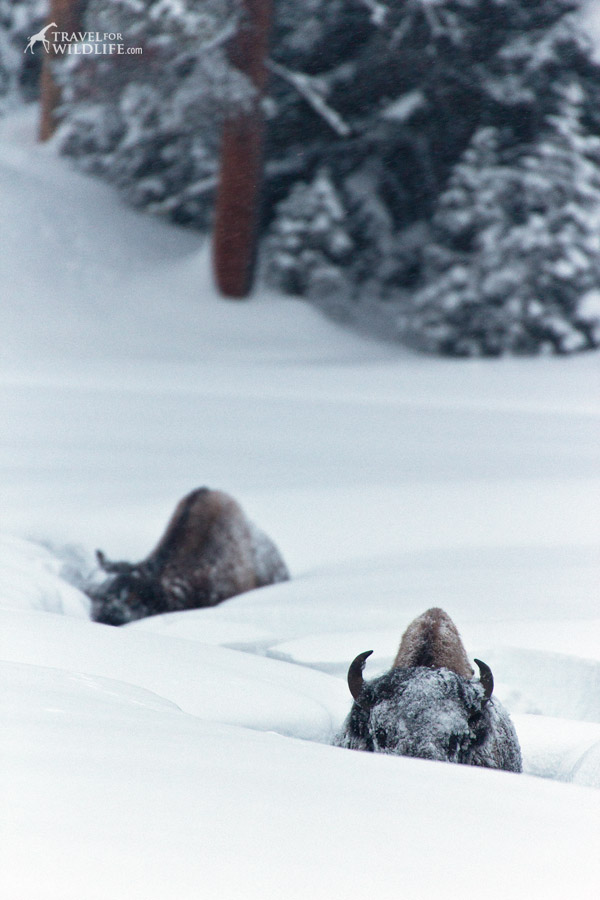 The snow was so high we could hardly see the bison 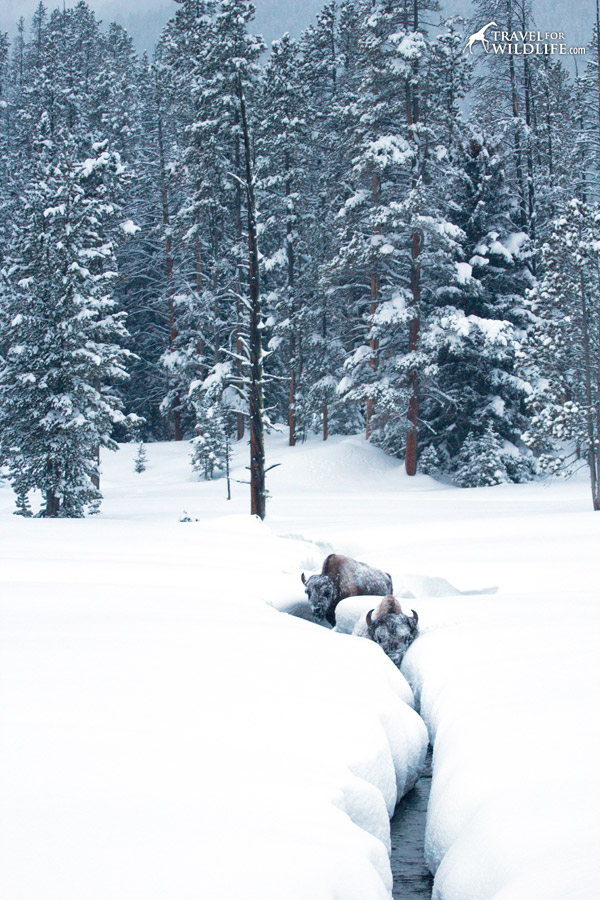 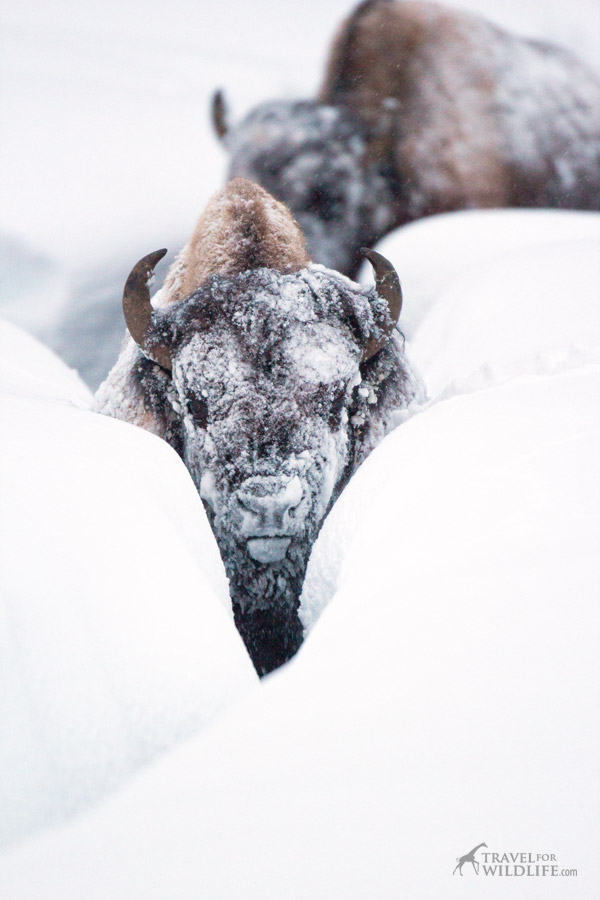 The bison walking down the snowy creek

Having learned from the moose-photographer incident, we decided to leave them alone. A few days later, this is how the creek looked, after being plowed by the bison. I bet all the wildlife love bison here. Thanks BISON! 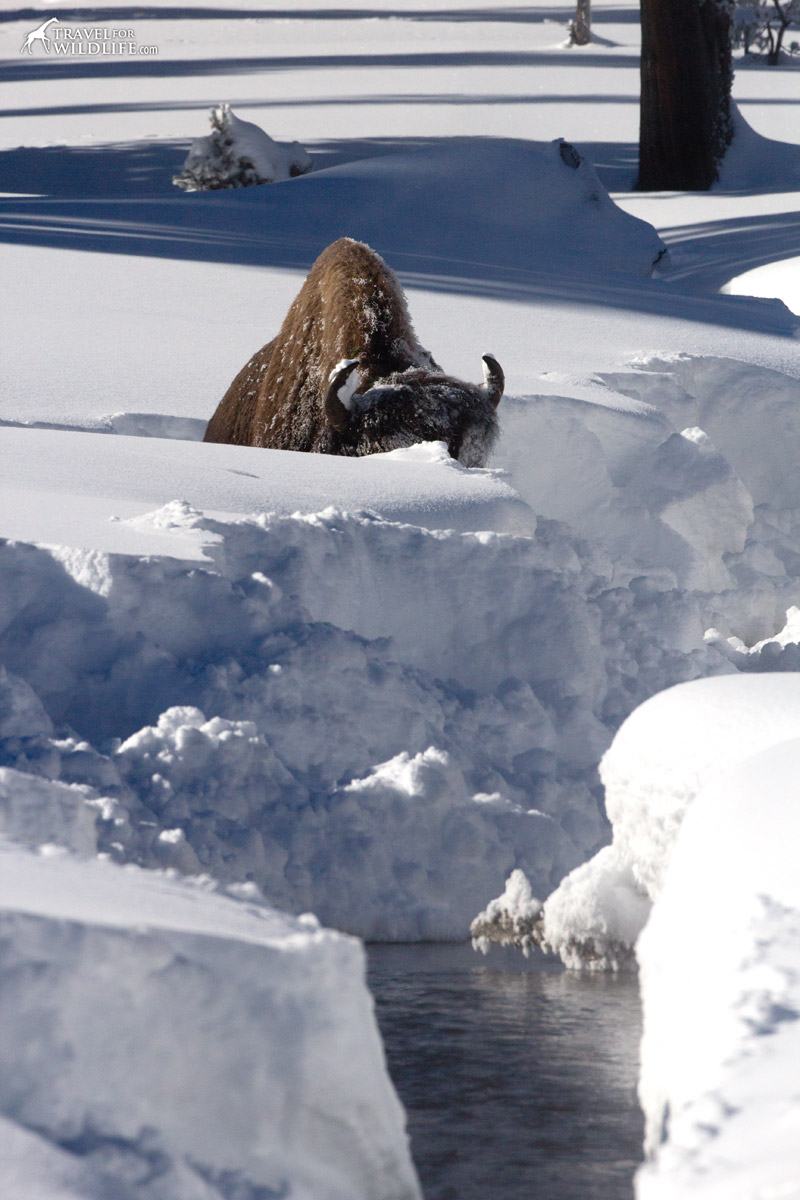 This is how the creek looked a couple of days later 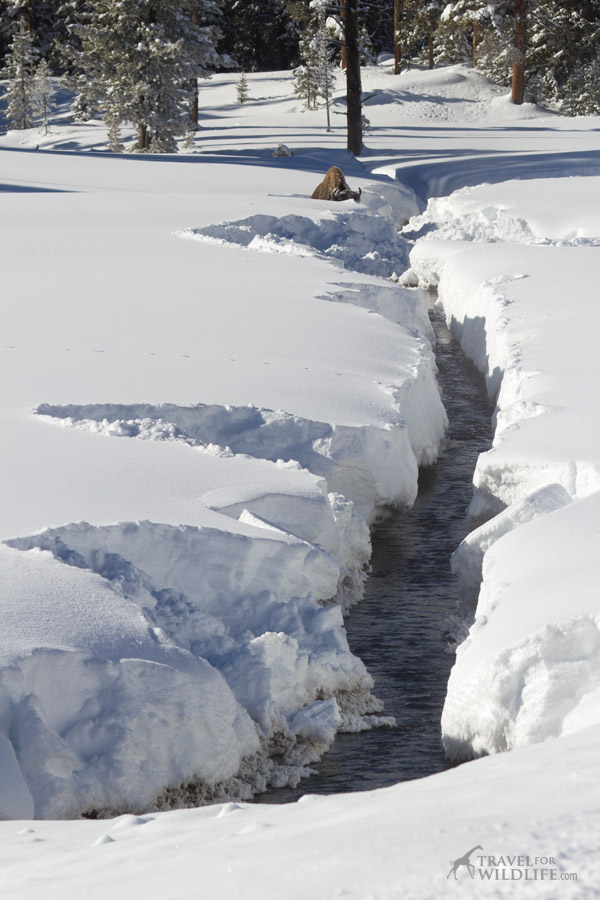 The creek is wide open after bison have plowed it

There are a few things we can learn from these observations.

Want to witness cool behaviors like this one? Then you should visit Yellowstone in the winter. Don’t know where to start? Read our Guide to Yellowstone in the Winter and don’t forget to be prepared for those temperatures and wear proper winter gear. These are our recommendations for winter travel gear for Yellowstone.