Imagine waking up one night and finding one of the world’s most dangerous scorpions strolling by your tent door, the fattail scorpion. Shivers!

This actually did happen to us one night in the Kgalagadi Transfrontier Park of South Africa. It was fascinating and kind of scary.

The Fattail scorpion (also known as the fat-tailed scorpion or thick-tailed scorpion) has another nickname: “man killer”. This should give you an idea of just how dangerous these guys are, so stay away! This particular species is known as the Transvaal Thick-tailed Scorpion or the South African Fat tail Scorpion (Parabuthus transvaalicus) and it is one of the largest members of the Buthid family. A full grown fattail scorpion can measure up to 4 inches long.

We believe the fattail scorpions are some of the most interesting creatures on Earth, and these scorpion facts are why: 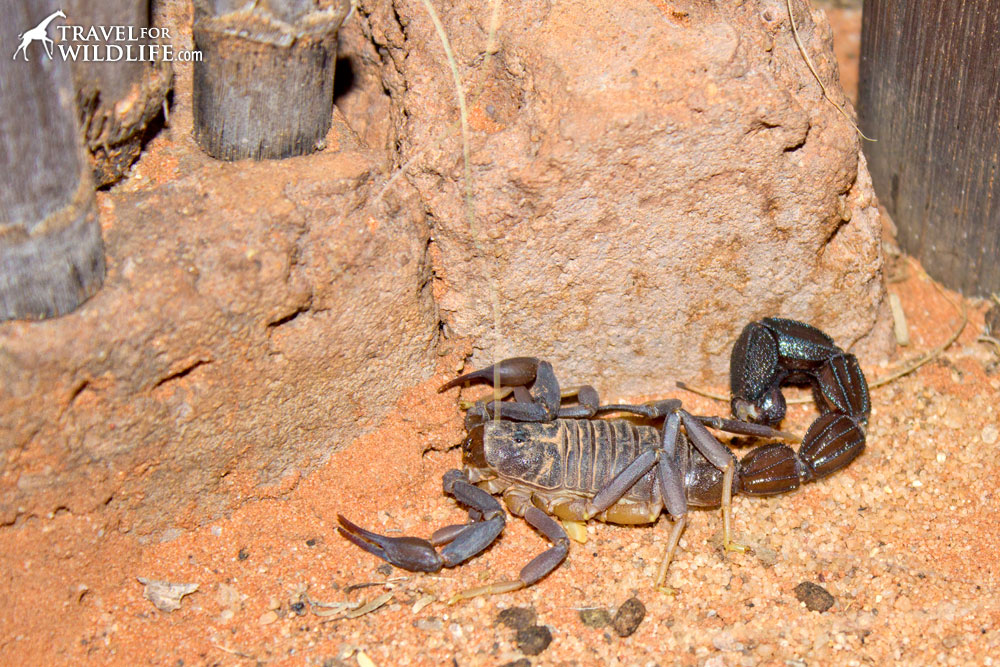 We found this Fattail Scorpion huddling right next to the entrance to our tent!

Scorpions are one of the few animals that when a black light shines on them, they shine back!

To see them you’ll need a UV Flashlight

. They are really cheap, and it’s a great wildlife watching gadget.

Why do scorpions glow under UV light? Well, nobody knows why. But scientists have found that the fluorescence is caused by the accumulation of a chemical called beta-carboline in their exoskeleton, which glows under UV.

We got our UV flashlight just after our last visit to the Kalahari visit (where a big number of scorpions are found) so we haven’t found any with it yet. But, much to our surprise we found another animal that glows under black light. The millipede!

2) Tired of your boyfriend? Eat him!

That’s right. During courtship, if the female fattail scorpion thinks the male is not making an effort she’ll ask him to leave. If he doesn’t leave, she eats him!

This cannibalistic behavior goes to an extreme when dealing with offspring. After baby scorpions are born (up to 50), they climb up onto their mother’s back. They stay there until their first molting period. If they don’t leave when they should, she may eat them as well. That’s one way to make sure kids don’t overstay their welcome, right? 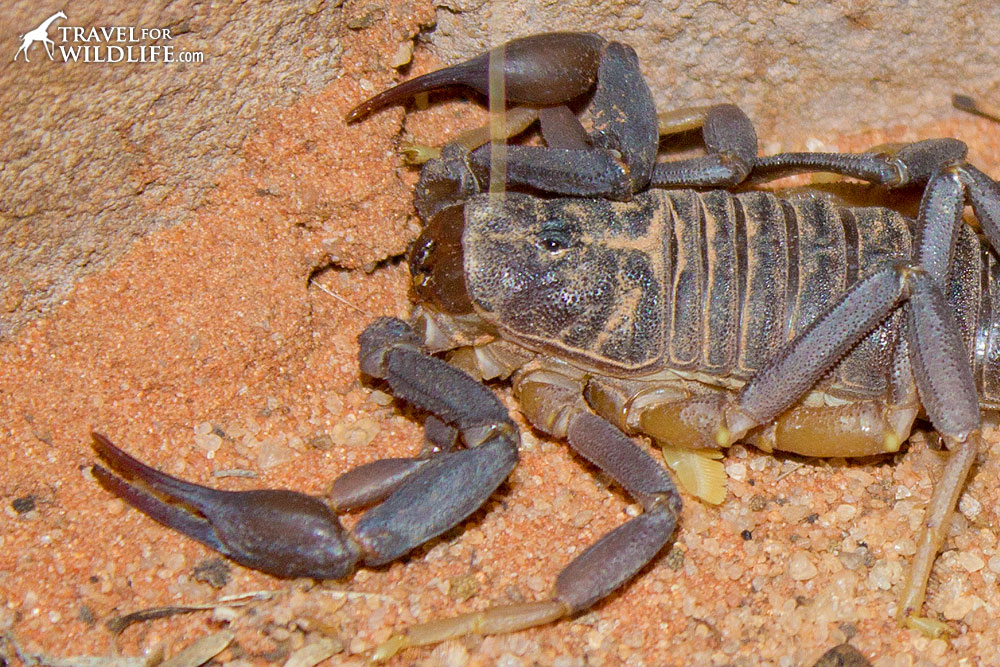 3) The Fattail Scorpion has Two Venoms, But only One Tail

The species Parabuthus transvaalicus is considered “medically important” because of the unusual toxins it produces. One toxin that can be isolated from the Transvaal Thick-tailed Scorpion is called “Kurtoxin”.  Searching around the internet I see several medical supply companies that sell this compound for medical research, and apparently this is the only species in the world that produces it. The fattail scorpion toxin affects the gating of voltage-gated calcium channels and sodium channels, whatever the heck that means.

Another interesting study notes that this scorpion actually produces two different venoms! The “prevenom” requires less resources to produce and is handy for quick encounters such as deterring a predator or quickly immobilizing small prey. The second dose (the venom) is much more toxic and consumes far more of the scorpion’s resources to produce, making it biologically “more expensive”.  This way, the scorpion can conserve the hard stuff for more serious encounters. Pretty cool, right? 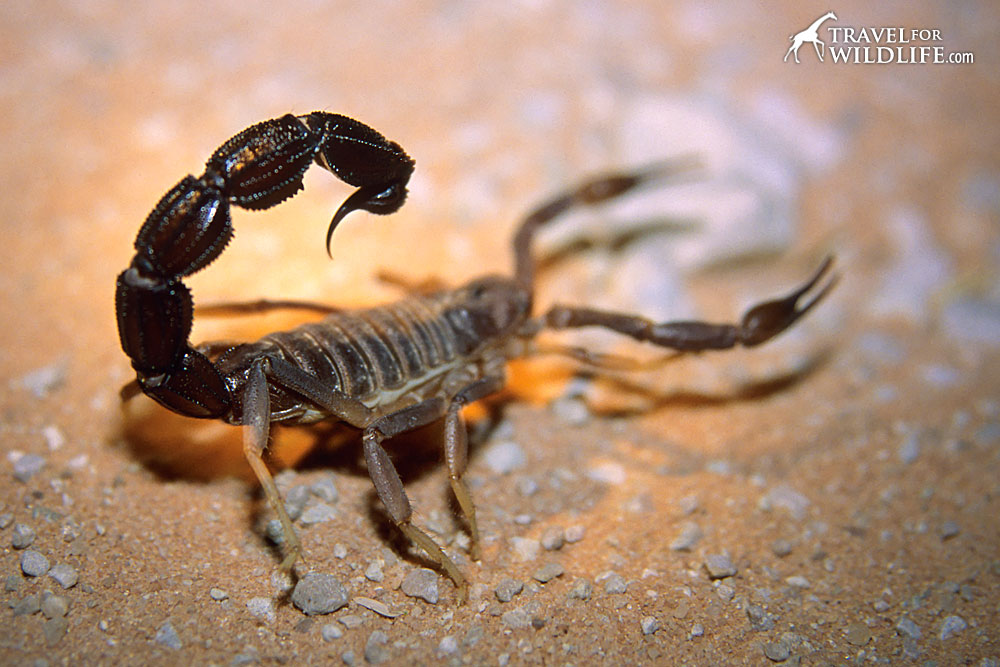 4) More Than a Stinger

It’s a general rule of thumb that scorpions with small pincers and a thick tail are more dangerous than those with the reverse. That’s because those with strong venom (in their fat tail) are less reliant on big strong pincers to subdue their prey. But the Transvaal Fat-tailed Scorpion can do a few special things with its fat tail that most other scorpions can’t. For one, it can actually squirt its venom at an attacker up to 3 meters away! (Only two other Buthid species are thought to be able to do the same.) And secondly, this scorpion can produce a sound by rubbing its stinger against its rough back! This is known as “stridulation” and is usually used as a warning sound, kind of like the rattle of a rattlesnake’s tail. Creepy! 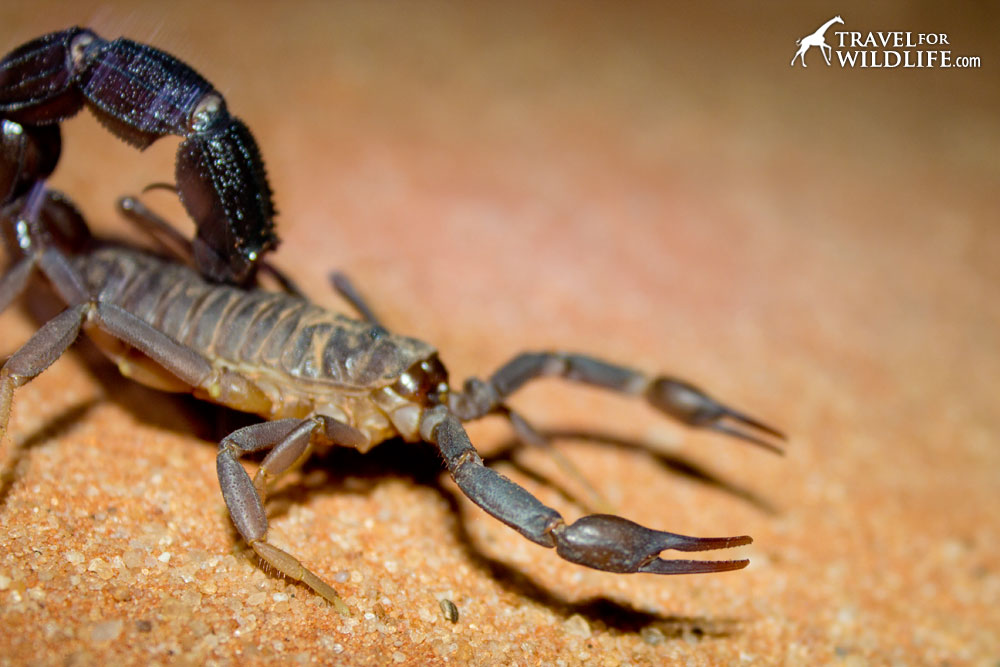 Small pinchers and a fat tail? Warning! Danger! Do not touch!

5) How to Avoid Getting Stung by a Fattail Scorpion

There are some easy actions you can take to not get stung by a fattail scorpion, apart from the obvious do not attempt to touch a scorpion. Scorpions love windy nights, so be extra careful during those nights: