Are Sharks Mammals or Fish? (And Other Shark Facts)

A lot of people find themselves asking the question are sharks mammals? Sharks look a lot like dolphins, and dolphins are mammals! Does this mean that sharks are also mammals? Or are they fish?

Lets take a closer look at the differences between fish and mammals, and how you can tell if a shark is a mammal or a fish. You may learn a couple of shark facts along the way! 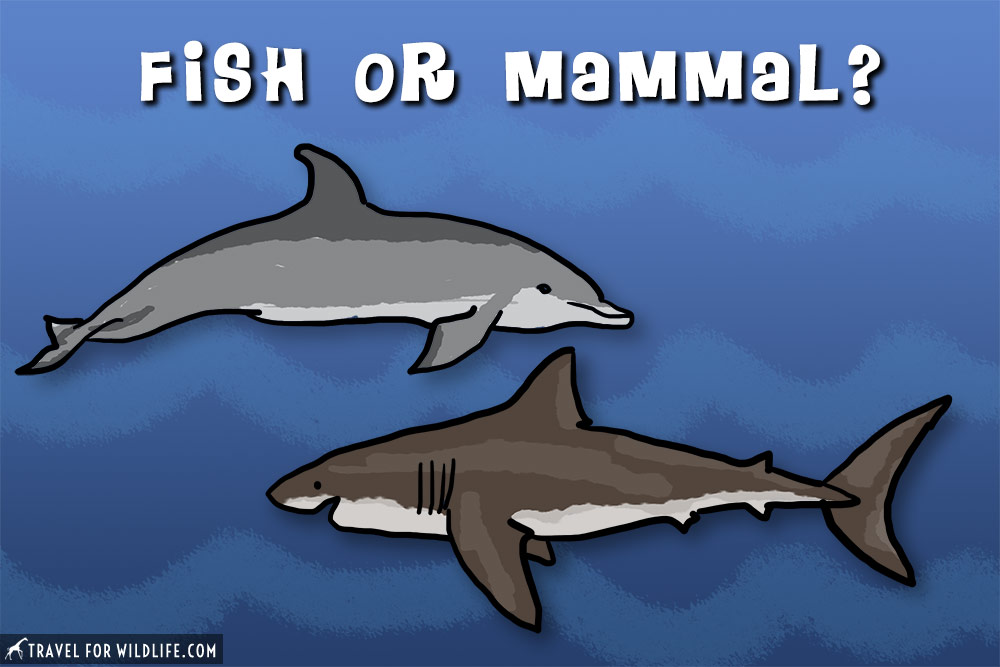 Are sharks mammals? Test your knowledge!

First of All, Why Does It Have To Be a Fish or a Mammal?

Sharks have a backbone so that means they must be in one of these five categories. So are sharks mammals, birds, reptiles, amphibians, or fish?

The Most Obvious Difference Between a Fish and a Mammal is How They Breathe. So, Is a shark a mammal?

There’s one requirement to be a mammal that is so obvious it doesn’t even get included in the definition of mammal. All mammals breathe air through lungs. On the other hand, all fish get oxygen from the water through gills. How do sharks breathe? Like other fish, sharks breathe with gills! So if you ask your self if a shark is a mammal, now you know!

Cetaceans (dolphins and whales) breathe air with lungs through a blow-hole on the top of their head. They must return to the surface of the water every time they want to take a breath. Sharks, however, take in water through their mouths and pass it out through their gills to extract oxygen. It is commonly believed that sharks have to keep swimming to breathe or else they’ll drown, but this isn’t true. Nearly all sharks can rest on the bottom and simply ‘gulp’ water through their mouth and out their gills. Others have spiracles, a small hole behind the eye, which they can use to draw in water and breathe. Only a few species are “obligate ram ventilators” meaning they have to have to ram water into their open mouths by swimming in order to breathe. These include the Whale Shark and the White Shark.

If you’re looking at a marine animal and trying to decide if its a fish or a mammal, here’s one very simple test. Which way is its tail oriented? If the tail is horizontal, then it is a mammal. This is true for all Cetaceans (whales & dolphins) and Sirenians (manatees & dugongs). On a cetacean this is called a fluke. If the tail is vertical, then it is a fish. This is true for all sharks. On fish this is called a caudal fin. Here is a diagram to show a few of the quick and easy ways to tell the difference between a fish (like a shark) and a marine mammal (like a dolphin). 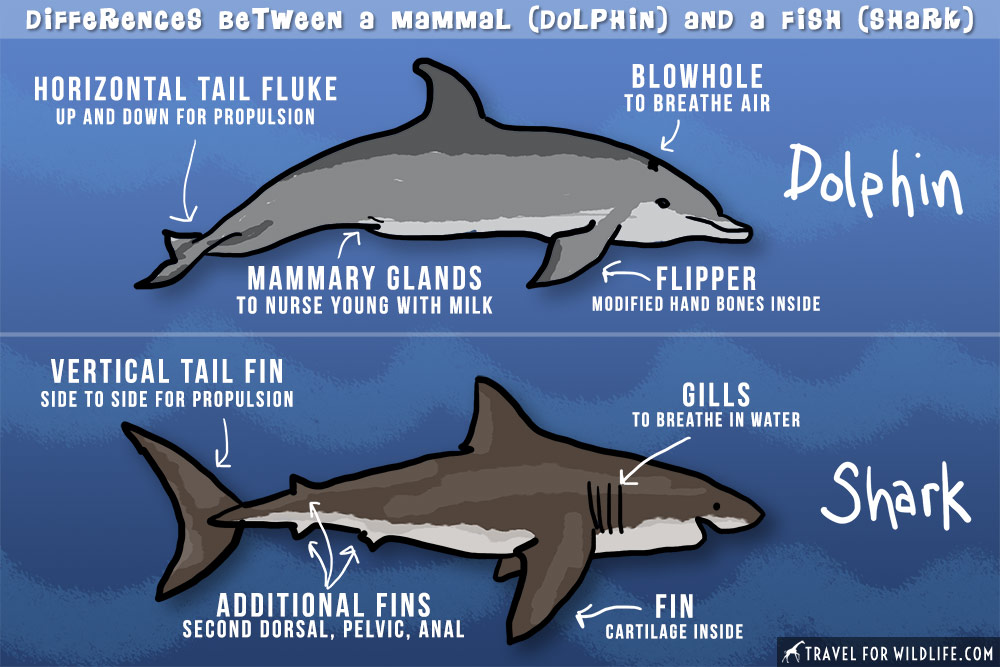 Differences between a dolphin and a shark (mammal and a fish)

Do sharks have all of these traits? Let’s check them out one by one because there are a few interesting exceptions.

Do Sharks Have Hair?

No, sharks clearly don’t have hair. But they do have very interesting skin. Sharks are covered with tiny tooth-like scales called denticles. These sharp little teeth point toward the tail and help streamline the animal in the water. This gives them very rough skin if you were to pet them in the wrong direction! (Please don’t pet a shark.) Hey wait, do dolphins have hair? Actually all cetaceans (whales and dolphins) have some kind of hair which is usually lost before or immediately after birth. In the case of dolphins, they have a few whisker-like hairs that protrude from the sides of their rostrum (their ‘snout’). These hairs fall off shortly after birth but the follicles are still visible. 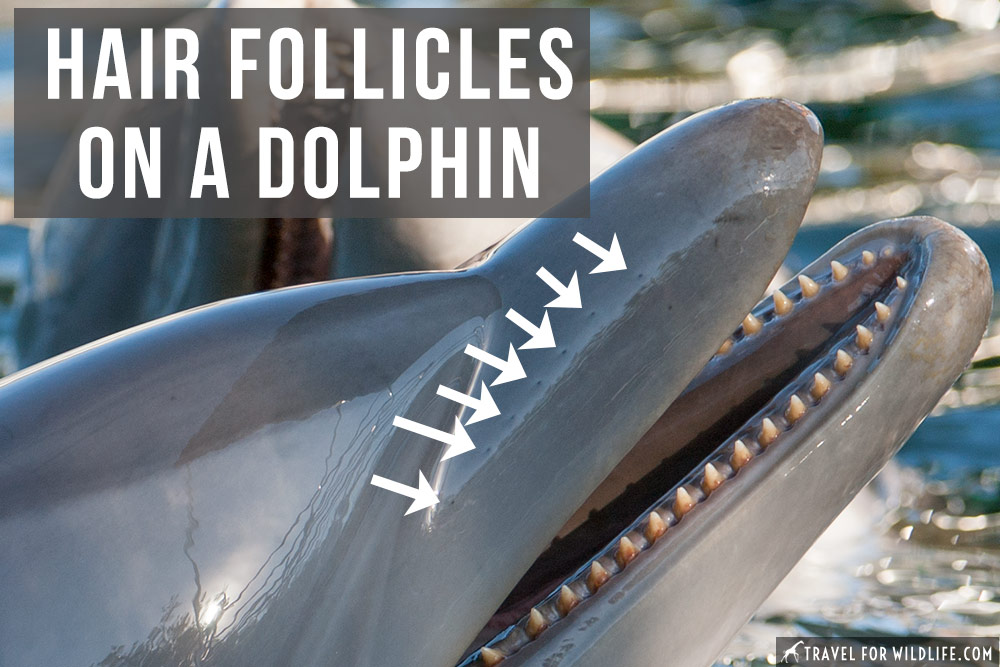 Do dolphins have hair! Yes! At least when they’re born. After that, they fall out you can only see the hair follicles.

Some whales, like the Humpback, retain their whisker-like hairs their whole lives in large bumpy follicles called tubercles.

No, sharks don’t have any ear bones. That’s because sharks don’t technically have any bones at all! Their skeletons are made entirely of cartilage. This is true for all the cartilaginous fishes including sharks, rays, skates, and sawfish. But, do sharks have ears? Yes they do! In fact, sharks seem to have very good hearing. Shark ears are entirely internal except for a tiny hole in the skin to hear through.

No, sharks are cold-blooded (ectothermic), with one exception. The Lamnidae family, also known as Mackerel Sharks, do possess some warm-blooded (endothermic) capabilities. There are five shark species in this family: Great White,  Shortfin Mako, Longfin Mako, Salmon Shark, and Porbeagle. These “warm blooded sharks”  have the unusual ability to raise their body temperature above the temperature of the surrounding water. They use a special web of blood vessels to capture heat from their muscles. One study showed that this red muscle endothermy allows these sharks to swim faster and farther than other sharks! 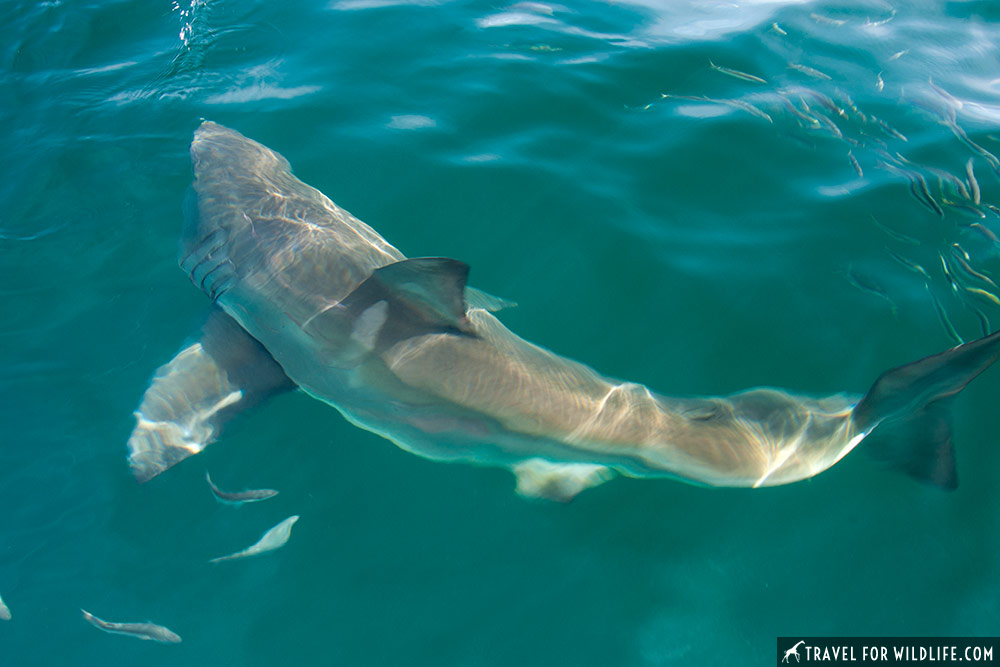 There are a few ‘warm blooded sharks’ like the White Shark

Do Sharks Nurse Their Young?

No, sharks cannot nurse their young because they have no mammary glands to produce milk! As you may have guessed, mammary glands are only possessed by mammals. That means no fish, including sharks, can nurse their young. (No, not even a Nurse Shark!) So do sharks give live birth like mammals or do sharks lay eggs? Trick question. Sharks do both! Of the more than 500 species of sharks, some are oviparous (lay eggs), some are viviparous (give live birth to pups that were nourished by a placenta), and some are ovoviviparous (hatch the eggs internally and then give birth later). Whether they lay eggs or give live birth, sharks don’t do any parenting to their offspring. You’re on your own kid!

Do Sharks Have a Neocortex?

Nope, sharks do not have a neocortex in their brain. The neocortex appears to be a fairly recent development in evolutionary terms and is found only in mammals. However, compared to most fish, sharks do have a relatively large brain to body mass ratio. In mammals, the neocortex seems to be involved in “higher” functions such as sensory perception, motor commands, conscious thought, spatial reasoning, conscious thought, and language.

So, Are Dolphins Mammals?

Yes, dolphins are mammals. And there are several easy ways to tell that dolphins are mammals. Dolphins breathe air through a blow hole on the top of their head and use lungs (just like you and me) to extract oxygen from the air. Breathing air doesn’t necessarily make you a mammal (for example, reptiles, birds, and most adult-stage amphibians breathe air too) but it does mean you’re definitely not a fish, which use gills to breathe. How about the rest of the requirements?

Are Sharks Mammals? Nope! So Why Do They Look So Similar?

Fish and mammals are quite far apart on the evolutionary family tree so how did they end up looking so similar? Well it turns out that this design (a torpedo with fins for steering and a flat tail for propulsion) is perfect for fast-moving predators that live in water. Over millions of years, several very different groups of animals arrived at the same perfect solution, including fish, mammals and even reptiles. This is a great example of convergent evolution. Sharks evolved from early fish over 400 millions years ago. About 250 million years ago, the first Ichthyosaurs appeared. They were marine reptiles that evolved from land-based reptiles! The same thing happened all over again about 50 million years ago when the first whales appeared. This time it was a group of land-based mammals who developed a marine lifestyle and lost their back legs. Evolution is awesome! 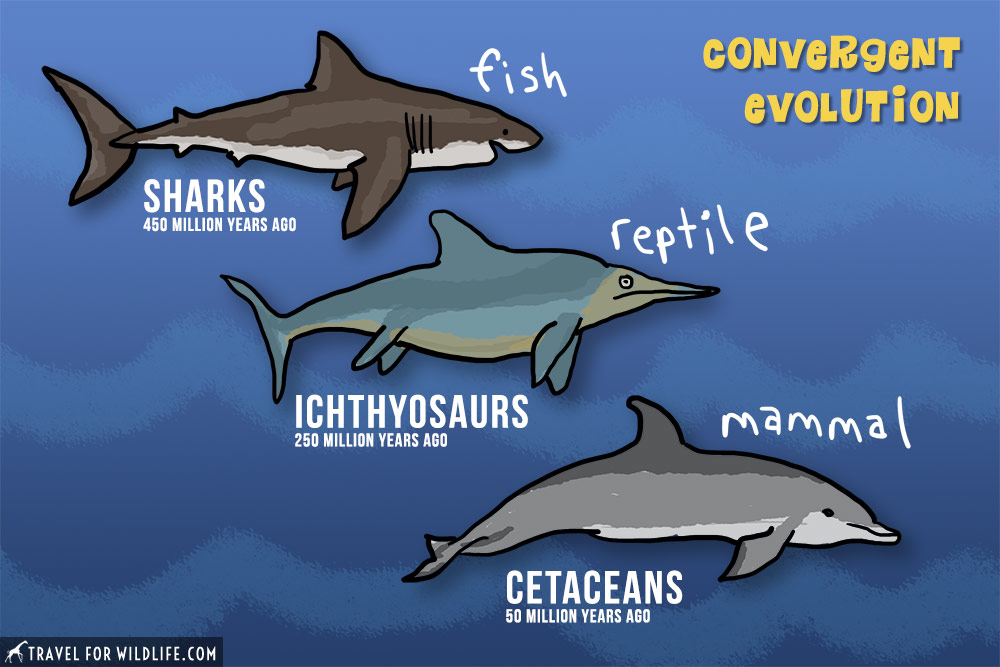 An example of convergent evolution: sharks, ichthyosaurs, and dolphins.

So in conclusion, shark=fish, dolphin=mammal. Got it! Awesome! We hope you learned some cool shark and dolphin facts along the way!

Why Cedar Key is our Favorite Place to Kayak With Dolphins

Rocking Out With Great White Sharks in Australia

Did you enjoy ‘Are Sharks Mammals’? Pin it!

Did you enjoy our article Are Sharks Mammals? Then please pin it on Pinterest with this pin! 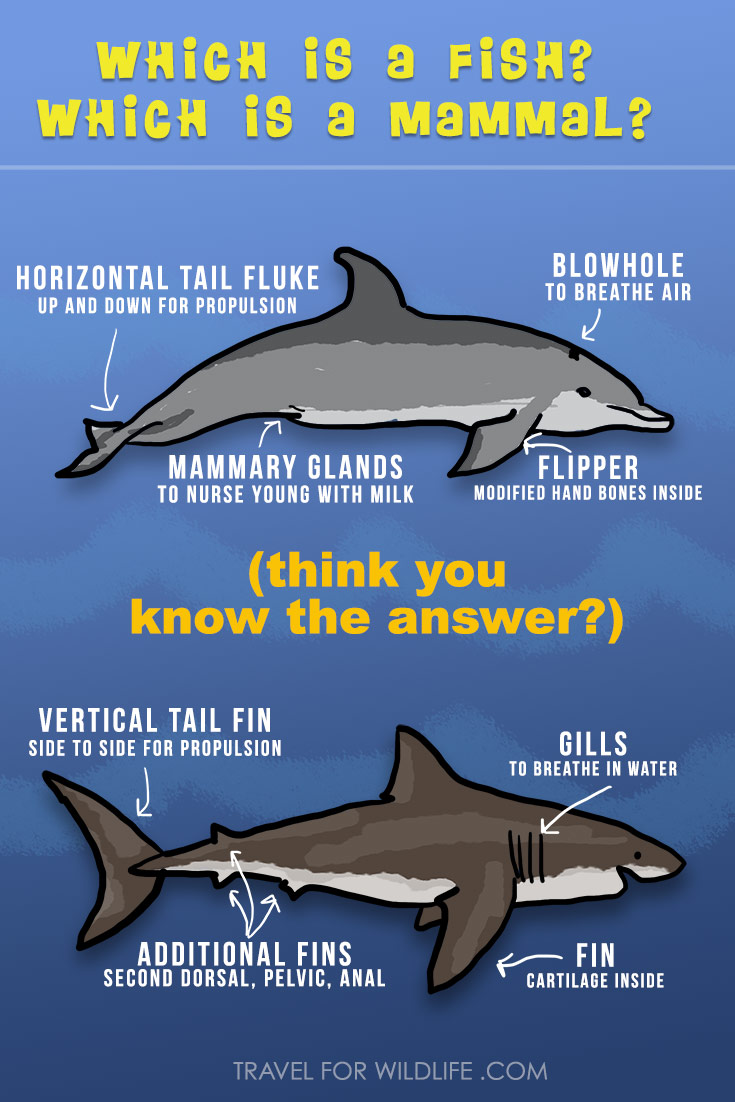 Are sharks mammals? Are dolphins mammals? The answer isn’t as simple as you might have thought!