The Little Five; Who Are Africa’s Small Five Animals?

Everyone has heard about the Big Five, so it was only a matter of time that the Small Five would come out to steal the limelight. While the term ‘Big Five’ was given to the most dangerous African animals during colonialist times, the little five are five small African animals that share part of their name with the Big 5 (lion, elephant, rhino, buffalo, leopard). The Small 5 were named after the Big 5 animals due to a shared behavior or a physical resemblance.

Whenever we travel to Southern Africa we love to find the little creatures because they’re usually a big challenge to spot.

Elephant shrews were given their name due to their flexible snout, resembling the trunk of an elephant. There are 19 species of elephant shrews all over Africa, but these photos and video below feature the Bushveld elephant shrew, as it is the only elephant shrew we’ve been able to document.

Elephant shrews are neither elephants or shrews, but they are closely related to manatees, aardvarks, and elephants. Pretty insane fact when you realize that an elephant shrew can fit in the palm of your hand. 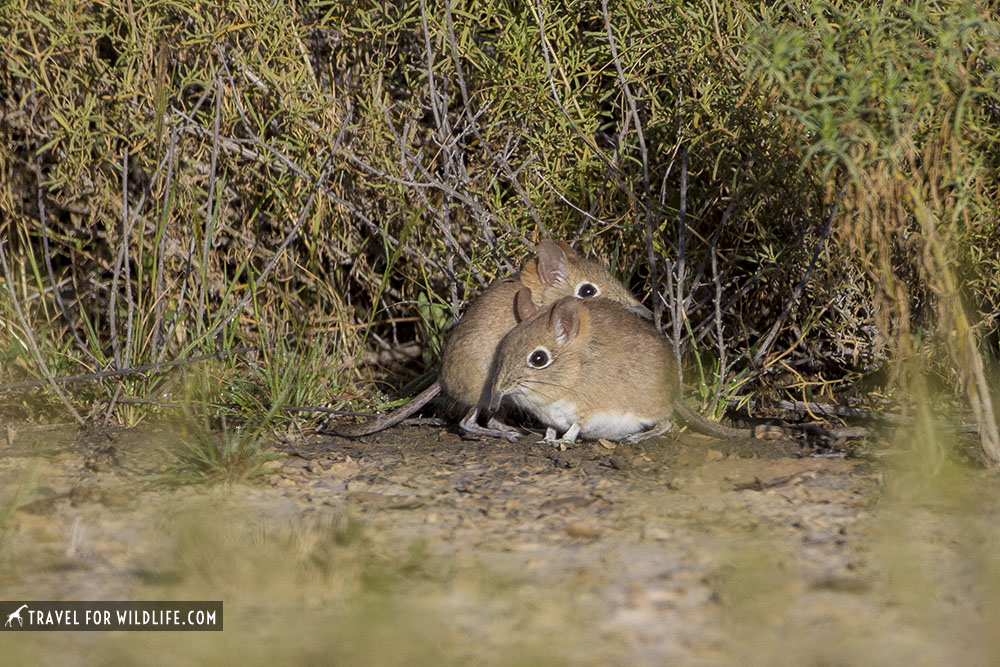 Bushveld Elephant shrews in the Kalahari

They are easily recognizable by their long, flexible snout which is used to find prey  including insects, spiders, and worms. Elephant shrews are monogamous, but they are seldom seen in pairs as they are mainly solitary. They only meet for a short period during mating season, so we were incredibly lucky to see two together! 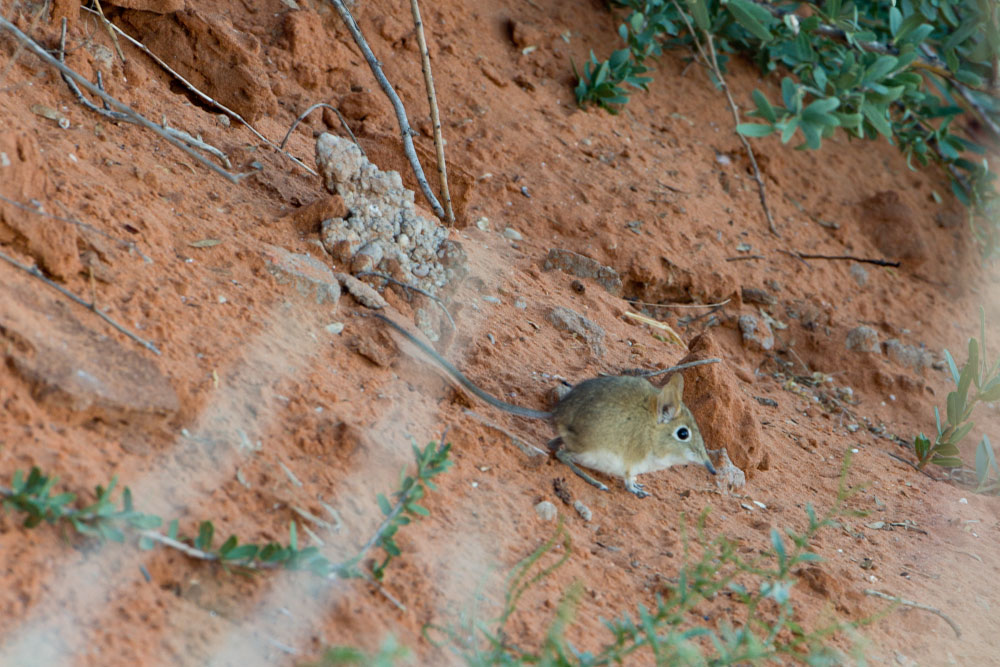 Elephant shrew by our deck in the Kalahari 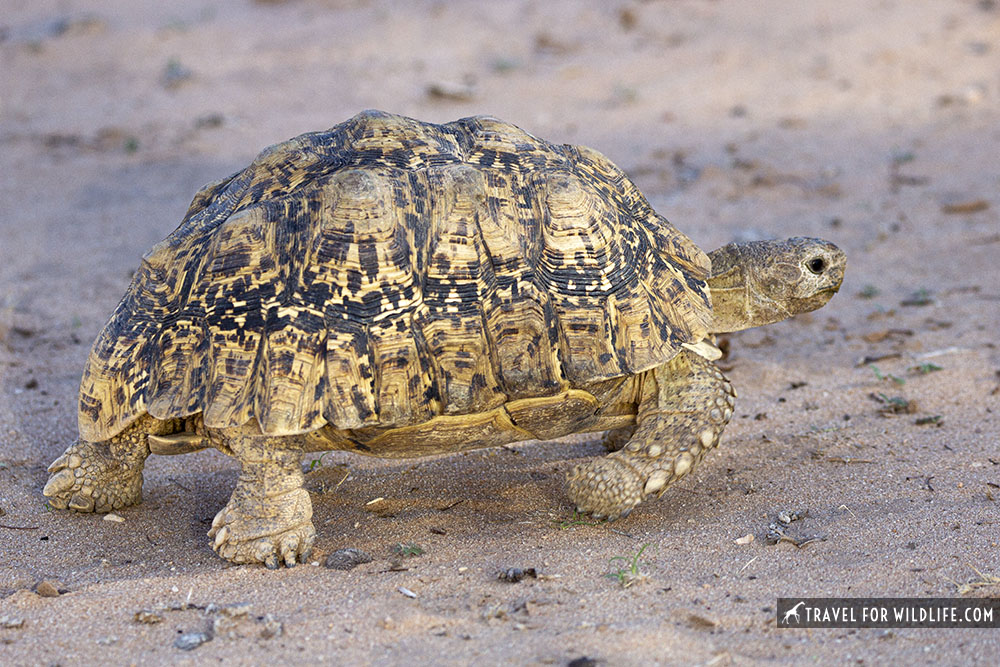 The leopard tortoise is the fourth largest tortoise in the world. You can find leopard tortoises in almost any habitat in Eastern and Southern Africa, but the best time to search for them is just after the rains when they become active. During dry spells, tortoises aestivate in a sheltered place and wait for the rain to return. 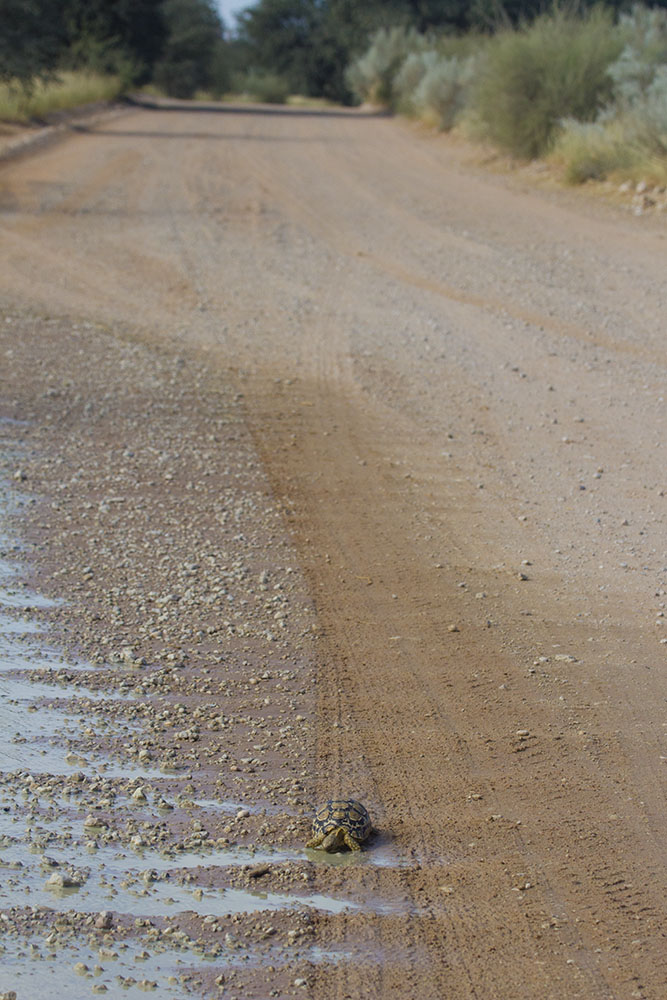 Their domed carapace or shell, is yellow with dark spots (much like a leopard) and becomes darker and blotchier with age. Males are smaller than females (see photo below). Also, female carapaces are rounder and higher domed. 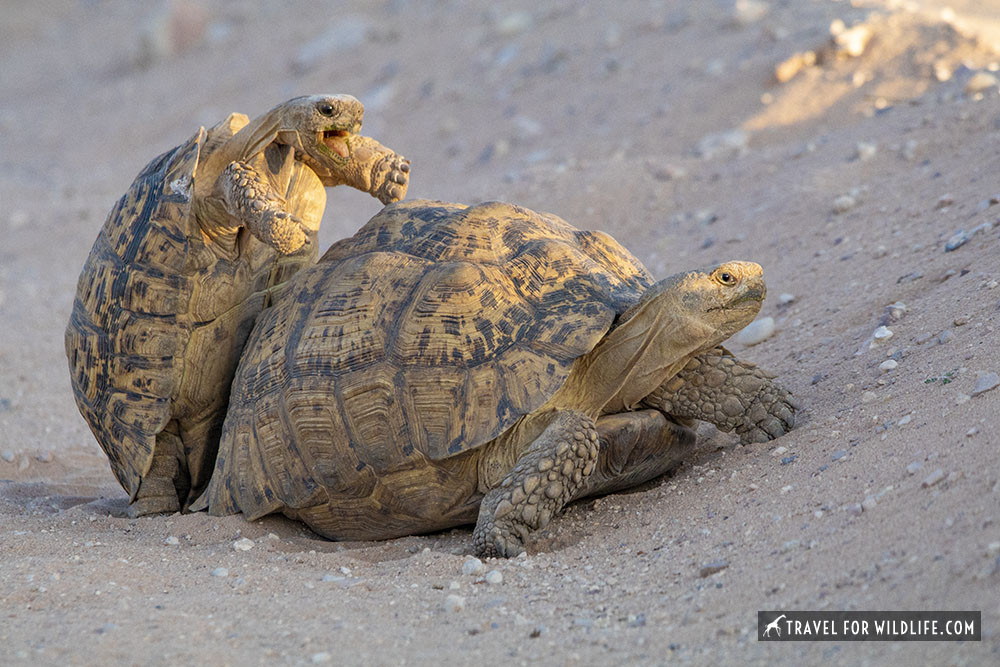 During one of our trips to the Kgalagadi,  we were super fortunate to spend some time with Dr Anne Rassa at Kalahari Trails. A champion of the Kalahari, Dr Rassa took us on a desert walking safari. During that walk she showed us the little things that make this desert a wonderful wild world, including this ant lion! 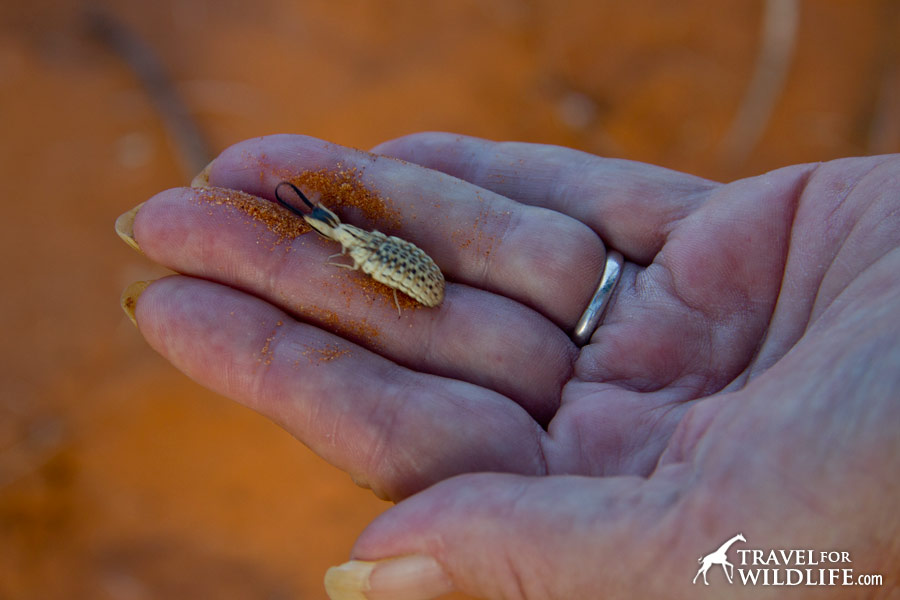 Antlions are insects of the order Neuroptera. Their name refers to the predatory behavior of their larva; fierce as a lion! They dig pits into the ground where they trap ants and other small insects.

How do Antlions Make their Traps?

The antlion traps are easy to recognize. If you see a funnel-shaped pit (about 1-2 inches deep) with a small hole at the bottom, you are probably looking at an antlion trap.

Antlion larvae dig the pit by using their abdomen as a plow, then use their heads as a shovel to get all loose particles out of the way. When it completes the pit, the antlion buries itself so only its jaws project out of the tiny hole in the bottom of the pit.

When a small insect comes across the pit and ventures to the edge of it, it will slip to the bottom. The antlion will take this opportunity to seize its prey with its jaws, just like an ambushing lion. The meal is consumed by sucking out the contents of the prey and its empty skin is flicked outside the pit.

The antlion larvae makes a sand and silk cocoon where he’ll transform into a mature antlion that looks a little like a dragonfly. Mature antlions do not eat, so the larva needs to eat enough to get through adult life. 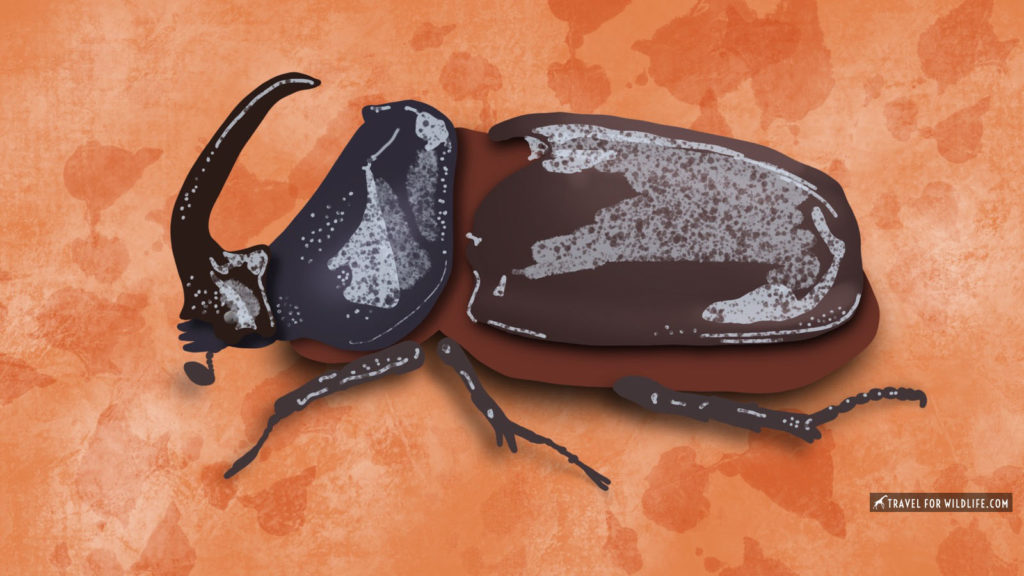 Illustration of a rhino beetle

It is easy to see why this beetle is called the Rhino beetle.

Rhino beetles are actually found in all the continents, except Antarctica. They can even be found in the south east of the United States. Rhino beetles are easily recognizable by their horn-like projections on the males heads. These are used to dig in the leaf litter and are also used to drive other rhino beetle males away from females. These herbivorous insects are extremely strong, and some species can lift up to 850 times their body weight! 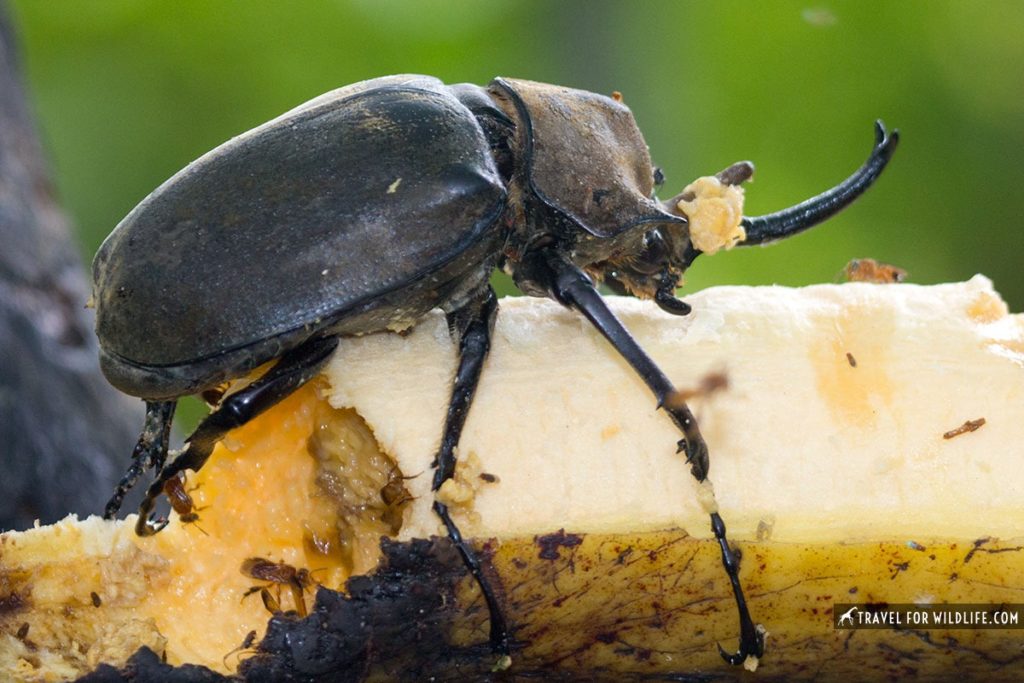 Rhino beetle on a banana in Central America

The Red-billed Buffalo weaver (shown below) is easily distinguished by its robust red bill and white wing patches. Its preferred habitat includes dry thorn veld and broad-leaved woodland. It is a common resident in Botswana, north eastern South Africa, eastern Namibia and the west areas of Zimbabwe and Mozambique. 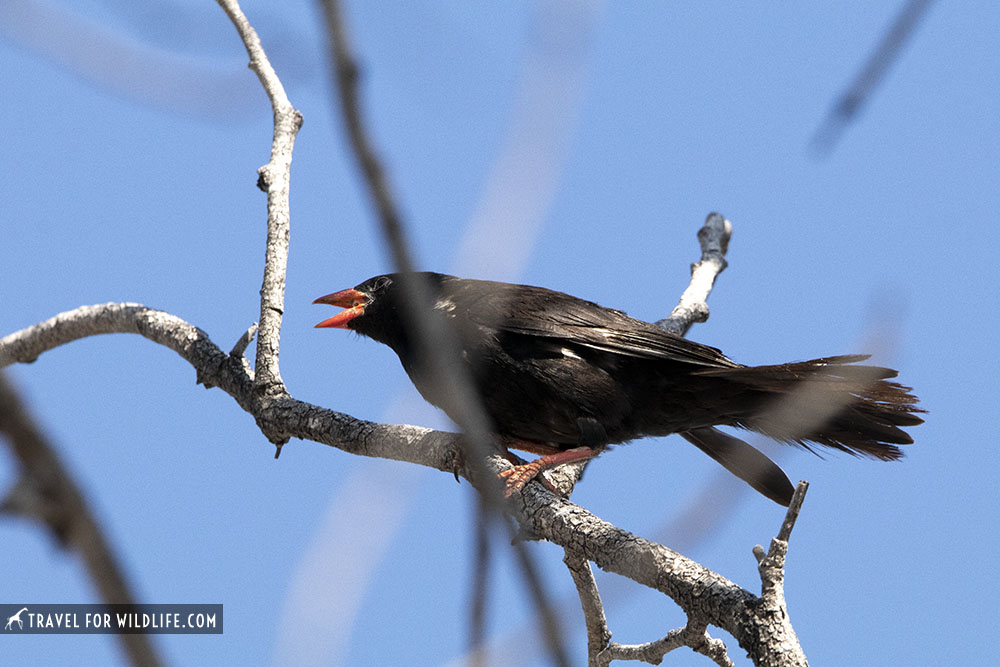 Buffalo weaver calling above its nest

Their nests are easily recognizable as they breed communally in large messy masses of sticks in trees or power poles. If you have traveled around Southern Africa, you have likely seen their nests! We saw this family of buffalo weavers during our last trip to Namibia above a visitor center in Etosha National Park. They were being super noisy while working on their nest!

The name “buffalo” is said to derive from their habit of following Water Buffalo to feed on the insects stirred up by their hooves. 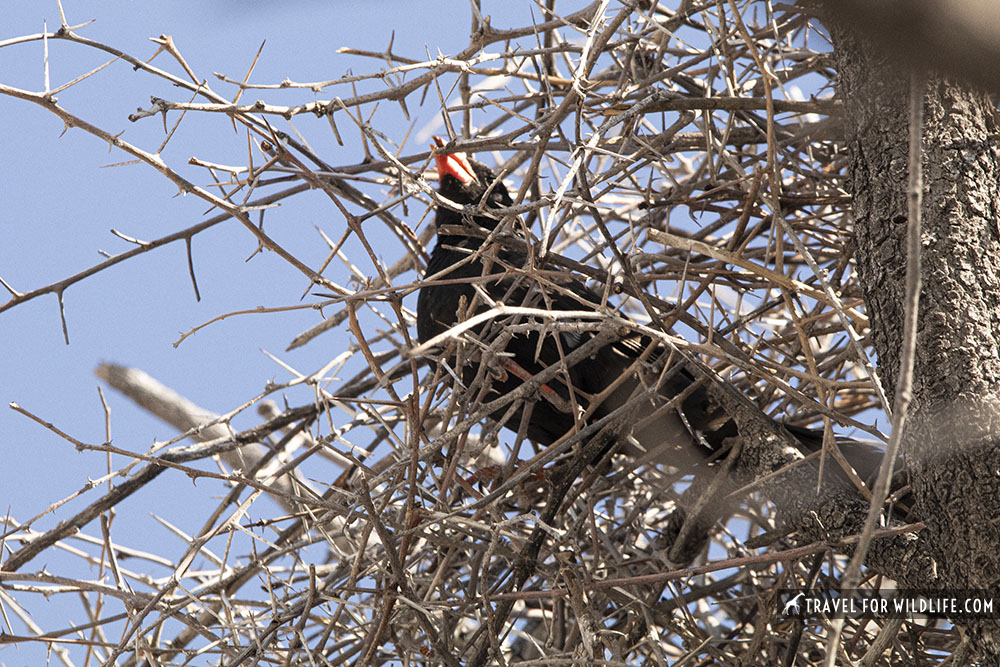 The big five may get all the attention, but if you go on a safari in Africa, don’t forget about the little five! Each one is amazing in its own way.