Spotting Polar Bears From a Plane

The start of a wildlife adventure is always exciting. You cross some vast expanse of wilderness by car or boat or plane in order to reach a remote destination. You scan the horizon, picturing fanciful creatures cresting every wave and hiding under every tree. And every once in a while, your wishful searching actually pays off. Like spotting and photographing polar bears from a plane.

This is what happened to us last month when we were invited to Nanuk Lodge in northern Manitoba by Churchill Wild. We were traveling there to walk with polar bears. A polar bear walking safari! Nanuk Lodge is so remote that to get there you first need to fly to the tiny town of Churchill and then take an even smaller plane out into the wilderness for another hour. We landed in Churchill, transferred to our smaller plane, and that’s when wishful vision set in. We would be flying eastwards, along the shore of the Hudson Bay and over Wapusk National Park. We knew there were brilliant white bears down there among the green and gray landscape. Lots of them. But what were the odds of actually spotting one?

Wapusk was established as a national park in 1996 and, at just over 2,820,000 acres, it is a haven for mother polar bears. It was recently discovered that Wapusk is one of the largest maternity denning areas for polar bears in the world. In February and March, when the land is still covered in snow and ice, tiny three-month-old cubs emerge from their dens for the first time. But now, in late August, is a great time to spot mothers with yearling cubs. 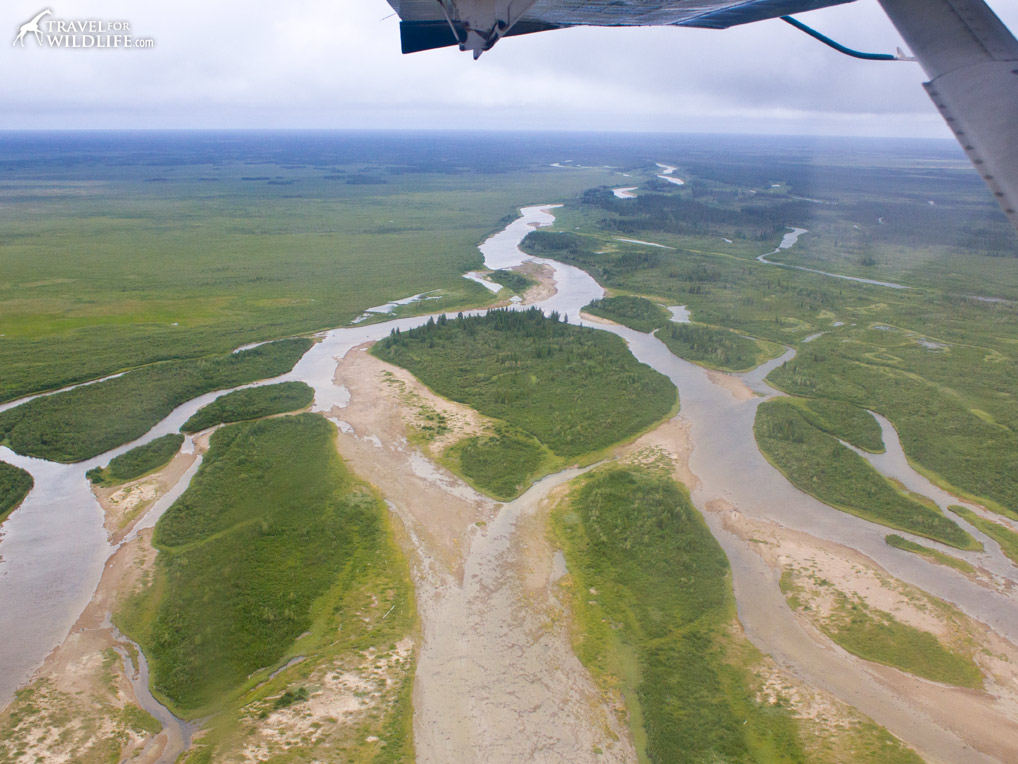 The beautiful northern Manitoba landscape will keep you happy during the flight, even if you don’t spot any bears

Flying low over this vast and pristine wilderness is a humbling honor. To see with your own eyes a land where polar bears den and raise their young, it will stir your soul. This is where legends are born, in this huge peat bog. This is where the King of the North coexists with black bears, wolves, moose, caribou, foxes, and geese. This is the wild heart of Manitoba. And it’s all yours.

Before our plane took off we were instructed to count the polar bears that we spotted along the way. Well that’s a good sign! If we were lucky, we’d also spot beluga whales in the river mouths. Beluga whales are one of our all-time favorites so I wasn’t sure which I was more excited to see from above, polar bears or belugas. Better not nod off on this ride!

The windows were scratched and dirty but we craned our necks anyway to track the ground passing below us. Hal and I each held a camera, hoping against the odds to catch a photo of a bear from the air, although the bouncing of the plane made it next-to-impossible. The outskirts of Churchill faded behind us and suddenly there were no signs of humanity upon the landscape. We passed a small river and hugged the edge of the bay. Wide mud-flats flanked the water and low sand bars jutted out into the muck. Whitish logs stood out on the sand bars, creating decoys for my eyes. Then a white spot took a step and raised its head. It strode purposefully down the beach. A polar bear! Hey! A polar bear! I shouted over the noise but we each wore ear plugs, so instead I gestured frantically. Hal was smiling back at me with wide eyes, a huge smile, and a thumb in the air. Once our eyes figured out what they were looking for, bears started to appear, one after another. Hal frantically attempted to photograph them but it seemed hopeless. 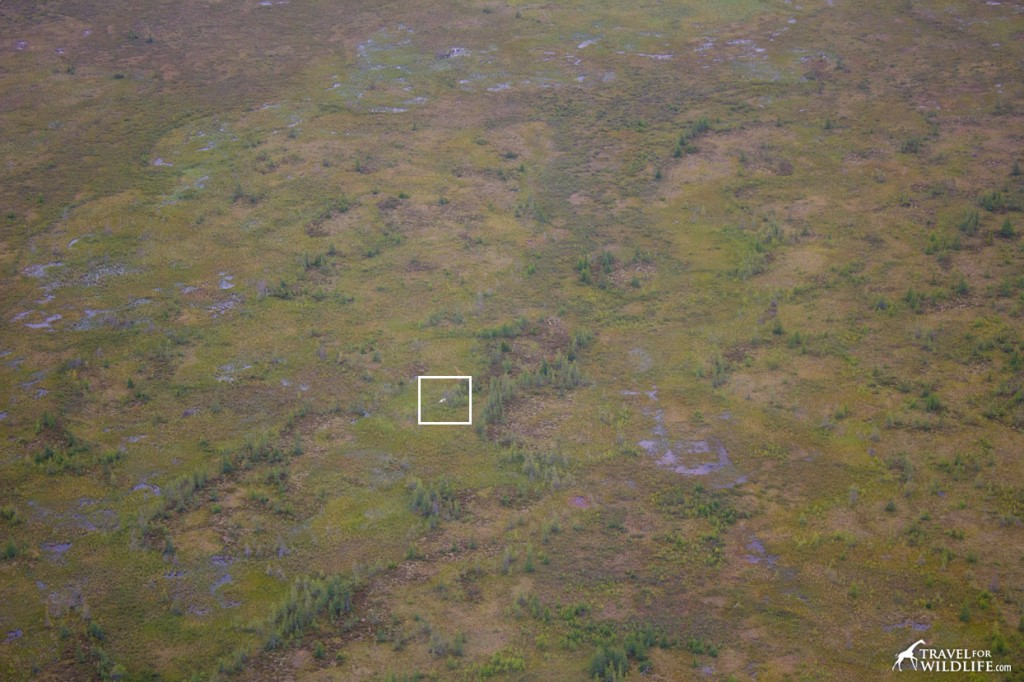 This tiny dot is a polar bear!

Then we began to notice behaviors and even interactions.

One of the most exciting sightings was two polar bears approaching each other in the mudflats from opposite directions. Now a thousand questions popped into my head. Who were they? Did they know each other? Was this a happy encounter? It seemed like they were walking in parallel and then the bear on the left realized another bear was right behind him and decided to investigate. What happened? We’ll never know because we flew on by. 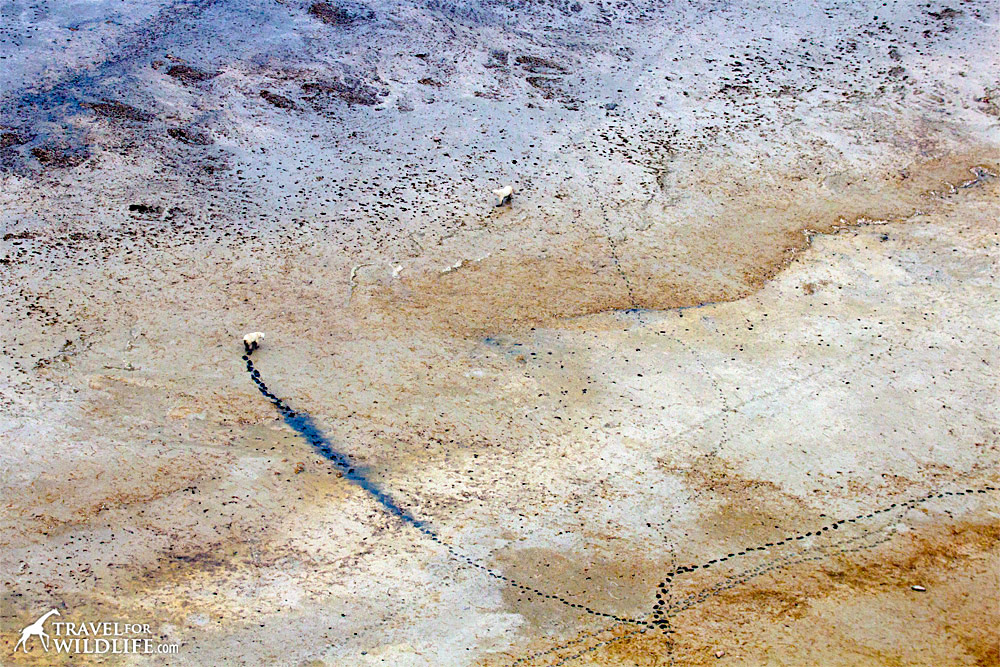 Two polar bears walking towards each other.

After flying above Wapusk for a while, our pilot decided to give us a tour of the water. Time for beluga spotting! When you go to swim with belugas in Churchill, you’ll be in the Churchill River. The water there is murky and visibility is not great, so we hoped for a little better water clarity along the shore of the bay. Success! We managed to spot a few small pods of belugas from the air.

A pod of beluga whales as seen from our plane

Back over land again we began to pick up smaller details and search for other wildlife. One of the things that I enjoyed most was spotting bear tracks. Their feet are so wide and flat that you can actually spot the tracks quite clearly from the air. Each time I found a trail I tried to imagine what they were doing and where they were going. Sometimes these bear trails would travel in wandering circles and sometimes you could tell a bear was really on a mission. Because a polar bear has places to go and bears to see! 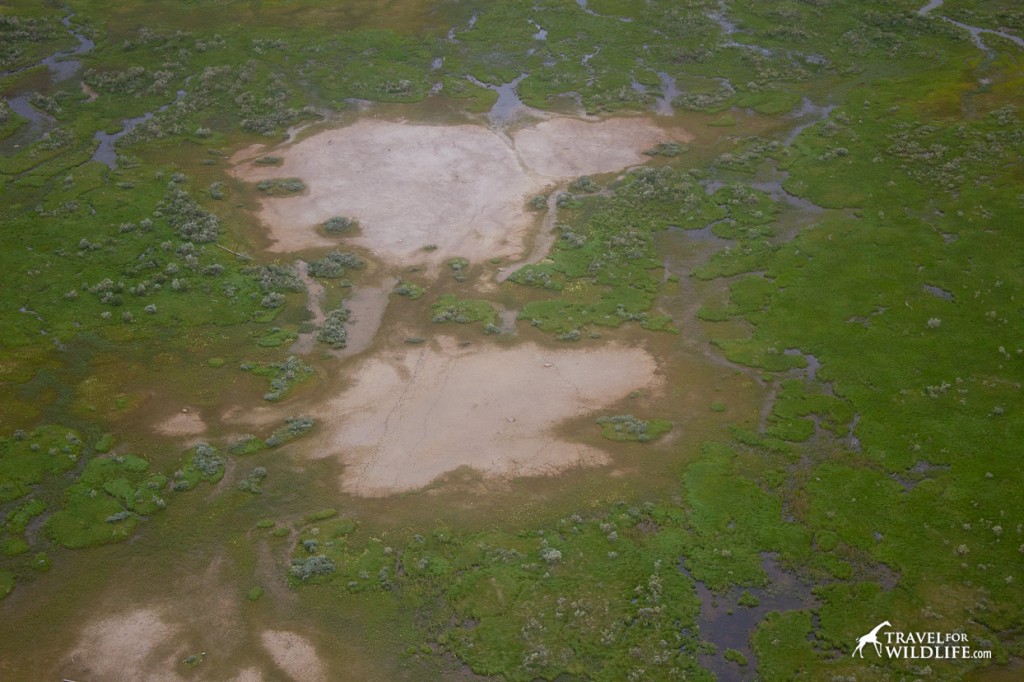 We were told that many bears had been spotted heading westward along the bay, presumably to a kill such as a whale carcass. Though we watched closely, hoping to spot the amazing scene of a group of bears feeding on a beluga, we never laid eyes on it. We did however spot our first mother polar bear and her cub! There is nothing more exciting than seeing the next generation of these incredible animals living their lives where they are supposed to be, in the wild. And here, nobody bothers them (except the whiny sound of our plane). I look at them and I am kind of envious. Living in the wilderness with the company of other bears and wolves and moose and cranes. That’s the life, huh? 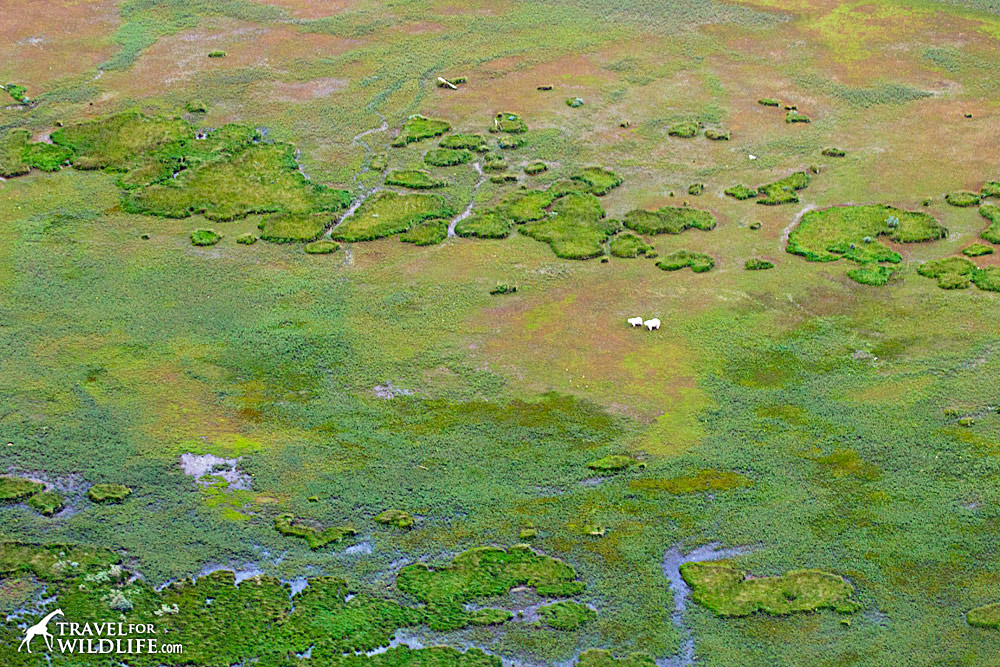 A polar bear and her cub

We also began to notice great flocks of birds. We noticed the careful formations of a platoon of Canada Geese. 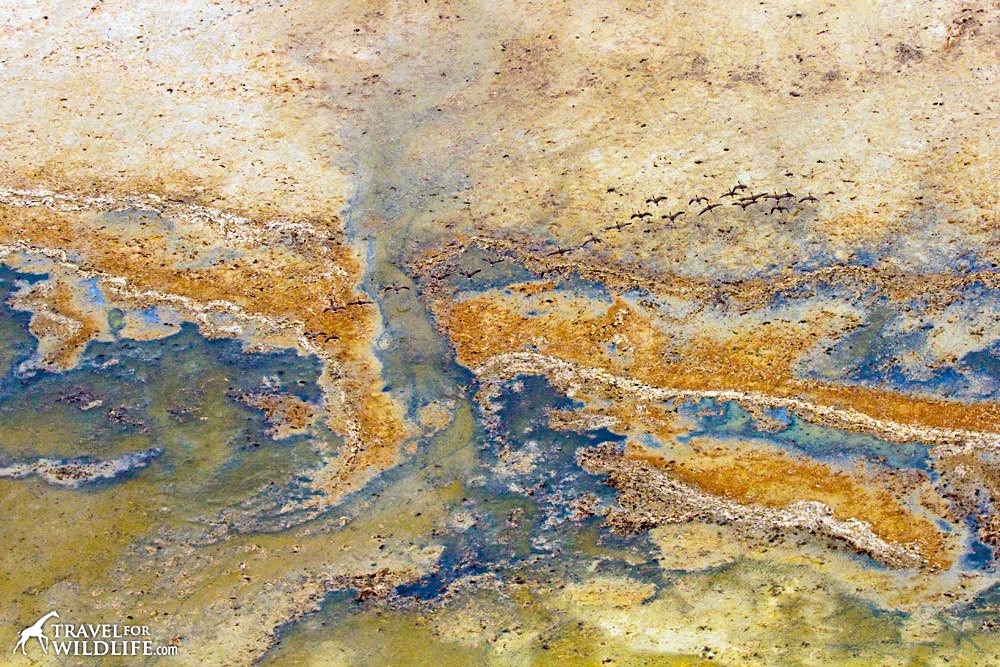 But all the while we kept our eyes peeled for those special white blobs. Eventually we could even tell a napping polar bear from a log. Take, for example, this sleepy fellow lying on a sand bank in the middle of the mud flats and the “hey, what’s that?” look on his face. 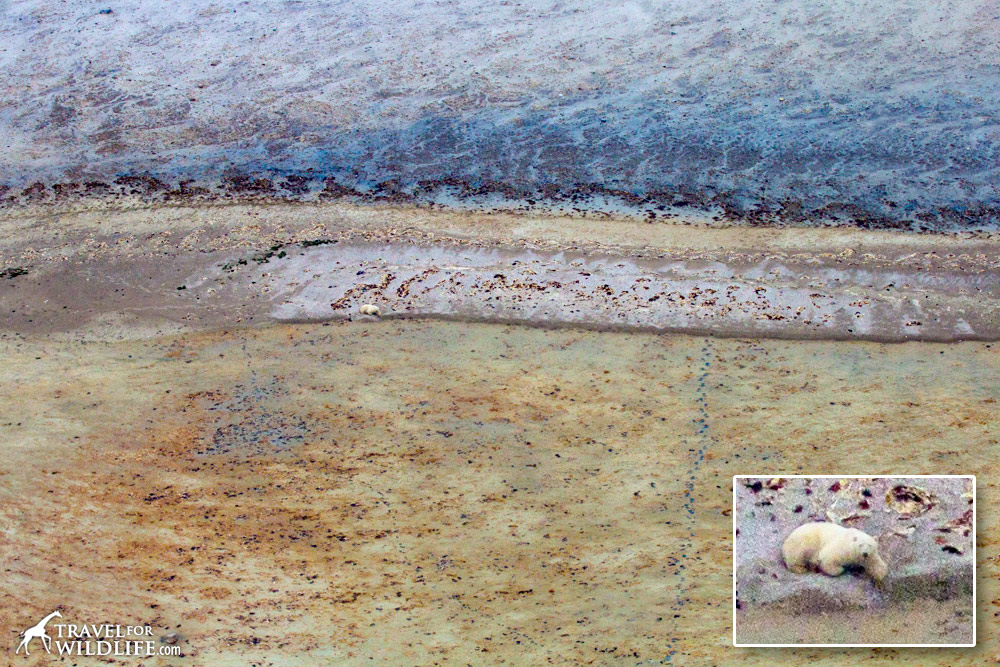 I couldn’t help being reminded of our scenic flight over the Okavango Delta in Botswana. Even though they are in totally different parts of the world, they are each filled with water and wildlife. Here, in Manitoba, you can spot birds, bears, and belugas from above, while in Botswana you can spot elephants, hippos, and giraffes. Equally amazing and mesmerizing. What a wonderful world we live in!

By the end of our flight we had easily seen a dozen polar bears (plus two black bears!) If we had seen all this during our first hour in northern Manitoba and hadn’t even left the plane, what more might we see during our days to come at Nanuk Polar Bear Lodge? For sure, our polar bear walking safari was going to be an incredible experience. 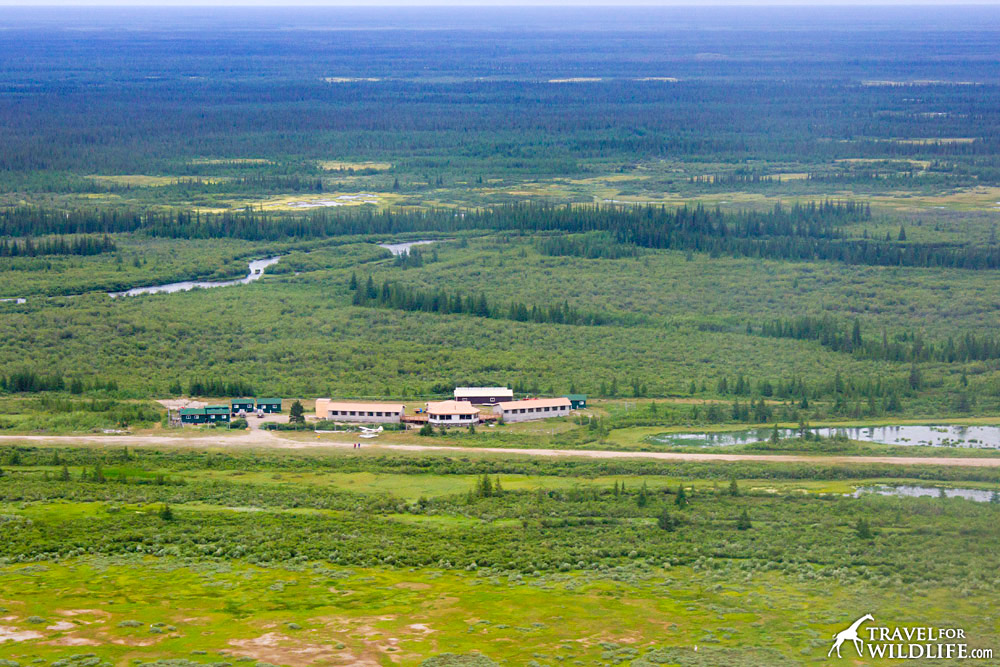 You’ve arrived at Nanuk lodge. What an adventure this will be! 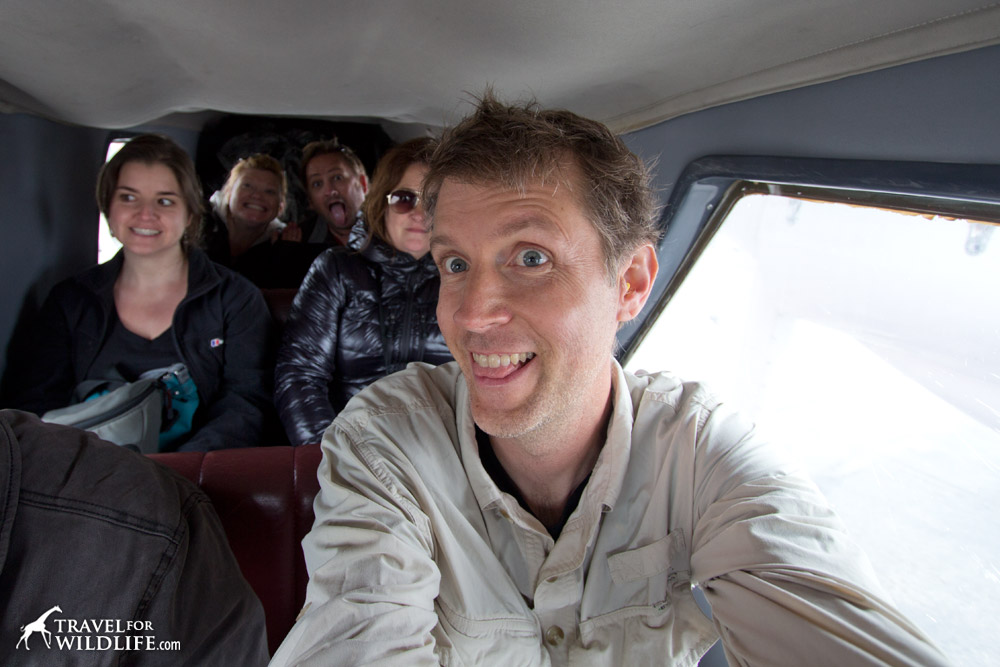 Photography Tip from Hal: Though some may try to advise you against shooting from a plane with a long lens, Hal had his best luck photographing bears using the 100-400mm zoom lens. Here’s the trick: spot with your eyes, then find the bear in the viewfinder at 100mm, then zoom in to 400mm and start snapping.

Have you ever managed to spot or photograph wildlife from a plane? Let us know in the comments below!