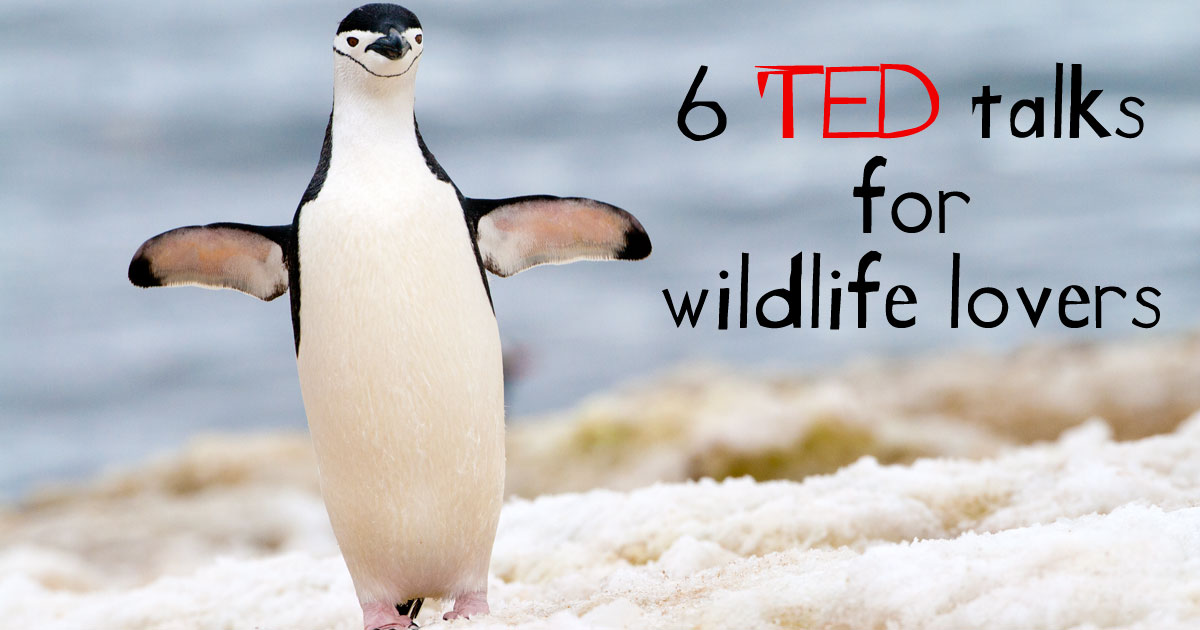 It’s easy to find horrible, negative, mind-numbing video rants on the internet today. We’ve become so used to them that when we accidentally click on something worth watching, it takes us totally by surprise. TED Talks are the new gold standard in videos-worth-watching. They feature passionate intelligent people, eloquently sharing their knowledge and inspiration with the world. If you love wildlife and you’re looking for inspirational videos, check out this list of some of our favorite wildlife and conservation TED Talks. They will fill your belly with fire and give you the inspiration you need to fight the good fight!

Damien Mander, a former soldier and sniper, is the founder of IAPF (International Anti-Poaching Foundation). He uses all his military training, knowledge, and experience to combat wildlife poachers in Southern Africa. In his talk, Damien shares with us the moment his life turned around. Standing in front of a dead elephant who’s tusks had been hacked off, he decided to follow a path of wildlife conservation and to fight wildlife poaching.

“Just because we are not seeing it close, it does not mean we are not responsible.”

[easy-tweet tweet=”Does that elephant need its face more than a guy needs a tusk on his desk? – Damien Mander ” user=”travel4wildlife” template=”qlite”]

This is the first TED talk that I watched from beginning to end. And every once in a while I even go back and watch it again.

And it gets me. Every time.

This is a very inspirational video and I guarantee that when you finish watching it you’ll want to get out there and fight for the voiceless.

Why do we consider ourselves different and better than any other animal?

I too am an animal. We are family, together on one planet. And of the 5 million of species on the planet, only one species has the power to determine what level of suffering is acceptable for all of the true sentient beings to endure. – Damien Mander

2. Carl Safina: What Animals Are Thinking and Feeling? – TEDxMidAtlantic

Earlier this year I had the pleasure of seeing Carl Safina give a talk here in Asheville. His talk was a cautionary one. An uncontrolled increase in human population has created a series of global problems that spell a death sentence to a great many species and habitats. Global warming, pollution, plastics in our oceans… the list goes on and on.

When you look at these problems it is very easy to feel a sense of despair and to think that humans are awful and there’s nothing we can do to save our planet from certain demise. But as Carl Safina believes, we shouldn’t hate humans. Instead, we should increase our circle of compassion as “each time we move ourselves farther from the center of universe, time has shown it was the right thing. The more compassion, the more human we are.”

[easy-tweet tweet=”We have things going on in our minds that we tend to assume are exclusively  human, but there are other brains out there – @carlsafina” user=”travel4wildlife” template=”qlite”]

With his latest book, [easyazon_link identifier=”1250094593″ locale=”US” tag=”traforwil-20″]Beyond Words: What Animals Think and Feel[/easyazon_link], Carl Safina goes deeper into the minds of animals and explains how we are not so different from one another. We all have brains, we all have personalities, and we are more similar to one another than we might have thought. And this is what Carl Safina’s TED Talk is about. Exploring different minds, different personalities, and different brains in different species.

We are all animals, after all.

I don’t really know anything about manta rays I thought to myself when I came across this talk by Andrea Marshall. And that was a very good reason to watch it.

Andrea Marshall is the founder of Marine Megafauna Foundation. She is the first person in the world to conduct a PhD in manta ray research and in 2008 she discovered a new giant species of manta ray.

Want some answers? You’ll just have to watch her talk.

“Manta populations across the globe are plummeting because people are targeting them in huge numbers, extracting all of their body parts to use in bogus Chinese medicinal products” – Andrea Marshall

4. Jane Goodall: How Humans and Animals Can Live Together

There’s probably not much we can say about Jane Goodall that you don’t know already. She’s one of the most iconic and charismatic faces in the conservation world. Her research on chimpanzees and her efforts to observe and conserve all species has won her many accolades from governments, universities, nonprofits, and professional organizations, including a medal from UNESCO and the French Legion of Honor in 2006.

What draws me to her is that she believes that conservation has to be tied with compassion and that we all have a choice to make.

Through her community-centered program TACARE in Tanzania and the global youth-led community action program Roots and Shoots, the Jane Goodall Institute works to help people coexist with the local wildlife. Only when wildlife and its habitats are preserved, will humans be able to live in peace.

Chimpanzees, I believe, more than any other living creature have helped us to understand after all that there is no sharp line between humans and the rest of the animal kingdom. Is a very blurry line and is getting even blurrier, more blurry over time as we make more observations. – Jane Goodall

Derek and Beverly Joubert are conservationists and documentary film makers based in Botswana. For over 25 years they have worked to inspire generations to conserve the natural world, and they are especially interested in big cats. Their style goes beyond the science and digs into the personalities of the stars of their documentaries. With this approach their goal is for us to feel closer to wildlife.

Their recent acclaimed film, The Last Lions, takes a look into the lives of the lions that live in the Okavango Delta in Botswana. Lions are disappearing at an alarming rate and with The Last Lions, they raise awareness of the plight of these amazing wild cats.

We all know Paul Nicklen for the famous photos he took in Antarctica when a leopard seal was trying to feed him a dead penguin as if it were a present. When he decided to head to the Antarctic to photograph leopard seals, all he wanted was to change the public perception of these fascinating animals. From bloodthirsty predators of the ocean, to the majestic seals that they are.

Paul Nicklen has devoted his professional life to documenting the wonders of the Arctic, the Antarctic, and the Great Bear Rainforest, and this video is full of tales from his adventures in conservation.

I don’t know about you, but I feel pretty inspired right now!