Where to See Grizzly Bears in the Canadian Rockies: Lake Louise Gondola

Disclaimer: this post contains affiliate links. We get a small percentage of sales through this links at no cost to our readers.

Joe was peacefully munching on some berries when she heard a shout from the woods.  She stood up, looked around quickly, and then turned and ran up hill, her large round rump rippling as she bounced nimbly up the slope.

Seconds later a pair of hikers emerged from the same trees, backing slowly and nervously away from the scene with arms raised in a sign of appeasement. Why all the fuss? Well, Joe is no ordinary lady. She happens to be a fairly large grizzly bear. 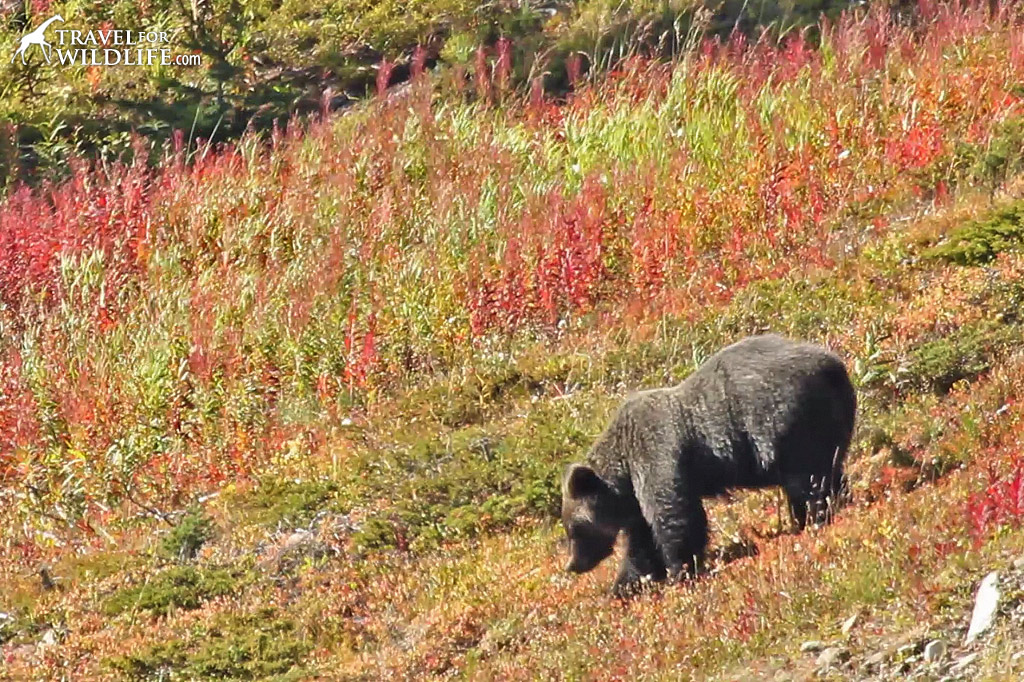 Joe, more formally know as Bear 138, is the grizzly most commonly sighted around the Lake Louise Gondola in Banff National Park. But at least four other bears are also occasionally seen in the neighborhood, which is how this Alberta, Canada attraction has earned the reputation of being “The Best Grizzly Bear Viewing in the Rockies”.

When I first spotted the billboard while driving along the Trans-Canada Highway, I admit I was skeptical. How could a ski-lift possibly have predictable grizzly bear viewing when we had so far seen only one on our entire American Safari? A quick glance at a map shed some light on the phenomena.

It is generally accepted that the Bow Valley Parkway is the best wildlife watching road in the Lake Louise area of Banff National Park because it runs through prime wildlife habitat and is relatively untraveled. If you follow the path of this wildlife corridor toward the Northeast, past Lake Louise, it leads straight to the slopes of the Lake Louise Sightseeing Lift & Gondola. That is why hiking is not allowed between the lodge at the base and the station at the top of the lift: because it is a protected wildlife corridor. But what were the odds of us actually seeing a bear during the fifteen minute ride to the top? We intended to find out. 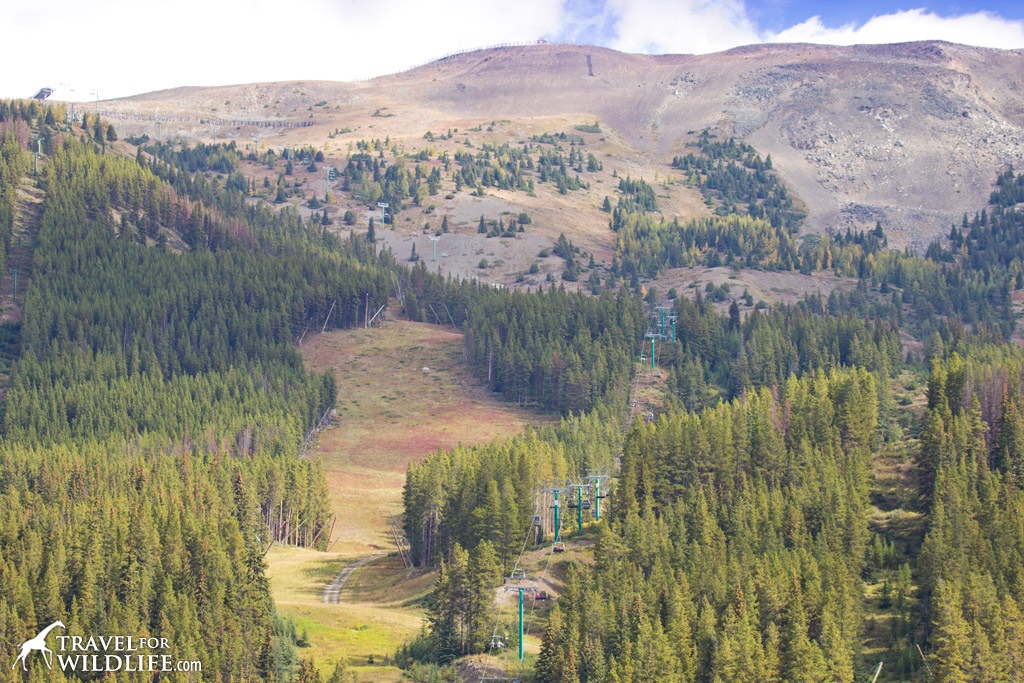 The area beneath the Lake Louise Gondola is a prime wildlife corridor where no hiking is permitted.

The website Lake Louise Gondola displays a calendar that chronicles grizzly sightings at the gondola. Nearly every day for the past three months bore the stamp of a bear paw and the word GRIZZLY beneath. This meant that at least one bear was sighted on the grounds between the hours of 9AM and 6:30PM (operating hours for August and early September). Not bad odds it would seem. I was feeling hopeful. 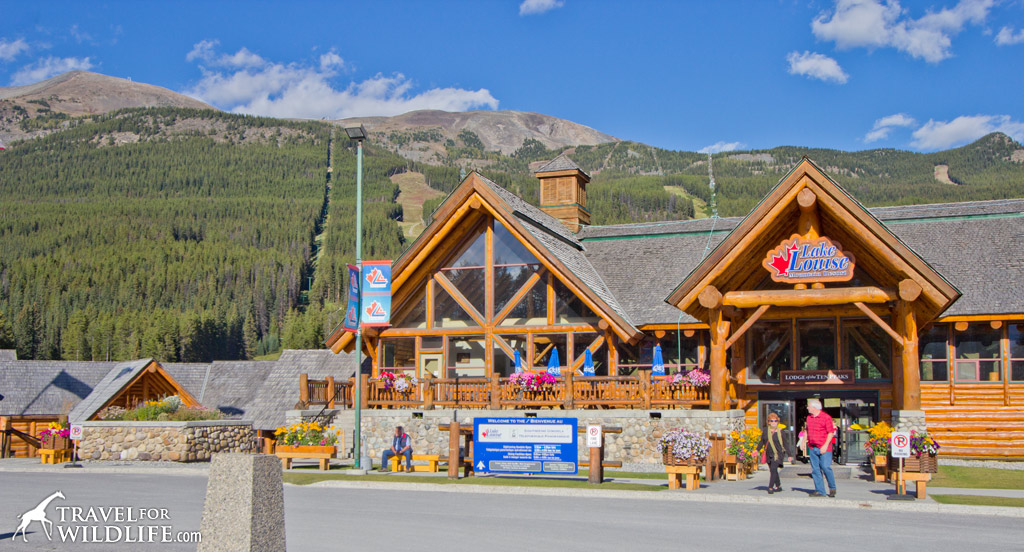 The lodge at the Lake Louise Gondola

When we arrived at the grand log structure next to the parking lot, we learned that tickets were $28.75 but that we could add a buffet lunch for only $6.50 more. It was only 11:45 in the morning but our stomachs were already rumbling from the smells wafting through the lodge. The bears could wait a few more minutes. We chose a table on the back deck with a spacious view up the hill. Then we deftly maneuvered around busloads of Asian tourists and filled our plates high. I kept my binoculars handy in case a bear ambled by while we stuffed our stomachs to maximum capacity. 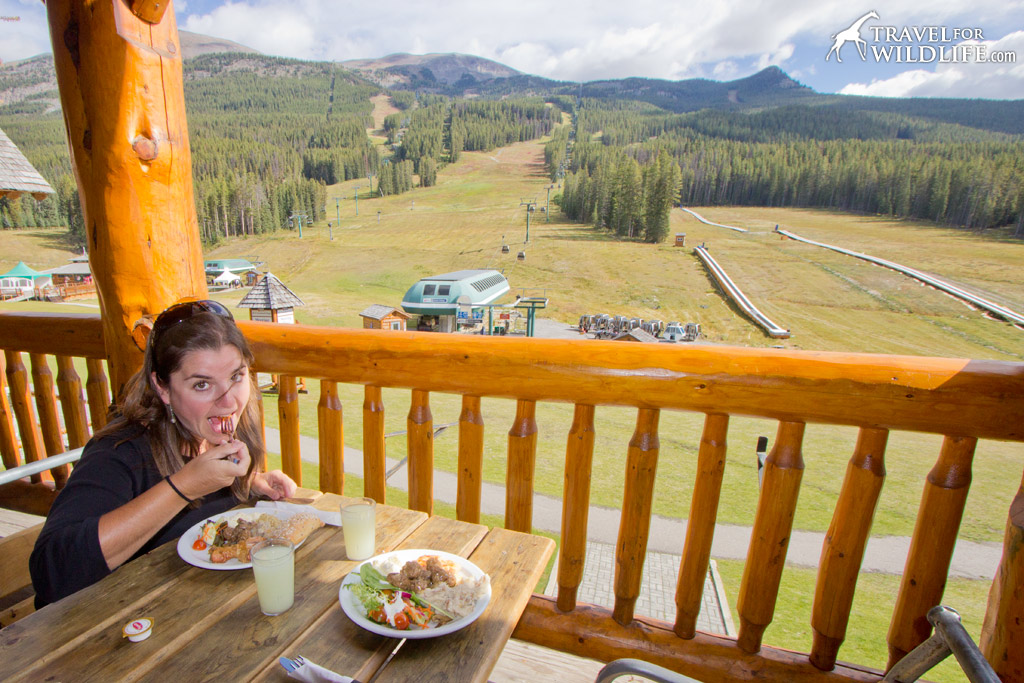 Stuffing our faces while watching for bears.

After two dessert courses and coffee, we dragged our round bellies to the base of the lift, cameras at the ready. We were ushered into a dimly lit room where an orientation video was played. We were glad to see it emphasized the bears’ role in the environment, how to behave safely around them, and the fact that wildlife gets first priority in the park. Then we filed into a line and waited expectantly. Riders can choose between an enclosed gondola or an open chair. While the gondola offers the opportunity to look around in any direction, the chair allows for unimpeded photography (no glass in the way) so we opted for the second. We soon learned that is also good for making you nervous if you’re afraid of heights. 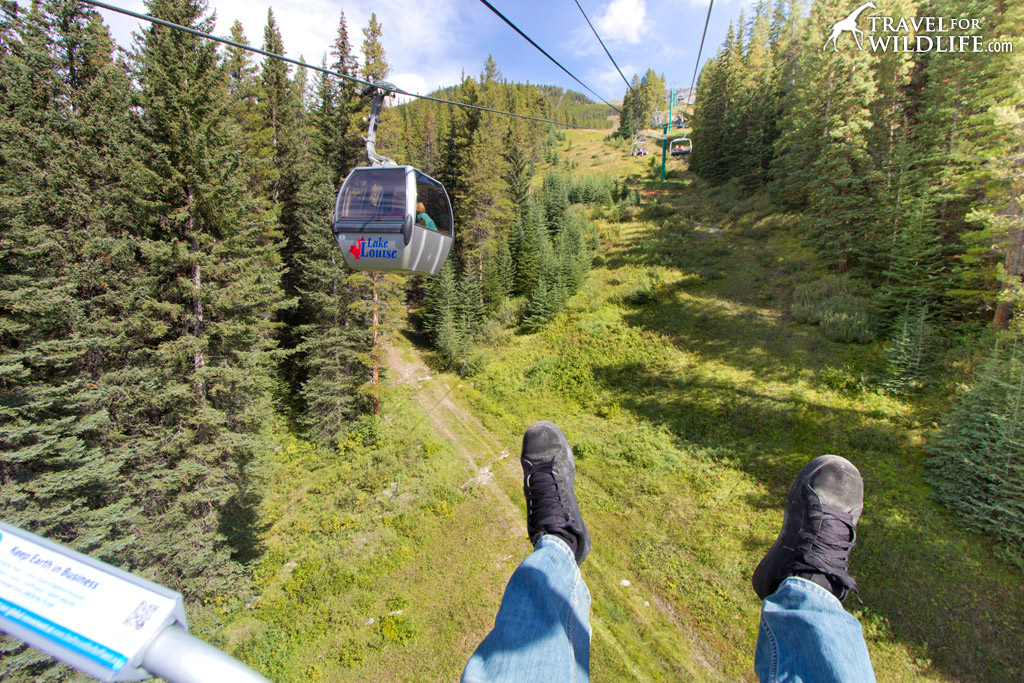 Not recommended if you’re very afraid of heights.

“There’s a bear around, keep your eyes peeeeeled!” squealed a tiny girl heading down the mountain with her parents in the opposite direction. The open grassy patches which function as ski slopes in winter make for excellent viewing windows through the dense forest. Suddenly something brown and furry appeared in the center of a slope to our left. We strained to see, and then noticed a velvety pair of antlers sticking out of its head. A large mule deer buck. Not exactly what we were looking for, but still great to see him grazing calmly in the meadow below.

A large mule deer buck below the lift.

We reached the top, bearless but undaunted. Just below the top of the lift was a viewing platform with spectacular views across the valley. I saw a young woman with a name tag and asked her if bears had been sighted today.

“Well, a guy said he saw a bear walking from that building over there,” she pointed to a maintenance shack, “into those trees. That’s why I’m here, to see if she shows up.”

“Yes, it’s probably Bear number 138, collared and tagged by the park service. She’s the one who’s around most often. She was playing just under this viewing area for almost six hours on Thursday. They named her Joe when they thought she was a male but the name stuck. She’s our girl.”

We watched for a few minutes, waiting to see if she might emerge, but the mid-day sun strengthened our desire to visit the wildlife interpretive center just down the gravel road.

Inside we read about all the creatures in the area, posed with the dead bodies, and ogled the massive kodiak bear skull. 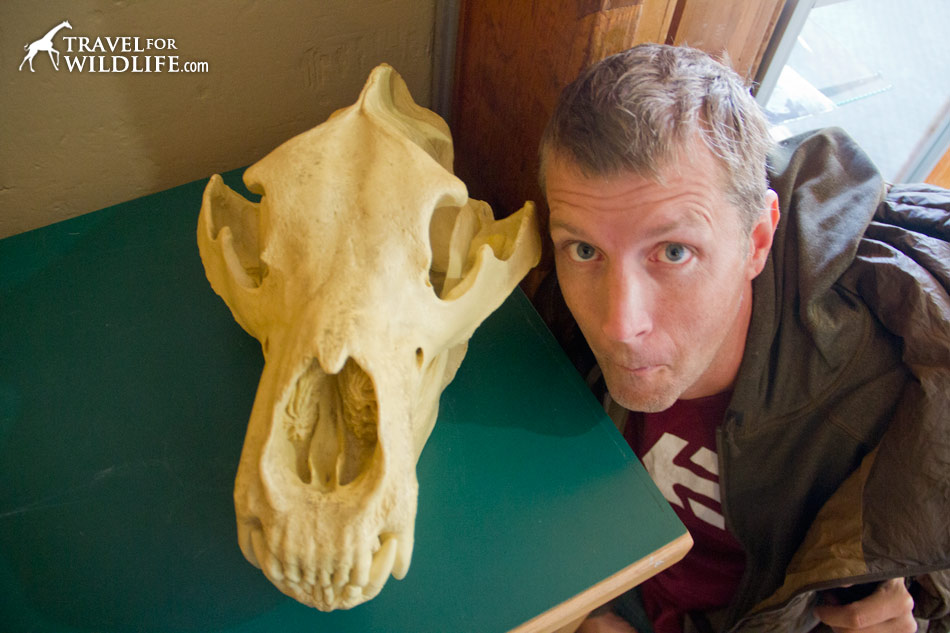 Then a program began that we were very interested to see, about remote sensing wildlife studies in the national park. We watched awesome videos compiled from trail cameras around the park, capturing every sort of large creature in North America from cougars to grizzlies to wolverines. When we had cooled off sufficiently, we trudged back up the hill to search for the elusive bear. We contemplated a hike up the pika trail (because we really love to watch pikas) but our full bellies and sweaty backs convinced us otherwise. Instead we opted to take advantage of a little known tip that the employee had revealed to us earlier:

TIP: You can ride the Lake Louise Gondola twice with your ticket!

She told us it was an unadvertised fact that you are allowed to ride the gondola twice with your ticket purchase, so we decided to continue our lazy wildlife watching and hop back on the lift. The ride down offered stunning views to Lake Louse in the distance, a tiny brilliant blue disk hovering amongst dark green forest. Perched at the edge of the lake we could see the Fairmont Chateau Lake Louise four miles away. This would be a pretty cool place to stay in the neighborhood if you’re checking out the gondola (check rates and availability for Fairmont Chateau Lake Louise here ). 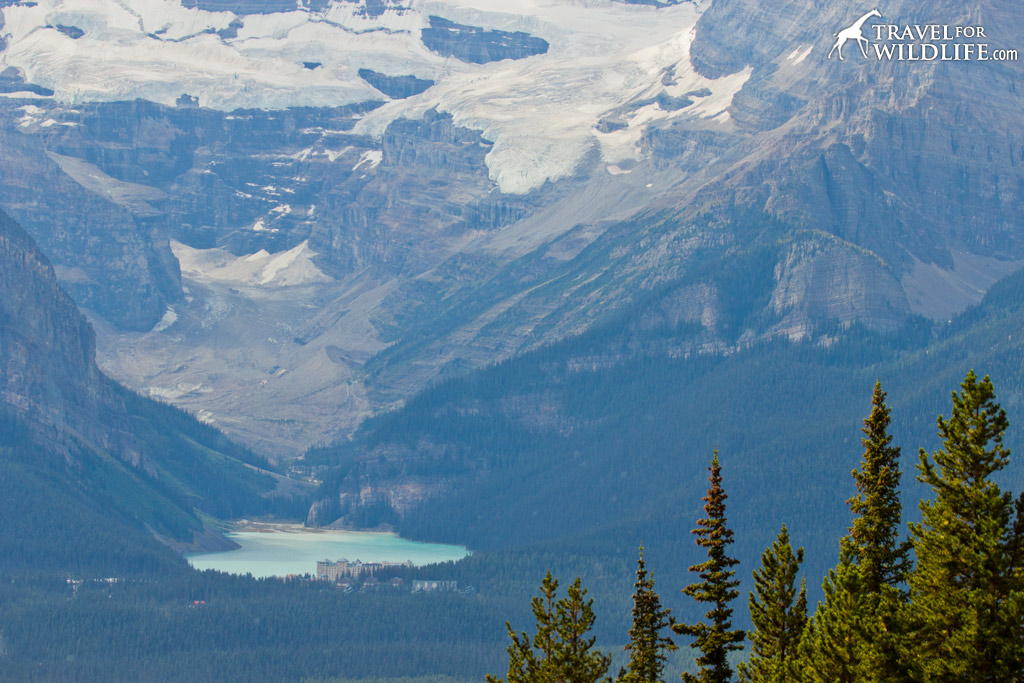 But still no bear. At the bottom we turned around and jumped right back on the chair (no one asked to see our ticket) and began the climb again. When we reached the top, I admit I was starting to feel disappointed. We walked somewhat dejectedly to the viewing platform and parked our butts at a picnic table with the other visitors.

Within two minutes, people were stirring and murmuring and pointing. We jumped up with our cameras and there she was. It was Joe (later confirmed by a Lake Louise employee). She was gobbling up berries on a hillside, just past the chair lift. There were about twelve us on the platform and we all talked excitedly and jostled for camera positions. Joe went on with her daily business, oblivious to our excitement. 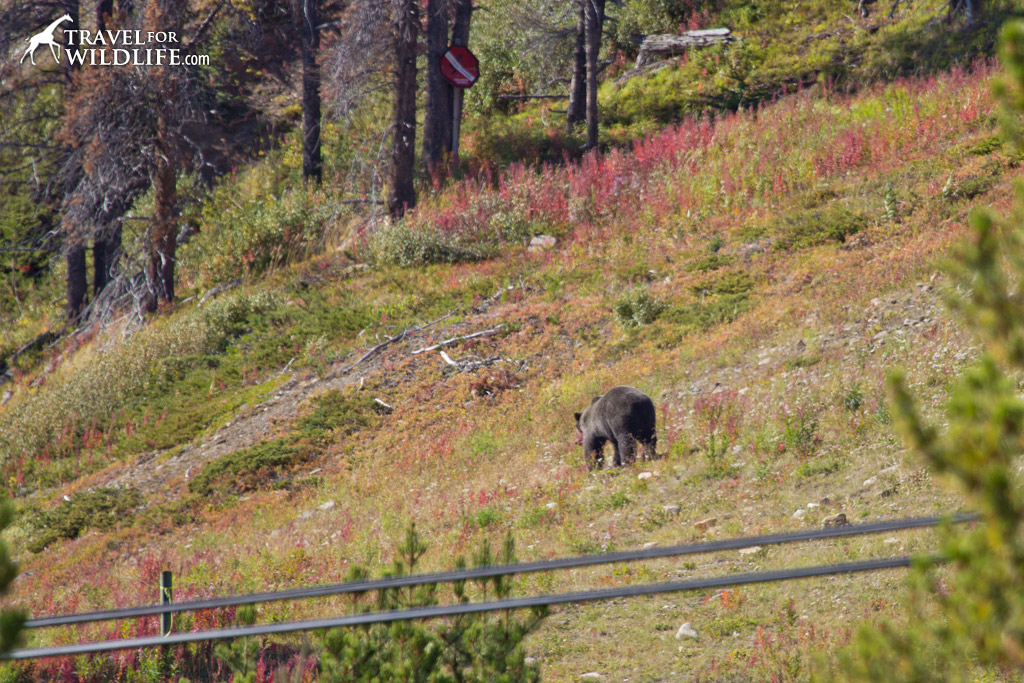 Bear 138, also known as Joe, feeding next to the lift at the Lake Louise Gondola

After a few minutes she wandered up into the trees and out of sight. I kept scanning with my binoculars until she emerged again higher up. Still browsing happily she wandered aimlessly along the edge of the meadow, vacuuming up goodies as she found them.

That’s when she heard the shout and stood up. That’s when she bolted into the forest and a pair of hikers emerged behind her. The good news is, both parties left the scene unscathed. However, three other hikers arrived from the opposite direction and actually hung around, trying to approach where Joe was last seen. This was very poor human behavior so Cristina alerted park staff who drove up the hill and diplomatically sent them on their way.

It’s not easy being a grizzly bear in an area that is so heavily populated with humans, but if we treat them with respect, reduce our impact on their habitat, and allow them to go on doing what they do, it is possible for us to live with them peacefully. Joe wandered off to continue fattening up for winter and we successfully saw a grizzly bear at the Lake Louise Gondola. All was well.

If you’re in the Canadian Rocky Mountains and you’d like to try your luck at seeing a grizzly bear, head over to Banff National Park and ride the Lake Louise Gondola. For more information visit lakelouisegondola.com 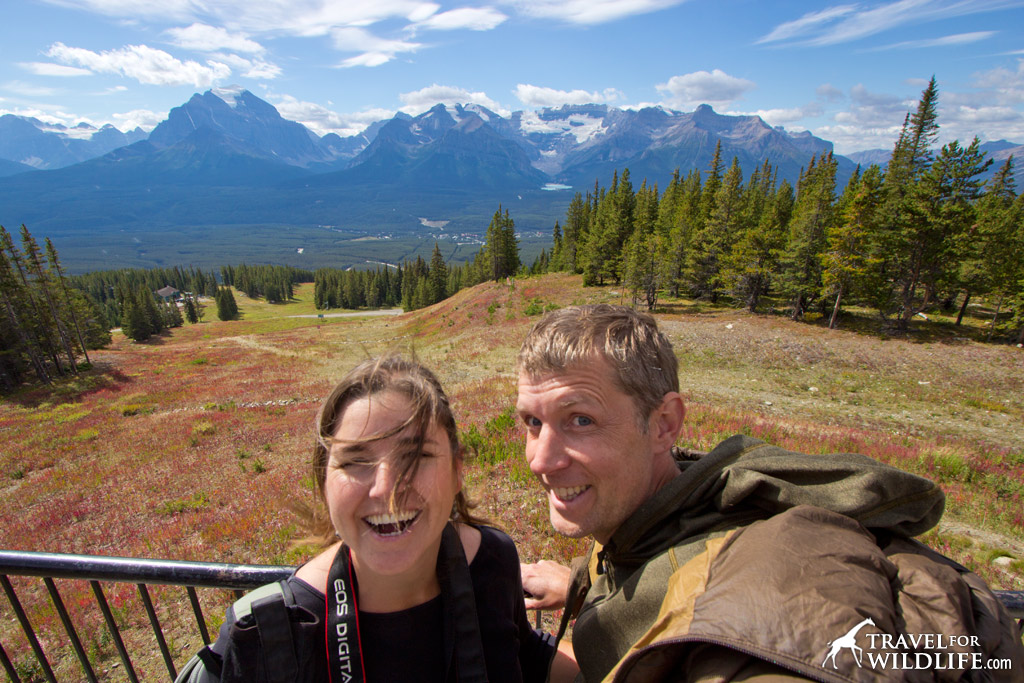 Where to Stay in Lake Louise?

Our recommended place to stay while visiting Lake Louise is the above mentioned Fairmont Chateau Lake Louise (check prices and availability here). Not only is just 4 miles from the Lake Louise Gondola, but where else can you get fantastic front row views of Lake Louise from your bedroom? Nowhere! And here’s a tip: the hotel is just a 27-minute walk to the amazing Plain of Six Glaciers Teahouse (see photos and reviews here). The Plain of Six Glaciers hike is a must-do at Lake Louise. We should all get a scone with jam after a hike, right?

Located near the Lake Louise Visitor Center, the Lake Louise Inn is a more affordable option. It is just a 30 minute walk to the Gondola and a 45 minute hike to the Plain of Six Glaciers Teahouse. Some of the rooms have great mountain views. Check prices and availability for Lake Louise Inn here. 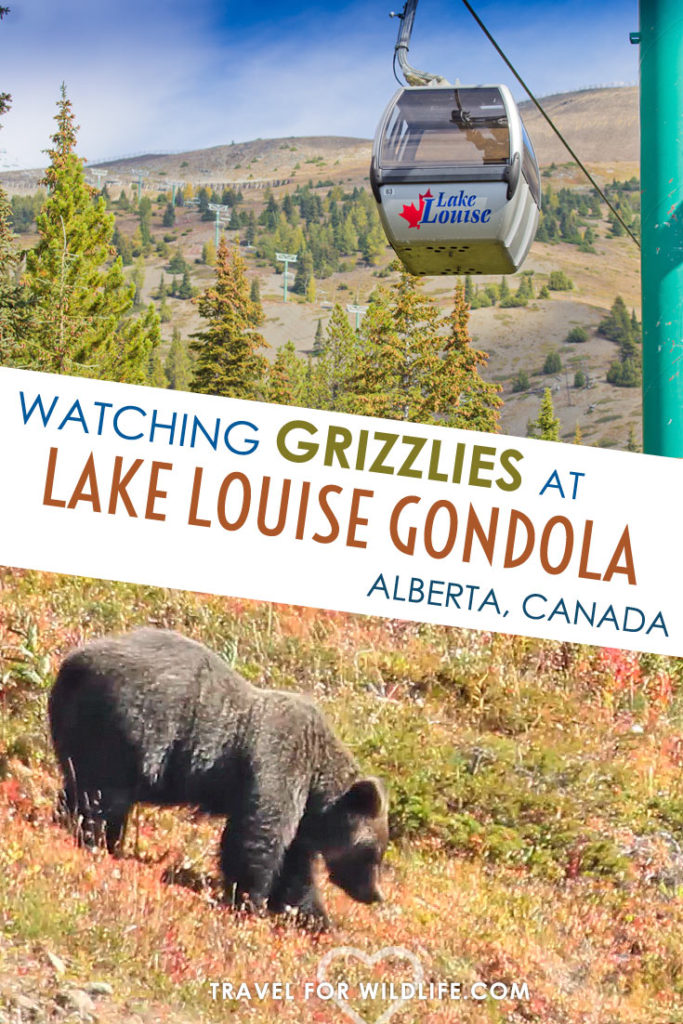