“Bears have right of way”  says the sign posted in the Fisheries Pool Campground in Tweedsmuir Provincial Park, British Columbia.

Jefferson, our host at the Great Bear Chalet, gives us the same instruction. If you see a bear, do not stand in its way, gently move over or back down. Do not run or become agitated. Be gentle. Bears live here and they just want to do their own thing. So every morning, before we go on our hike we are reminded of what to do in case we encounter a grizzly. 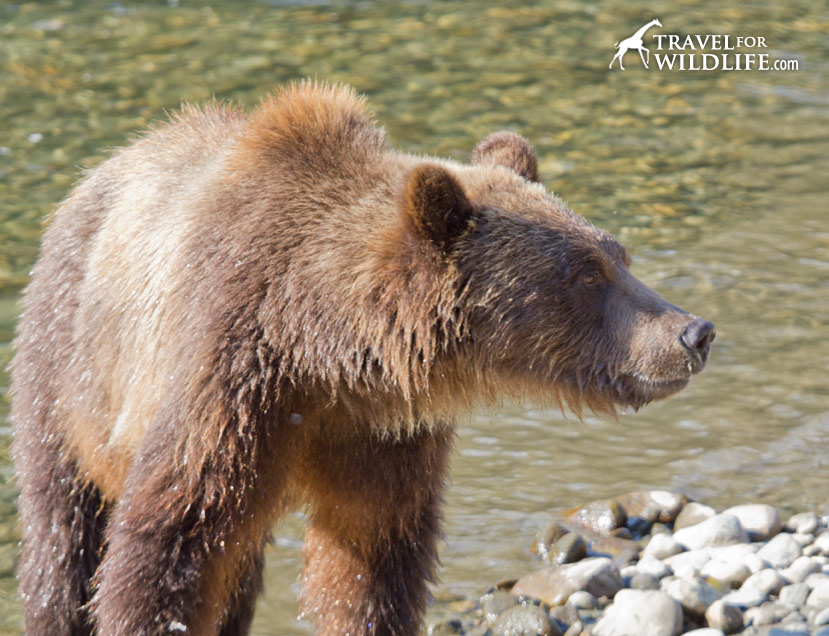 Bears have right of way in Tweedsmuir Provincial Park

This morning we set out for an early hike. By 7:15 AM we were already on the trail, heading toward a beautiful meadow which Jefferson has a soft spot for. On arrival we found a surprise waiting for us; a very big male was happily fishing in the river. Sitting contentedly in the water, he grabbed a fish and started eating it like a large submarine sandwich.

We were all concentrating on this male. Hal was filming while Jefferson and I crouched quietly and watched with our binoculars.

I put my binoculars down and turned my head to him to follow the conversation, when suddenly my eyes became very wide.

A mother bear and her cub were walking toward us directly behind Jeff’s head. They were less than 100 feet away and we never heard them coming.

“Bear…”, I whispered as adrenaline rushed through my veins. Jefferson turned his head in their direction.

Hal turned away from his camera just as the mother bear stopped and stood up for a better look. None of us moved. We just continued to crouch in the small dirt road between the tall yellow grasses.

Their heads moved from side to side as they assessed the situation: what were we, how many, and what were our intentions.

She stood there for a few seconds and then dropped back onto all fours. We held our breath. The large male was still fishing in the river, oblivious to our elevated heart rates. Then mother and cub casually turned to the side and disappeared into the grass. We looked at each other with huge eyes and huge grins. Then we slowly stood to look around. The two had already bypassed us, making a small detour and carrying on with their journey. The mother’s back was already trustingly turned to us as they melted into the trees. We all laughed happily and were just turning back to the river when we heard a splashing from the bank below. Out popped the mother and cub fishing in the salmon spawning channel beneath us. They had circled around us, rejoined the path, and headed straight to the river. 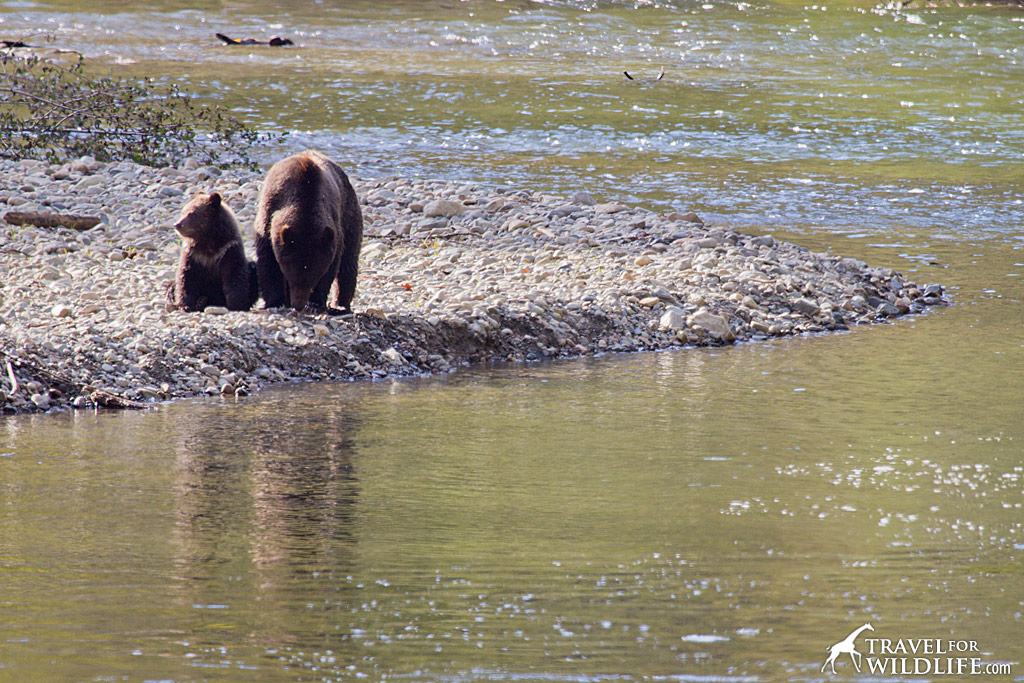 Mother bear and cub at the Atnarko River

All they wanted was to get down to their favorite fishing spot. They were surprised to see us, but when they realized we were no threat they gave way and went around without looking back. There were no vicious threats, no charges or claws or roars. This was not the movies. In real life, bears are just individuals trying to go on peacefully with their lives.

By now the large male had moved on around the bend and mother and cub had the channel to themselves. We watched happily as mom hunted for breakfast while the cub entertained us with his silly antics. It was a great moment for us all.

Mother bear really showed us how kind and considerate these creatures are. And I hope we can return the favor.

If you want to have your own amazing grizzly encounter, check out the Great Bear Chalet in British Columbia.