Slapped by a Sea Turtle (a Conservation Vacation in Costa Rica)

It’s a hot July day on a remote beach in Central America, but I am far from relaxed. I am intensely focused on the job at hand and frankly a bit scared. Our goal is to flip a huge turtle back over onto her belly and I have been assigned a nerve-wracking task: to protect that all-important front flipper from getting crushed under her own tremendous body weight.

There are five of us holding onto her from various awkward angles, but a dozen more humans mill around us in various directions. Our mission is to quickly and safely record her vital statistics, collect a tiny DNA sample, place a metal ID tag on the trailing edge of her flipper, and release her back into the sea. The data about population structure, health, genetic origin and habitat use will be used to assess the types of threats that sea turtles face in this area. 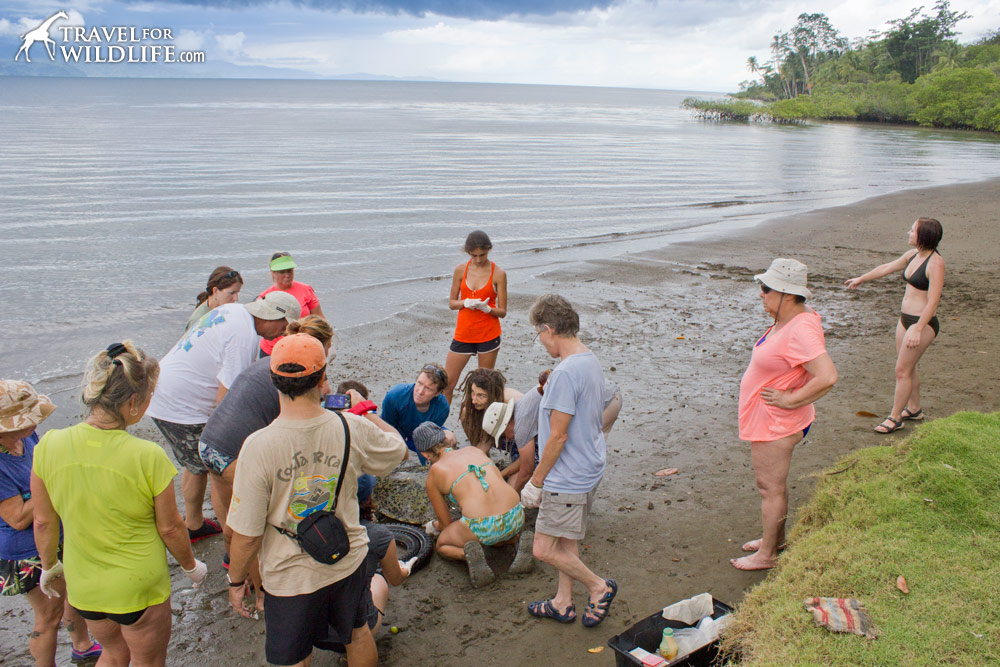 Volunteers working along the coast of Golfo Dulce, Costa Rica

We stand beside the calm blue-gray water of the Golfo Dulce on the wild southwest corner of Costa Rica. The tranquil bay is actually a deep tropical fjord, a rarity on our planet, and is surrounded by lush rain forest, howling monkeys, and screeching Scarlet Macaws. 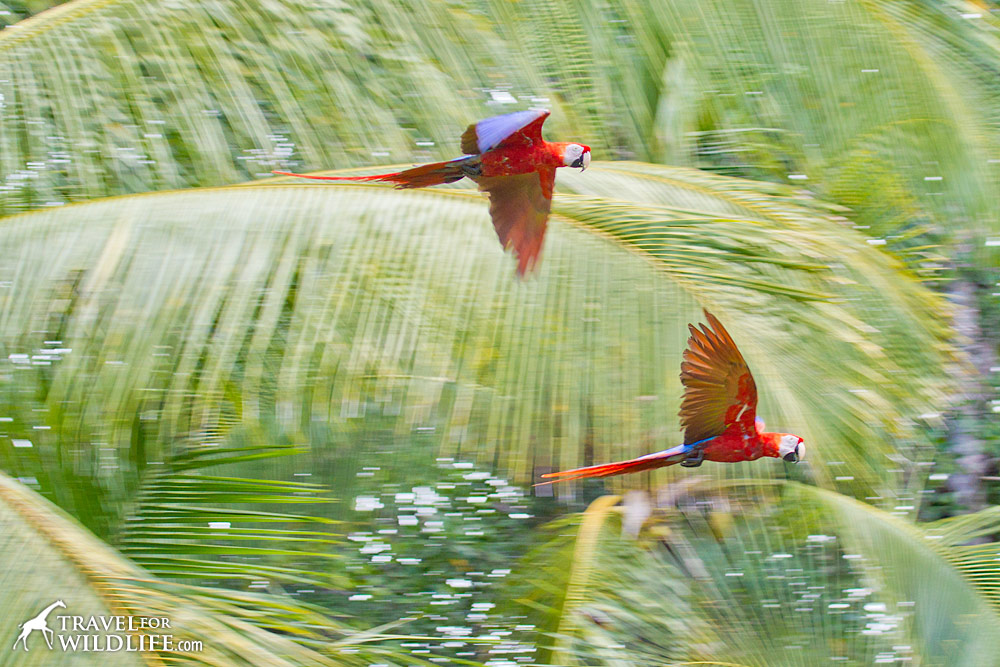 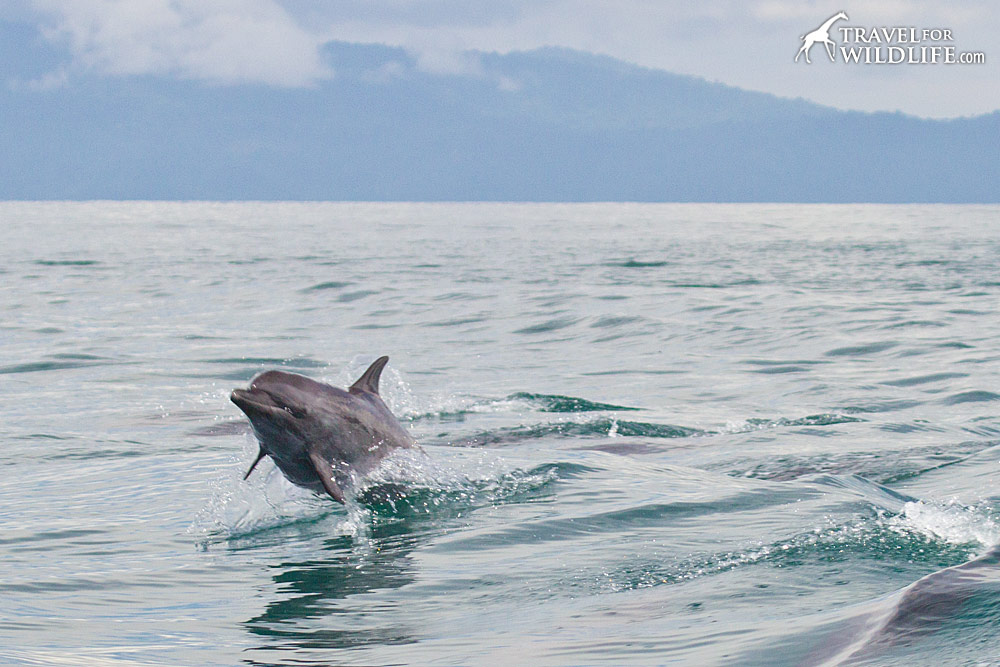 Pantropical Spotted Dolphins frolic in the waves of Golfo Dulce

But right now I’m only concerned with a single animal, the adult female Green Sea Turtle lying in front of me.

We’ve just finished taking measurements of her plastron (the bony plate that covers her chest) as well as the length of her tail and the distance from her plastron to her cloaca (the single multipurpose opening at the base of the tail used to excrete feces, urine and eggs.) 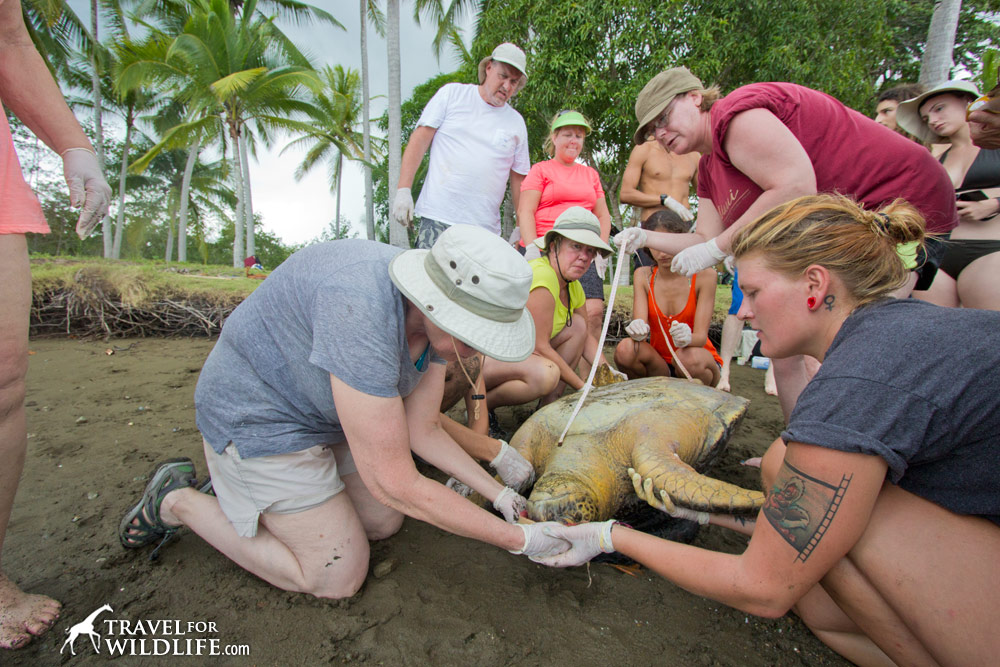 Measuring the plastron on a green turtle

She’s lying on her back on top of an old rubber tire which cradles her shell in the sand. She slowly opens and closes her beak-like mouth as she breathes and waves her flippers in the air. I’m sure it must seem an odd situation to her. She is probably far more nervous than I am.

A young blonde German woman looks up at me and says “Hold this bottom flipper tightly against her side when we turn her. This is very important. We don’t want to crush it.” She is a volunteer coordinator with LAST (Latin American Sea Turtle Association) and she smiles reassuringly at me, implying that she actually believes I can do this. She turns to another young woman crouching across the turtle from me. “You’ll be holding on to this top flipper while we turn her over. Try to hold it in place and keep her from flailing.” We both nod in agreement, trying to convey confidence. The others in the group are assigned various positions around the shell. “OK, one… two… THREE!” and suddenly we’re lifting.

It’s hard to grasp how large a sea turtle is until you try to pick one up. I do a lot of house remodeling so I’m used to lifting heavy things. A 50-pound bag of concrete can seem like a bit of a challenge. But an adult Green Sea Turtle can weigh six times that amount (300 to 400 pounds). To put this into perspective, this turtle could weigh about twice as much as I do. 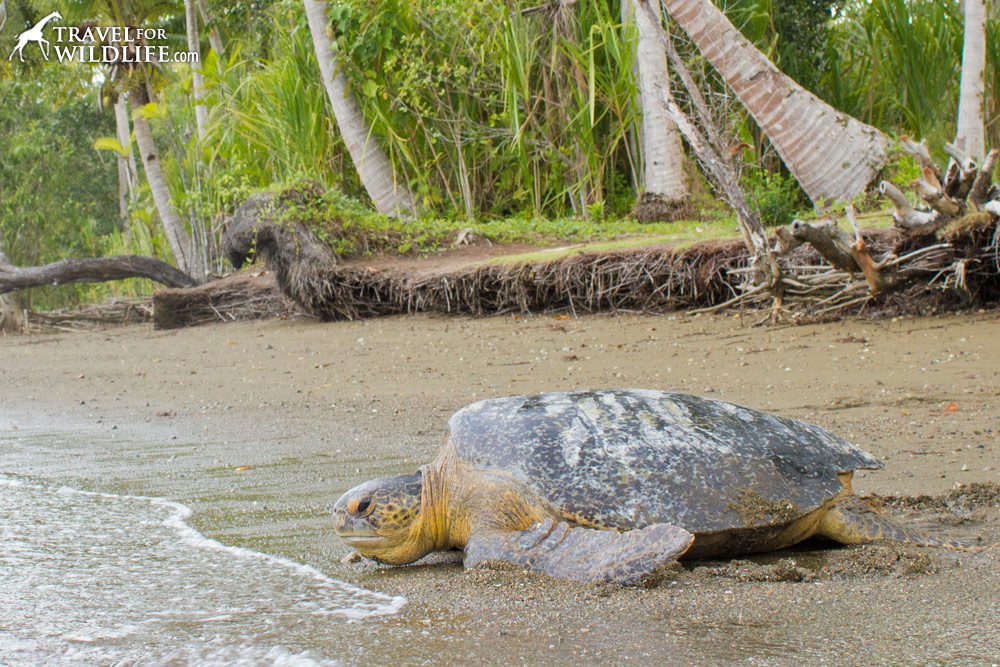 A Green Sea Turtle can weigh twice as much as I do!

I carefully but firmly hold the huge scaly flipper, folded tightly at the elbow, but this is no easy task. A sea turtle’s flipper is an extremely powerful appendage. It provides all of the propulsion needed to pull their massive bodies across thousands of miles of open ocean. The flipper is roughly the same size as a human arm, and even contains all the same bones, but the proportions are entirely different. Imagine your hand stretched out to five times its size, and then the rest of your arm (the humerus, radius and ulna) compressed down to less than half their length. Now cover the whole thing with a wide flat flap of scaly skin and put a small claw on the end of your thumb protruding out of the front edge. Add some powerful muscles and you’ll have a perfect sea turtle flipper. 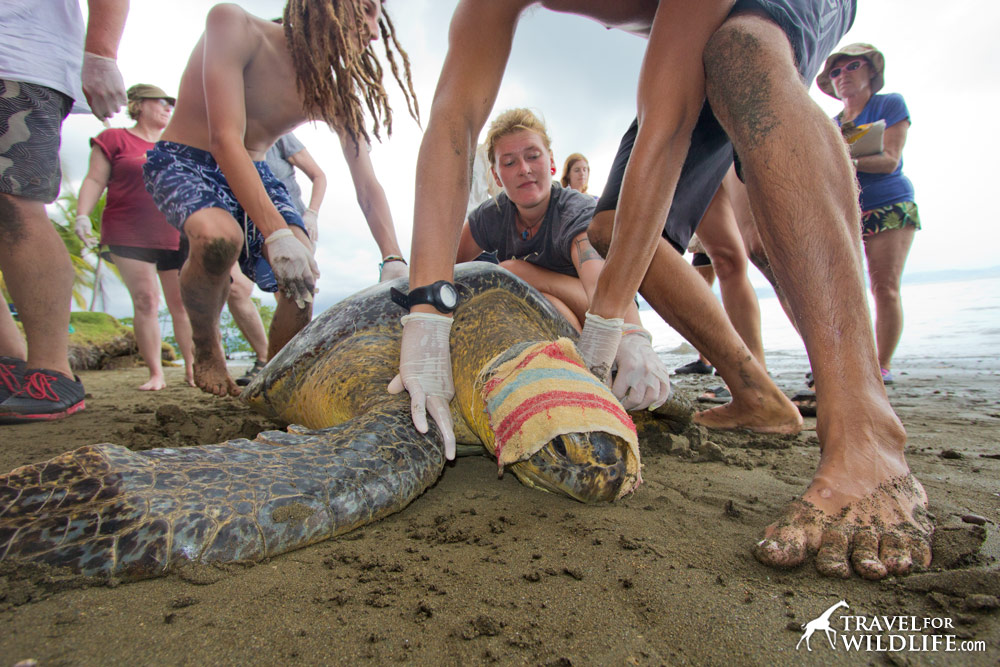 The powerful flipper of an adult green sea turtle. Check out those finger bones!

Things are going well and I manage to maneuver myself under the turtle and keep the flipper folded safely in place as we reach the danger zone, the half way point. Everyone is groaning and grunting under the strain as our guide calmly encourages us. That’s when the woman across from me loses her grip.

How did I get myself into this situation?

I was invited to join and document a special kind of tour group; one that endeavors to give travelers a chance to give something back to the wildlife and habitats they travel to see. Some call it voluntourism. I like to think of it as a conservation vacation. Whatever you call it, wildlife conservation travel is an up-and-coming segment in the world of adventure travel options. In the old days it was a challenge to find such obscure wildlife volunteering opportunities. But today, with the help of innovative organizations like SEE Turtles, it’s easier than ever. Although these trips travel to a wide variety of destinations such as Central America, Africa, Antarctica, and Asia, they all share a few common goals.

Keep in mind that this isn’t like volunteering at your local homeless shelter; you must actually pay to be this kind of volunteer. Remember, you are traveling with an organized and highly-specialized tour that plans and provides all your logistics for you: ground transportation, dining, lodging, and all the conservation activities that you’ll participate in. If you’re having a hard time wrapping your head around the idea of paying good money to be a volunteer, take heart in the fact that many of these tours are actually very reasonably priced considering what you get in return. Of course the real point of all this is that you are financially supporting conservation efforts that desperately need your funding to keep doing the important work they do. Add to that the fact that you can sometimes even be a useful member of their volunteer labor force doing real-world essential conservation work with your own hands. 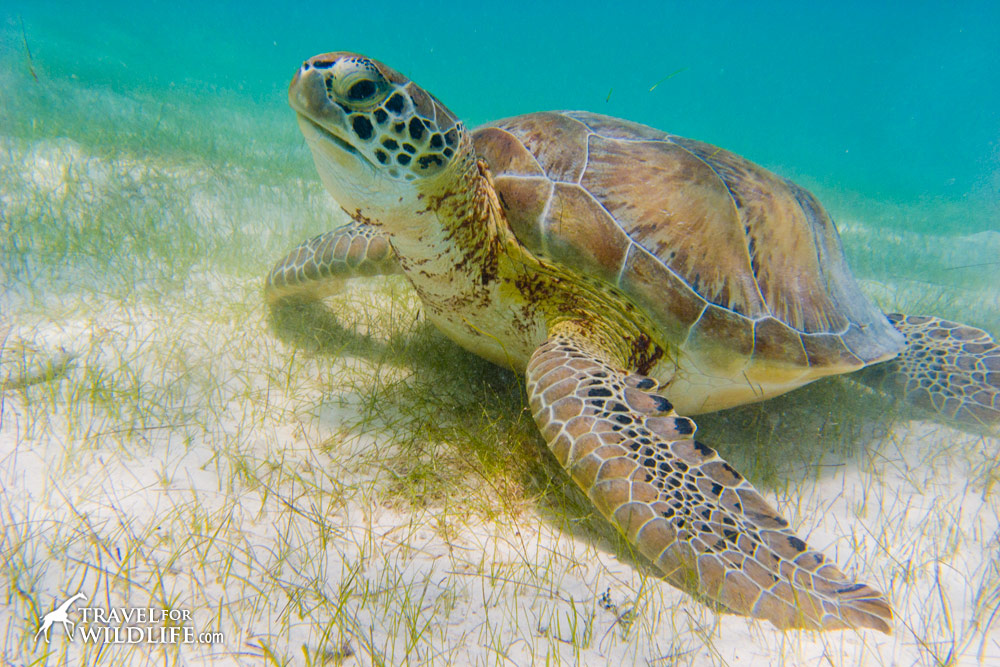 Wouldn’t it be nice if your vacation actually helped endangered animals like this Green Turtle?

In this case, my own hands were wrapped around the flipper of a sea turtle. The trip I joined, the Costa Rica Green Turtle Research tour, was focused on sea turtle and dolphin research, as well as mangrove restoration, in the Osa Peninsula of Costa Rica. Tomorrow morning we’d be packing plastic bags with sandy soil and planting huge mangrove seeds in them. The next day we’ll join a dolphin research boat and take notes on behaviors and locations around the bay. But today it’s all about sea turtles.

After arriving by boat along a remote beach, the coordinators stretched a long net across a shallow area of the gulf. 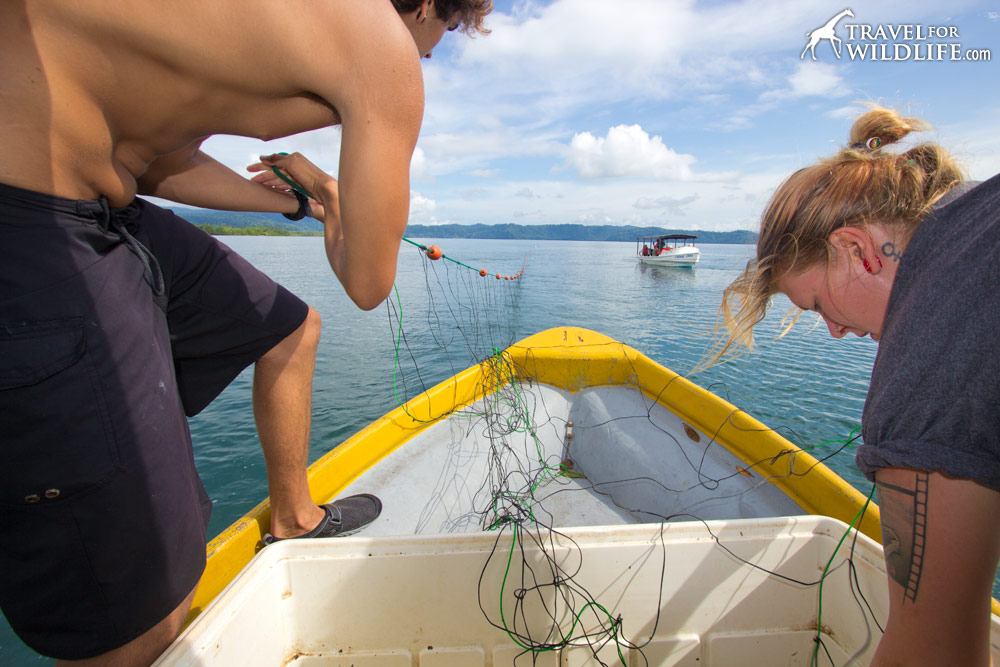 It hung by small floats from the surface down to about eight feet below. Then we waited and watched. Within minutes, a float started bobbing up and down. We had our first turtle, an adult female Green Turtle. As photographer of the trip I was permitted to enter the water and photograph it from below. I admit it didn’t look terribly pleasant for the turtle tangled in the net, but the researchers quickly freed it and pulled it aboard their small boat. 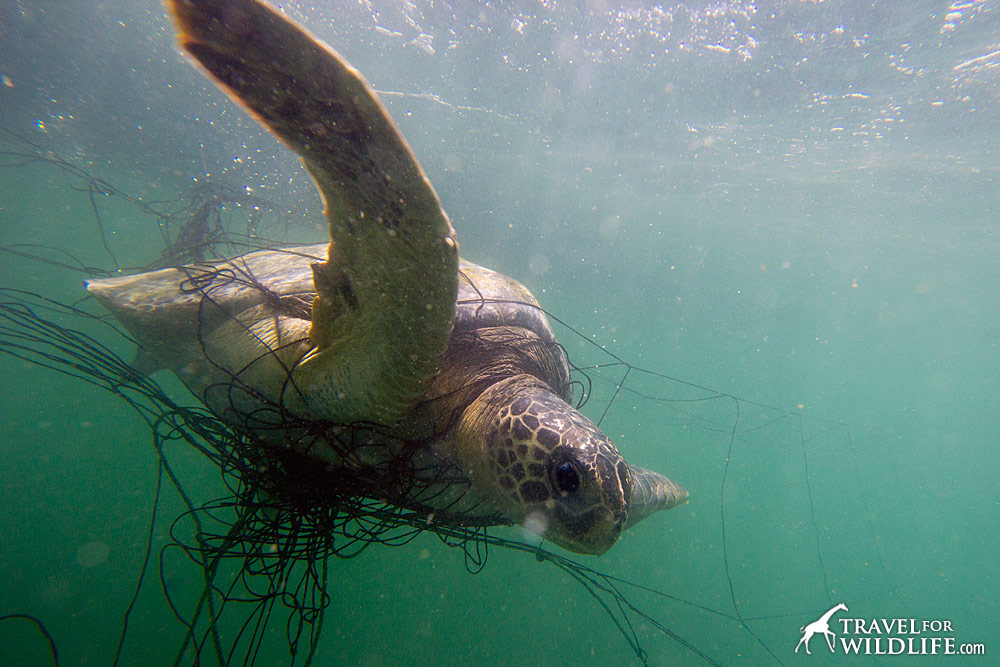 From there it was ferried to shore and a group of volunteers carefully carried it to the sand where a tire was placed to safely support its weight.

Next, researches took a DNA sample with a tiny clip of skin from the back flipper, then placed a numbered metal tag on the trailing edge of the front flipper for future identification. 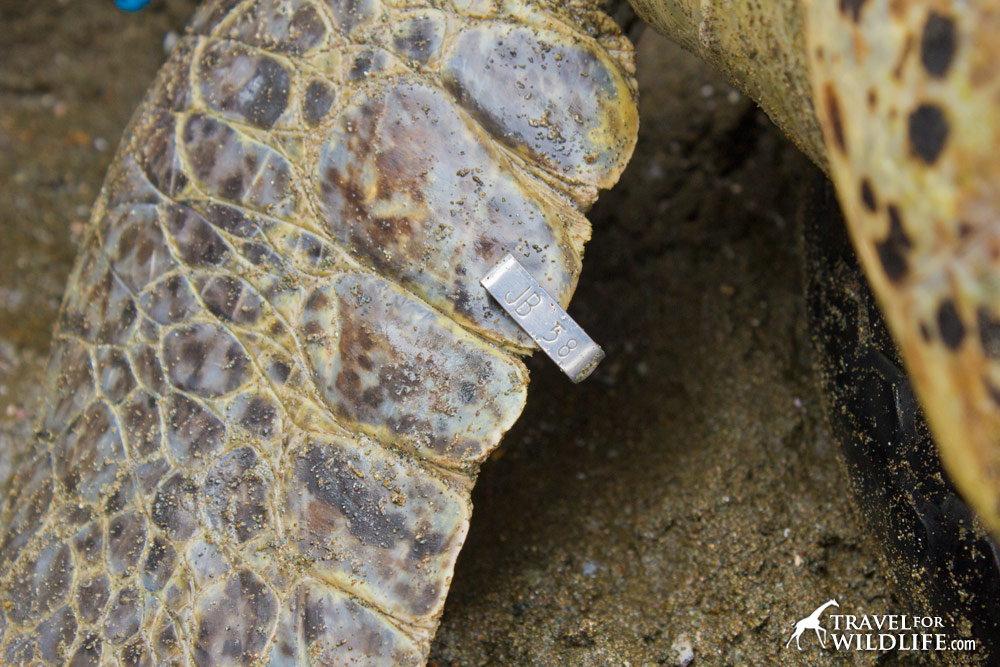 an ID tag on the flipper of a Green Turtle

We took measurements, first on top, then on the bottom. Then it was time to flip her back over. Which brings us back to where we left off: the woman across from me loses her grip on the top flipper.

Like lightning, that magnificent flipper flies from her hands and whacks me right across the neck and jaw. My chin stings as if I’d been karate chopped by a Teenage Mutant Ninja Turtle, but I never let go of that bottom flipper. We successfully lay her back down on her belly and step away. I rub my sore jaw and smile to myself as she slowly heaves herself across the sand and back to the sea. When the waves wash over her, she paddles away without looking back. 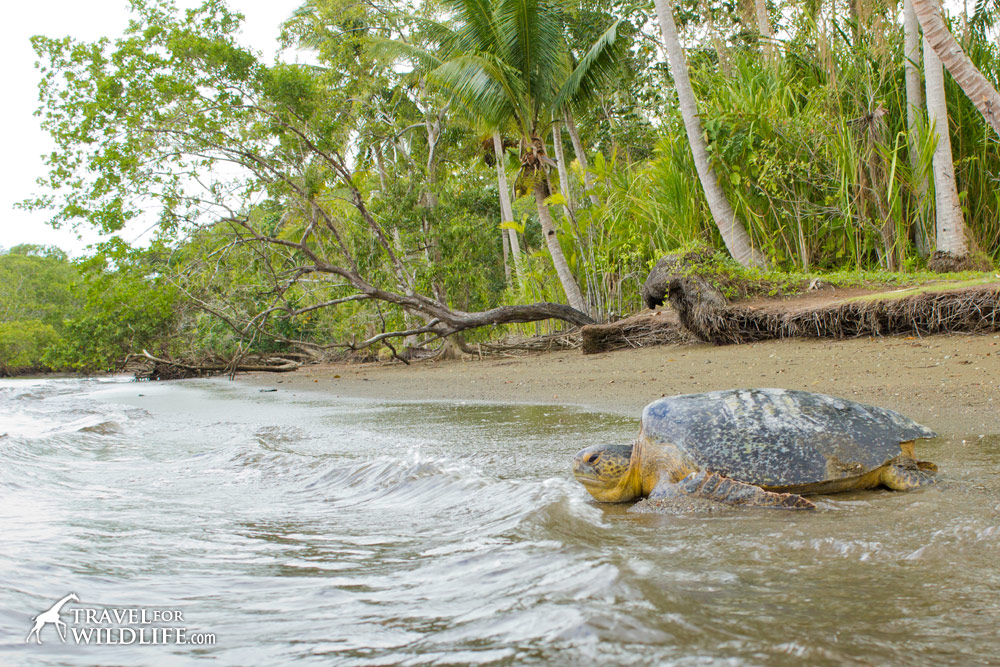 A Green Sea Turtle heads back to sea in the Golfo Dulce, Costa Rica

To learn more about the conservation work performed by Latin American Sea Turtles, visit LAST’s Osa Program or to search for your own rewarding conservation travel opportunity, visit SEE Turtles. 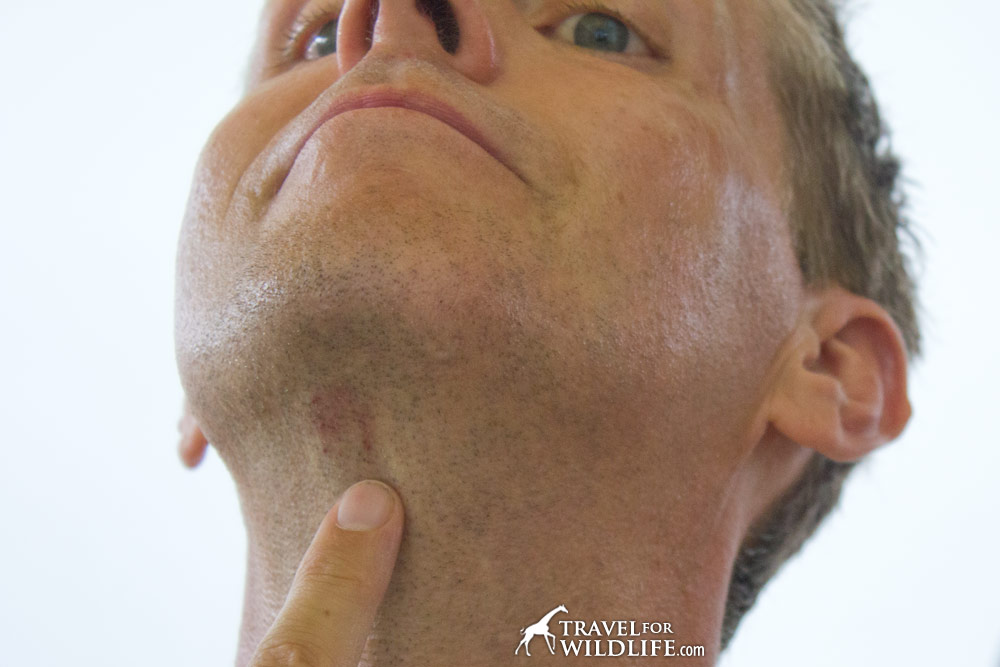 Where a sea turtle slapped me on the chin.