One of the most memorable moments of any safari is sitting around the campfire after a day full of great wildlife sightings. It’s the time when everybody grabs a drink and starts telling stories of their favorite adventures. Who doesn’t love a good campfire story? And wouldn’t you like to take all those stories back home so you can relive them over and over again? Now you can! Because that is what 101 Kruger Tales: Extraordinary stories from ordinary visitors to the Kruger National Park

is all about. It is a recollection of 101 amazing sightings and experiences by regular people like you and me, when they visited Kruger National Park in South Africa. And believe me when I use the word amazing. Some of them are incredible, some of them are sad, some of them are exhilarating, some of them are funny. The photos are pretty crazy too! One thing these stories have in common (apart from happening in Kruger) is that they’ll make you want to get on a plane and head to Kruger right now.

Some of the experiences in the book have changed people’s lives forever. And it is here where the stories get really personal. Some people have been flown all over the world to be interviewed, some people found love, and some people just got the fright of their lives.

This book shows that you don’t have to be a ranger or a biologist or a wildlife manager to have an unforgettable day. It doesn’t matter who you are. What does matter is that you are in the right place at the right time.

Here’s a look at some of my favorite stories:

This is what happened to the people who witnessed the now famous Battle at Kruger . They happened to be at the right place at the same time. I watched the video for the tenth time (at least) yesterday and my heart still races when I watch it. If you are not familiar with it (how could you not!), Battle at Kruger is an epic 8-minute film where a crocodile, a pride of lions, and a herd of buffalo fight for survival. If your heart doesn’t jump, even just once, there is definitely something wrong with you!

Of course, Battle at Kruger is one of the highlights of the Kruger Tales for me, as I remember seeing that video when it first came out a few years ago. I loved to read exactly what happened from the lucky people that witnessed it and how this sighting really changed their lives forever.

I couldn’t leave this one out as this is the story that Hal contributed to the book (and won us a free stay at a luxury lodge in Kruger!) His photo sequence of a leopard killing a crocodile did various rounds in newspapers, magazines, and television shows around the world. He was definitely in the right time at the right place and he didn’t even know what he was photographing at first! Apparently he just saw a speeding shape hit the water and started pressing the shutter like a maniac. It was only after a few moments that he realized what he was shooting: something that never before been documented on film.

I love to read his story over and over, not only because it is his story, but because it was this photograph that brought us together many years later (so nope, I am not the wife that was standing on top of the car, which by the way you shouldn’t do at Kruger!).

The Impala that Jumped Into a Car

That was a crazy moment, when a petrified impala was running and leaping for his life as a pair of cheetahs were chasing it. The only way out was through the open window of a car. So it jumped in! You can see in the video how the cheetahs were really confused as the impala “disappeared”. The people in the car had to open the opposite door to let the poor impala out!

You’ll see in the video how some people in the car are sitting outside their car windows. This is not allowed in Kruger. It is dangerous and irresponsible. Do NOT do it, you might get a fine or a hyena might bite you in your backside. But the video is fascinating to watch and the story is pretty crazy.

The Tourists that Killed a Leopard

When we are in a National Park we have to be aware of our surroundings. And also aware that we are in somebody else’s home. This is the home of thousands of animals that are just going about their lives and trying to survive. When we put ourselves and our desire to get THE photo first, without thinking twice about the consequences, it can be fatal.

This is what happened in one story. Reading it left me so sad that I hat to put the book down for a while. To cut the story short, a leopard was hanging around one of the gates and the fence was electrified. A bunch of cars appeared full of photo hungry tourists, the leopard felt cornered and he made a bad decision. He tried to jump the fence. He got tangled and died right there, electrocuted, in front of everyone.

This episode has left a few people scarred for life. And this should be a lesson to all of us. Never corner an animal. Give them space. And if you can’t take your photo. So what? You are in one of the most beautiful places on Earth sharing the space with incredible animals. That should be enough, right?

Thank you Jeff for including this story. Let us all learn from it.
These are just some of my favorite stories, but you can’t miss the one where a lioness opens a car door (with people in it!) or the one where a hippo saves an impala from a crocodile’s jaws. 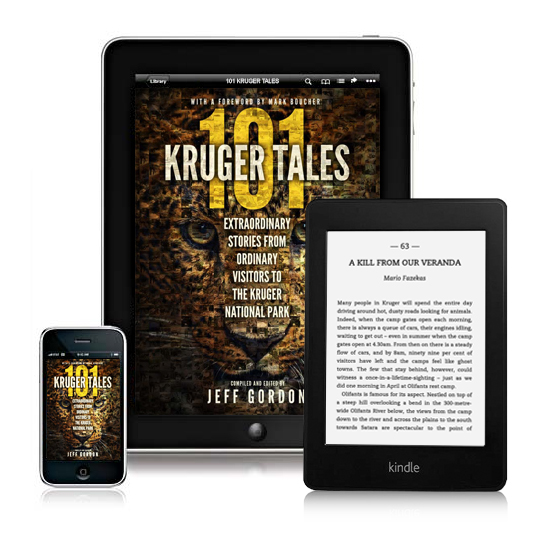 Note: When you get the book, take a look at the cover! The leopard face is actually a collage of all the photos that were submitted with the story. Stunning!