In my opinion, the Gemsbok (Oryx gazella) is one of the world’s most handsome antelope species. It is built like a horse, striped like a race car, has two incredibly long sharp horns like the one on a unicorn’s head, and its face is painted with a stunning black and white pattern. But its appearance is not the only thing that makes this creature special. The Gemsbok (also known as an Oryx) boasts a suite of impressive adaptations that allow it to live in some of the driest places on earth, specifically the Kalahari and Namib Deserts of Southern Africa. Read on to learn four fascinating facts about the Gemsbok.

The gemsbok is one of the most perfectly desert-adapted large mammals. It is capable of subsisting in waterless landscapes where few other ungulates can survive. This allows the gemsbok to utilize habitat that other grazers can only use during the rainy season. 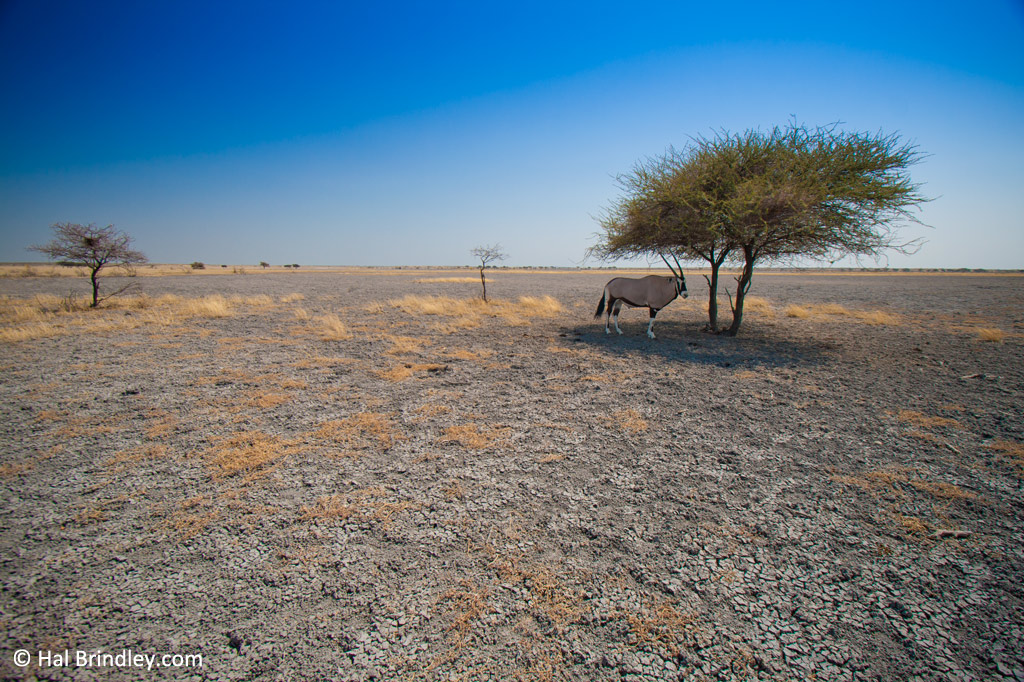 Gemsbok in the Central Kalahari

Morphologically, gemsbok are adapted to graze on short dry grasses. Their short faces with broad, high-crowned molars, wide incisor row, and narrow gape are specially designed for it. In dry spells, when grass is absent, they will turn to browsing for thick leaves which have a higher moisture content. This is quite unusual among ungulates to be both a grazer (grass-eater) and a browser (leaf & twig-eater).

Gemsbok need 3 liters of water per 100 kg of body weight per day. But the gemsbok’s great trick is that it doesn’t necessarily have to acquire this water by drinking. It is especially adept at extracting the moisture found in different fruits like cucumbers and wild melons, and in thick leaves. Juicy roots, tubers and bulbs are also a source of moisture which gemsbok dig out of the ground. And to top it off, they tend to graze in early morning or late evening when the grasses have the highest moisture content collected from dew. (Some plants increase their water content by 25 to 40 percent during these hours.) 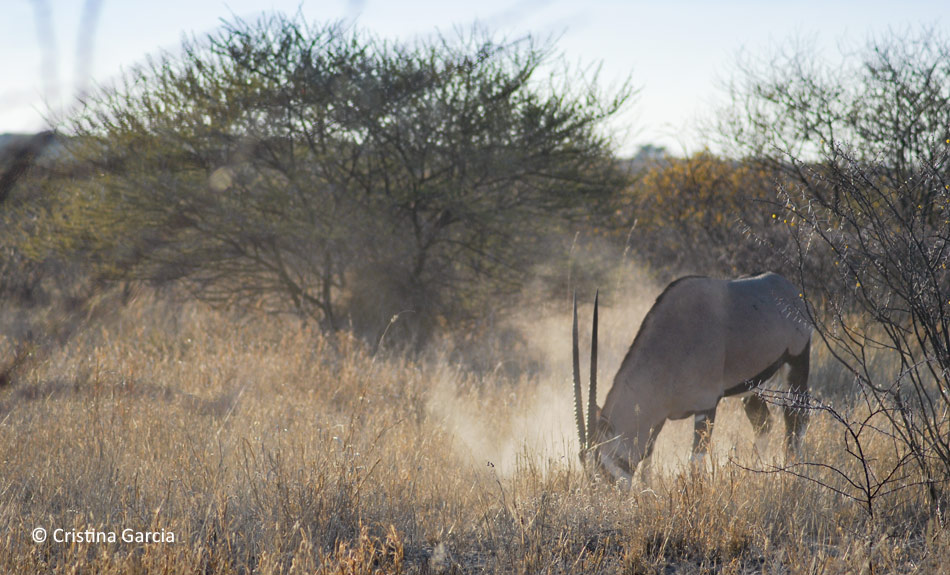 When deprived of drinking water, the gemsbok minimizes water needs by:

Male and female gemsbok present very low sexual dimorphism (physical difference between males and females) and are almost identical in appearance. This is most notable in the fact that both males and females have horns, though the male’s are a little bit shorter and thicker. Gemsbok are thought to have evolved this reduced sexual dimorphism to facilitate longer acceptance of juvenile males by the older territorial males. This has allowed them to better survive in vast empty spaces where finding mates can be a serious challenge. 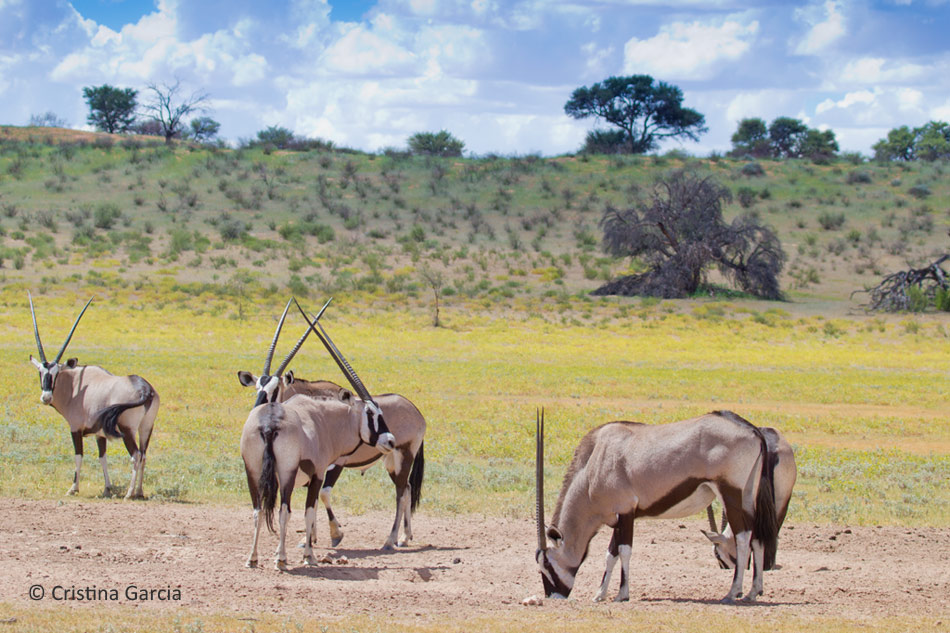 The social structure of the gemsbok sets them apart from most other antelope species. Other antelopes in the area, like springboks, employ a harem system where one dominant breeding male controls a group of females and young, and bachelor males form separate herds of their own. Gemsbok, on the other hand, form mixed herds of both males and females. The male rank within these groups is maintained with sparring contests that may escalate into fights. These fights are most likely to start due to competition for resources, such as a female in estrus or a water hole.

We took this is a video of Gemsbok fighting in the Kalahari, South Africa. 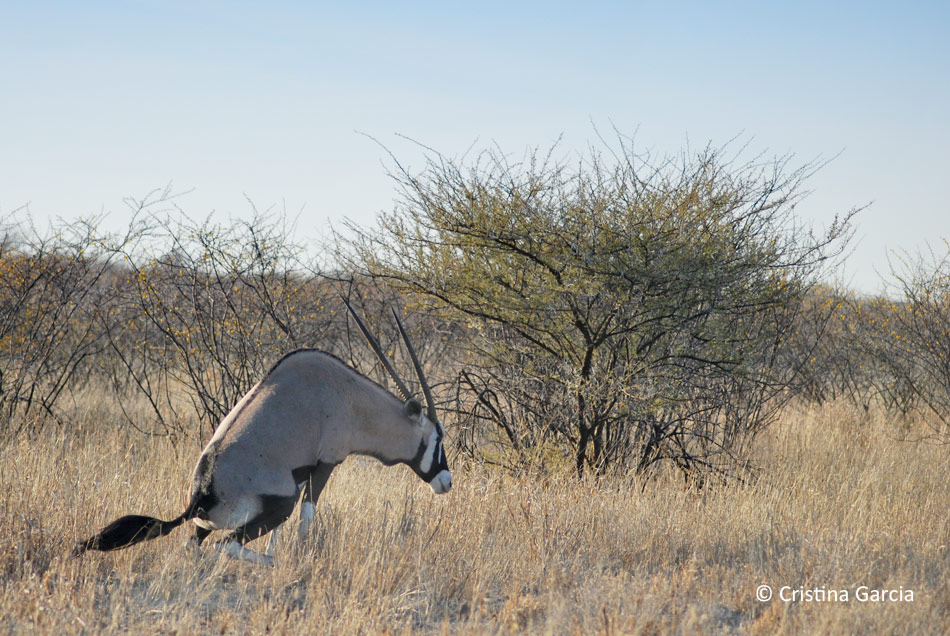 Gemsbok cows isolate themselves from the herd before calving. After giving birth, a mother gemsbok hides her calf  for about 3 to 6 weeks. This is quite different from most antelope species whose young travel with the herd almost immediately. The gemsbok mother remains within sight of her concealed offspring and visits them a few times a day to nurse. Newborn gemsboks are colored in an inconspicuous brown, blending with their environment. Their black and white face marking won’t appear until it is ready to join the herd with the mother. It will continue suckling until it is 6 to 9 months old. 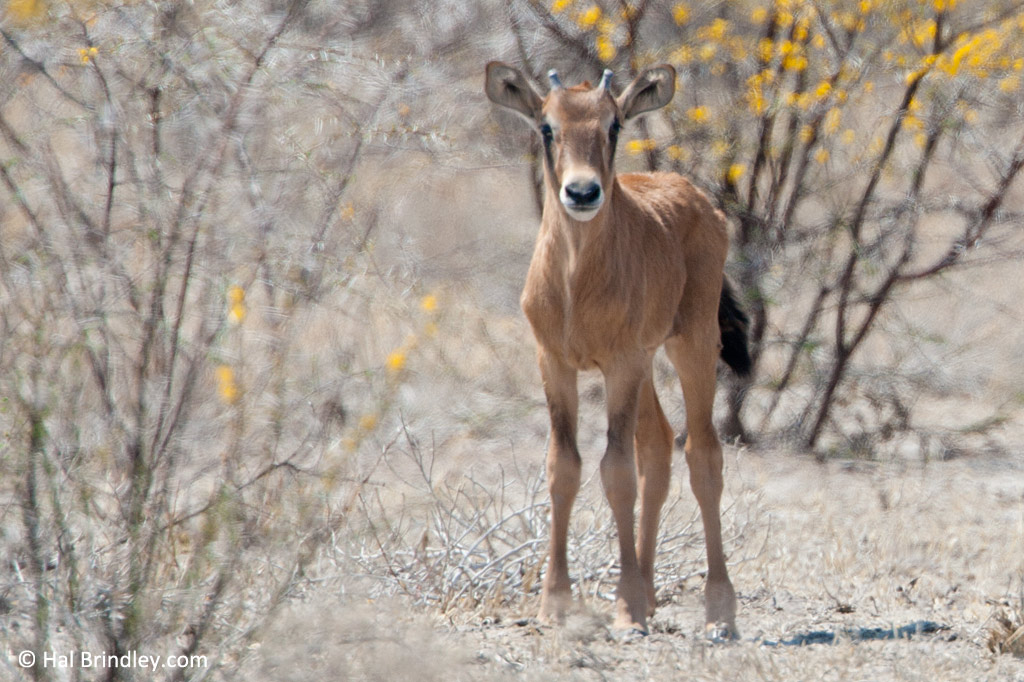 Where to see Gemsbok

Want to see Gemsbok in the wild? Our favorite place is the Kgalagadi Transfrontier Park in South Africa and Botswana.

These are a few reasons why the Gemsbok is the king of the Kalahari antelopes. Can you think of any more reasons that set them apart? Let us know in the comments below!

Enjoy this article? Pin this image! 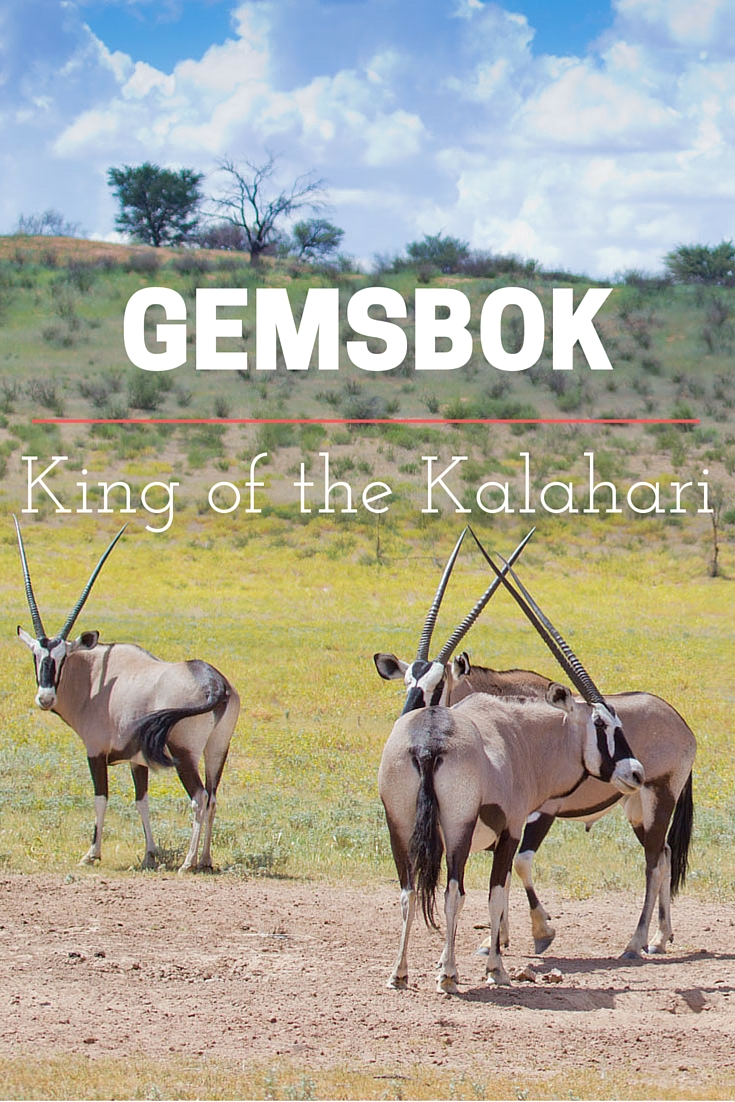