Cooking For Conservation: Chadian Food and the Restoration of Zakouma NP 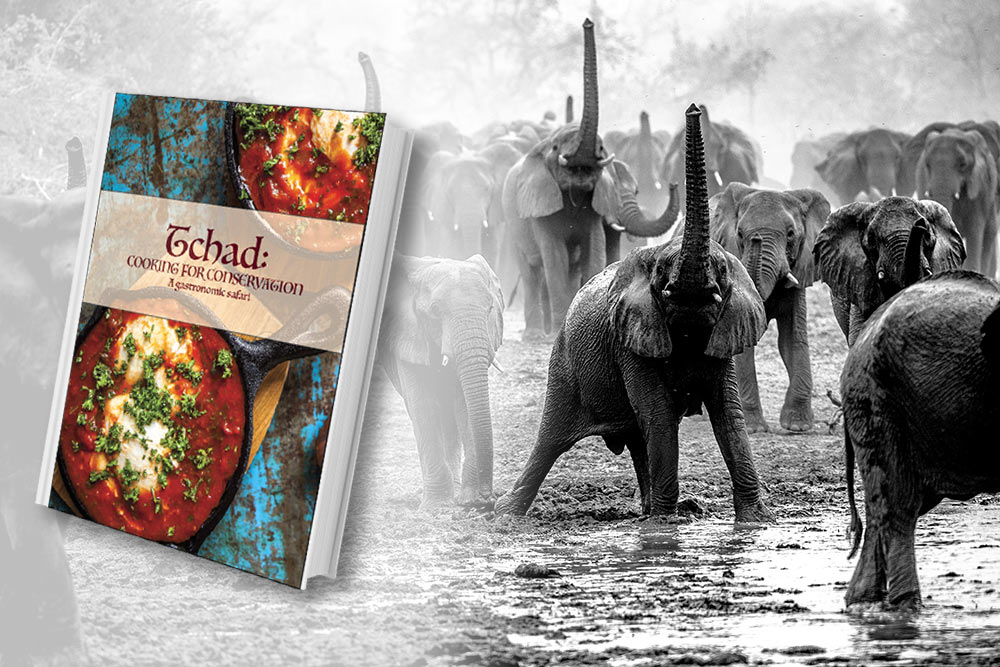 They say that food brings people together. But it’s not often that food brings people and wildlife conservation together. Jamie Sparks moved to Chad in 2015 to be a consultant chef for a luxury camp in Zakouma National Park, one of the most intriguing National Parks in Africa. The following year she became the camp’s manager. It was during her years living in a tent surrounded by predators that she learned about Chadian food and came up with her grand idea. She would write a book, half adventure travelogue, and half Chadian food cookbook, including 80+ recipes and stories from her time in the bush. Cooking for Conservation was born. She became so enamored with Zakouma, its animals, and its people that she decided to donate $100,000 of the book’s proceeds to African Parks, the non-profit conservation organization who manages the park (and other national parks all across Africa). African Parks successfully brought the once-decimated Zakouma back from the ashes, restoring not only the land and the wildlife but also providing a livelihood for the locals. (After her Kickstarter project was funded, the book will be available soon) 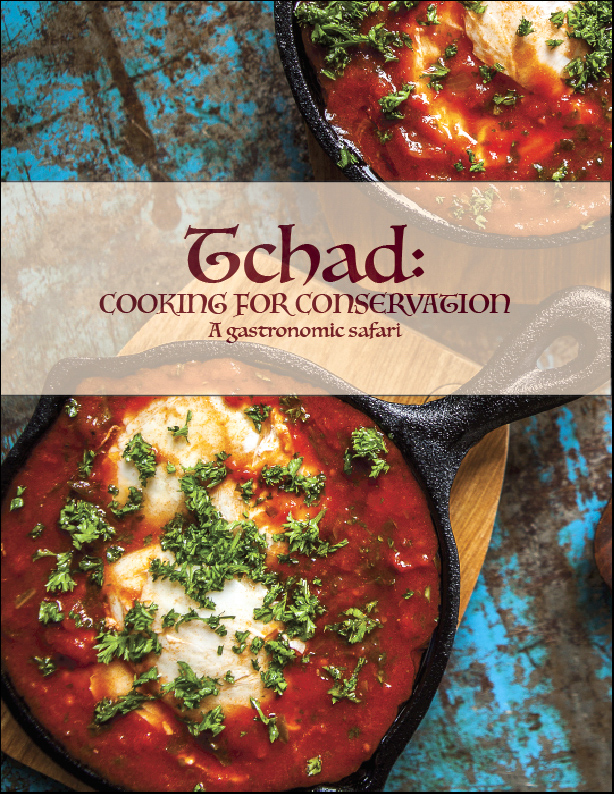 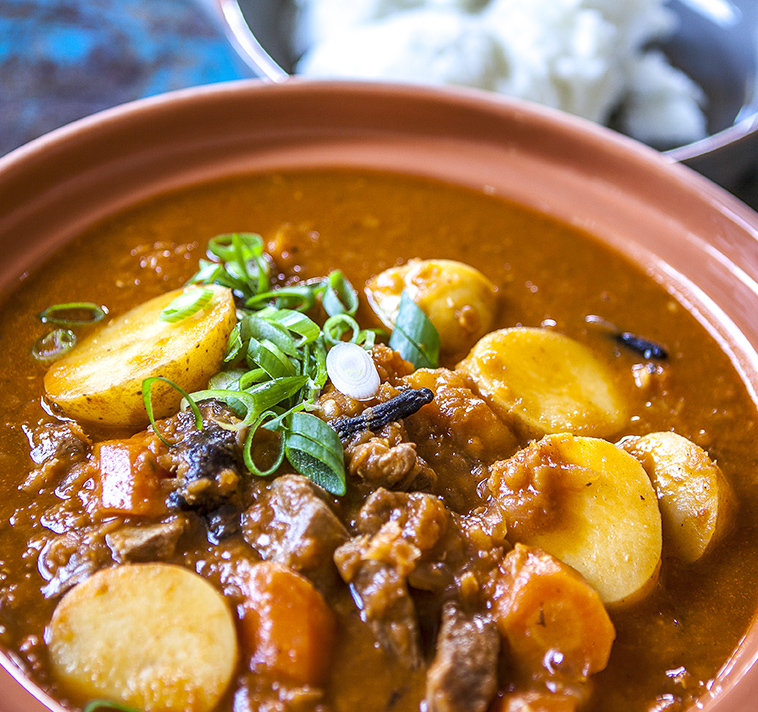 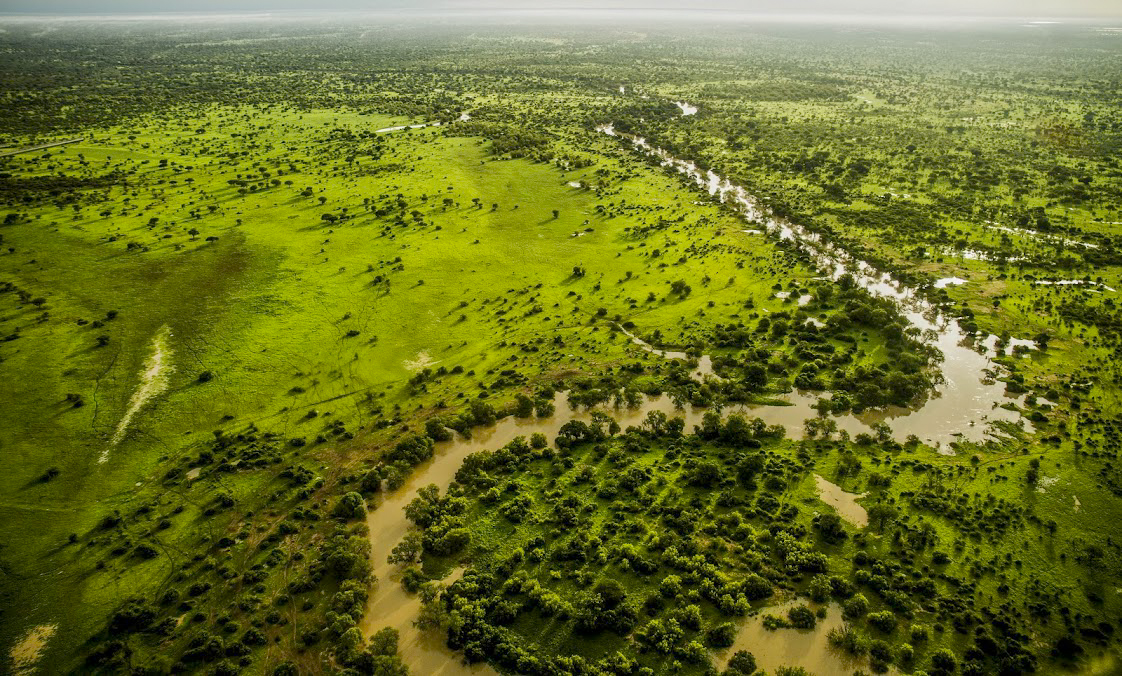 Jamie was happy to answer some questions about her upcoming book and her time in Chad.

Q. How did you end up in Chad?

Like most people, Chad wasn’t on my radar as a travel destination! In 2011, I was working on a yacht in Italy and my roommate, Jean Labuschagne, was born and had grown up in multiple countries on the African continent. She told me incredible stories of the bush and her childhood. Her parents are conservationists and every six or so years they would move to another reserve. She managed to paint pictures in my mind of open plains in Tanzania, sparkling waters of Lake Malawi, and thick acacia forests riddled with intimidating buffalo and majestic elephants in Chad. Africa starting calling me and managed to get under my skin before I had even set foot on the continent. In 2012, I planned a trip to South Africa to visit another friend and Jean, after seeing my Facebook post, said, “Come to Chad!” I didn’t even hesitate, my answer was “Yes!” 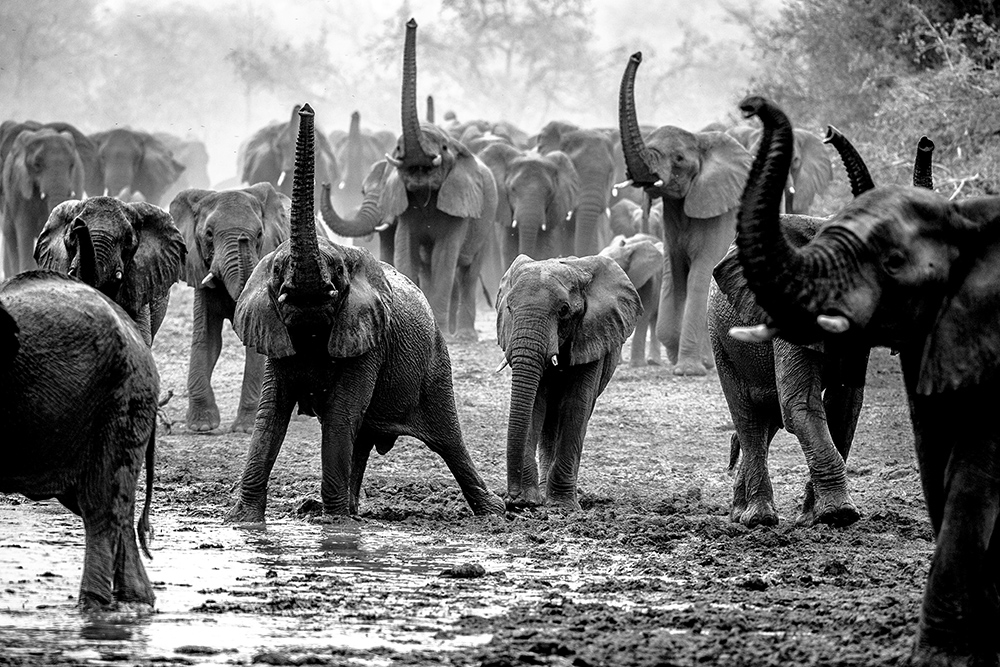 That first trip to Chad’s Zakouma National Park was an eye-opener for me. It was my first bush experience and I didn’t want to leave – in fact, I burst into tears on my flight from N’Djamena to Paris when they played “The Lion King” as in flight entertainment! Then, in 2014,  it was decided that Zakouma would be starting a high-end tented bush camp. The woman who was looking for a consultant chef for the project was having a hard time finding the right person (as you can imagine!), both Jean and her mother Lorna suggested she get in touch with me, to see if I was interested. I was so excited at the prospect of returning that there was no delay in sending off my resume – and I got the job! I helped open luxury Camp Nomade in 2015, implementing a menu and training a local chef. I returned as Camp Manager the following two seasons. 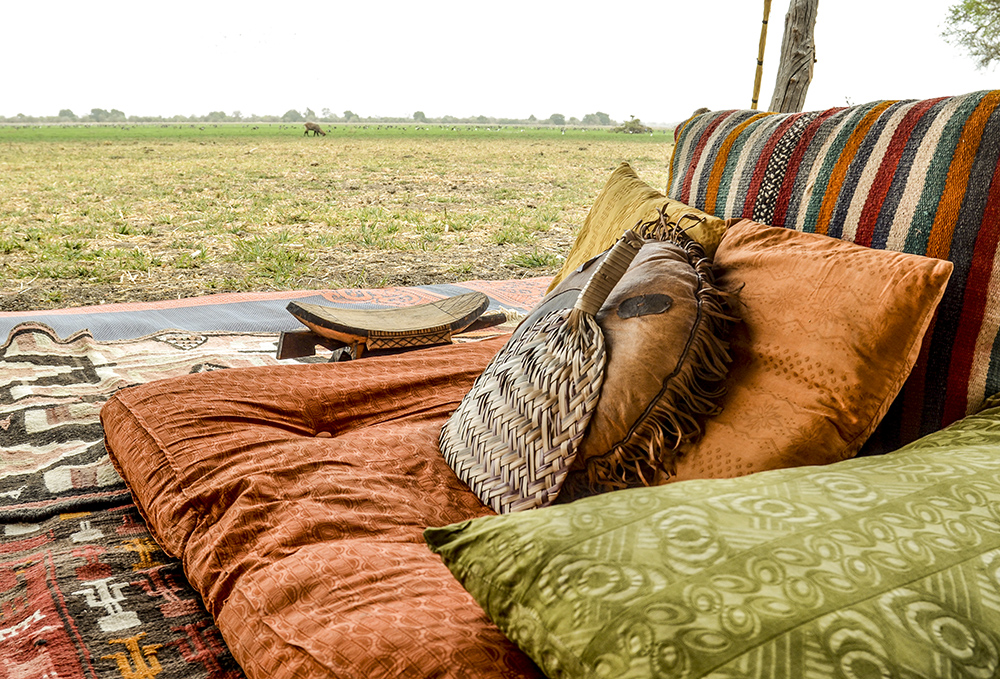 Q. Let’s talk about Zakouma. How would you describe living in one of the wildest national parks in Africa?

Wow, how much time do we have! There is so much that can be said about Zakouma, but I think one of my favorite things about that place is the lack of fences – animals travel freely in and out of the park and through the camps and headquarters. But it’s much more than that, the animals there seem different in some way to other parks that I’ve since traveled to. More than half of the year, they don’t see humans, so at the beginning of the dry season, they scatter when they see a vehicle. In many other places, lions are feared and buffalo are aggressive. At Zakouma the lions are inquisitive, but non-threatening and the buffalo behave more like skittish cows!

Living in a tent at camp for months at a time, the animals have a chance to get used to your presence. In 2017, it seemed I placed my tent in a thicket that the buffaloes also used as their sleeping quarters. Every morning I had to be on high alert for large snoozing animals as I walked from my tent to the mess area; more than once I got a fright when a buffalo jumped up from it’s relaxed position, snorting as it ran away! 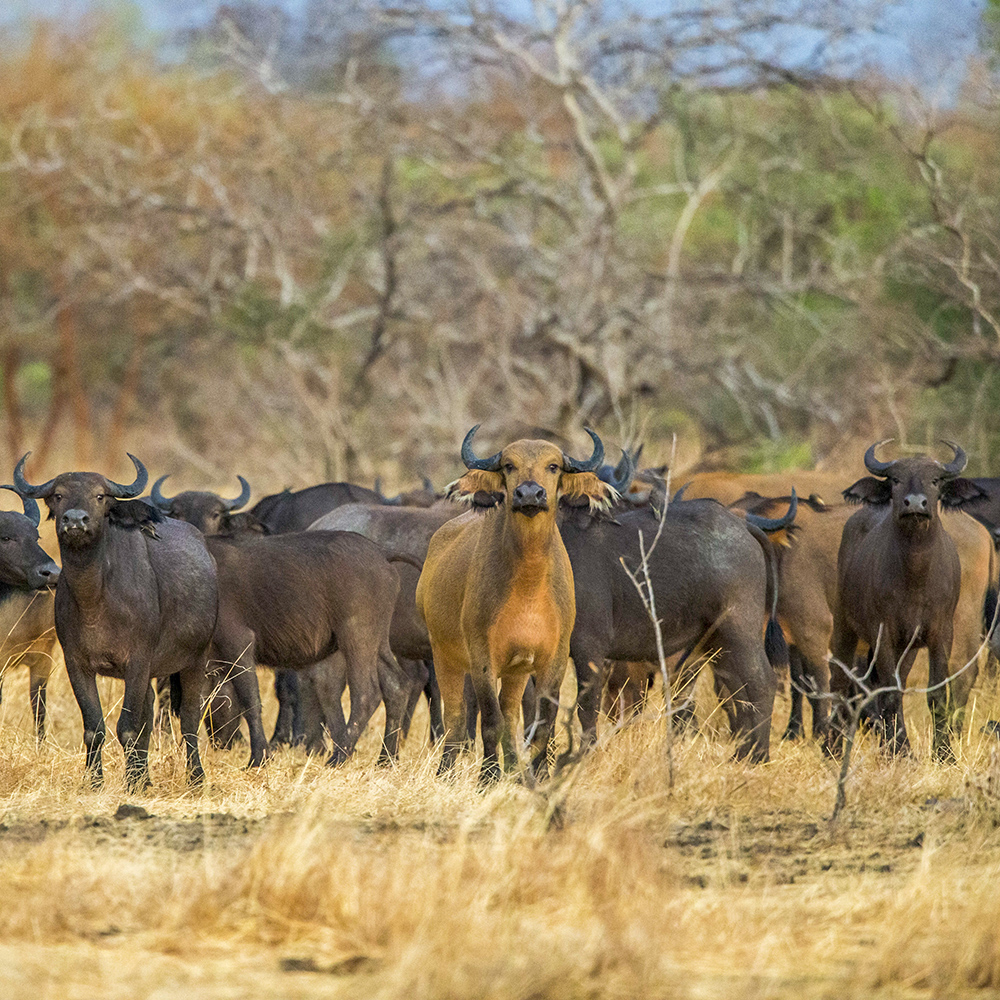 Buffaloes are a common sight in Zakouma @Michael Lorentz

Not only did the hoofed animals start to accept my presence but the cats did too. Multiple times I had lions visit my tent and, in one case, they tugged at the rope toggles, loosening them and slightly deflating my tent as I lay in bed frozen, wide-eyed, and trying to breath inaudibly! But the most special encounter I had with wildlife at Zakouma was at the end of my last season there. In the middle of the night, after returning from the bathroom, I was drifting back to sleep when I heard what I thought was a buffalo slowly plowing through the bush near my tent. It kept coming closer and closer, very slowly. Then, all of a sudden, it stopped and I heard a deep, raspy panting noise. I knew immediately that it wasn’t a buffalo. I grabbed my torch, flipped over onto my stomach and pressed my face up against the mosquito net. I wasn’t prepared for what I saw when I turned on the light; a leopard, standing over it’s kill, looked back at me from just six feet away from my pillow. I quickly turned off the light, expletives sounding in my head, and curled up in my bed as far away from the netting as I could get! To my astonishment, the next thing I heard was crunching of bones. Instead of moving off, she made himself comfortable and started eating her dinner right there by my bed! She was very relaxed and not bothered at all when I turned my torch back on and watched her. I observed her for an hour and a half before she moved off into the bush, just before the sun came up. Only when the euphoria wore off did I come to the realization that she had probably watched me walk to and from the bathroom not only that night, but many more before it. She brought his kill to my tent because she knew I wasn’t a threat; she knew me better than I knew her! 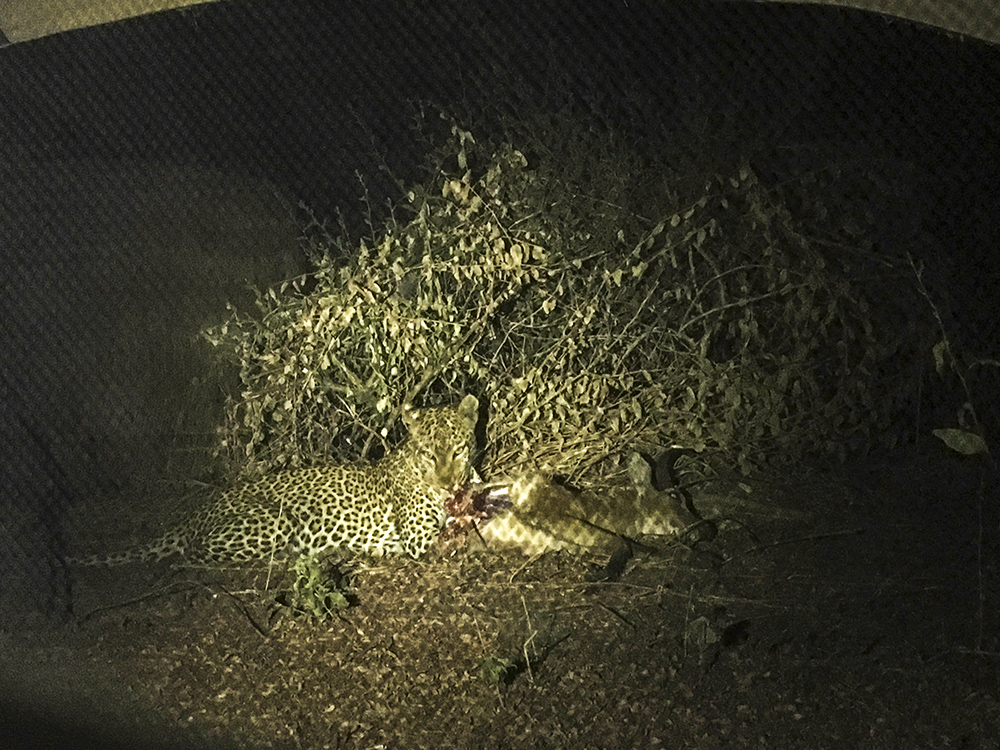 Q. What inspired you to write Cooking for Conservation?

When I was hired for the first season, I knew I wanted to write about my experiences and challenges while working in the bush. At that point, in my mind, the book was more of a memoir. Then, after spending evenings around the campfire listening to stories from African Parks team members and professional guides from around the continent, the idea evolved. I was entranced and inspired by these stories of perseverance and small (and large!) victories in the world of conservation. The real motivation behind the book came when I realized that it could do a lot of good, on top of being a destination cookbook. I decided to donated the proceeds of the book to African Parks – and I set the goal high: $100,000 from the profit of the book will be donated to African Parks and once that goal is reached, 25% of the profits will continue to flow to them thereafter.

Q. Why did you choose to support African Parks with your book? How is Zakouma National Park benefiting from being managed by African Parks?

There are a lot of incredible organizations out there, doing a lot of good. I personally chose African Parks because after I worked with them, heard so many of their stories, watched how they operate, and saw how transparent they are, I have full confidence that every penny donated to them is used in the wisest and most efficient way possible. 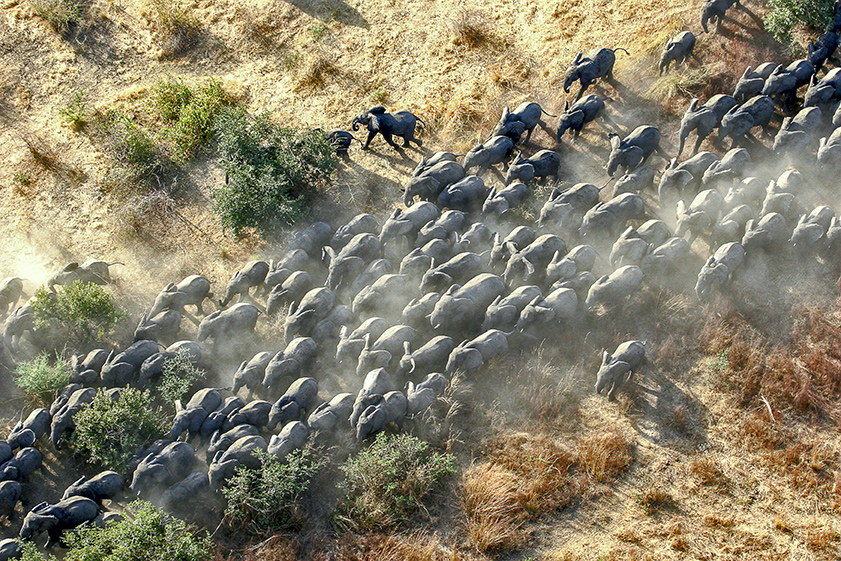 Zakouma elephant population is on the rise @Jean Labuschagne

Since African Parks took over management of Zakouma, they have halted elephant poaching that had previously devastated the population. From 2002 to 2010 they had lost 90% of their elephants to ivory-seeking poachers from Sudan and CAR. It wasn’t pretty. Park management and workers would basically abandon the park during the rainy season, leaving the poachers freedom to roam and hunt as they pleased. After eight years of effective park management with African Parks, the herd is breeding again and numbers of all animals are on the rise; more than half the continents Kordofan giraffe are found at Zakouma, their numbers now over one thousand. But it’s not just the animals that are benefiting from proper park management. The surrounding communities now have schools, wells, access to medical help, and African Parks is the largest employer in the region. 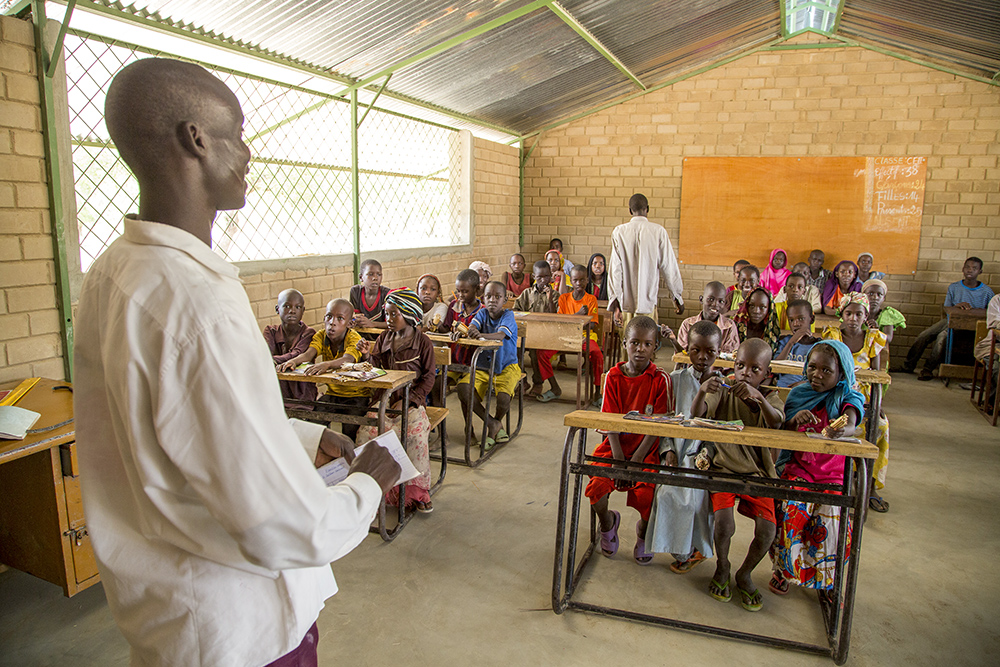 The communities also find the area more secure under African Parks management. Zakouma has supplied these communities with radios, which they can use to call headquarters if there are unwanted or suspicious characters that enter their villages. This is beneficial for both parties and is Zakouma’s first line of defense against poachers. 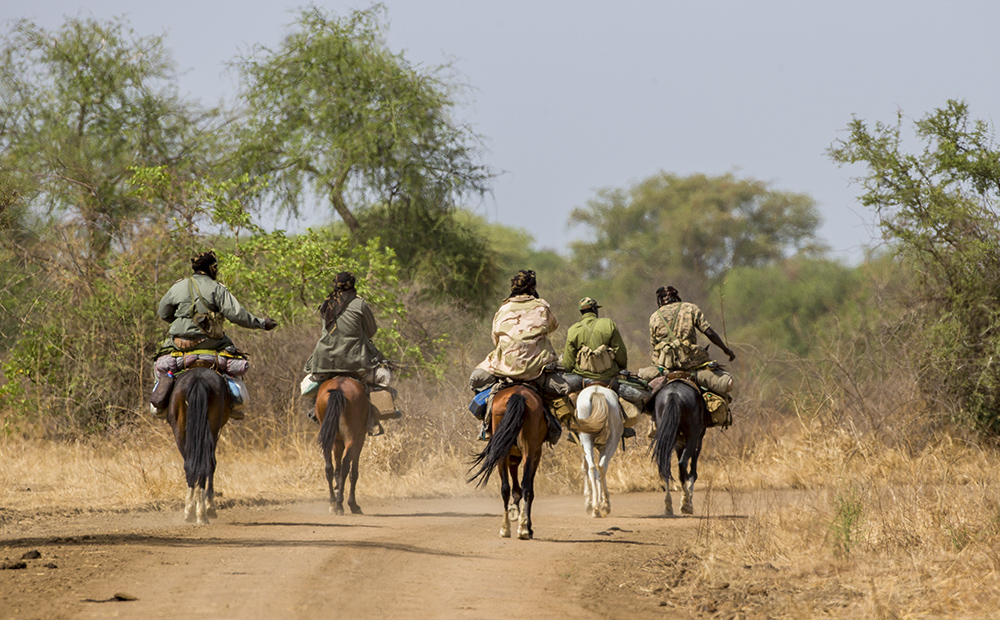 Q. How would you describe Chadian food? What do you enjoy most about it?

I read an article years ago about a study done by University of Cambridge, stating that Chadians actually have one of the healthiest diets in the world. They eat fresh meats, fruits, vegetables, and grains – very little, if any, processed food (especially in rural areas). Chadian food is very simple with staples like mutton, okra, bitter greens, sorghum, and maize. One of their classic dishes is called “Daraba”. In Chad, like most African countries, they cook the maize (or sorghum) flour with water until it forms a hard lump. This is then served with a stew or sauce and people crouch around a large platter, eating with their (very clean!) right hands. Aside from spice hunting through the dusty stalls at the local market, the ritual of eating with the locals was my favorite part. Everyone crowded around a single platter, crouched but not sitting, and eating with their hands. No matter what, you always get an invite to join. Even if there is not much food, there is always enough. 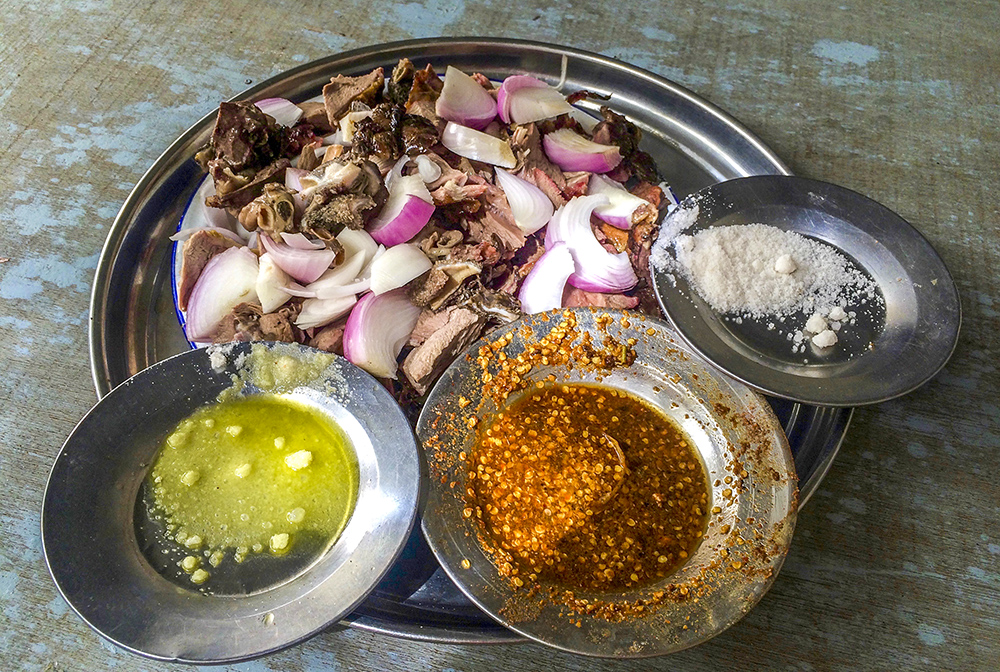 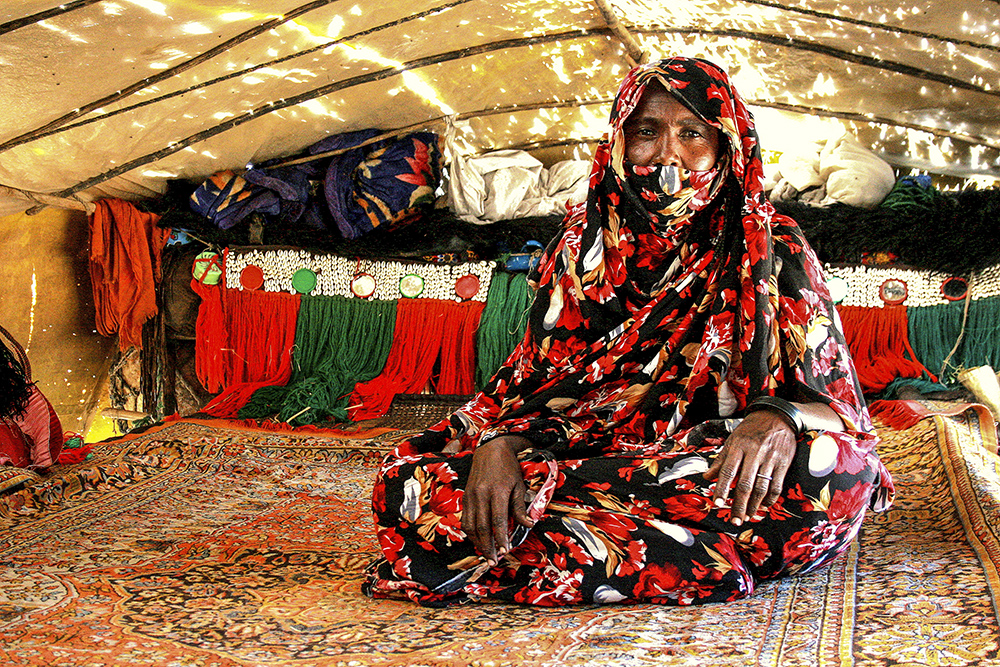 When planning the menu for Camp Nomade, I was asked to incorporate flavors from Chad, Morocco, and Lybia. The result is an eclectic menu using the spices of the region, western cooking techniques, and a few local dishes – though slightly altered. Very fun! 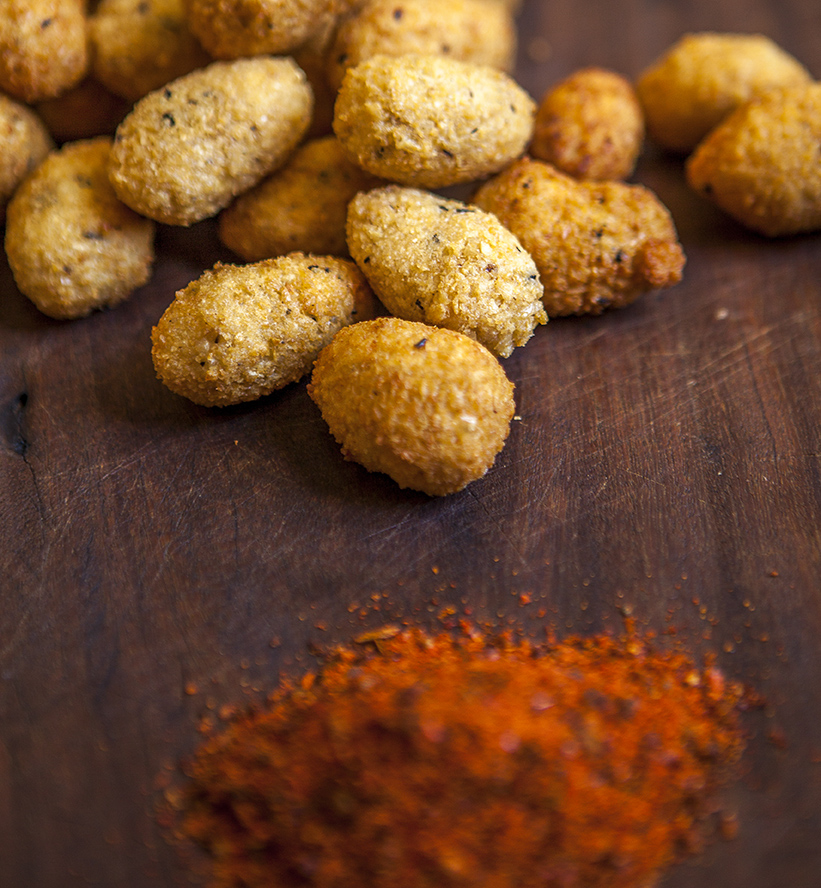 Spices have a great role in Chadian food @Jamie Sparks

Q. What are your future plans?

You know, I’ve been thinking a lot about that recently and the more I think about it, the more I feel inspired to complete more “Cooking for Conservation” cookbooks. Who knows? Maybe a whole series of books from different African countries – with the profits donated to help organizations in their efforts to protect these wild and sacred places. Sounds like fun – with a cause!