Breaking My Wolf Curse In Yellowstone 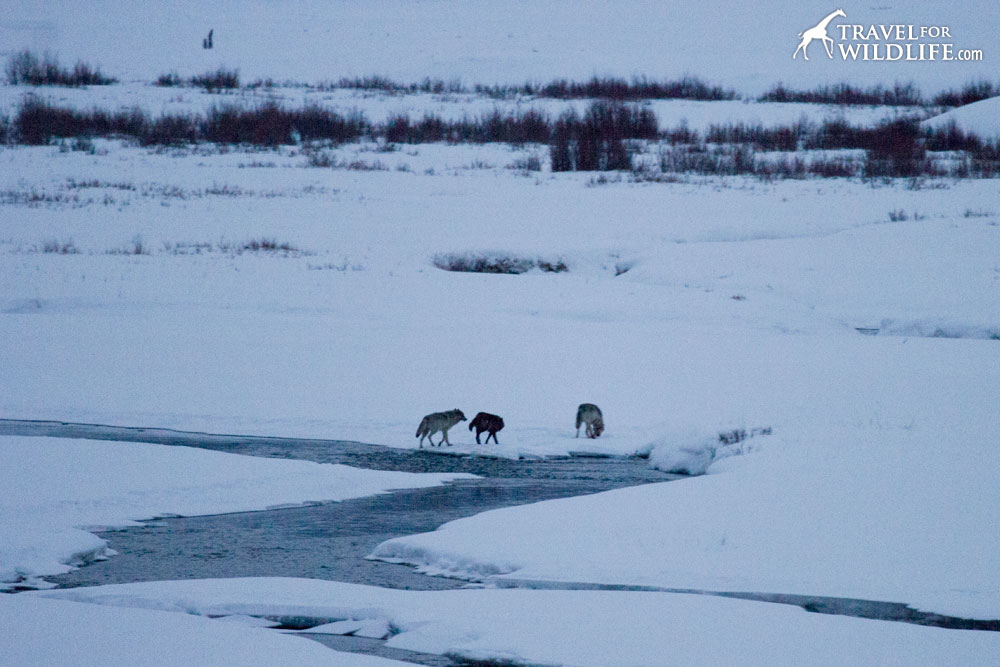 When I woke up this morning I had never seen a wolf in the wild.

While this is true for almost everyone on the planet, the fact that I’d never seen one had been bugging me for years. I’ve been wolf-obsessed forever. In fact, wolves were the only reason I became a zoologist. All I wanted to do with my life was to become a wolf biologist. By the time I started university I had all the wolf books I could find and I had read all the research papers available. But no matter how hard I tried, I always failed at seeing one. Some of the things I’ve done to see a wolf:

I had a wolf curse. Until today.

Hal wanted to help me break my wolf curse, so when I turned 40 last month he made sure I would have a memorable birthday. He bought us tickets to fly to Yellowstone to search for wolves in the winter.

So we did. But our first full day in the park passed without seeing a wolf. We woke up extra early this morning, determined that today would be the day, having no idea that within an hour we would be watching the most famous wolves in the world. Today I had the privilege of watching the Lamar Canyon wolf pack of Yellowstone. Someone pinch me. I will remember this date forever.

We saw a wolf pack!

It all started very early. It was 5:45 am, an hour and a half before sunrise, when Hal and I woke up and got into our car in freezing temperatures. An hour later we were pulling into the Lamar River trail head pull out. It was pitch black and we were the first ones to arrive (we are always proud of ourselves when we are the first on the scene). It was about 10F (-12C) and we were standing on the crunchy snow, staring out into the dark and waiting for the light of dawn to appear. I started to walk up and down the pullout to warm up, waiting impatiently. 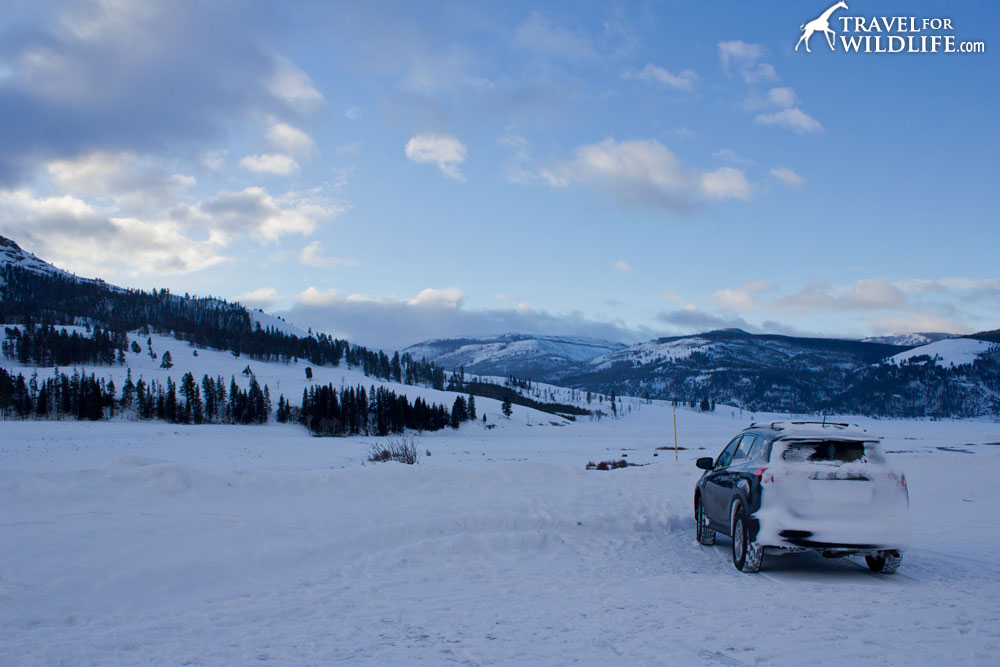 Then the headlights of another car appeared. It was Rick, one of the Yellowstone wolf researchers. He had his radio tracking device with him and he told us that the wolves were around. But where? It is illegal to use a spotlight in Yellowstone so we needed patience. Rick got in the car to try from another pullout to see if he could get a better signal and could locate them. I got in the car to warm up a little until I could see what was going on in the valley. Then Hal looked at me with wide eyes and signaled to me that I should listen. Then he did the same to Rick, who had already started the car and was about to leave. I got out of the car and I could hear it! The most beautiful animal sound you’ll ever hear.

Several wolves were howling down by the river, but we couldn’t make out how many as it was still too dark. Then another howl, this time a single howl coming from the hill in front of us. While the group howl was high pitched and fast this lone howl was deep, serene, and comforting as a cat’s purr.

I smiled. I was listening to the Lamar Canyon pack starting their day. I was a part of their day.

[box style=”quote”]Listen to them, the children of the night. What music they make!’,[/box]

It was magical. The howl went on for a very long minute.

Thinking back on different predator vocalizations I’ve heard in the night, I’m struck by the different feelings I felt depending on the animal. Hearing lions when camping in unfenced wilderness camps brings up a primal fear of being preyed on. My heart races and my eyes widen, I am all adrenaline. Same with hyenas. With wolves it is so different. Their howl is comforting and soothing. Beautiful and pure.

The whole pack was there, the alpha male (the one who was howling by himself, named 925) and female (named 926) and their five last year’s pups. They started going up the hill and at some point they disappeared into the forest. We were so excited we stayed for another hour and a half watching ducks, bison, bald eagles, moose, and a red fox pouncing on a rodent. By this point everybody else had left. If wolves are gone, people don’t hang around long in the cold Yellowstone air. 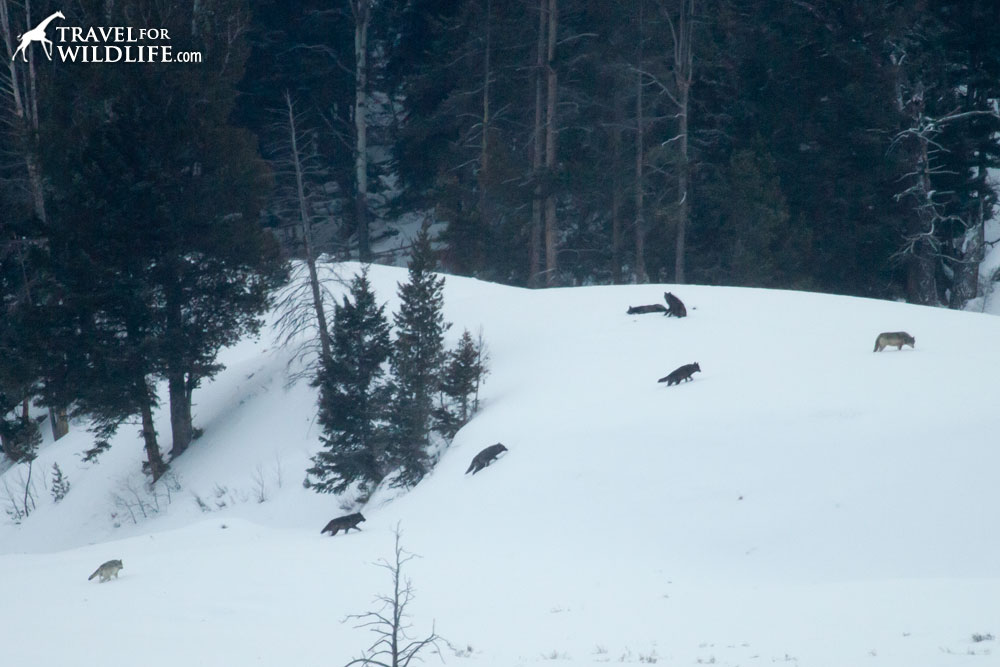 The seven members of the Lamar Canyon wolf pack

I looked up at the top of the hill in front of us where a big snowy field crowned the mountain across the valley. I could see a few bison, only big dark blobs from where we were standing. Then I realized a few smaller blobs were moving toward the bigger ones.

It was them! The Lamar Canyon pack had made their way up to the top of the hill and to our surprise they started messing with a bison. They surrounded the bison to check him out until he got tired of this game and turned around to face them (in bison language this is a “get lost!” sign). The wolves ran away comically in all directions. We could see that the alpha pair were the ones leading the action. We even saw how the alpha female took a nip at the bison’s butt!

The bison was having none of it and moved closer to some other bison. The wolves lost interest eventually and started playing with one another as puppies love to do.

In the video below you can see this interaction.

Did we witness hunting behavior? The zoologist in me wants to think so, but I don’t know. Apparently this wolf pack doesn’t hunt bison. The pups are too immature to hunt for an animal as big as a bison. Were the alpha pair teaching the pups how to hunt? Or were they just playing? A few hours later we had an unexpected possible insight into this behavior.

Just outside the North East entrance to Yellowstone, there’s a tiny town that we love called Silver Gate. Follow the road up another three miles and you’ll get to Cooke City which is where we were staying. Someone told us there was a resident bison, which the locals called Jackson. We’d been seeing him everyday in one of the fields, plowing snow and grazing. Today he wasn’t alone. A neighborhood dog was sitting next to him. Suddenly the dog started barking at him and jumping around in a playful manner. He was behaving in a similar way to the wolves we had watched earlier. Every once in a while, Jackson would turn annoyed and the husky dog would run away terrified, just like the wolves. It is so interesting how similar wolves and dogs are! 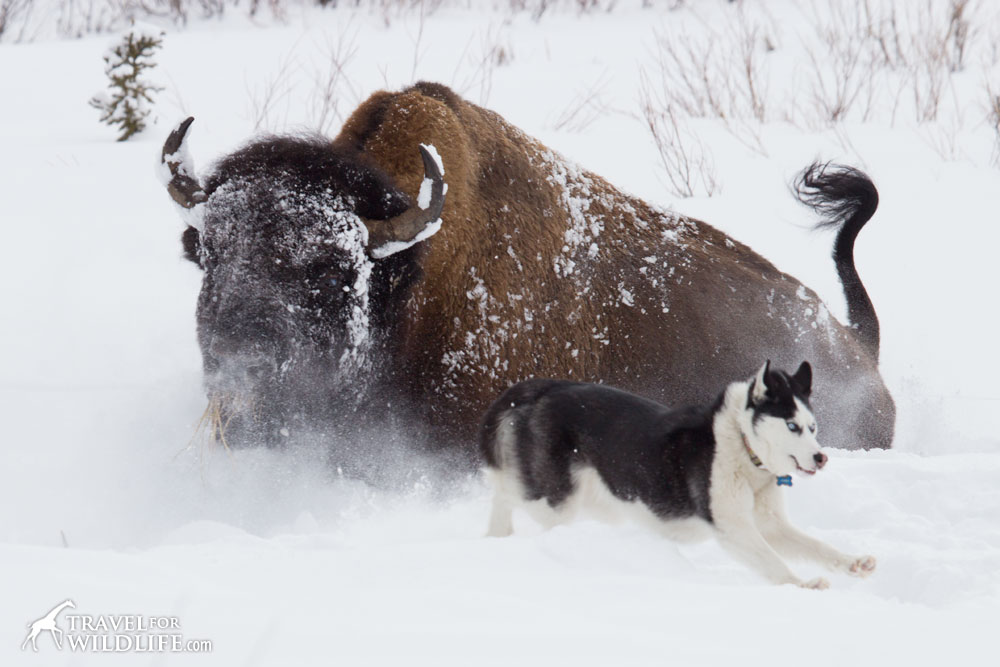 Jackson the bison and a dog

Over the course of the week we would watch three different packs on five occasions. My curse had definitely been lifted. Now I can look forward to many more years of wolf watching in Yellowstone in the winter!