9 Wildlife Adventures For Your Summer Vacation 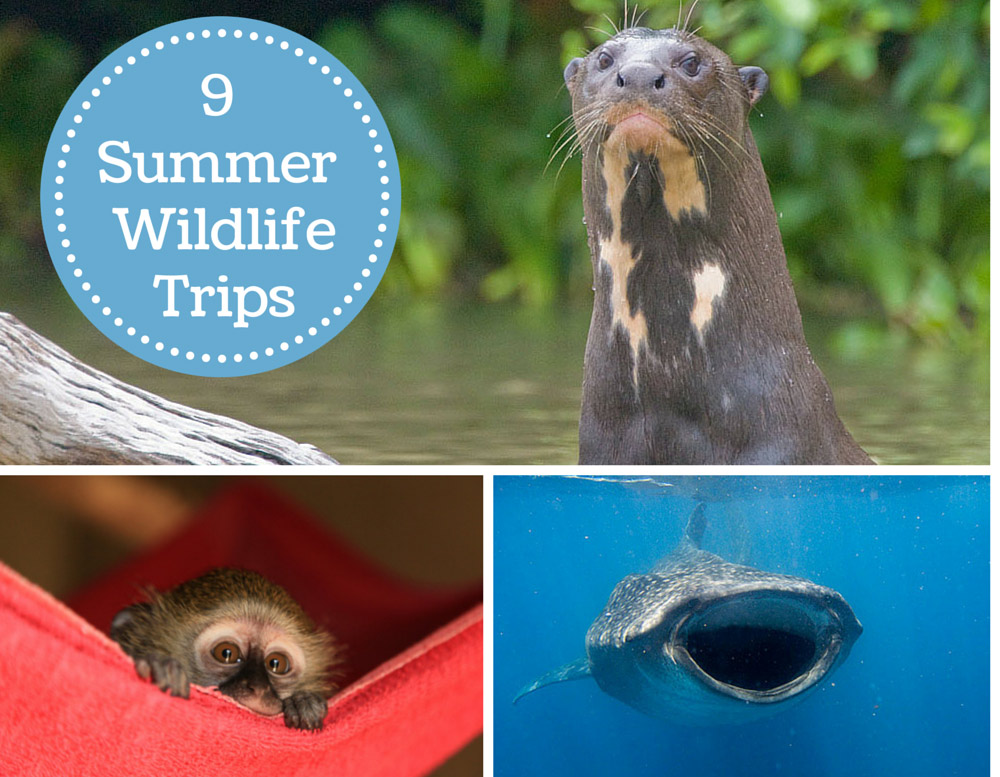 So you want to have an awesome wildlife adventure this summer but don’t know where to start? Fear not. We’ve compiled a list of some of our favorite ideas in wildlife conservation adventure travel, perfect for your summer holiday. Though the snow may still be falling outside the window, it’s not too early to start fantasizing about this year’s dream vacation. So dive in, find what moves you, and make it happen! 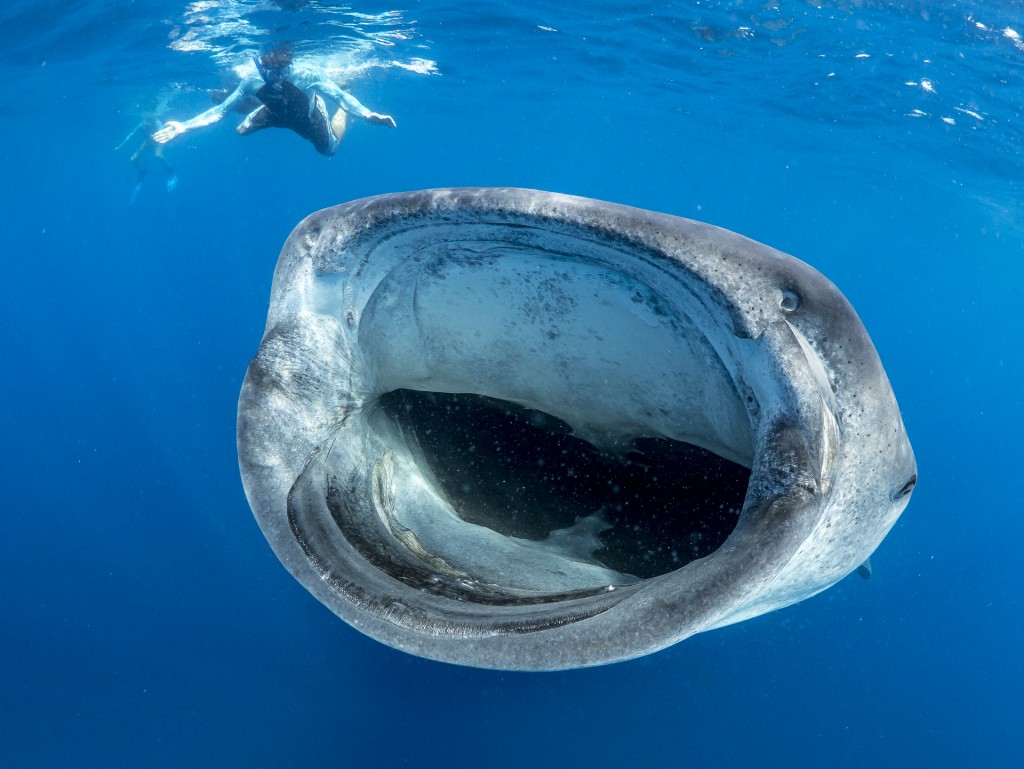 Swimming with the largest fish in the world is a humbling experience. The whale shark is a plankton eating fish that grows up to 62 feet, and during the summer months they aggregate off the coast of Isla Muejres. some years, 400 whale sharks have been counted and its not unusual to see over 100 individuals from the boats.

Your participation in this conservation trip will enable Aqua-Firma to help fund the research of whale shark behavior and distribution, which will be a big part of this experience. Every day you’ll spend six hours on the water locating whale sharks, swimming with them to assist in digital photo ID, recording behavior, and noting species which use the whale sharks as mobile habitats. Dr. Pierce will carry out DNA sampling.

We recommend you extend your visit and visit the Maya ruins of Calakmul and the Sian Ka’an Biosphere Reserve for a complete Yucatan Wildlife Experience.

This is an incredible opportunity to see and learn about Europe’s predators. The Wolf, Bears, and Lynx Conservation Tour is not only a wildlife watching holiday, it is a learning holiday. You’ll meet some of Sweden’s foremost wildlife researchers, stay with sheep farmer’s in wolf territory, learn from professional wildlife trackers, talk to hunters, watch beavers from a canoe and spend the night at a bear hide.

For each participant in the tour, Wild Sweden will pay for a 45-minute wildlife lecture for children in a local school. That means 20 kids will learn about wildlife and co-existence with predators if you sign up!

This 8-person adventure is an active vacation. It may involve walking up to 2h in uneven terrain off-trail. Recommended minimum age is 15 years.

Volunteering with wildlife is a great way to spend your summer.

In the heart of Malawi’s capital city sits Lilongwe Wildlife Center: a wildlife rescue, conservation, and education center. The center reclaimed and revived 90 hectares of urban wilderness to provide sanctuary for orphaned, rescued and injured wildlife. In 2011, the center was awarded Best for Conservation of Wildlife & Habitats in the World Responsible Tourism Awards.

Lilongwe volunteer programs range from animal care, rehabilitation & release, and community projects like education, tree planting, PR, website design and other. There is also the possibility of volunteering at their partner project, Kuti, a wildlife reserve just two hours from Lilongwe where you might have the chance to work in biodiversity conservation and park management. Through the center you can also have the opportunity to volunteer with African Bat Conservation conducting bat research projects. 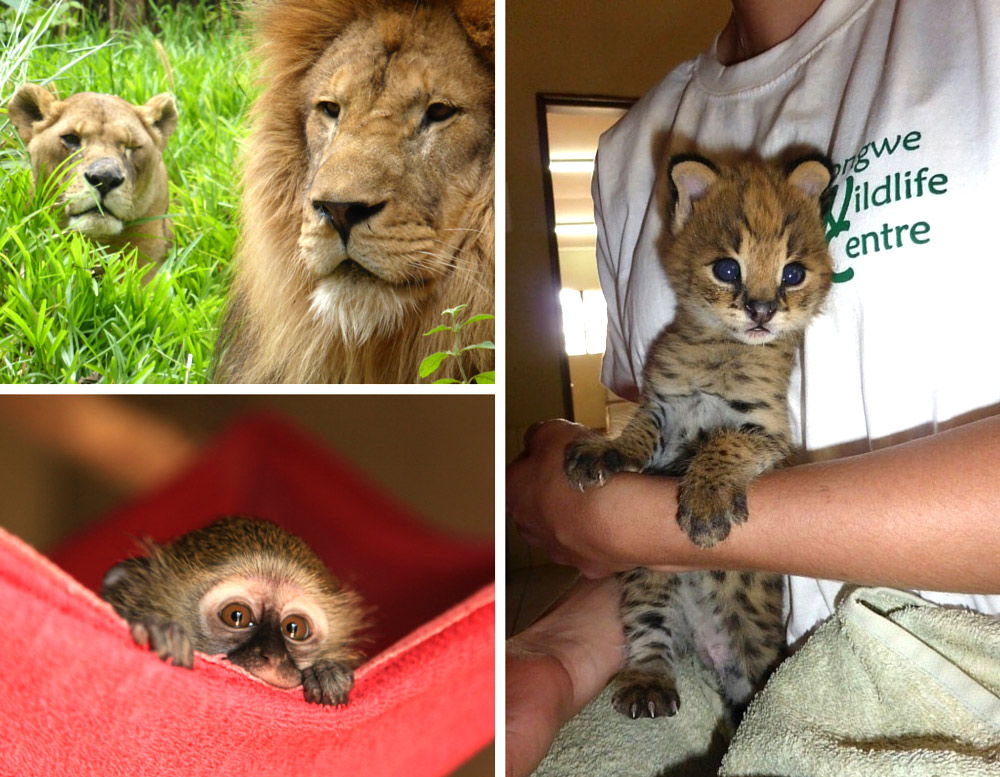 Some of the animals at Lilongwe have even made international news. Like Bella, the one-eyed lioness pictured above. Born in 2002 in a Romanian zoo she was sold to gypsies and sold back to the zoo when she became too big. In 2007 the zoo shut down and thanks to a campaign by Born Free Foundation and the group Lion’s Roar, she was moved to another facility where she got surgery  on her eye and where she recovered her strength. In 2009 she arrived at Lilongwe where she now lives with Simba (also pictured).

You can make a difference in these animal lives!

Walk with Polar Bears and Swim with Beluga Whales in Manitoba 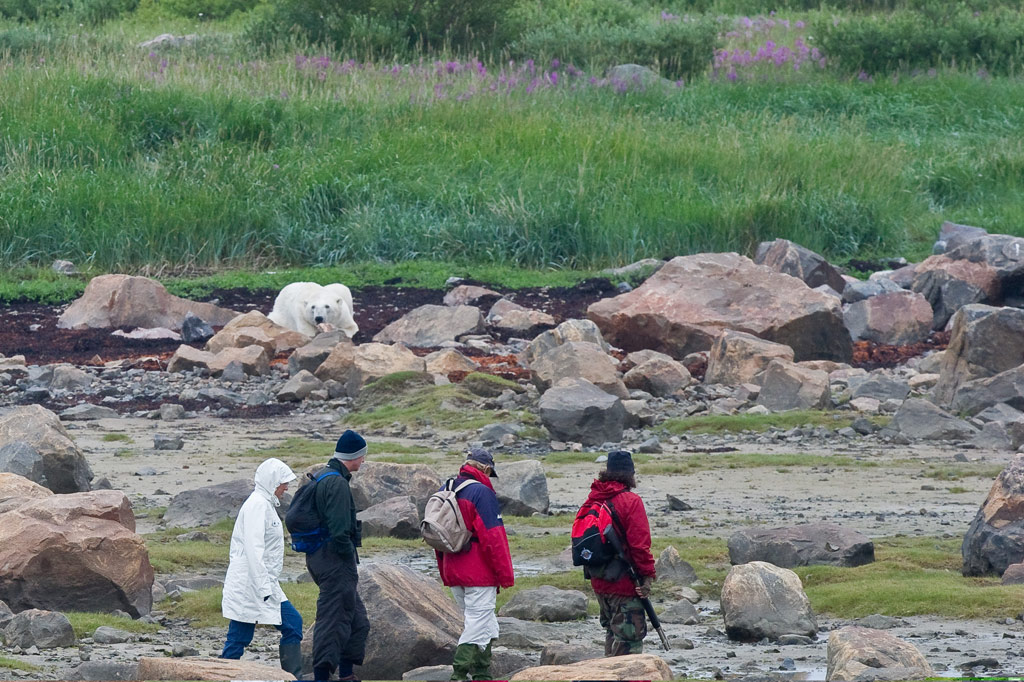 The Seal River Lodge in Manitoba has been doing this program for years with no casualties. Their highly trained guides will take you on walking tours in the vicinity of the lodge to learn about tundra ecology. When polar bears are encountered, your guide will make sure a safe distance is kept. Also, as highly trained guides, they can read polar bear behavior and act accordingly.

Churchill Wild is an adventure company that owns and operates fly-in polar bear eco-lodges in the Arctic. They offer various tours and adventures, but if you join the Birds, Bears and Belugas adventure at their Seal River Heritage Lodge, you will experience two of the most amazing wildlife encounters on earth during the same week, polar bear encounters and swimming with beluga whales.

Join Echidna Walkabout Tours in a wildlife tour of the Top End, Australia’s Northern Territory. Echidna Walkabout were awarded Gold for Best Wildlife Conservation in the World Responsible Tourism Awards at the World Travel Market in London last November. You couldn’t be in better hands!

Northern Australia is like nowhere else in the world. This adventure will take you to Kakadu and Mary River National Parks where you’ll learn about wildlife in the Top End and help protect them. Watch brolgas fly during sunset hours and crocodiles bask in the riverbanks while the calls of cockatoos and flying-foxes fill the air as a wallaby bounces by.

Check out the video on their Top End adventure.

In 2014, a staggering 1215 rhinos were killed for their horns. People around the world are getting together to help stop this massacre.

Accommodations will be available at a secure camping village with authentic bush cuisine prepared for the participants under the night’s sky.

All proceeds of the bike ride will go directly into the Zululand RHINO Reserve Foundation. The foundation is “Committed to the conservation of endangered species whilst establishing, maintaining and supporting partnerships with neighbouring Zulu communities”.

Join a Gorilla Safari with On Track Safaris © On Tracks Safaris

This 12 Day Gorilla Safari with On Tracks Safaris is a great opportunity to visit some of our closest relatives. On Tracks Safaris was awarded the Silver Award at last year’s World Responsible Tourism Awards in the category of Best for Wildlife Conservation.

This safari will take you first to Murchinson Falls National Park, then to Queen Elizabeth National Park to track chimpanzees. The highlight will be your time at Bwindi Impenetrable Forest National Park, home to the few remaining mountain gorillas, where you’ll spend a day trekking, photographing, and observing the gorillas. Other wildlife that may be seen are white and black Colobus monkeys, the Ishasha tree-climbing lions, shoebill, hyenas, elephants, hippos, antelopes, crocodiles, pink backed pelicans, pied and malachite kingfishers, Saddle-billed storks and others.

This vacation is not suitable for families with small kids as children younger than 12 are not allowed.

Visit the Walruses of Round Island, Alaska 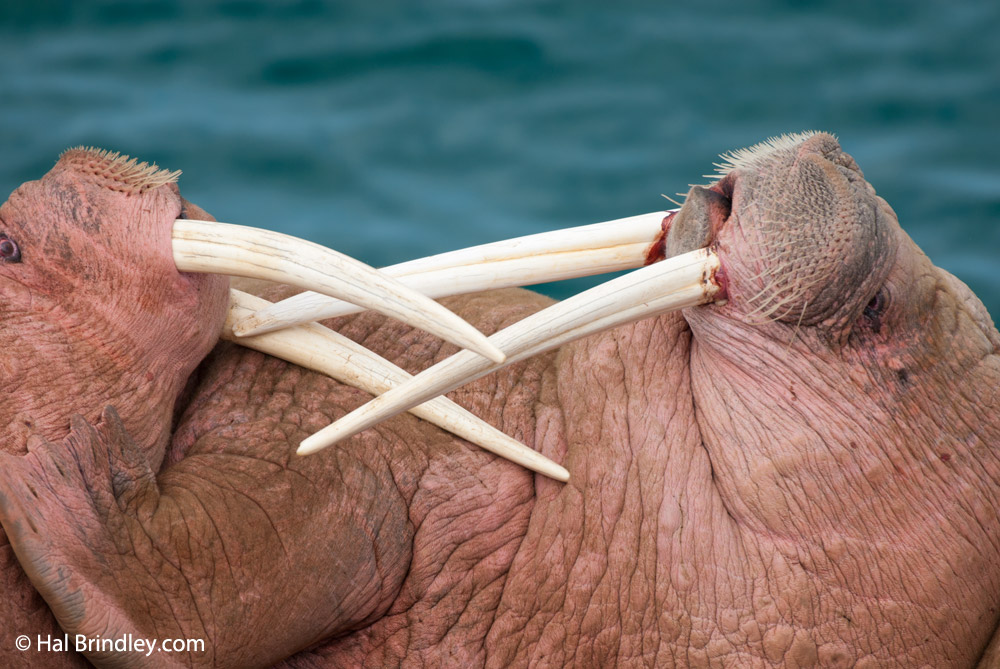 If you are looking for a remote wilderness experience with a unique animal, then you should visit the walruses of Round Island in Alaska.

Every summer, thousands of walruses congregate on the beaches of this tiny island. Getting there is tricky and not cheap, but once you get to the island, you can pitch your tent (the only building in the island is the caretaker’s) and spend all your days in the company of walruses, steller sea lions, and colonial nesting birds like puffins. Go to sleep while listening to the walruses chiming. 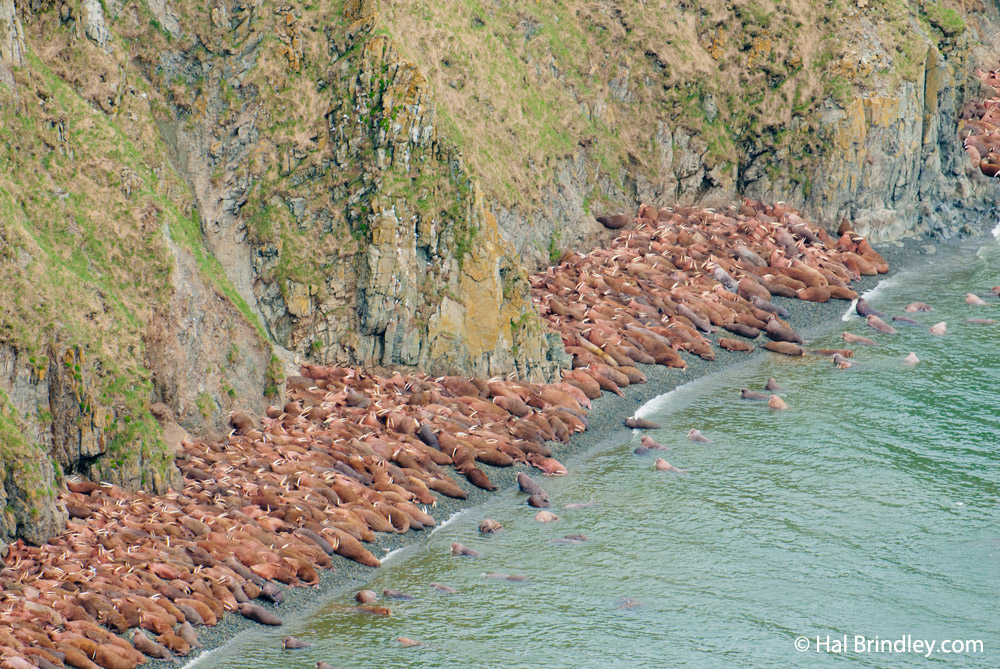 Walruses congregate on the beaches of Round Island, Alaska

I always wanted to go to the Pantanal to see jaguars, one of my favorite predators. But if you are traveling all the way to Brazil why not see a little more? This country is huge and there are so many amazing creatures to see. The Brazil – South America’s Big 5 tour offered by Naturetrek visits two areas and concentrates their efforts on watching the Brazilian Big 5: jaguar, giant river otter, giant anteater, maned wolf, and the Brazilian tapir.

This 17-day tour will take you from the remote dry tropical forests of Paranaiba Headwaters National Park where you’ll observe the maned wolf, bearded capuchin monkeys, and hyacinth macaws to the wetlands of the Pantanal. It includes night drives to look for the Brazilian tapir, lodging at a floating hotel, and river based wildlife watching while searching for jaguars. 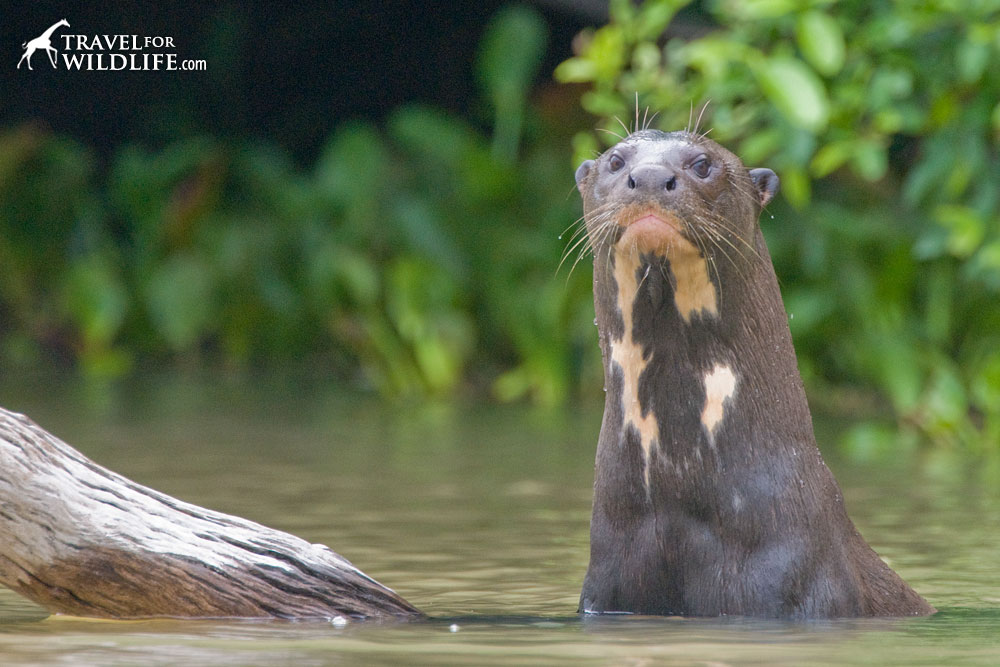 Look for giant otters in the Pantanal

What is your dream wildlife adventure? What are your plans for this summer? Let us know in the comments below!