Who’s In Our Yard? The Results of a Camera Trap Experiment 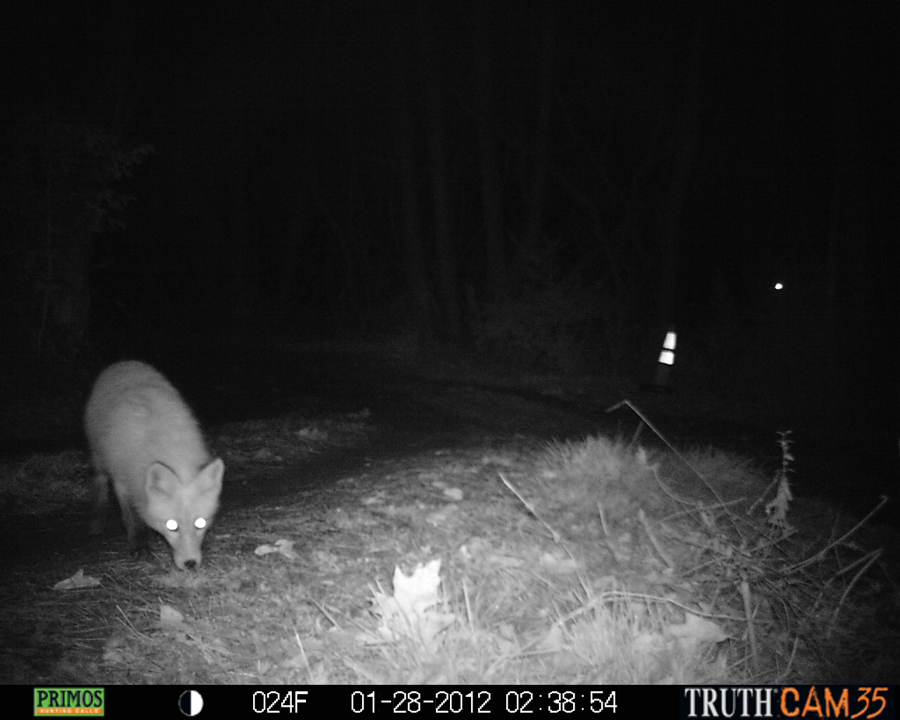 “I know what I want for Christmas! A camera trap!”

Even though I rolled my eyes at Hal, it didn’t take me long to realize this was a genius idea. Hal wanted to put a camera trap in our yard to see what creatures run around it. All I could think was squirrels, squirrels, rabbits and more squirrels. But then, I wasn’t thinking of the wildlife that come out at night. 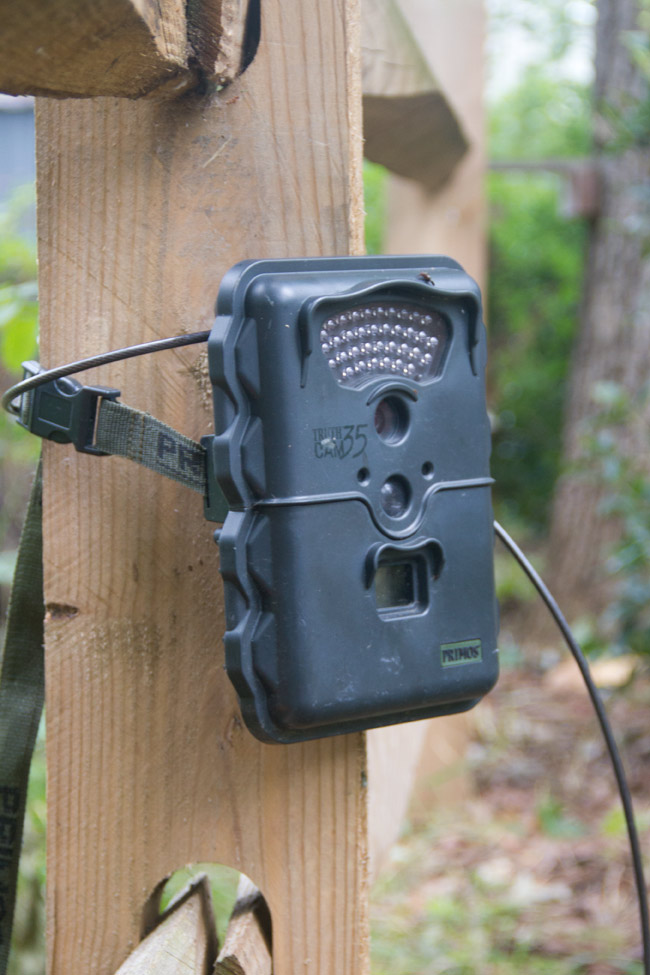 Hal knew what he wanted: a camera with an infrared flash to be able to photograph wildlife at night without spooking  them, and a video mode. Camera traps are usually used by hunters to keep an eye on the game and by scientists to monitor wildlife species without being intrusive.

The more Hal talked about the camera the more excited I became. We could take the camera trap with us when we went camping and see who walked around our tent! Bears, lions, monkeys… We could take it to Africa!

Christmas arrived and Hal got his much-anticipated camera: a Primos Truth Cam 35.

When we first moved to our suburban North Carolina home, we decided to put a compost bin in our yard. We made it wildlife proof (cinder blocks with wire fencing on top) so animals could not get in. The smell of rotting food would surely attract them so that was the obvious place to test the camera. Soon we were getting photos of neighborhood cats, but we also caught these guys trying to get into our rotting food.

Opossums were not only attracted to our compost. One of them loved the fact that we  left our Halloween pumpkin in our backyard. 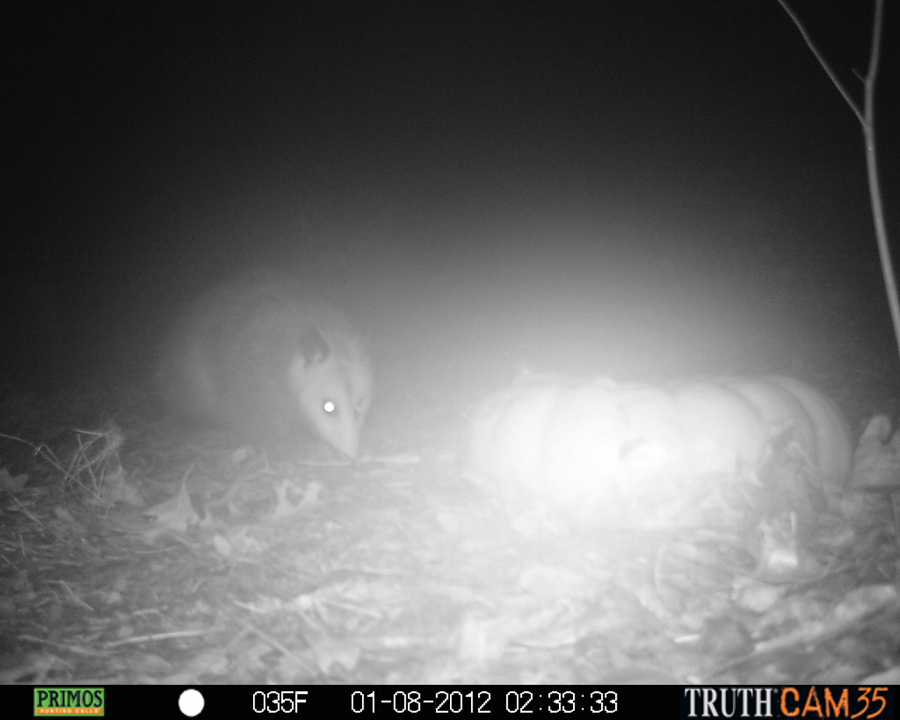 Inspecting a pumpkin on a foggy night

Then there were raccoons. In the past two years we  have only seen one with our own eyes. It was broad daylight and he was walking along our fence. One day I checked the compost bin and I saw that a raccoon had scraped a watermelon rind clean. His claw marks were all over. I could imagine him sticking his arm in between the wire fencing as deep as he could to try and get to the juicy watermelon.

After that, we had to raise our compost bin after that so that he would not be able to reach in there. 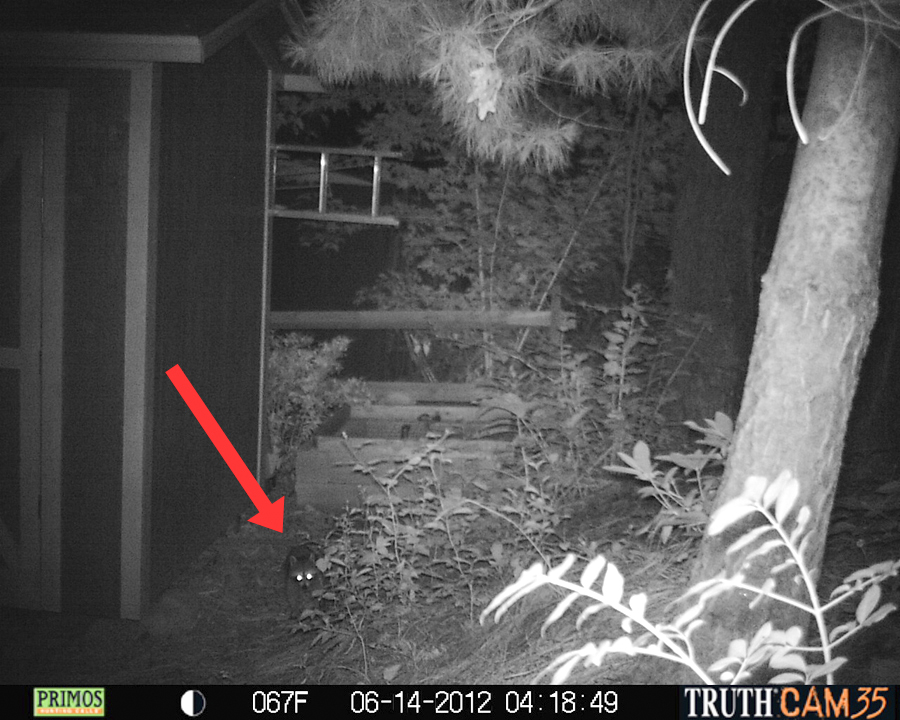 A raccoon by our compost bin

One of the most photographed animals has been (of course) the squirrel. They are everywhere and are pretty curious about the camera trap. It does not matter where we move it, they are always there. One day we decided to put it along our wooden fence. This fence is a favorite highway for our wild neighbors and the camera has caught many animal rear ends. 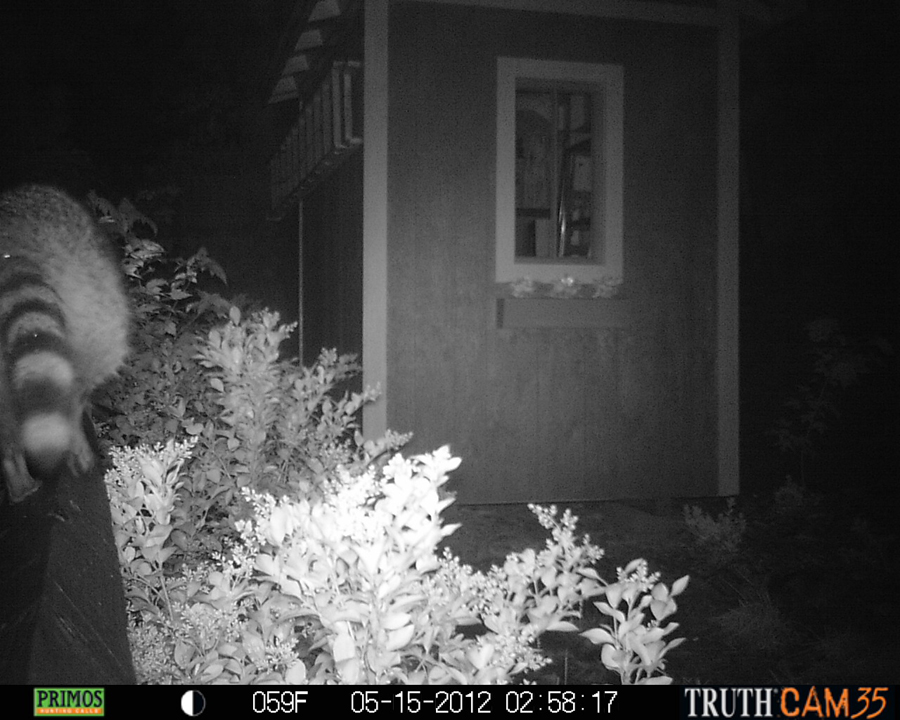 Raccoon walking along the fence 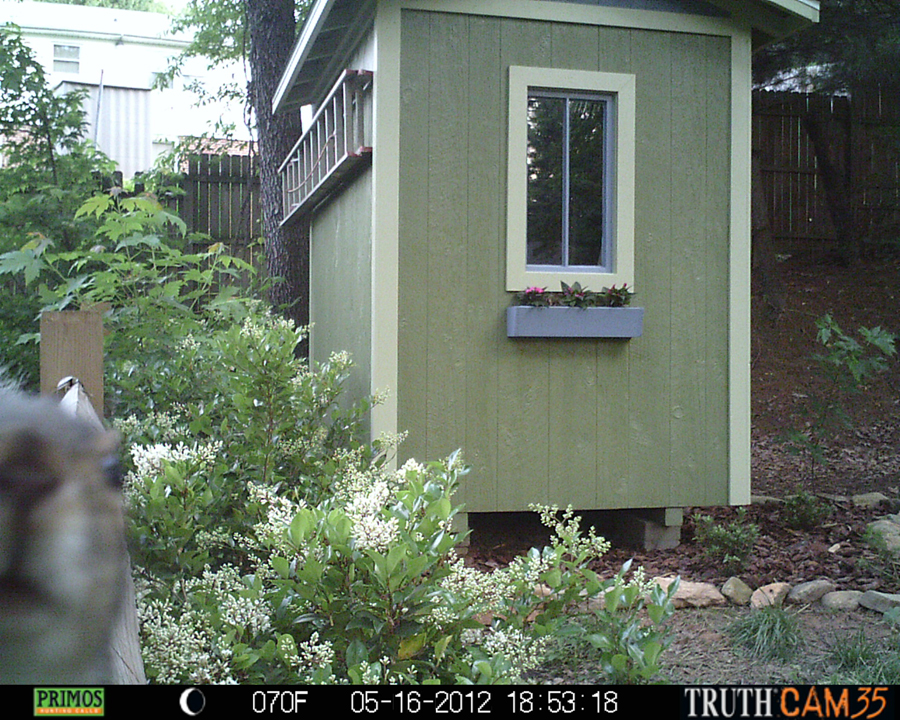 A squirrel checking out the camera trap

After three weeks of having our camera trap we got a huge surprise. In the beginning we used to check the camera pics every morning. And when we were used to having just squirrels and opossums pics…we screamed with excitement at the sight of our latest neighbor to be photographed by the camera. A red fox! On winter nights we were used to hearing the scream of the red fox. We had heard him walking along the dried leaves in our yard and barking from behind some bushes but had never seen him. Until now! 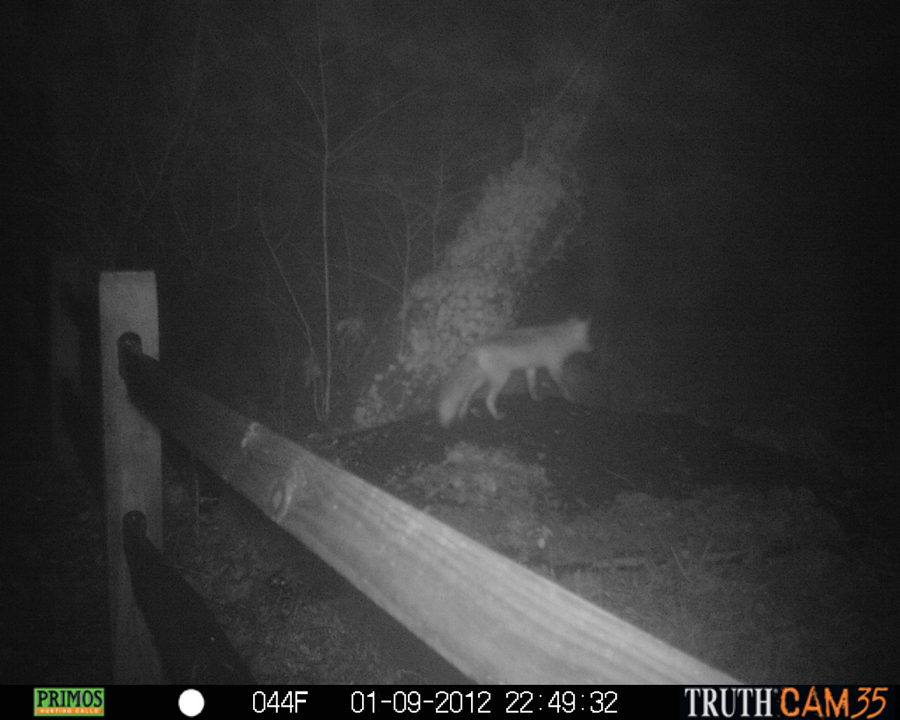 A red fox prowling around

Red fox checking out the camera 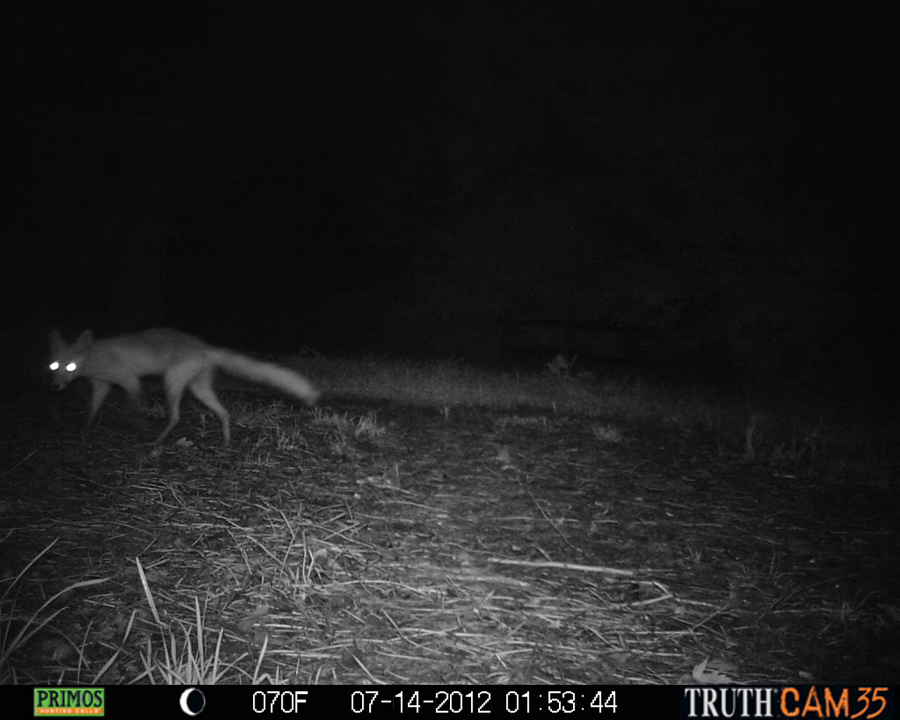 Red fox in its summer coat

After catching this guy we even thought (dreamed) that one day we might get a deer or a black bear. We live in a high density black bear area and there is a patch of woods next to our house. A perfect place for both of these species. Somehow, these creatures have not made it into our yard. Yet.

Instead of these large animals, we got a few other small ones. Sometimes we have to look twice at a photo to find who triggered the camera trap. Like chipmunks. 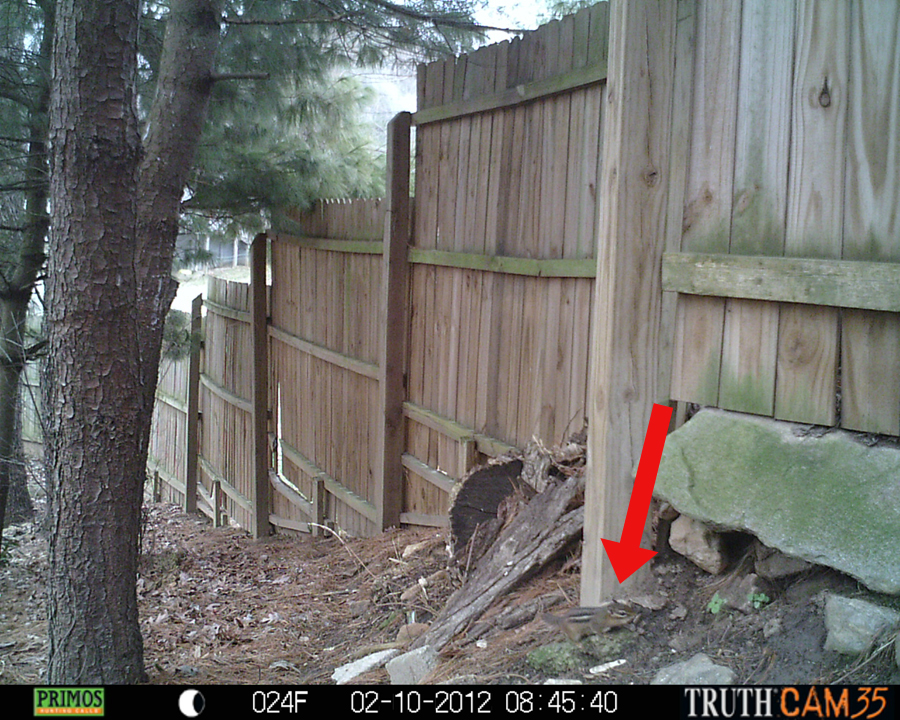 Chipmunks are difficult to see

Last year there was a woodchuck family living in the field right next to our house. One sunny spring day we saw two woodchuck babies strolling around our yard with their mom. Our camera trap hasn’t recorded any photos of babies yet, but we have captured some other cute woodchuck moments like this one: sunning on an old canoe next to her den entrance (under a shed.) 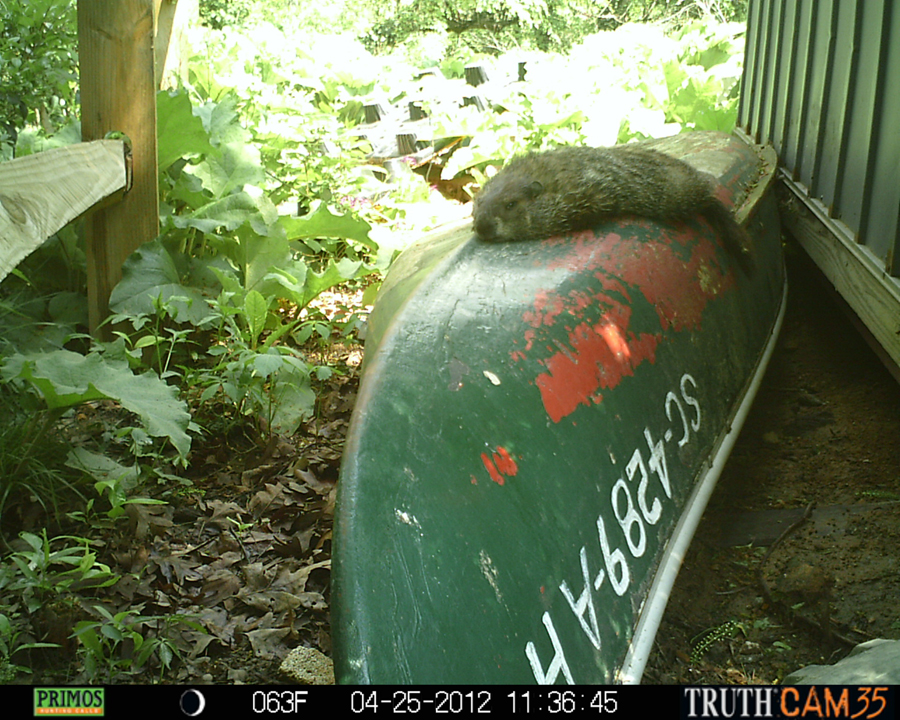 Resting in front of her den entrance

Now, wouldn’t it be great to get a photo of an owl? We have a eastern screech owl in our neighborhood who is very vocal at night. I keep thinking that one day he will stand on our fence and look into the camera with a half tilted head and big eyes. It seems he is pretty stubborn because we haven’t photographed him yet. Other birds, however, make regular appearances. 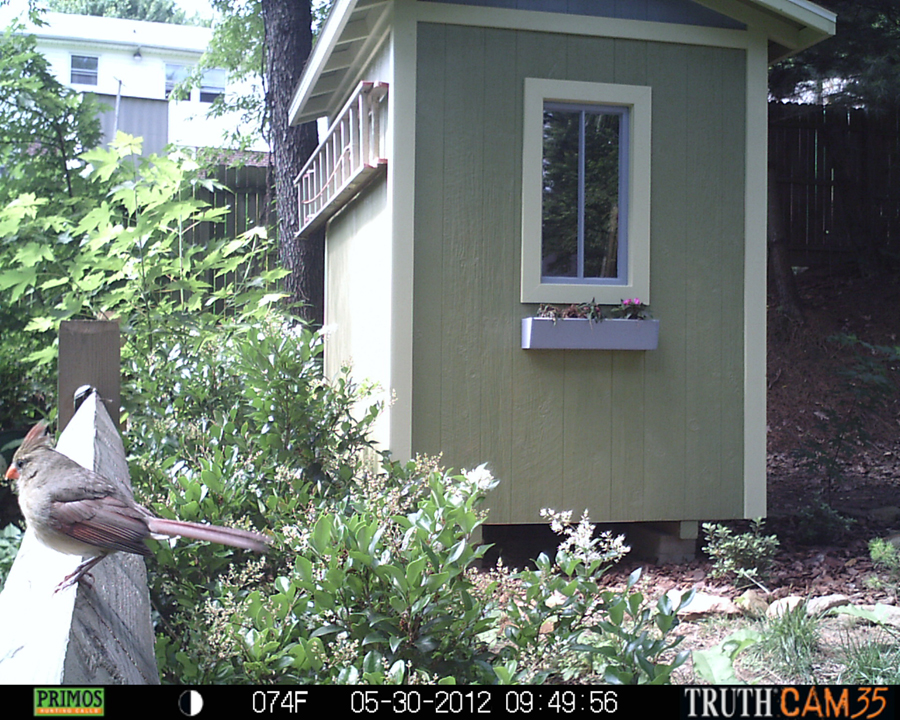 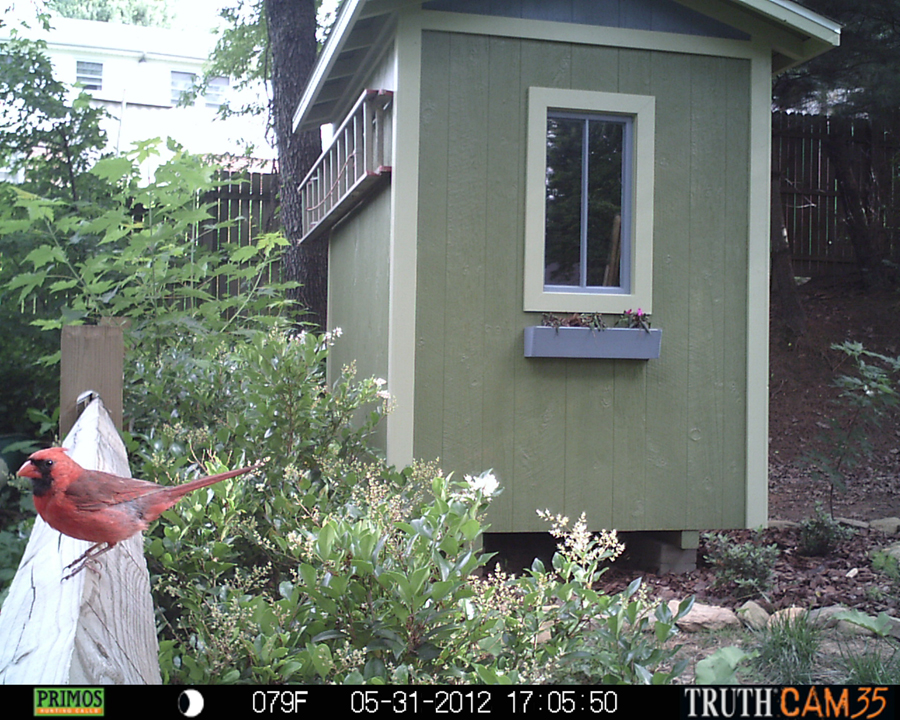 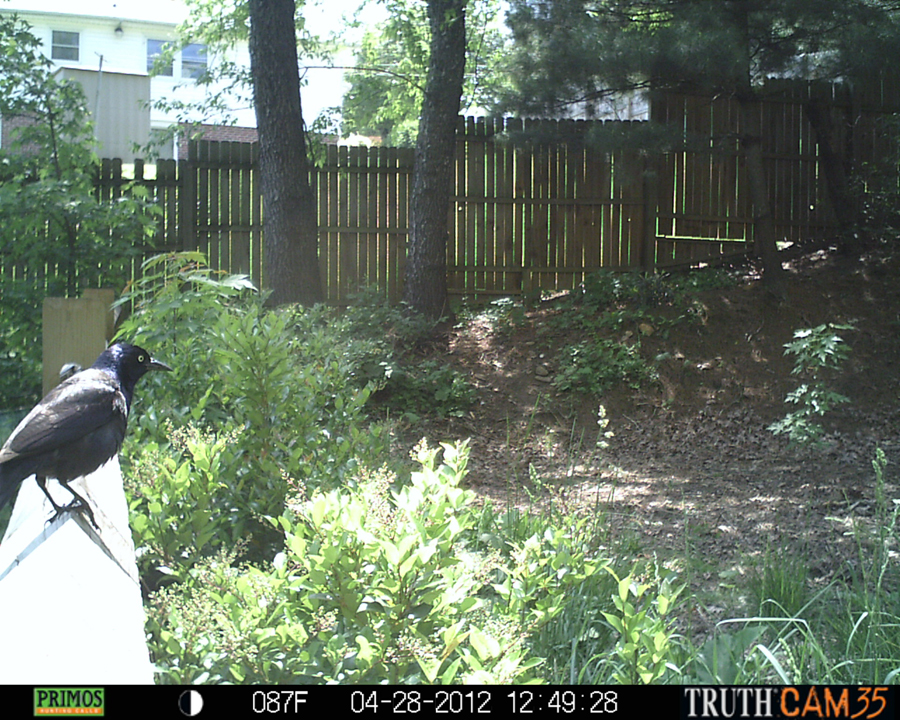 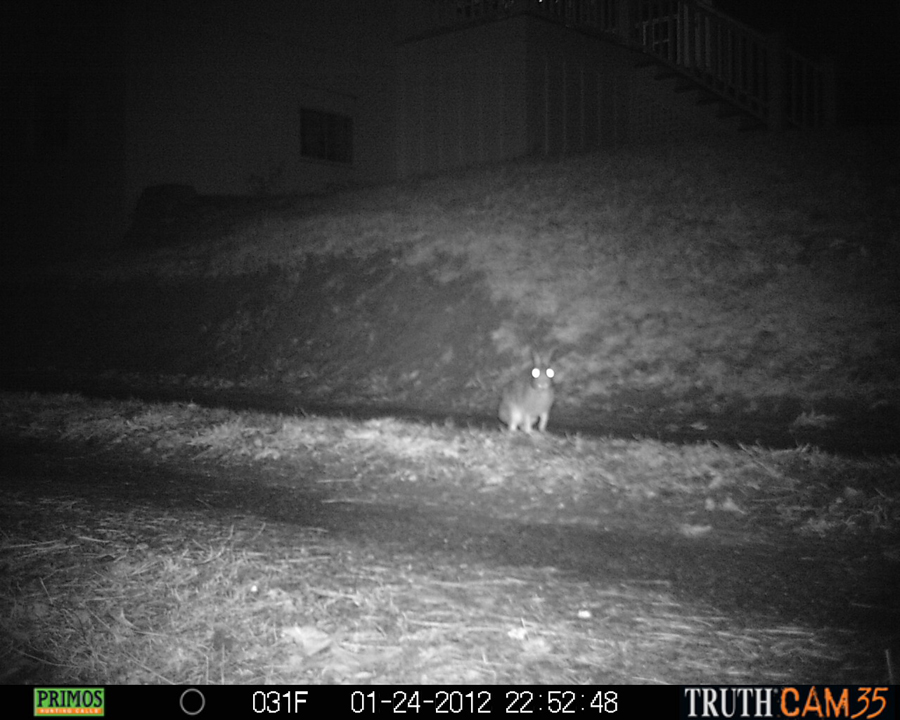 Even when we don’t catch any wildlife, the camera trap is still fun. It has given us an insight into the lives of our cats when we are not around.  I used to think they were in the house all night snoring like wild boars, but we soon discovered they were wandering out in the yard at all hours of the night! That must be why they sleep all day. 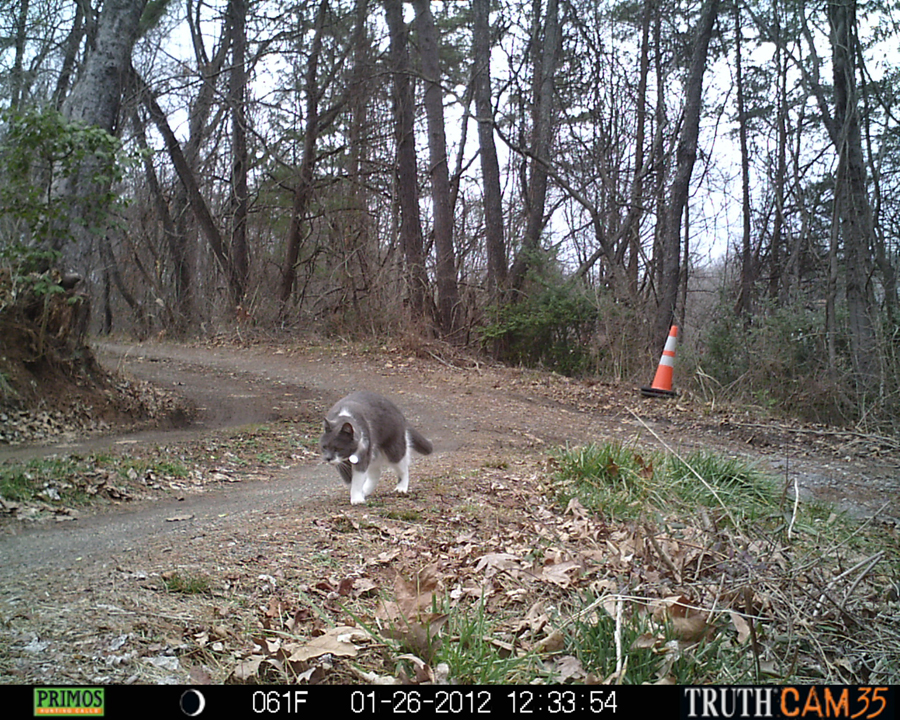 Scamper, one of our cats

Only two days ago we had a visit from someone we have never seen around our house. A coyote! It stopped by our front yard to drink from our bird bath. 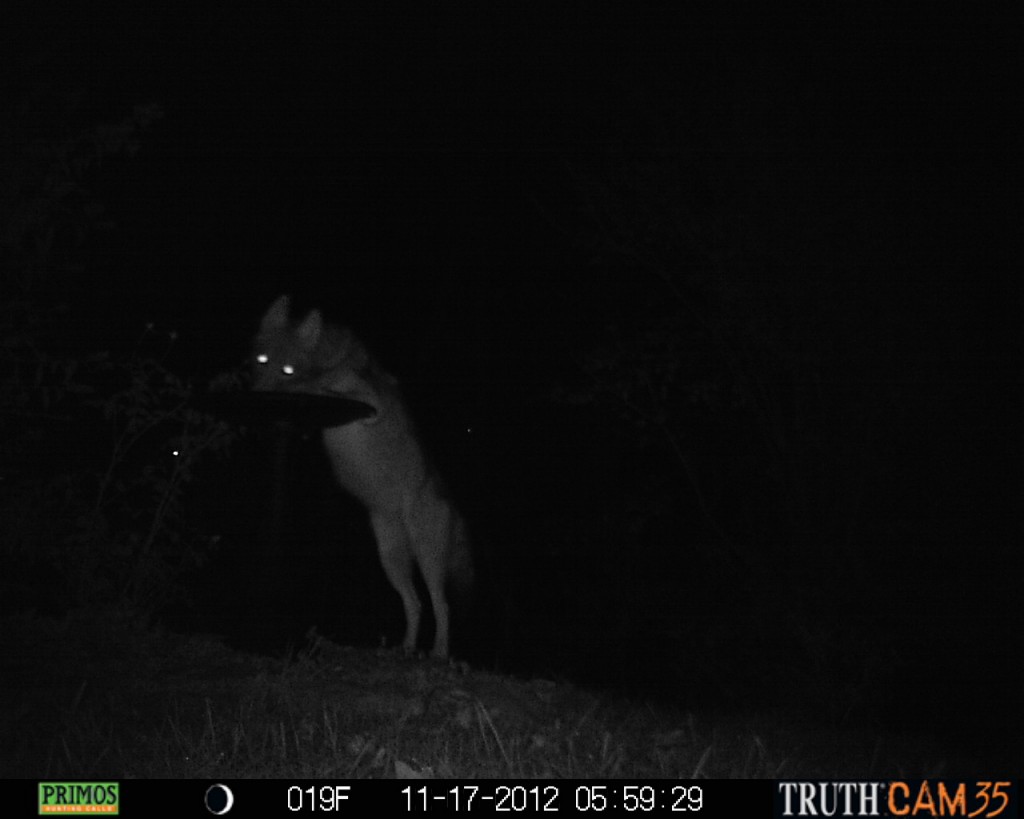 Coyote drinking from our birdbath 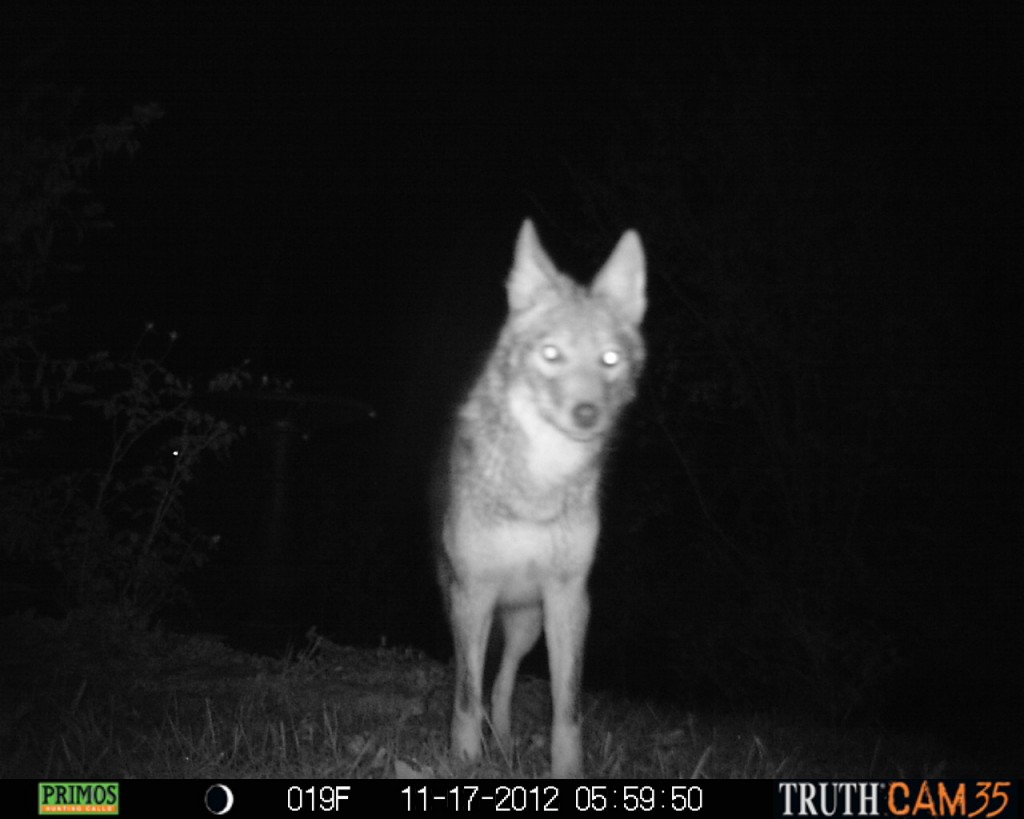 Portrait of our neighbor the coyote