I was so excited to open my mailbox and discover a copy of Becoming Wild: Living the Primitive Life on a West Coast Island

by Nikki Van Schyndel, whom we had the pleasure of spending a day with during our American Safari last year.

It was the second day of our stay at Nimmo Bay Resort along the coast of British Columbia in Canada. Fraser, the owner of Nimmo Bay, had arranged for us to take a tour with a mysterious woman named Nikki. “She is a really special person. You are going to love your time with her.” Everybody had so many great things to say about her that we began to doubt whether it could all possibly be true. We were told fanciful tales of her adventures living off the land for months at a time with her friend and her cat. But within a few short hours we would be passionately singing her praises as well. Nikki truly is an amazing woman. 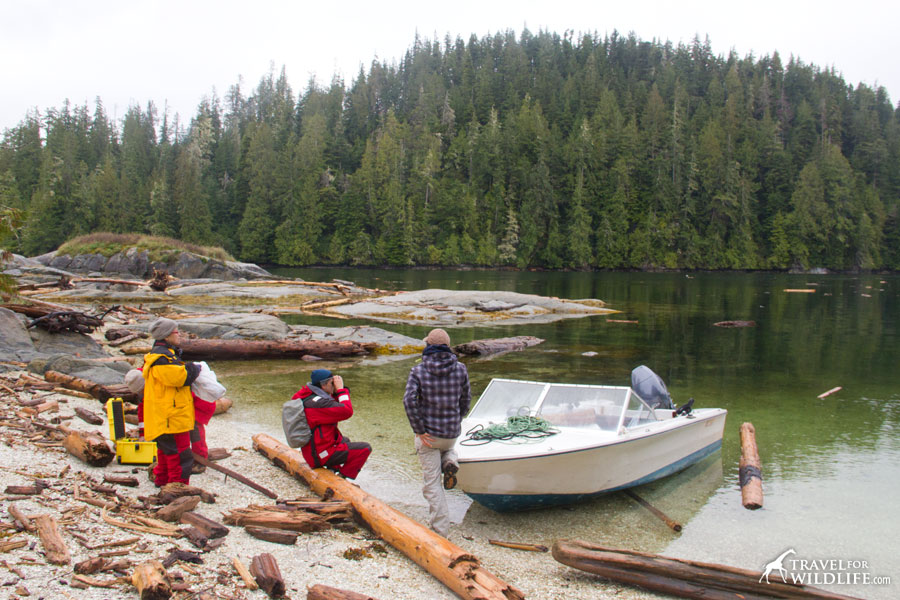 Nikki lives in Echo Bay, a tiny inlet on Guilford Island in the Broughton Archipelago, where she runs her tour company, Echo Bay EcoVentures. Through her tour company she immerses guests in sustainability, primitive living, foraging and primitive survival.

Our host Fraser dropped us on a remote white shell beach as the morning fog was just starting to dissolve and we were greeted with Nikki’s contagious smile. As a curious seal eyed us from the water, she taught us about the different edibles to be found on the beaches of this wild and deserted coast. Berries, sea asparagus, wild onions, flowers, roots…We spent almost an hour gathering items that would later become our lunch. 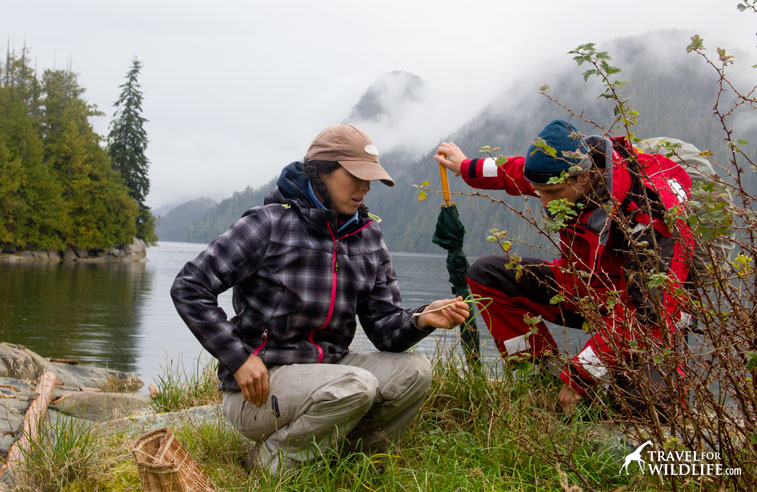 Nikki showing us how to find wild onions 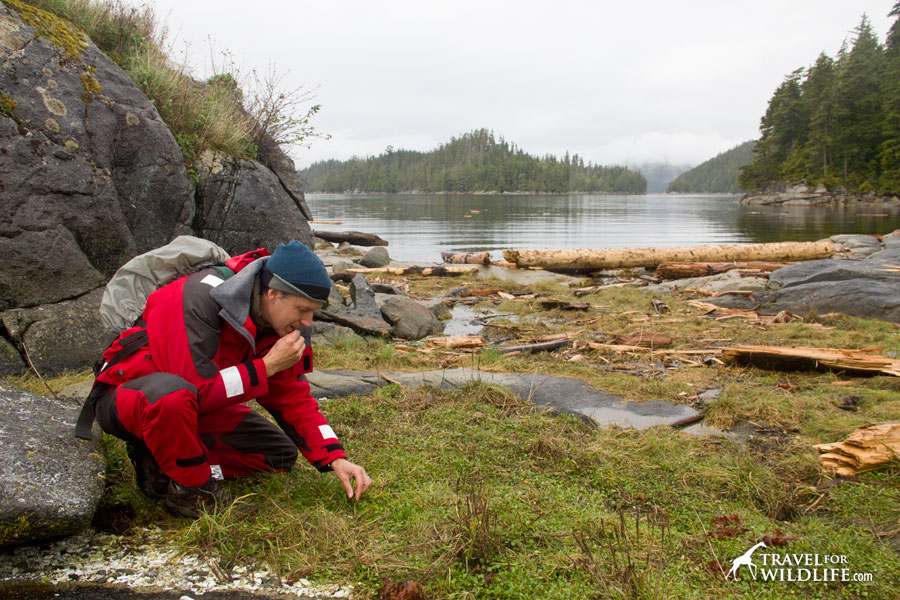 After our foraging session, Nikki took us to her secret spot. It’s a small island somewhere deep in the Broughton Archipelago where she has built a few primitive shelters amongst the giant fairy tale trees. Nobody knows exactly where this place is and I wouldn’t be able to find it again if I tried, but one thing I know is this place is absolute magic. I kept thinking there were wolves watching us from the shadows. This thought comforted me. If there are wolves around, everything is OK.

Surrounded by tall mossy trees and ancient shell middens, a few primitive shelters stand around a central fire circle. It was like the real life version of the lost boys camp from Peter Pan. Nikki showed us how to make fire with sticks (a bow and drill actually). Then she cooked our wild lunch using the edibles we had collected earlier by the beach. Over lunch she told us a few tales from her time in the wilderness. Like the one about the mountain lion who stalked them for days and went after her cat Scout. I knew then that I had to read her book. 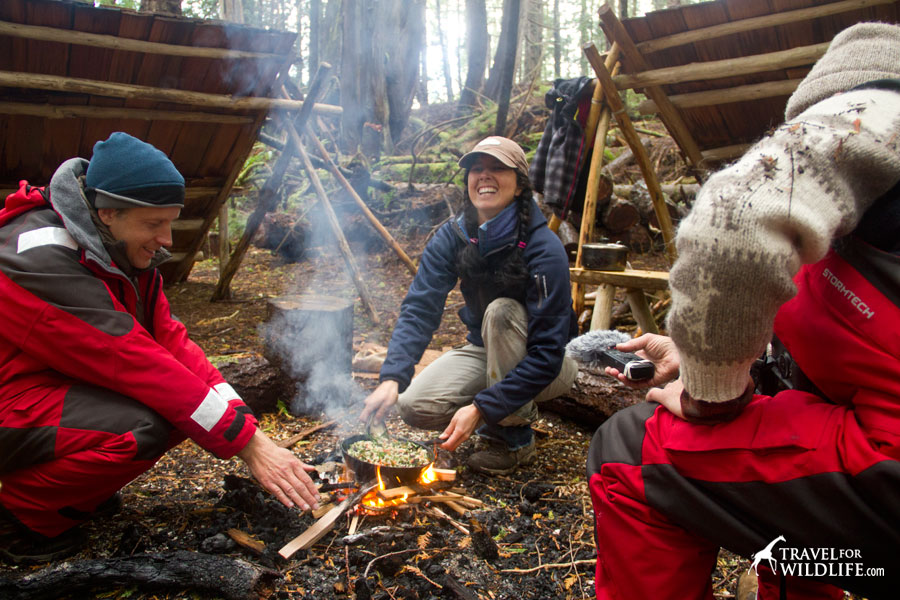 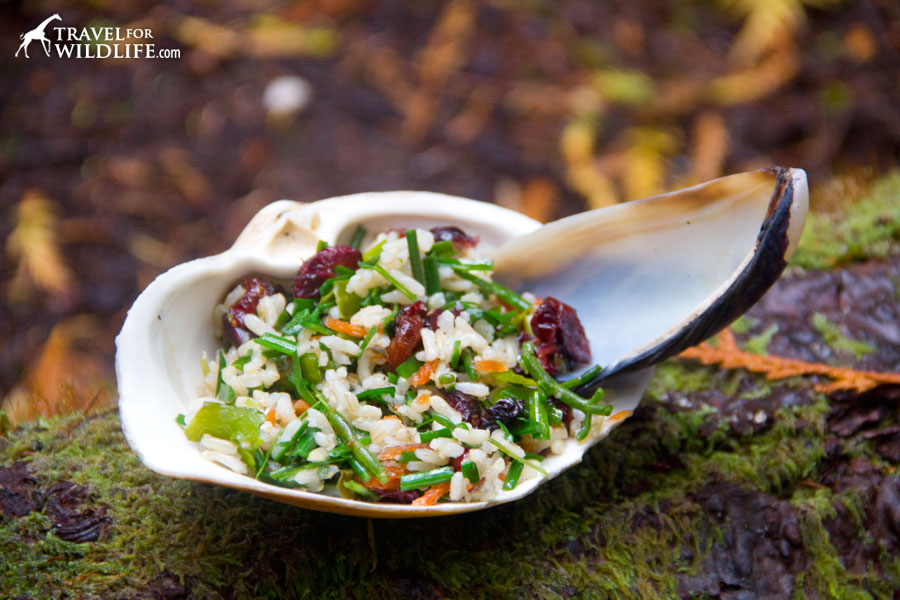 Our wild lunch made out of rice, cranberries and sea asparagus served on a shell. We used a mussel shell as spoon.

[box style=”quote”]I lived a year and a half with nothing, and for the first time had everything – Nikki Van Schyndel[/box]

Becoming wild is more than a book about survival. It’s a book about the personal path and discoveries that took Nikki from being a city girl to a modern cavewoman (That’s what she called herself! – I like it). It was a long journey for her. From being as detached as one can be from nature (she didn’t even know the name of the tree in her mother’s yard) to learning about plants, animals, natural medicine, tracking and trapping, basketry, and the skills necessary to make utensils, tools and weapons. She spent years preparing herself for her big dream: to live off the land and survive on a tiny island in the Great Bear Rainforest.

While living in the wilderness, and with hardly any possessions,  Nikki discovers what it felt like to truly be free. Free of modern day expectations, consumerism and distractions. In their wild retreat, she reconnects with nature and with the spiritual world. It is when she gets back to civilization that she realizes how detached we all are from nature.

This tale of survival, discovery, and friendship grabs you and takes you along as two friends and one cat are faced with the harsh coastal environment, predators, hunger, and heartbreaking decisions. It is a ride you don’t want to miss.