Getting Whacked by a Whale Shark: Close Encounter in Mexico 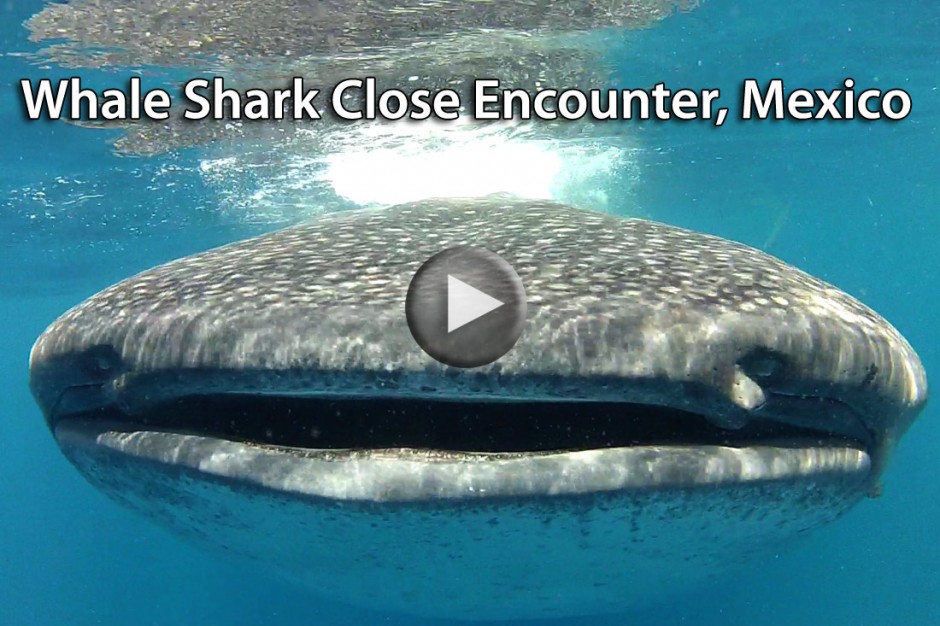 Woah. That guy is big. About as big as our boat. And there’s another one. And another one. They are everywhere, slowly circling with their rounded black fins cutting the surface, the pointed tips of their tall tails waving lazily back and forth behind.  Then one approaches close enough to see a head. It as wide as the hood of a Buick, dark gray covered with a delicate grid of white polka dots. Time to get in the water.

Cristina and I are up first. We don our snorkeling gear and Ruben lines us up on the edge of the boat. He perches next to us and instructs us to slide quietly into the water. The boat is rocking in the open ocean swells and we hold on tightly. I see a black-finned Buick approaching and my adrenaline surges. I glance at Cristina with wide eyes as we both slide down into the crystal blue abyss. And there it is.

The shark instantly fills my vision. It stretches to both ends of my peripheral view, the head all the way to the left and the tail all the way to the right.  The magnification of the water makes it look so close I could touch it. But even from this distance of six meters, the shark appears gigantic. It slowly swims past us, pumping its powerful tail back and forth. When the tail fin finally reaches us it is taller than I am and sharply pointed at the top. I realize I’ve been holding my breath and slowly release it into my snorkel. Ruben looks at us and waves us on. There are plenty more whale sharks to see. 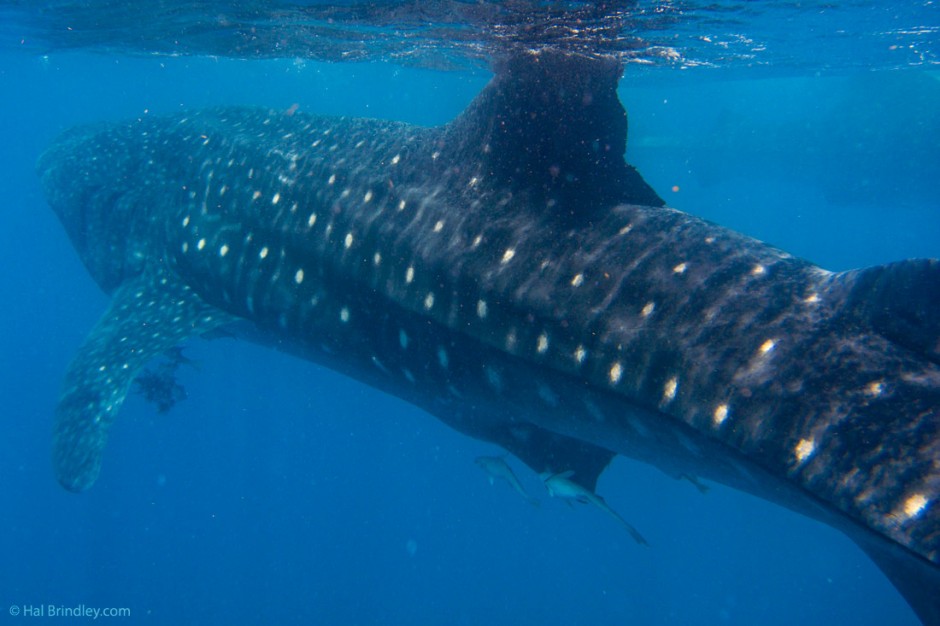 The shark instantly fills my vision.

Here comes another. The behemoth is coming straight toward me. That’s when I see it for the first time, the famous whale shark mouth. The grill of the Buick suddenly opens up from side to side. The entire front end of the creature is mouth. Looking into the abyss of its gaping maw I can see the shark expanding in volume as hundreds of gallons of water pump through its giant gills. Um… it’s not turning. I imagine myself getting sucked headfirst into that pale white cavern and decide I better move over. After a few jerky kicks from my flippers, the shark is now heading slightly to my left and I breathe a tiny sigh of relief into my snorkel. The head is getting wider and clearer as it approaches and I catch my first glimpse of the shark’s eye. He looks straight at me then decides to modify his direction. Directly toward me.

There is no time to move. The mouth fills my vision then suddenly closes. The shark dives beneath me but only by inches. I am laying flat on the surface of the ocean as the world’s biggest fish gives me a detailed tour of its generous anatomy. The wide, flat head soon gives way to a more rounded back, crested by a dorsal fin several feet tall, which is rapidly approaching. I try to dodge it to the right. Suddenly the shark raises itself like a surfacing submarine and I am lifted straight out of the water. That is when I discover what whale shark skin feels like. Like other sharks, its skin is covered with tiny “teeth” called dermal denticles. It is rough, but not exactly like sandpaper because it has direction. More like a stubbly beard made of microscopic needles. It felt like a million tiny pin pricks along my body. Perhaps the shark felt me bonk against his back because he immediately sank again. 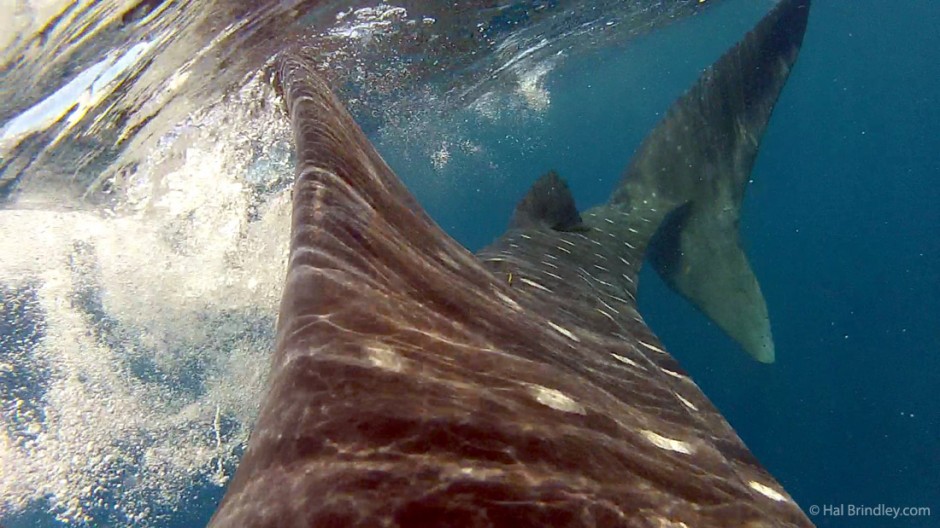 Half way down a whale shark’s back, dorsal fin rapidly approaching

The smaller second dorsal fin passed under me and the swishing tail loomed rapidly toward me. Like the tail fin on a jumbo jet, this vertical blade is rigid and narrow and extremely tall. It swayed back and forth like an executioner’s blade and I couldn’t predict where it might strike me. Again I dodged right but the cartilaginous ridge struck me across the forearm, it felt stiff like a piece of wood, but thankfully the leading edge is rounded and it merely glanced off me.  I looked back and it continued on its path as though it had merely ducked under a piece of floating driftwood.

The rules of swimming with whale sharks in the Yucatan Peninsula of Mexico state you must never approach closer than two meters. Today I learned that the sharks don’t necessarily follow the same rules when swimming with humans.

Stay tuned for a complete tour review and video of our snorkeling with whale sharks tour in Holbox Island, Mexico. Many thanks to Turistica Moguel at holboxislandtours.com for the amazing day. 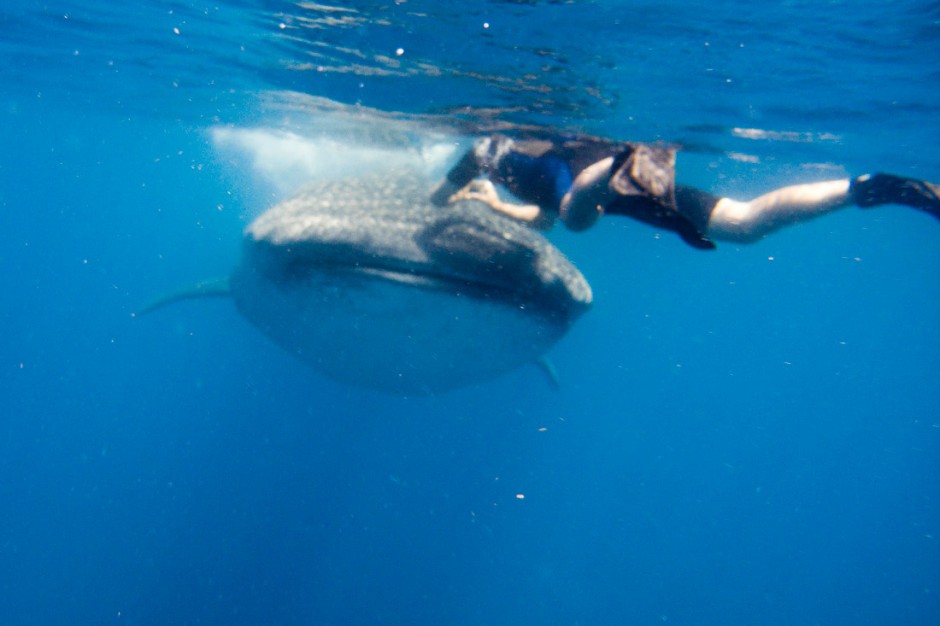 The pic that Cristina snapped just before the whale shark dove under me.

If you enjoyed our Getting Whacked by a Whale Shark article you may also like: