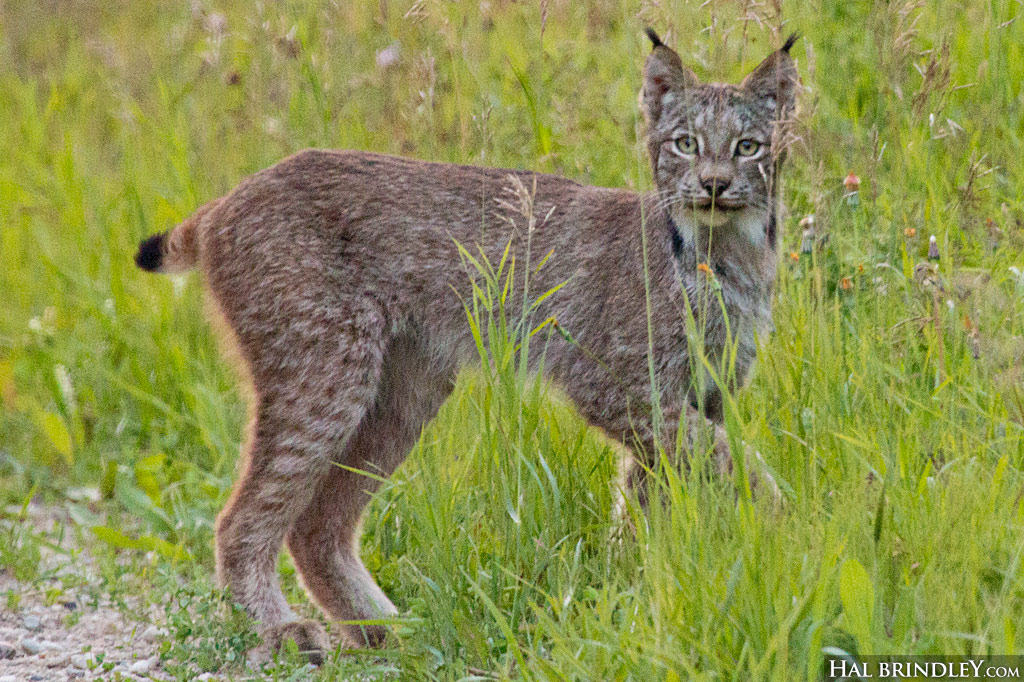 This is  How to Tell the Difference Between a Bobcat and a Lynx. The following story happened during one of our road trips across the US and Canada.

There it was, a large cat sitting calmly in the middle of the road and staring right at us. It was my first wild cat sighting in North America, and it was a lynx! A Canada Lynx! We couldn’t believe our luck. Visitors had reported seeing lynx in the guest book here at Riding Mountain National Park in Manitoba, Canada, but I never believed we would actually see one.

We watched the cat for nearly an hour in the setting sun, hunting along the side of the road. I managed to get a few decent photos and video clips and was very proud to report on our American Safari page that we had seen a lynx.

But then I began to wonder. Had I actually seen a lynx? I looked at a range map and realized that the Canadian Lynx (Lynx canadensis) and the Bobcat (Lynx rufus) overlapped in this narrow band near the US/Canada border.

[Update 2020: Since originally making this map below I’ve noticed the estimated range of lynx has contracted in the U.S. I consider the IUCN Redlist range map to be pretty authoritative and you can always check it against a list of lynx sightings on iNaturalist, but evaluate questionable observations for authenticity.] 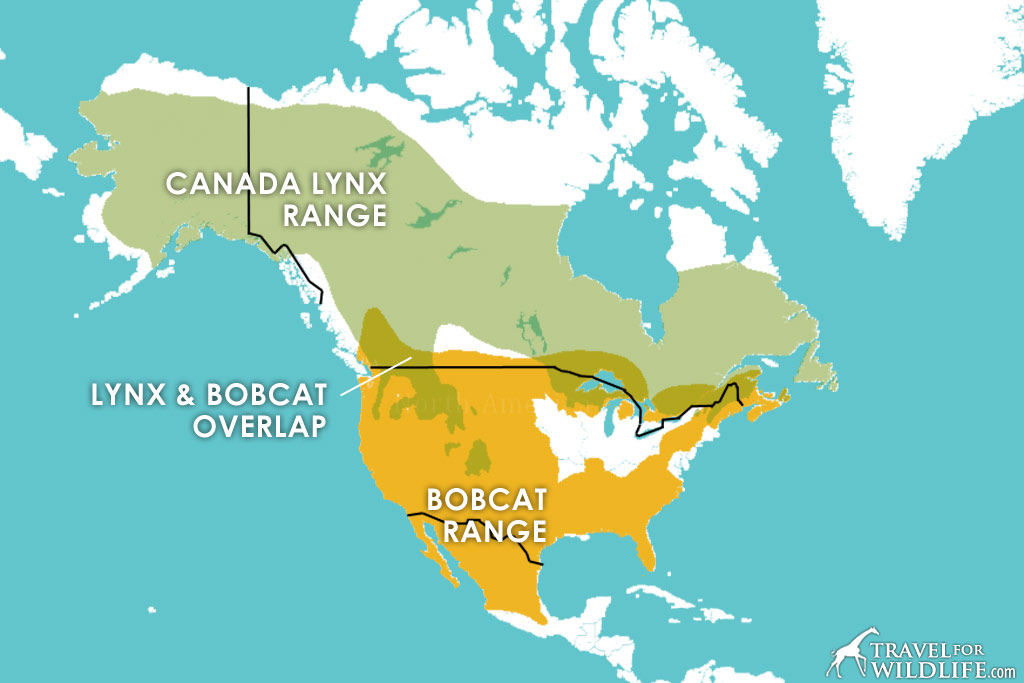 The two cats are pretty similar in size and appearance. It could easily have been either. That’s when I decided it was time for me to learn… 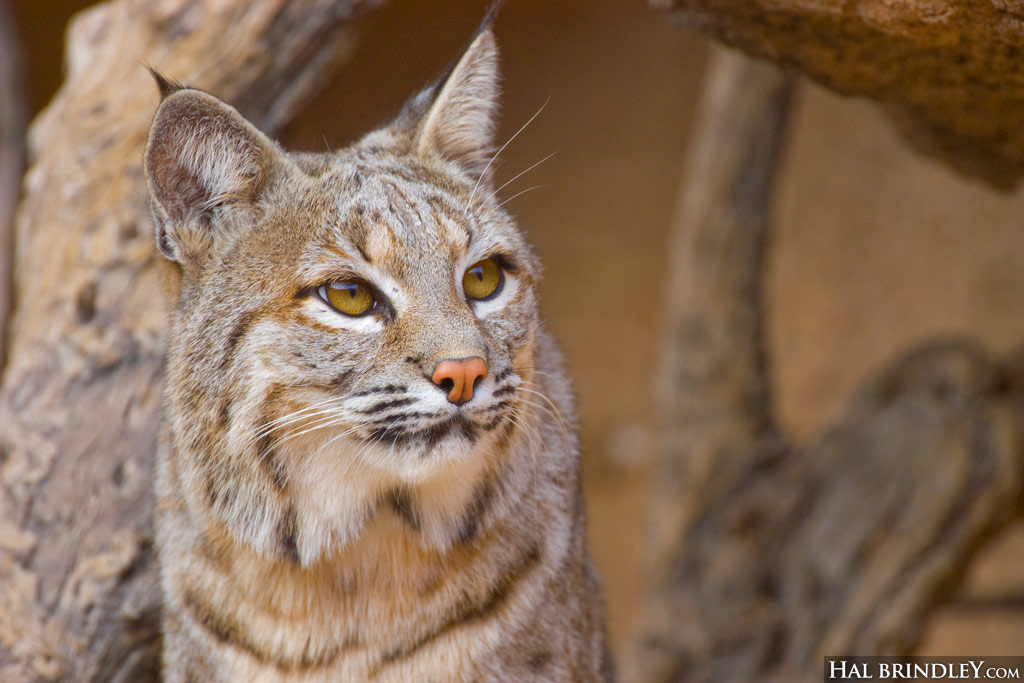 Hmm. Could it actually have been a bobcat? (Captive bobcat at Arizona-Sonora Desert Museum)

Is it a Bobcat or a Lynx?

I started to get a little nervous when I read that Lynx subsist almost entirely on snowshoe hare. Even though we did spot snowshoe hares in the area, the cat we observed was hunting birds! Watch our video to see birds barely escaping from the cat’s first two pounces.

But then I discovered that Canadian Lynx at the southern end of their range tend to have a more varied diet than their farther-north counterparts, which includes birds. Then I noticed how short the cat’s hair was. Most lynx photos show cats with luxuriously long winter coats and huge fluffy cheek tufts. But this was mid summer. So I convinced myself that it was simply wearing its summer coat.

Finally I found the definitive proof: tail color. Lynx have an entirely black tail tip, while the tip of a bobcat’s tail is black on top, and white on the bottom. Whew. So it was official. I had seen a lynx! 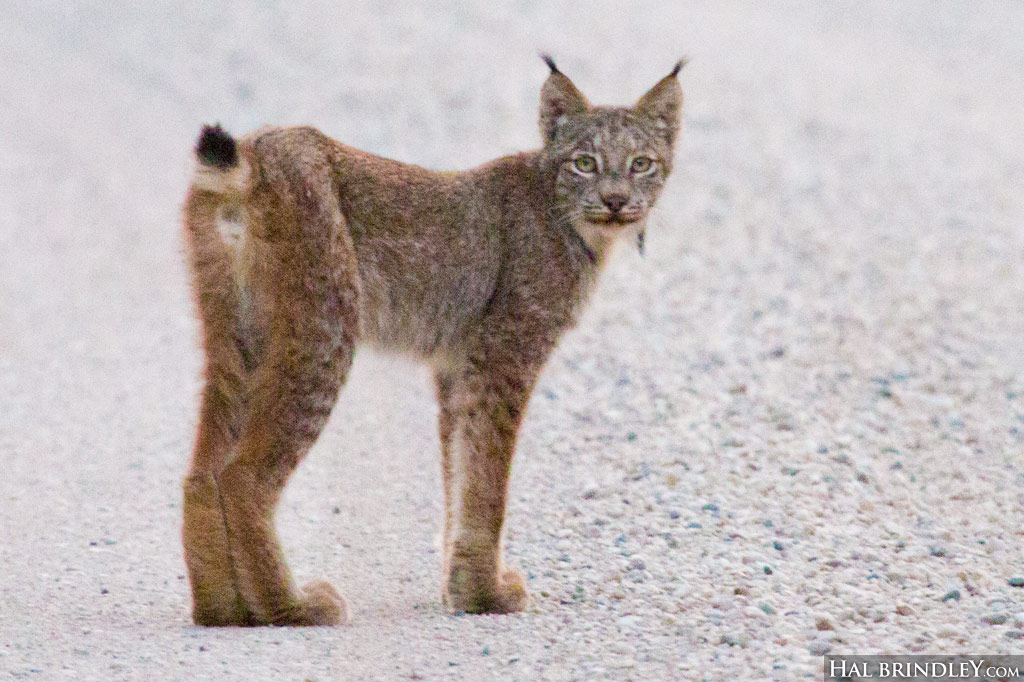 But wait. What about hybrids. After a little research I soon learned that there have been several documented cases of naturally occurring bobcat/lynx hybrids, showing intermittent features of both species. (source: Natural Resources Research Institute).

So in conclusion: who knows? Based on all the traits I’ve researched I feel pretty certain it’s a lynx. Check out the photos and decide for yourself. What do you think?

To help others in their quest to figure out whether they have seen a bobcat or a lynx, I’ve developed this guide:

The above photo compares the lynx vs bobcat. I photographed this wild Canada Lynx in Riding Mountain National Park, Manitoba, and this captive Bobcat in the Arizona-Sonora Desert Museum in Tucson, Arizona.

The table below is a list of the differences between a Canada Lynx and a Bobcat based on various physical traits and behaviors. You may be surprised to note that Bobcats can actually get much larger than Canada Lynx. On our list of the biggest cats in the world, you’ll see that Canada Lynx may reach up to about 26 pounds (12 kg) while the biggest bobcats may weigh up to 44 pounds! (20 kg).

Whether you’ve seen a lynx or a bobcat, consider yourself a very lucky person. North America’s wild cats are not easy to see!

We’ve received many messages from people telling us they’ve seen a big cat in their yards but didn’t have time to take a photo to identify it. Lynx or bobcat? Why not try putting a trail camera in your yard? We have two trail cameras in ours that we leave on day and night. We’ve had plenty of photos of our regular day visitors but also the nocturnal ones, like foxes, coyotes and opossums. We use [easyazon_link identifier=”B00W3JNMEM” locale=”US” tag=”traforwil-20″ cart=”n”]Bushnell Natureview HD[/easyazon_link] and we even take it on our camping trips. Maybe you’ll get lucky and catch a bobcat or a lynx!

The Biggest Cats in the World

How to tell the Difference Between Black and White Rhino

Possum vs Opossum: What’s the Difference? 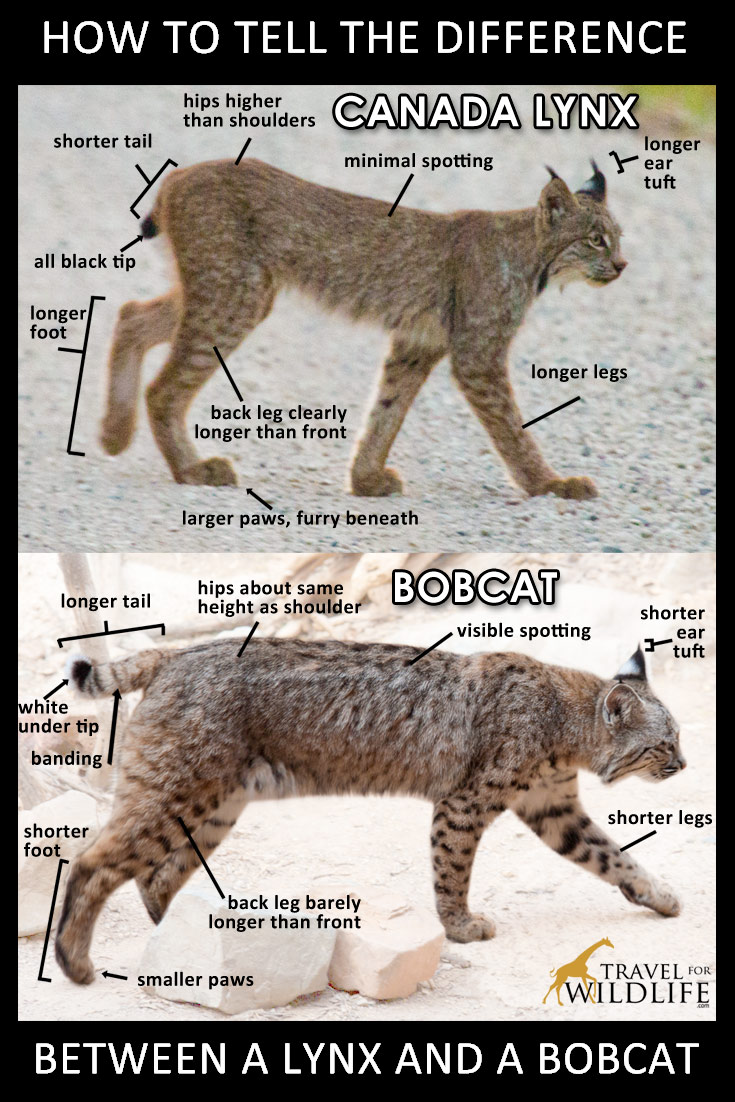 Have you ever seen a lynx or a bobcat? Let us know where in the comments below!