Photo: Caracal Kitten in the Kalahari

What a grand finale for our trip to Southern Africa. Our very first sighting ever of a Caracal! It was our last night in the Kalahari and we decided to take a final guided night drive. When the driver asked us what we were particularly interested in seeing, I thought to myself CARACAL, but was too embarrassed to say it aloud. After all, the chances of seeing one are ridiculously slim. After four trips to Africa and almost a year spent here in total, I still had never seen one. So instead we went to search for a pride of lions near the Leeuwdril waterhole. 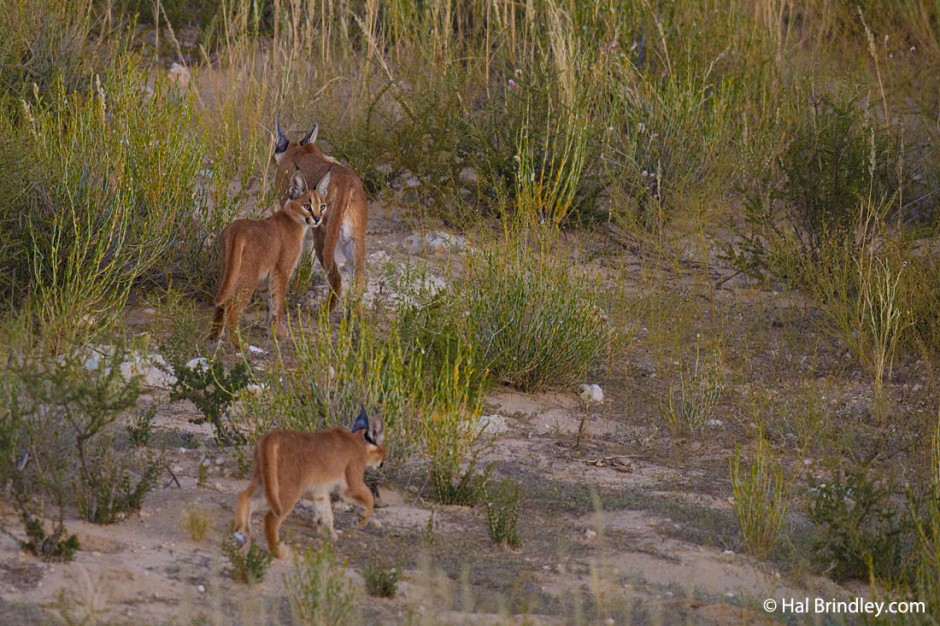 The sun had just set when Cristina jumped in her seat. The driver shouted, “Caracal!” and my heart stopped. I snatched up my camera with a 500mm lens and began to shoot, hand-held. In the dim light, it was unlikely I could get a useable shot but I fired the trigger anyway. Suddenly, a face appeared in the grass in front of me, peering between the stalks. It was a beautiful juvenile caracal, with a kitten’s face and elegant tall black ear tufts. It stared at us curiously for only three seconds then bounded off into the grass.

Cristina and the driver and I were gasping and swearing while the rest of the riders seemed to wonder what all the fuss was about. Then, further up the dune, the caracal reappeared, followed by another! And another! There were three! A mother with two kittens! She looked back at us with mild disinterest and led her youngsters over the rise. The final kitten jumped around crazily like there were firecrackers under its feet. Then they disappeared. It was pure magic and a moment I will never forget, a very rare sighting for our final night in Africa.