Searching for Ghosts, a Review of the Book “Unspotted”

Last week I was looking for a very specific kind of book to read. I wanted something that screamed safari, adventure, memoir, and wildlife. But every relevant title I had already read. I was about to give up when I opened my inbox and found an email asking if I’d like to review  Unspotted: One Man’s Obsessive Search for Africa’s Most Elusive Leopard

by Justin Fox. I thought, if the book is about leopards, I’m in!

I downloaded the book onto my kindle and got into bed with our 20-year-old cat Scamper. When he started to purr and dangled himself over my leg like a leopard on a tree branch, I knew it was a good sign.

The author, Justin Fox, is visiting the Cederberg in an attempt to spot one of the wild leopards that live in the area. If you visit one of South Africa’s national parks like Kruger, it is entirely possible that you’ll see a leopard or two. But outside these fenced parks, spotting one is extremely difficult, bordering on impossible. You have to be very, very lucky (we were very lucky indeed when we had just such a leopard encounter in Namibia). Leopards are elusive, shy, and masters of disguise. They are ghosts.

So to have a better chance of finding his leopard, Justin joins Dr. Quinton Martins, the founder of the Cape Leopard Trust, a predator-conservation trust with the goal of preserving the entire Cape Mountain ecosystem. He follows him during his daily research, checking traps and chasing leopard shadows across the mountainous terrain of the Cederberg.

Getting a glimpse of one of the project’s collared leopards should be easy in theory, using radio telemetry to track them. But the reality is that leopards, even with a radio collar,  have learned to disappear and become invisible. Justin and Quinton move around this wilderness with only one mission, to spot the spotted one. Beautiful descriptions of their hikes and the characters they meet along the way are so vivid that I felt as if I was on the research team. My lazy legs burned as I read the passages about challenging hikes and my  zoologist brain cheered when they encountered leopard poop, which is the next best thing to a leopard. “It’s difficult for lay people to fathom the excitement scat induces in zoologists,” says the author. Yep, I get concerned looks about this all the time.

The only thing that I didn’t like about the book was the length. I found it a bit too short (I read it in under an hour). I was enjoying it so much that I didn’t want it to end so soon. 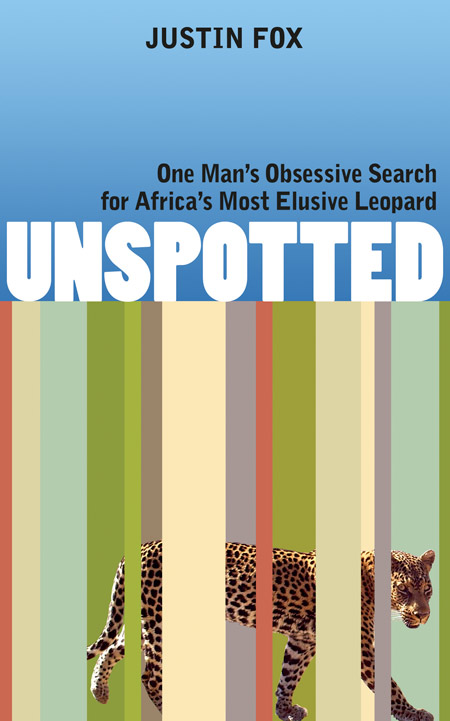 Cover of Unspotted, by Justin Fox

Reading this fantastic short story has been a great way for me to discover a new author that writes about safari road trips and African wildlife, two of my favorite genres. Justin Fox is a renowned South African travel writer, novelist, and photographer. He has written scripts, directed award-winning documentaries, and is a two-time Mondi journalism award winner (1999 and 2004).

Here are some of his other titles that just went on my to-read list:

: An epic journey around South Africa. While skipping entire cities to favor the off-the-beaten-path treasures, outposts and small towns, he discovers characters fashioned less by convention than by their own battles against nature or circumstance. This title was long-listed for the 2011 Alan Paton Award for non-fiction.

– The Impossible Five: In search of South Africa’s most elusive mammals

To learn more about the Cape Leopard Trust, watch this video.