Cristina was sitting in her favorite chair thumbing through a small book titled Sri Lankan Wildlife. She was fantasizing about her upcoming journey to TBC Asia which included a five day pre-conference tour of Sri Lanka hosted by Cinnamon Hotels. The highlight would be two nights at Yala National Park, one of the world’s best places to see leopards. 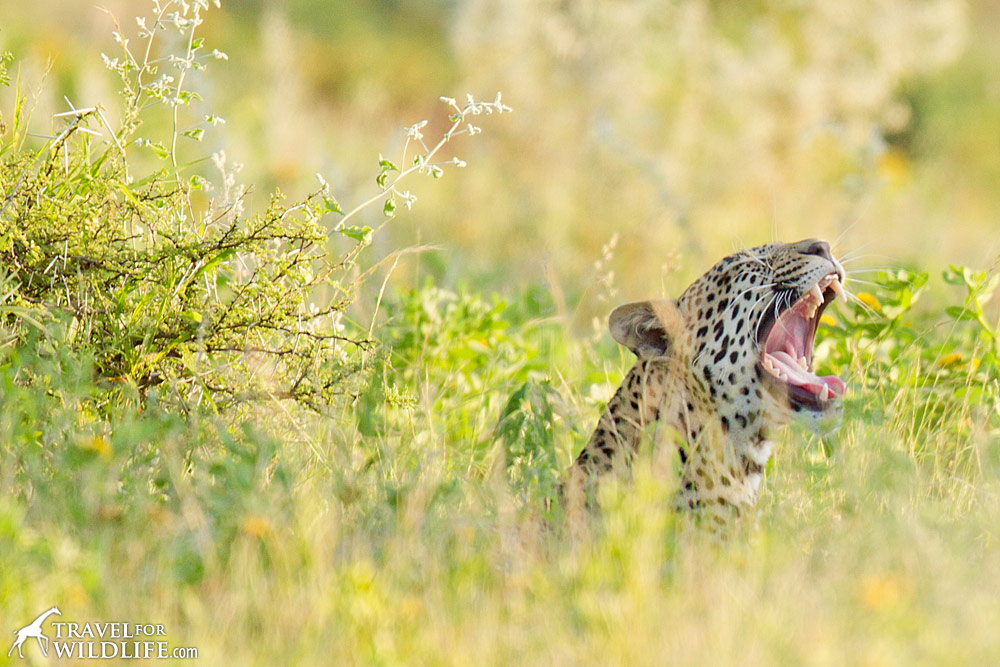 Yala National Park in Sri Lanka is one of the best places in the world to see a Leopard. (This one however was photographed in Namibia.)

I could tell she was anxious by the way she was picking her lip. The idea of coming face to face with a wild leopard didn’t frighten her at all. She wanted that more than anything in the world. I knew she was far more terrified of the prospect of standing up in front of a large crowd at the international Travel Bloggers Conference if by some chance she had to accept an award.

Four yeas ago, Cristina started Travel For Wildlife with the simple goal of supporting wildlife conservation by promoting responsible wildlife tourism. Now her little website was nominated as one of the top three Responsible Tourism Blogs in the world.

It was now only two days from departure when she looked at me over the top of her book and I noticed the hint of a tear gathering in the corner of her eye.

“I can’t go,” she said as she set the book in her lap. Tears of relief began to fall immediately from my own eyes. We both looked down at the small gray and white cat curled up next to me on the couch on a soft blanket. Our beautiful 20-year-old kitty Scamper looked back at us and blinked a slow sleepy smile. Earlier that day the vet determined that the cancer in his eye had spread and was growing aggressively. He only had days to live.

It was not a hard decision for Cristina. Ever since she was a little girl she put other living things first, from the tiniest insect to the most magnificent pine tree and everything in between. She knew she had to be here for Scamper in his last days, and for me who would be destroyed by his passing. Sometimes the most responsible travel is to not travel at all. 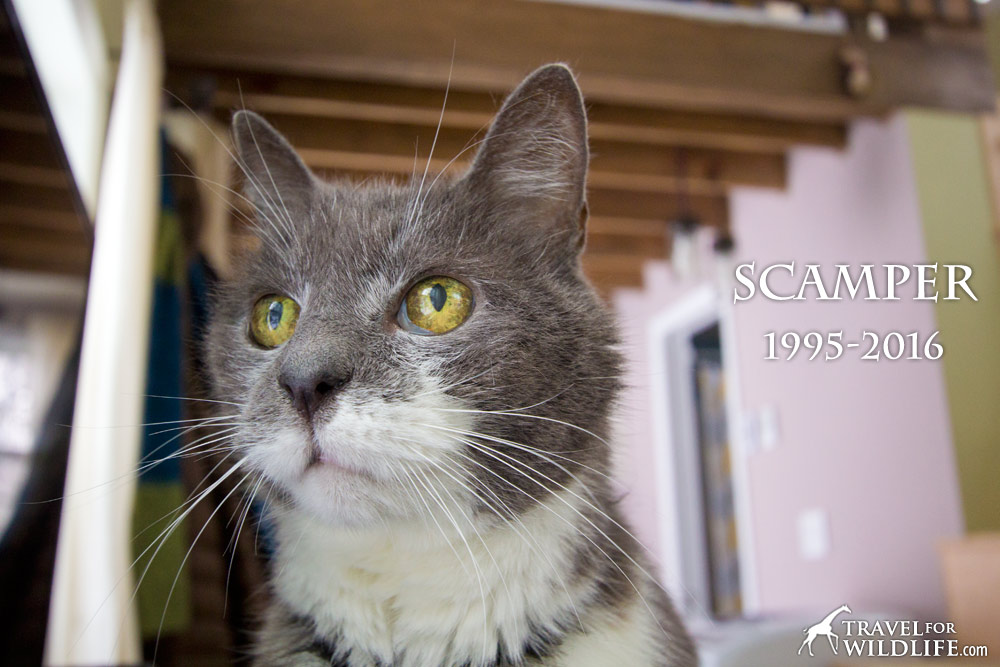 Our amazing kitty Scamper. I miss you so much little boy.

Eight days later we were camping in the Smoky Mountains, still deep in our grief over the loss of our little boy, when Cristina screamed and looked up from her phone. Matt Gibson, president of the Professional Travel Bloggers Association, had sent a photo through Facebook. To our great shock, Travel For Wildlife had won first place, the Gold Winner for Best Responsible Tourism Blog. 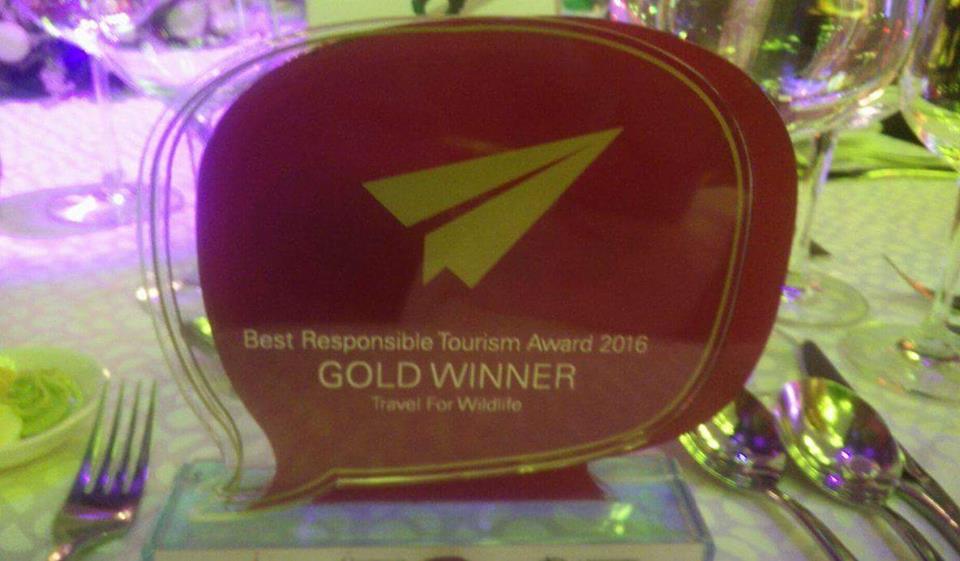 Cristina’s award sitting on a table at the award ceremony in Sri Lanka (photo snapped on the phone of Matt Gibson, president of the Professional Travel Bloggers Association.)

Though Cristina was incredulous, a part of me was not surprised at all. If anyone deserved this win, it was her. Every day she makes her decisions based on what would be best for the wildlife in our own yard and around the world.

I know she would say this is OUR win, because I do a lot of work on the site too and together we are a great team. But the truth is, she has always been the heart and soul of Travel For Wildlife, the passionate driving force, and the compassionate voice of the animals who can’t speak for themselves.

You deserve this win Cristina. I’m so proud of you. (And of us!) Here’s to many more years of traveling for wildlife and doing our best to make a difference. 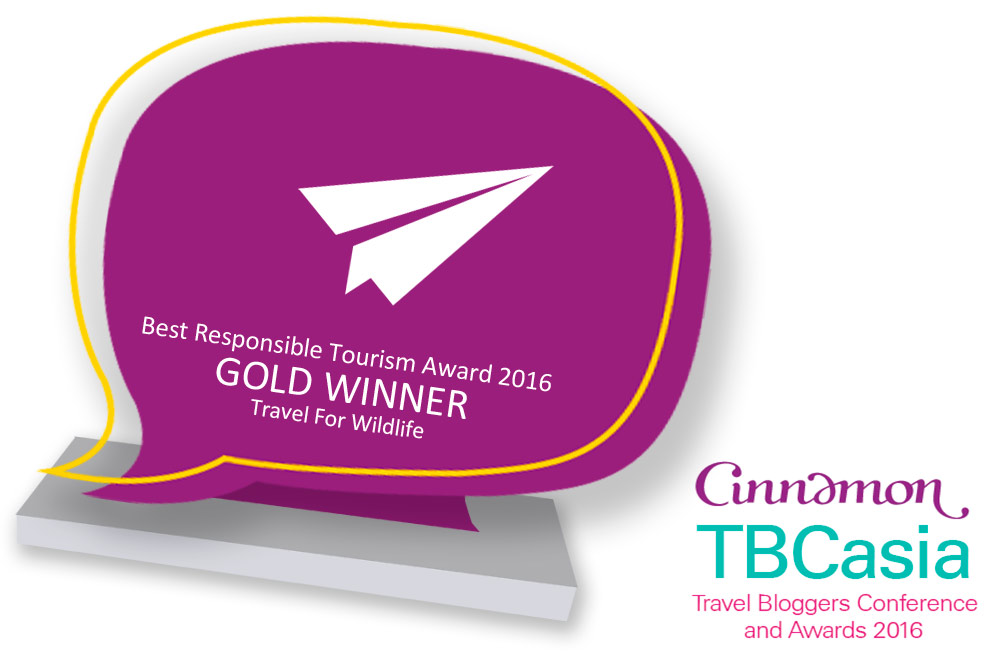 Check out other awards we’ve won on the Travel For Wildlife Awards Page!