Our 10 Favorite Wildlife Encounters of 2012

As we prepare for a new year filled with great wildlife encounters, we take a moment to look back and recap our favorite wild adventures of 2012.

These are in no particular order as I am not sure we could pick a winner! Each was amazing in its own way. We hope you become inspired by them and embark on your own wild adventures this year.

1.- Swimming With Manatees in Florida 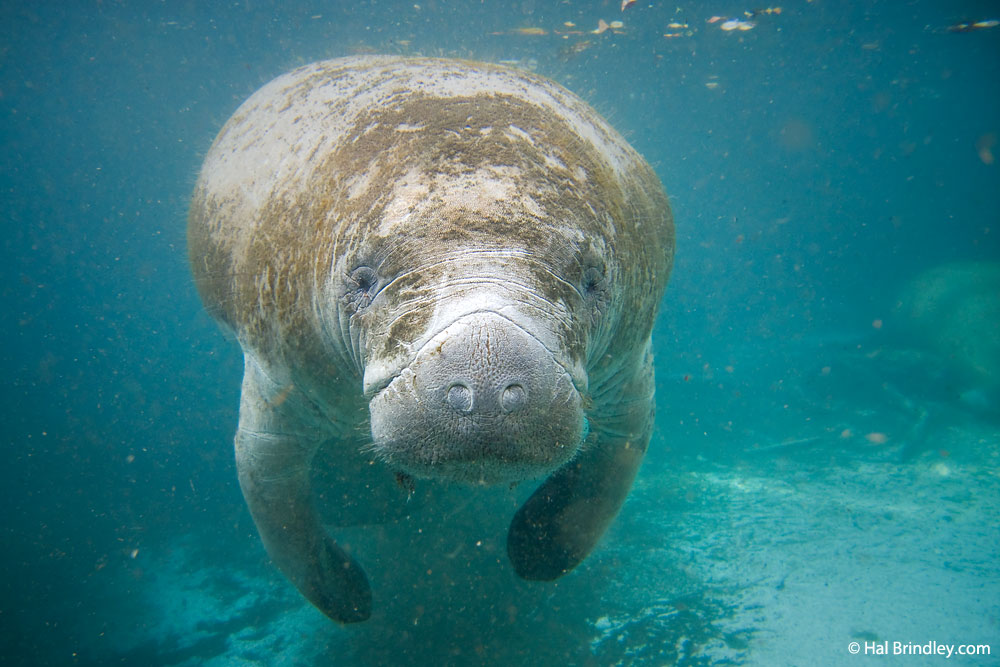 Swimming with Florida Manatees in the Three Sisters Spring.

Where else can you float peacefully as a thousand-pound wild animal approaches you and kisses you on the face? Crystal River provides a unique opportunity to interact with the endangered West Indian Manatee. This year we watched babies nursing, got a close up view of amazing manatee lips, and got “hugged” by some very friendly individuals. There is nothing quite like it in the world. As usual we stayed at the Port Hotel and kayaked out to visit the manatees. The combination of low cost do-it-yourself wildlife watching, and the ability to actually interact with a huge and gentle wild animal, makes visiting Crystal River one of my all time favorite experiences. -Hal 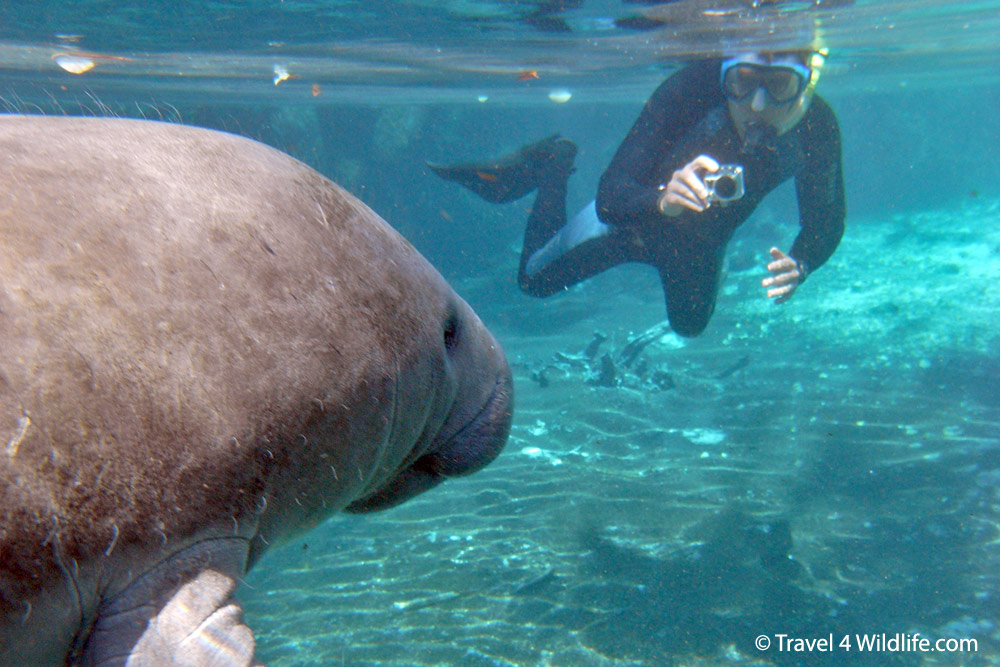 2.- Kayaking With Seals in Namibia

It was a dark foggy morning on the coast of Namibia as we rode in a bouncing 4×4 across rutted sand tracks out to Pelican Point. We put our kayaks in and paddled out as the sun began to rise. We heard a strange ruckus in the distance, a thousand barks and grunts. As the fog lifted, dark shapes began to appear in the clear water beside us, leaping and frolicking: Fur Seals! We paddled closer to the colony, a mass of bodies huddled together on a naked beach, and the more curious individuals swarmed around us. As the youngsters grew bolder, we began to wonder if one might leap directly into our kayak! Watching the energetic antics of little fur seals has to be one of the most entertaining wildlife spectacles in the world. -Hal

3.- Swimming With Sea Turtles and Watching Hatchlings Go to Sea in Mexico 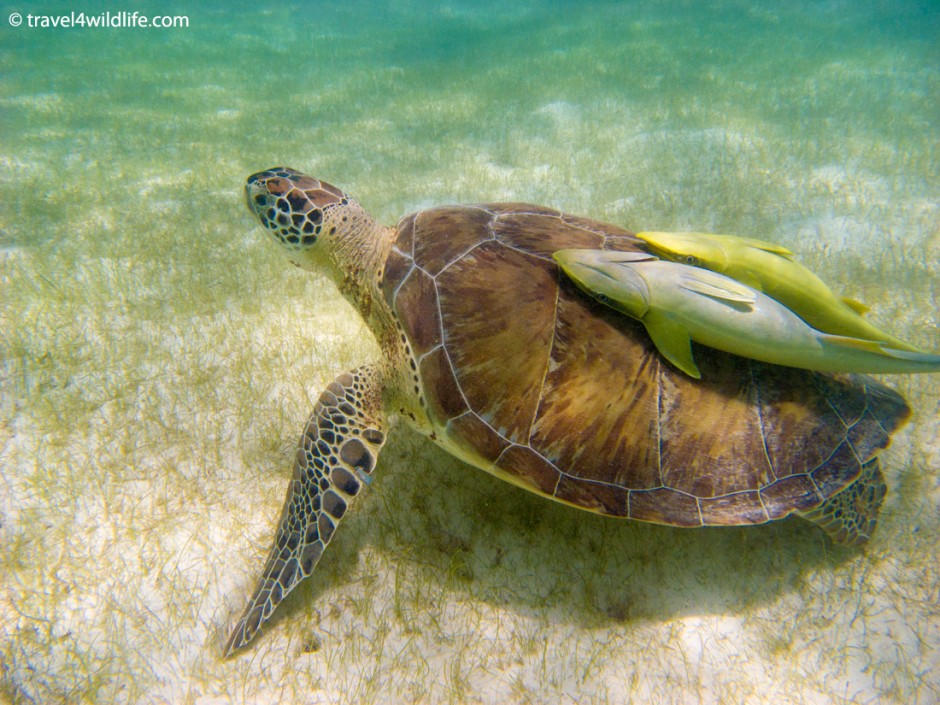 Green Sea Turtle with remoras on its back

This is something I wasn’t expecting from our trip to Mexico this summer. We traveled to the Yucatan Peninsula to swim with whale sharks but a friend of mine told me that we could also swim with wild turtles in the town of Akumal. Sea turtles come to the bay of Akumal during the day to feed on the sea grass. We went out two days in a row and swam with dozens of these amazing creatures.

Not far from Akumal, just south of Tulum, we witnessed something I would never have dreamed of. It was our last night in Mexico and we were strolling on the beach when we came across a sea turtle nest. And baby turtles were hatching! We saw them crawling to sea for the first time. It was a moving sight; tears rolled as the little guys swam for the first time. – Cristina

What a treat for the last night of our 7-week safari trip to South Africa and Namibia. We were on a guided sunset drive in the Kgalagadi Transfontier Park in South Africa when a reddish shape appeared in the road in front of us. We couldn’t believe our eyes when we realized it was a caracal followed by her two cubs. It was our first caracal sighting EVER! Caracals are not easy to see as they tend to be very secretive but this family gave us a great show and made sure our trip ended with a bang. – Cristina

I couldn’t really imagine what it would be like to swim in open ocean next to the world’s biggest shark, but I wanted to find out. We traveled to Holbox Island in Mexico and went on a whale shark tour. Out in the clear blue water we found them, feeding in a huge congregation. We donned our snorkels and slipped in, instantly surround by fish the size of school buses. As the first one slowly drifted by, I looked into its huge gaping mouth and realized I could fit comfortably inside it. Thankfully, they are only interested in tiny fish eggs which they vacuum up the thousands. My most incredible moment was also one of my scariest, when an individual decided to dive directly under me and pushed me to the surface with his massive body.  -Hal

The Alligator River NWR is another one of our yearly trips. I always believe we will see a red wolf, but with only 100 left in the wild, seeing a red wolf would be either a miracle or a mirage. But that’s OK, no worry if you don’t see a red wolf in the Alligator River because you can be sure the black bears will put on a show for you. We visited in July and went on a black bear tour. We couldn’t believe our eyes when we saw three tiny cubs running across a field. – Cristina

7.-  Being Chased by Lions in Namibia

This year in Africa I developed a new-found respect for lions. Many times we have watched them lazing about for hours on end, doing very little of interest, though occasionally in the night we would hear a hair-raising roar. However, one evening this March was very different. We were in Namibia’s Etosha National Park, the last ones on the road to the Chudob water hole when suddenly a lion strode down the road toward our tiny rental car. Then another, and another, until we were surrounded by a pride of eleven lions. There were five large cubs and they began to jump around crazily, running and tackling each other with fierce exuberance. Then they turned their attention to us, hiding behind trees and peering into our windows as if sizing us up. I feared one might actually dive into our car so we rolled up the windows and wondered if they might still be able to break in. 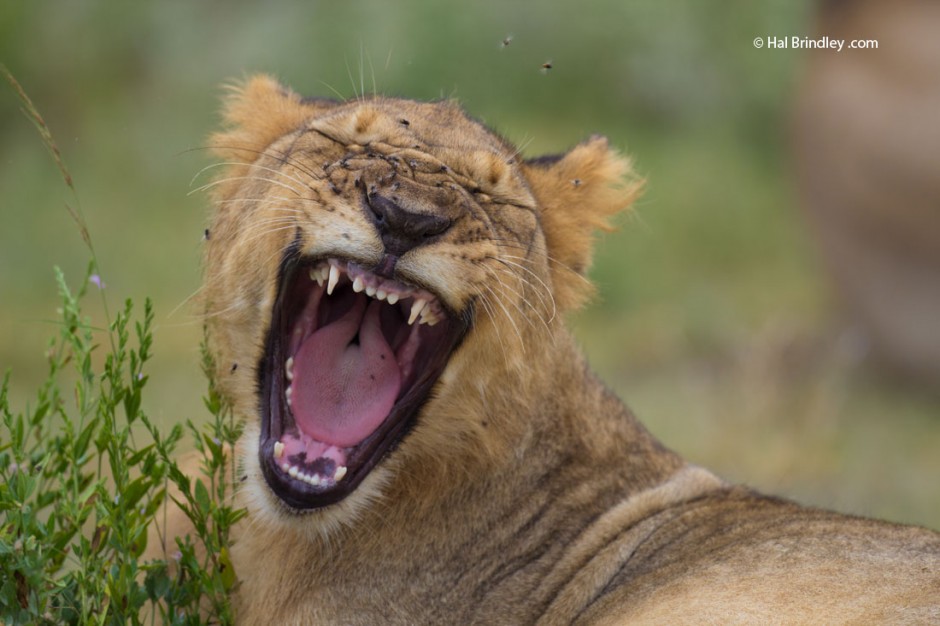 These cute lion cubs turned a bit frightening at sunset.

As I was trying to figure out a way to get past them and return to camp, the biggest most powerful lioness strolled into the road and blocked our car with her finely muscled body. She turned her head and looked directly into our eyes and clearly said, You aren’t going anywhere until we are finished with you. A cold chill passed down my spine and for the very first time in my life I felt the cold and paralyzing terror of being prey. It was a moment I will never forget. I managed to creep around her and hit the gas. In the rear view mirror I witnessed the incredible image of eleven lions chasing us down the road as if we were in a bad monster movie. -Hal

I’ve loved vultures since I was a kid so it was a great treat for me to watch them in action in Etosha National Park. Lions were making zebra kills every night so during the day, great hordes of vultures would descend upon the carcasses and clean up. On several occasions we were able to watch from just a few yards away. It was mesmerizingly morbid and incredibly fascinating. Their frenetic movements and incessant primeval screams were so enthralling I could have watched them for hours. With the help of a few hyenas and jackals, they were able to reduce an entire zebra carcass to bare dirt within a mere 14 hours; bones, hair and all. -Hal 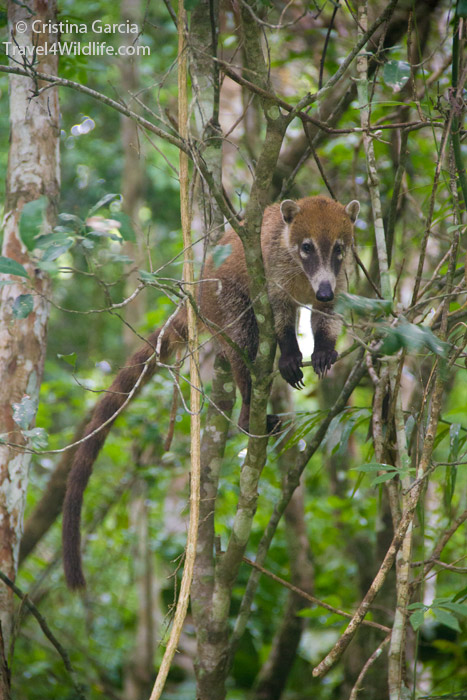 A coati in the Calakmul Biosphere Reserve

9.- Following a Troop of Coatis in the Jungles of Calakmul, Mexico

Driving down the road to the Maya ruins of Calakmul we noticed that leaves and twigs were falling from the trees over the road. “Who is doing that?“ I asked Hal. We stopped the car and found the culprits, a troop of coatis foraging in the trees and on the ground. We decided to get out of the car and try to take some photos. It turned out they were very tame and didn’t mind us getting a little closer than most wildlife would tolerate. In fact they seemed quite curious about us. We stayed with them for a while, as they moved around the forest floor, foraging and playing (click here to play video). – Cristina

10.- Hearing an Elk Bugle for the First Time in The Smoky Mountains in North Carolina

Hal had just come back from Las Vegas where he did a wildlife road trip to North West Arizona. When he came back he showed me some footage he took at night. It was pitch black but there was the sound of a bugling elk in the background. It was one of the weirdest sounds I had ever heard. Determined to hear that sound for myself we visited the Smoky Mountains where a herd of reintroduced elk roam free. We had visited before (we only live 30min away) but this was our first visit during rut season. We were rewarded with the eerie sounds of many large bull elk bugling. I can’t wait for next season! – Cristina

What was one of your favorite wildlife encounters this year?