Our New Neighbor, the Mantis

I am always looking for animals. Big animals. So sometimes I feel like I am neglecting the little guys. Then this little guy appeared on our deck. 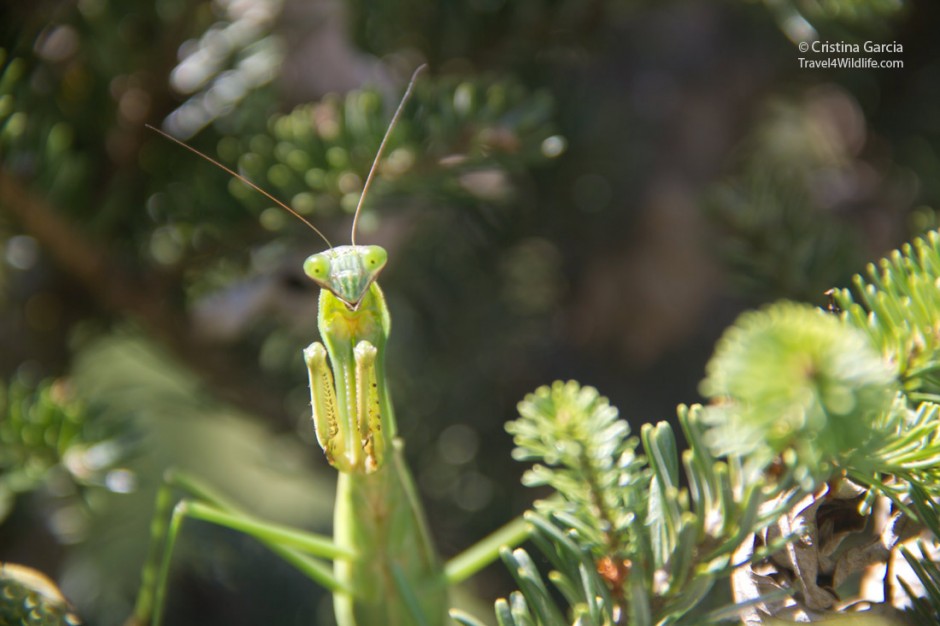 Actually it was a girl: a female Chinese Mantis. Female mantises are larger than males. This one in particular was huge, about four inches long (10cm). I didn’t have a male to compare it to but according to our guide book, the female’s abdomen is thick and has 6 segments. Males have 8 segments. Luckily, I can count. 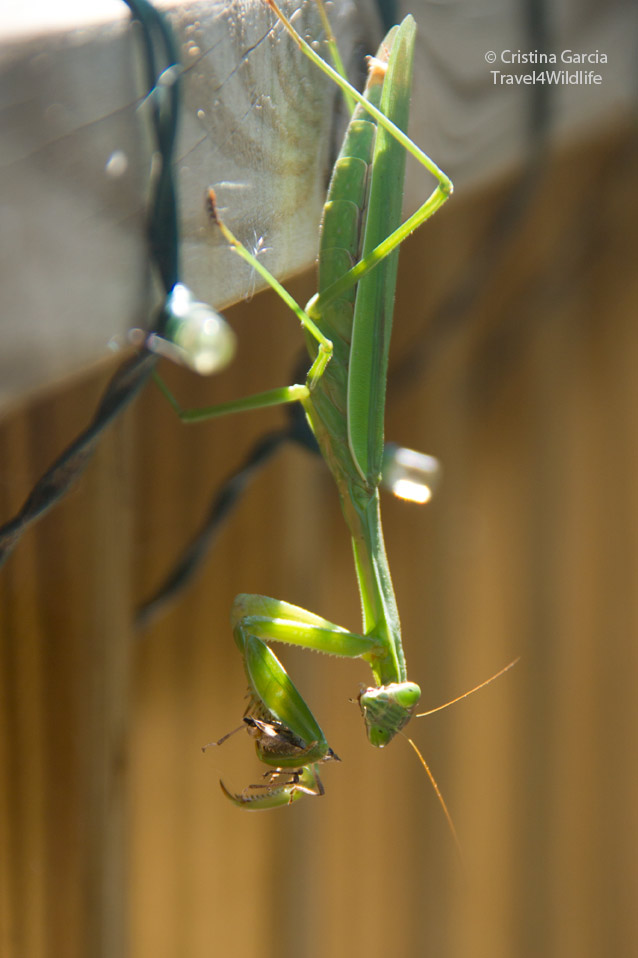 Chinese Mantises were introduced in the U.S. as a biological control for pests. Since then, they have become very common here. You can identify a Chinese Mantis by looking at the spot between their forelegs. If it is yellow, it is a Chinese mantis. Also they are the largest species of mantis that occurs in the U.S. 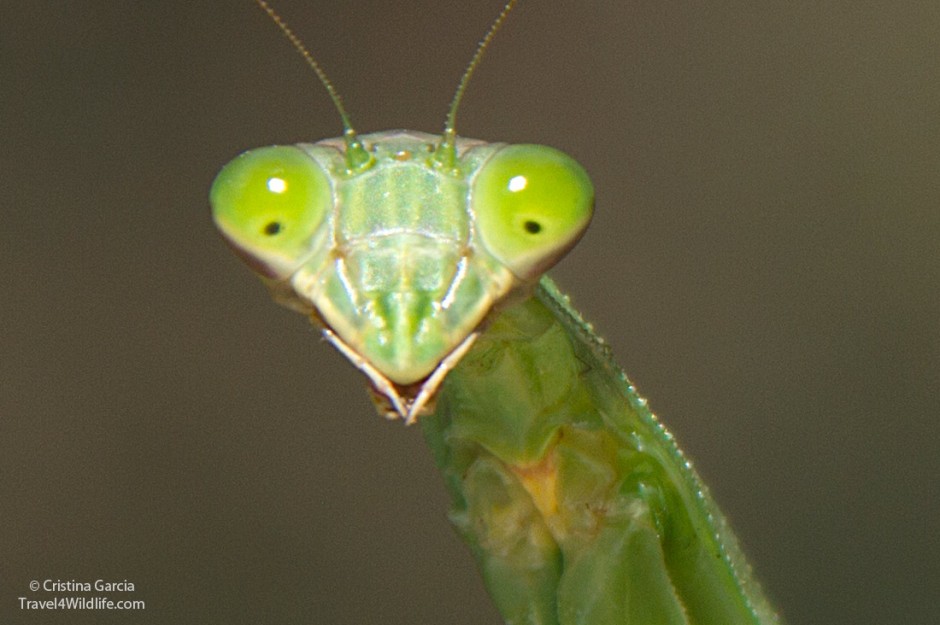 When she first saw me, she pooped herself. I almost pooped myself when I saw her, too. She was as big as my palm and I bet she would love to chomp on my nose or one of my toes. I put my closed-toed shoes on, grabbed the camera and closed the door behind me. I really didn’t want her in the house. 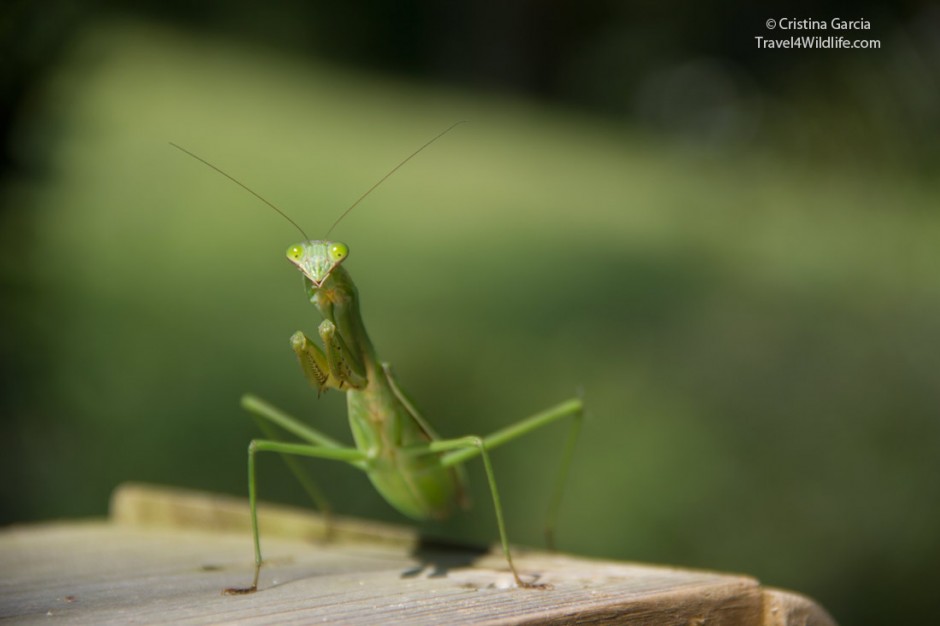 Chinese mantis on my deck railing

Leaving her poop behind, she walked along our deck rail until she reached our Christmas tree. We said we would plant it in the yard after the holidays. It is September now and it is still growing happily in a pot on our deck. We have waited for so long that now it is officially our Christmas tree for this year too. 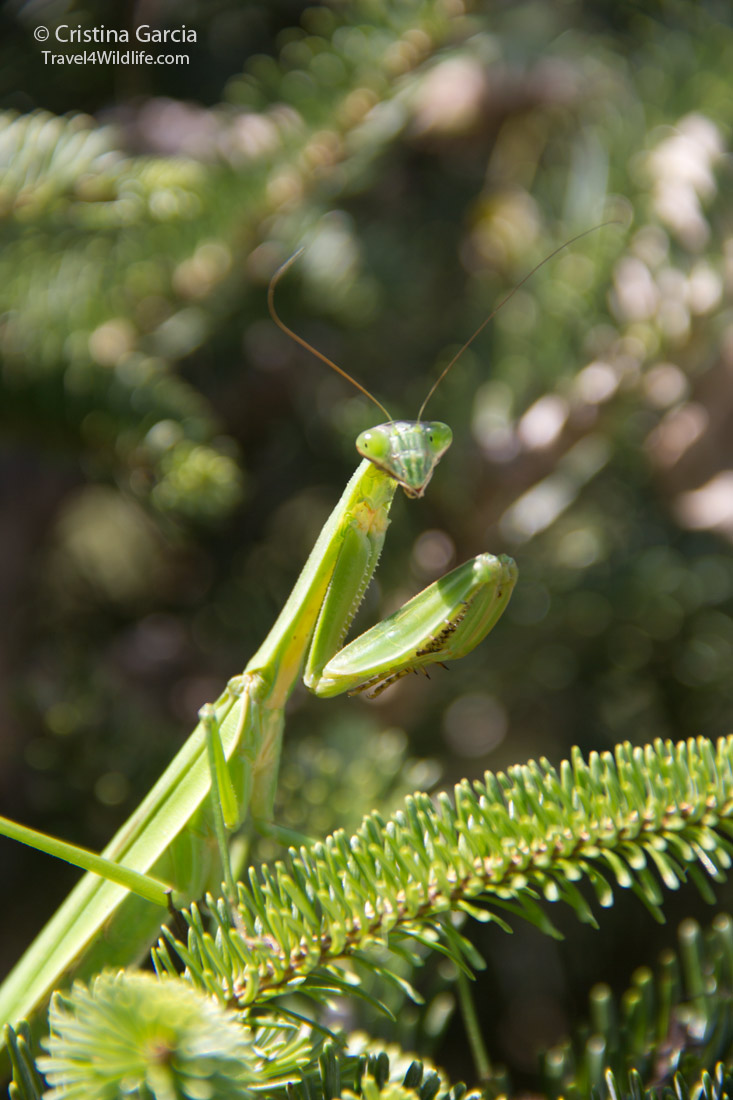 Mantis on our Christmas tree

Don’t you wish your girlfriend was hot like her?

Don’t cha? Come on, look at her. That shiny green skin, those long legs. Of course, she might eat you when she’s done with you. 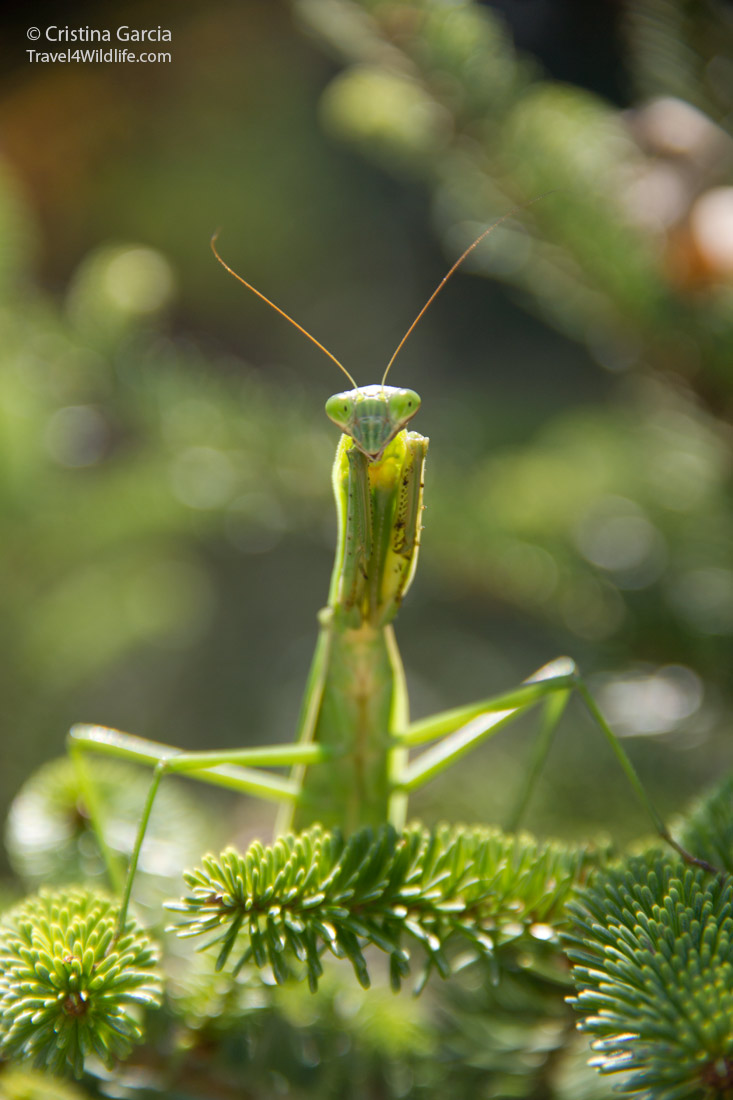 Are you sure she won’t eat you?

Praying mantises have a reputation for eating their mates during mating. It’s not as bad as they say. Some of the males are spared. The trick is to change the female’s way of thinking. They are always thinking about food (chocolate, anyone?),  so males have to invest some time in courtship before approaching too closely. They need some distractions and a courtship dance is the key.

No courtship? I eat you.

She will lay an egg mass, called an ootheca, with up to 400 eggs. The nymphs are mini versions of the adult mantis with the exception that they have no wings. These nymphs molt their flexible exoskeleton as they grow, it is with the last molting that they get their wings.

This particular mantis stayed at our deck for about an hour. During that time I watched her eat three stinkbugs. I never saw her catching one, but my guess is that she stole them from the spider webs surrounding our deck. I could be wrong. I just want to think she didn’t really hunt these guys cause I missed the action. In between her meals, she would stay in a praying position. She would disguise herself in between the pine needles by standing still. Sometimes I couldn’t find her because she blended in so well!

I put together the following video of all the footage I took of her. You can see her walking on our deck, eating a stinkbug and trying to disguise herself in our Christmas tree.

When she caught a stinkbug she would grasp it with her spiked forelegs. Their grasp is so good that they have even been seen catching small birds like hummingbirds. Now, that is crazy to me. 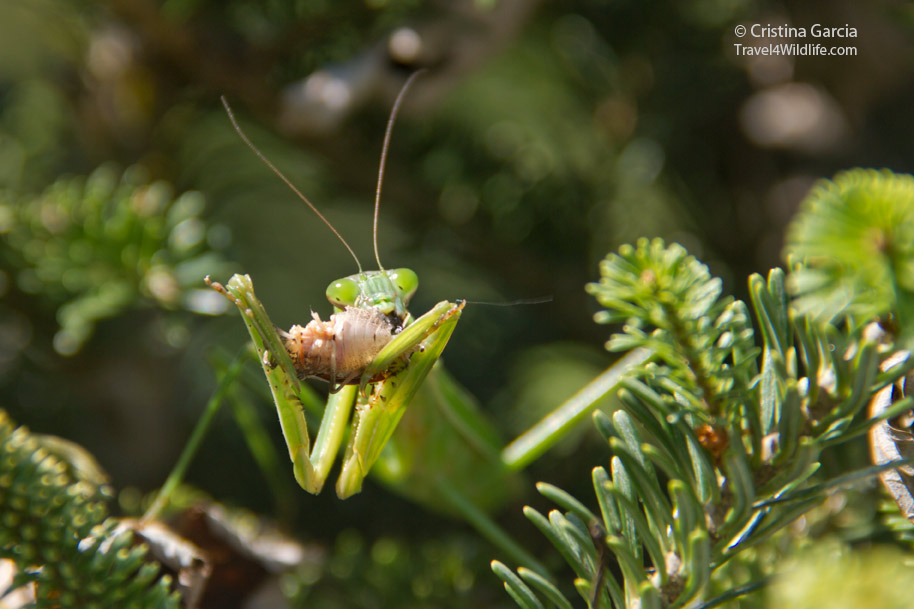 I believe she is living in our Christmas tree, and now, every time I go out on the deck I look for her. I hope she leaves us with an egg case so next spring we can have more mantises to keep our stinkbug population in control.