Our Week in Kruger, Part 1 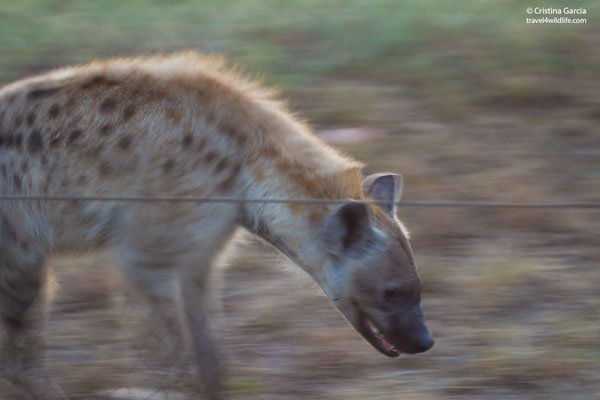 Our plan for Kruger was simple. We took a week to drive the whole park length from south to north. That is one week to drive 350km (220miles). We didn’t know what to expect, there had been devastating floods just a month earlier, some camps were closed and some roads hadn’t been opened yet. Some of the bridges still showed the scars of the flood. 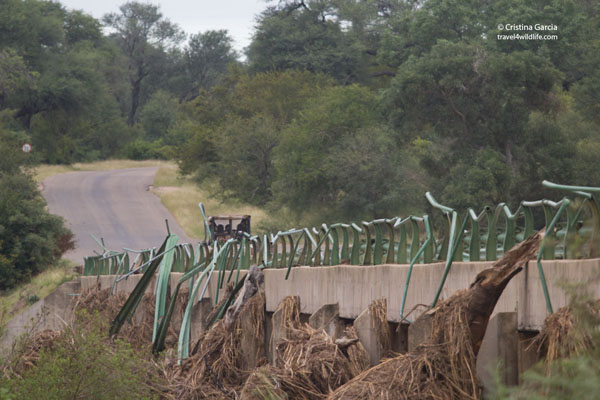 My goal was to see the African painted dog and leopards, lots of them. A cheetah would be awesome too. Lions…I am not bothered about lions. They do nothing all day. Sure they are beautiful and iconic and all that but, seriously, if you want to have a boring afternoon, go and hang out with lions. Another animal I had no interest in seeing was baboons. They scare the hell out of me. With those piercing eyes and huge fangs.

Our first campsite was Berg-en-Dal in the south end of the park. We were excited to get  a spot for our tent by the fence where we placed our camera trap. Fences here are just chain link with some electric wires to make it safer against predators. So, anybody that would walk around the fence would be caught by our camera. I was hoping to get a leopard or painted dogs or even a lion would do in this case. It is exciting to know these big predators walk around you while you are sleeping. And kind of scary. 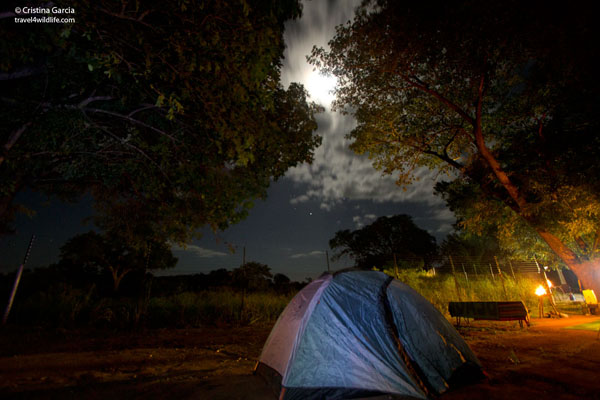 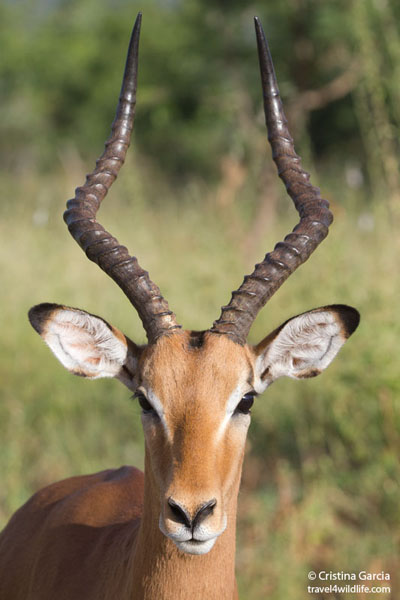 Having stayed only one night at Berg-en-Dal and then one in Skukuza camp we decided to stay for two nights in the center of the park, in Satara camp. That would give us time to rest from all the driving and a chance to hang around one place. And we were told that around Satara it is the best place to spot a cheetah.

We hurried to get a site by the fence. We didn’t have to wait until nightfall to find some visitors. We were  setting up the tent when we turned around and saw that a spotted hyaena was already patrolling the perimeter of the fence. She was checking us out, to see if we had any scraps for her.

Spotted hyaena by the fence

Hal shot this video as the sun was setting. As you can see, they are dangerously tame. 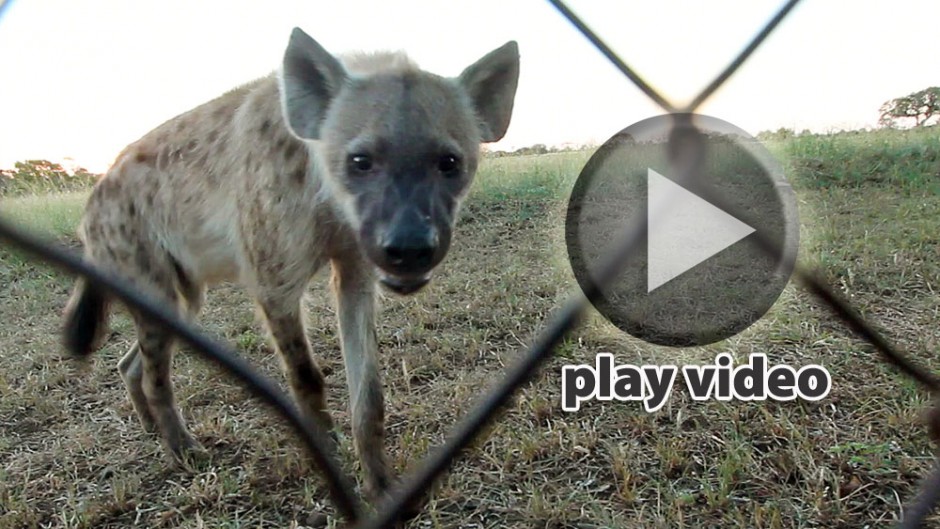 Hyena at the fence in Kruger National Park, South Africa 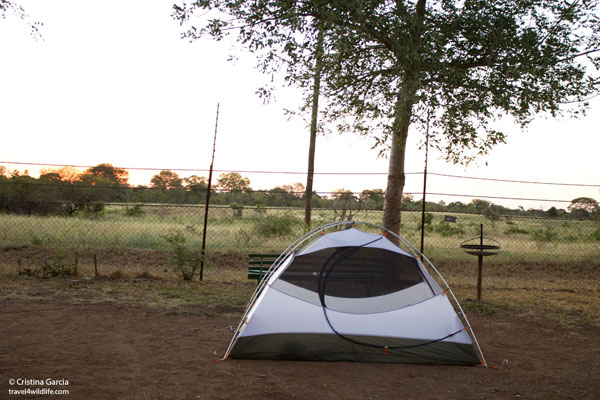 Camping spot at Satara by the fence

At this point I should add that it is illegal to feed any kind of wildlife and you will get a fine if caught doing so. It is dangerous for both people and animals. If the animals associate people with food, they become beggars and may even become aggressive. These animals have to be killed to avoid any conflict with people. 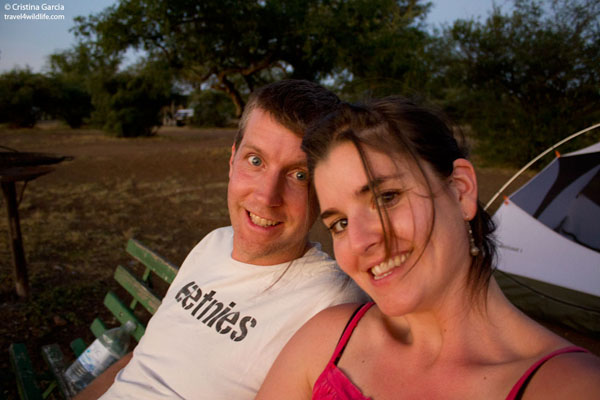 We had an unexpected visitor at night. An African wild cat, walked around our tent. Yes, it looks like a house cat, but you never see these guys, unless you go for a night drive or in the very early hours. We were surprised and amazed to know that it had been walking just a few feet from our sleepy heads. 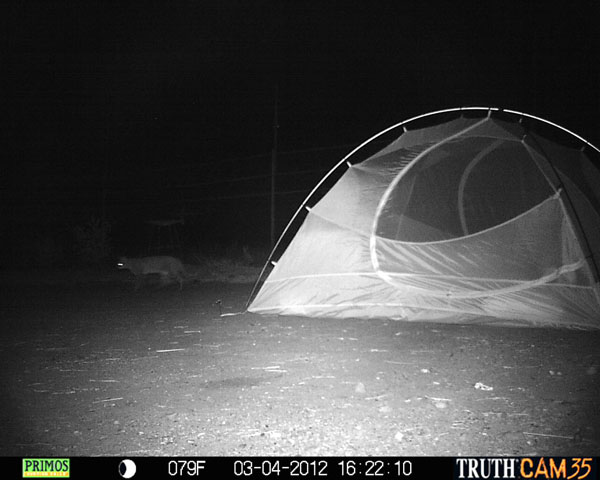 African wild cat by the tent

Next morning we also found the smallest owl in Southern Africa sleeping on a palm plant by the restaurant. We later learnt that it actually comes back to the same plant every morning. 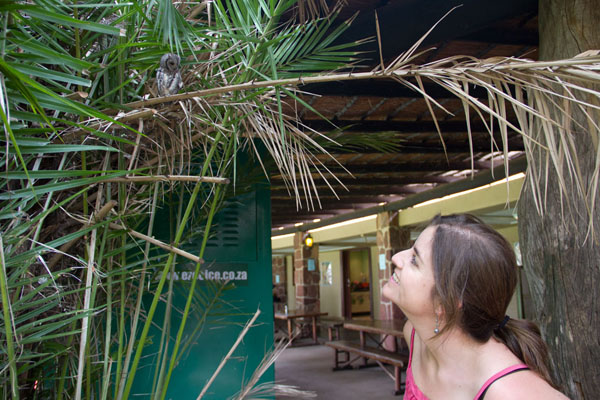 What else can you ask for? You don’t even have to go for a drive, wildlife actually comes to see you.

Even on this side of the  fence.

Read Our Week in Kruger, Part 2