Elephant Talk; Mine is Bigger Than Yours 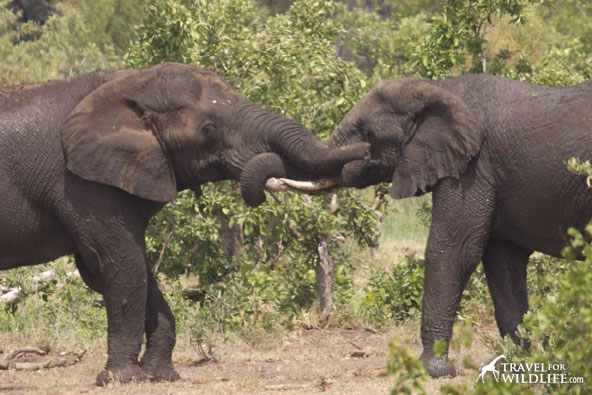 To me, going on a safari drive is not just a race to see as many animals as possible, then take a photo and leave. When we find an animal, we like to observe its behavior and get a sense of how it lives its life. So we turn off the car and watch. Sometimes we sit with an animal for hours and we never get tired of it. There is always something new to learn. For example, how do elephants talk?

Last year when we were visiting Kruger National Park in South Africa, we came across a group of elephants. Nothing was out of the ordinary, they were browsing some acacia trees. It was a beautiful sight. Then two individuals came face to face, they lifted their heads and intertwined their tusks and trunks. It seemed like they were checking each other out. And they were! We were witnessing how elephants assert dominance! Here is how they did it.

Photo sequence of how elephants assert dominance, measuring each others tusks.

In this case, contact was made on the underside of their raised trunks, but it may also be made with tops of the trunks, as each bull attempts to hold its head as high as possible and press downward on the other. If you look closely you’ll see that they are actually measuring the size of each other’s tusks with their trunks.

Elephant dominance is largely a matter of size and seniority. Young elephants learn their status and strength within different age classes through play fights. Dominance is asserted and acknowledged when two bulls meet. When the size difference is obvious, the smaller one keeps his head lowered, flatten his ears and moves backwards and sideways. The one that stands taller with his head high and ears spread is the dominant one.

When size difference is not so obvious then they measure each other. Just like the guys in Kruger did. In this case, it was all very civil, but when two bulls are in musth and there is a female in heat, things can get serious.

After their encounter, the elephant on the right took a step back and moved around and to the side of the dominant male. Both left the scene peacefully.

After the larger bull asserts dominance, the smaller elephant backs off and moves to the side.

To learn more about elephants check out our Four Elephant Facts article.