Spotted hyenas are one of the most misunderstood predators in the world. They have a reputation of being vicious animals, ugly scavengers, and lazy hunters. Truth to be told, the spotted hyena is one of the most fascinating of all African predators. From their greeting ceremonies, to their care of the young, and don’t forget the incredible female “penis”, there are some interesting facts about hyenas that will blow your mind!

In this article we explain why we the spotted hyena is one of the most fascinating African predators and why we love them so much.

First of all, hyenas are cute! Just look at this guy taking a bath. 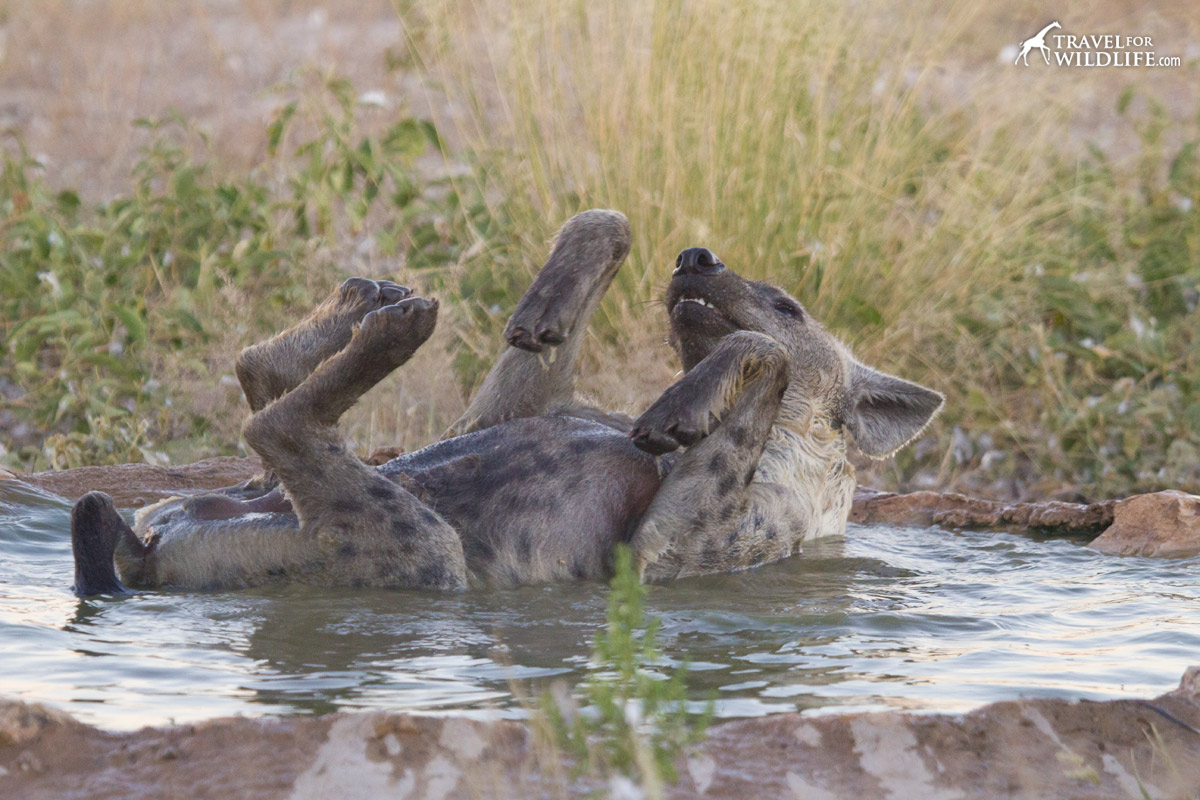 Spotted hyena taking a bath at a waterhole in the Kalahari

A group of hyenas is called a clan of hyenas, not a pack of hyenas. And the hyena society is a matriarchal one.

Females are larger and more aggressive than males due to increased levels of testosterone (sometimes higher than males) and control every aspect of social life within the clan. One of the byproducts of increased testosterone levels is the presence of a pseudopenis in females. The female hyena genitalia are almost indistinguishable from the male’s until puberty. Even the vaginal labia are fused, forming pseudotestes. 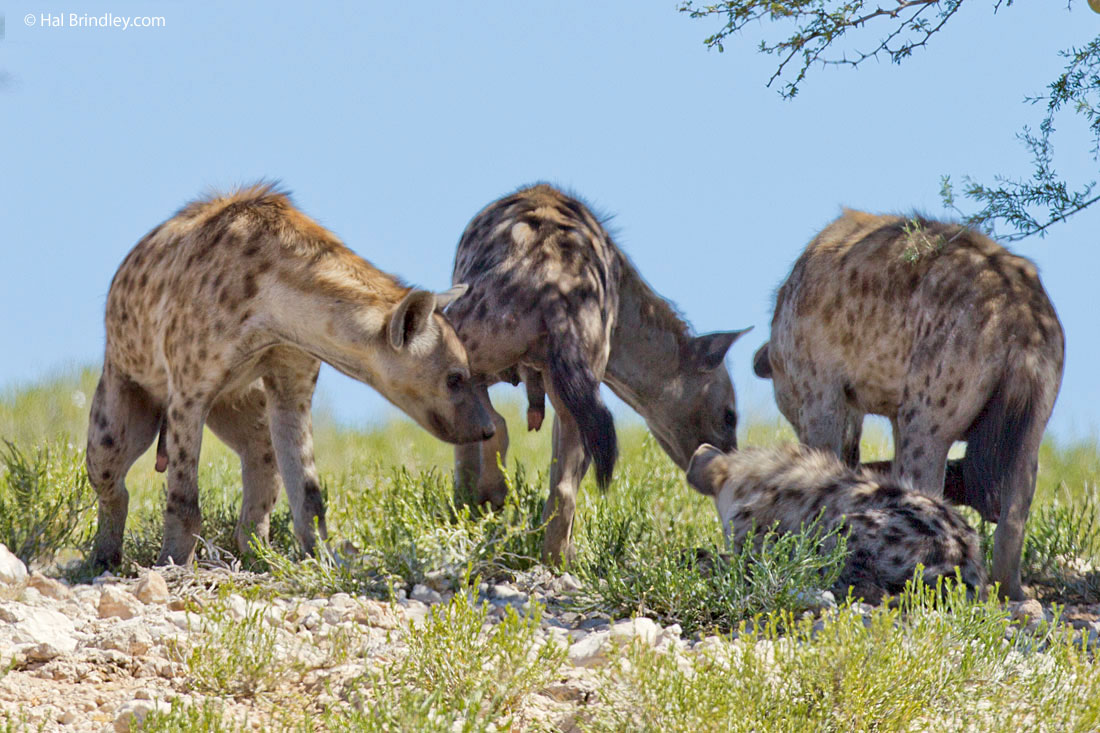 Spotted Hyena Birth …Through a Penis?

Having this extended clitoris (the pseudopenis) makes reproduction in the spotted hyena unique. During puberty, the vagina merges with the urethral duct to form a common urogenital tract that exits through the pseudopenis. With sexual maturity the urethral opening enlarges to about 15mm (see photo above). Hyenas actually give birth through the end of their pseudopenis! At the time of birth the phallus contracts and the cubs emerge tearing or lacerating the opening, creating a large bleeding wound that may take weeks to heal. Not very pleasant, huh?

Are hyenas dogs? Are hyenas cats? What are hyenas?

Even though hyenas possess dog-like features they are more closely related to cats, and closer still to civets and mongooses.  In fact, they belong to their own family the Hyaenidae. The other members of this family are the striped hyena (Hyaena hyaena), the brown hyena (Parahyaena brunnea) and the aardwolf (Proteles cristata). 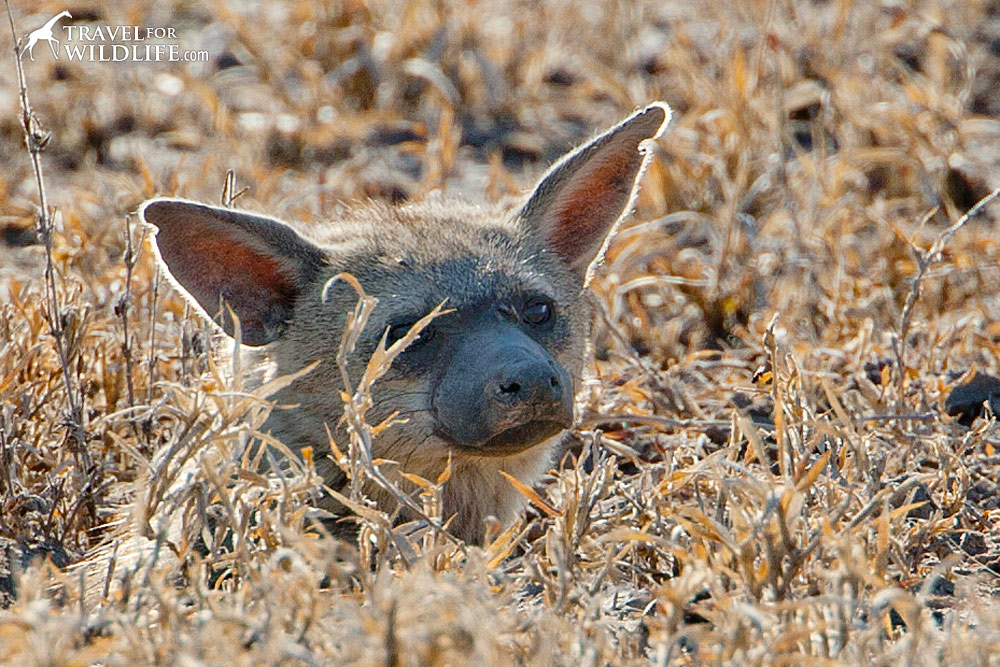 The aardwolf is also a member of the Hyaenidae family

The spotted hyena has a unique greeting ceremony. It features mutual examination, sniffing and licking of the genital area and extended phallus or pseudopenis. During the ceremony, the animals stand head to tail with one hind leg lifted, and may balance that way for up to a minute.

The hyena that begins the greeting is often lower in the dominance hierarchy. Its function is to maintain bonds within the group hierarchy.

Cubs as young as four weeks can erect their penis or pseudopenis and engage in this ceremony.

The common perception of hyenas being cowardly scavengers surviving off the kills of lions is just not true. Hyenas are one of the most proficient predators, often hunting in coordinated packs. In some populations, lions scavenge more from hyena kills than vice versa.

What do hyenas eat?

Even though they may kill up to 95% of their food, they are also very successful scavengers due to their ability to eat and digest almost anything. They are one of the only animals with jaws and teeth powerful enough to crush bones and skulls. Their impressive digestive system is capable of digesting bones and even teeth within hours.

Hair is practically the only animal product that they cannot digest. This problem is solved by disgorging hairballs, along with pieces of hooves, grass and small bone and horn fragments. 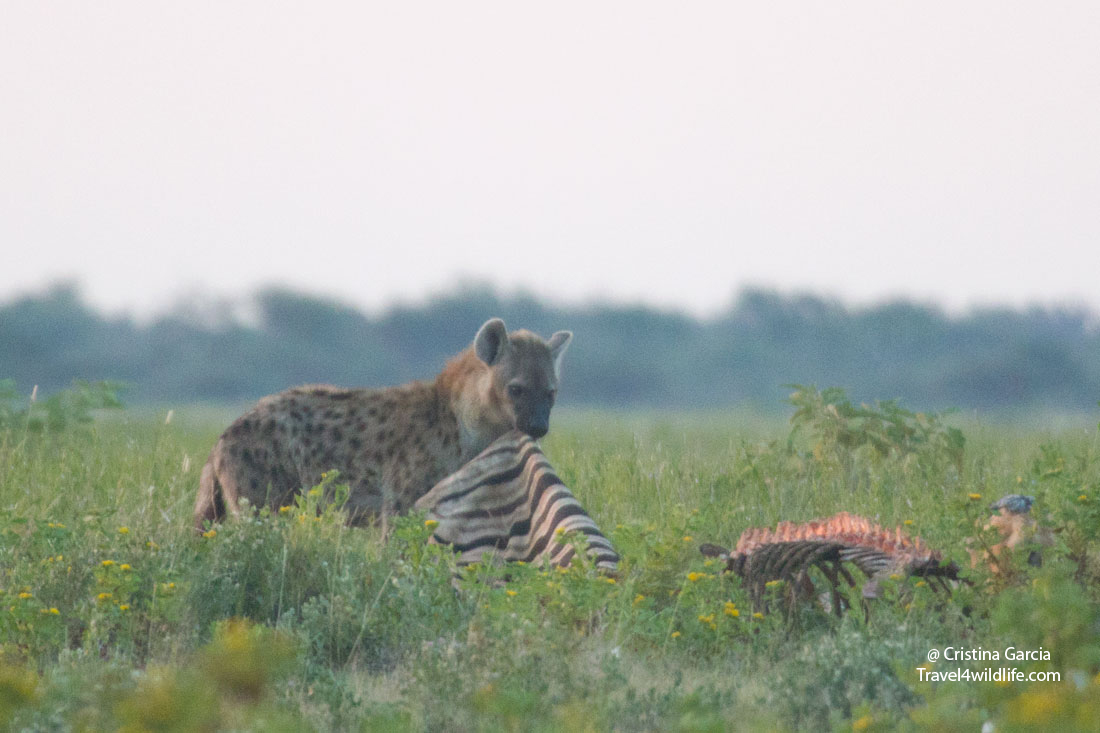 Spotted hyena (Crocuta crocuta) eating the skin of a zebra

Where to see Spotted Hyenas

Here’s a list of our favorite places to watch spotted hyenas in the wild.

Want to learn more about hyenas? Check out the IUCN Hyaena Specialist Group website for more information and conservation status of hyenas: